Butterfish is one of the strangest restaurants to open lately. To say it specializes in sushi is an understatement — in fact, sushi is all it sells. To anyone who's seen Jiro Dreams of Sushi — and what sushi fan hasn't? — this sort of focus is common in Tokyo, but rare in New York, where even the most ardent sushi restaurant also commonly provides teriyaki, tempura, and a range of other appetizers and entrees. The founder and owner is Hitoshi Fujita, who previously worked for 12 years at Sushiden, a pair of fairly well-regarded sushi spots in Midtown that are part of a much larger Japanese chain. He originally trained in Tokyo. 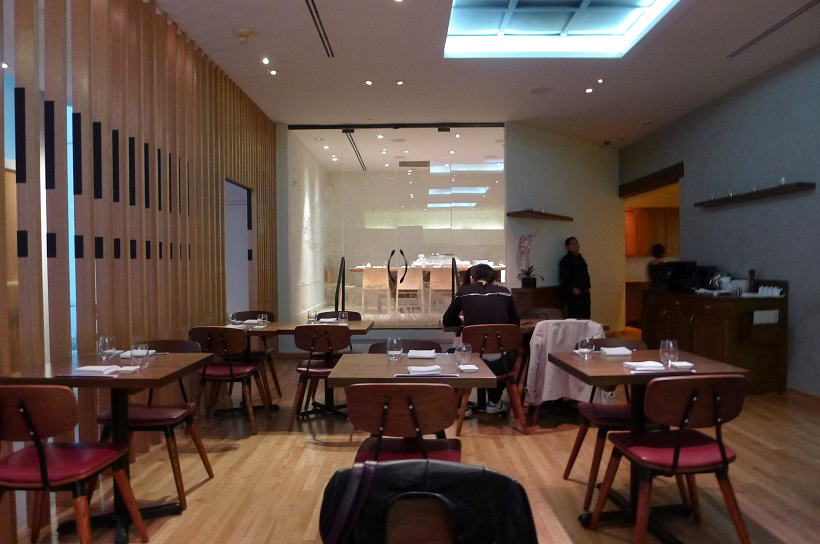 Besides the limitations of the menu, other unusual features of Butterfish include its location. The place is carved out of the hulking lobby of the Sony Tower at 56th and Madison, which turns into a dark and cheerless dungeon in the evening after the office workers have scattered. Heralded by a terse blue neon sign and little else, Butterfish is sparsely decorated and seats 90, with a communal table right in the window, a large central seating area with tables, and three aquarium-like private rooms, one of which is raised up and more brightly lit, as if waiting for the Council of Sushi Superheroes to arrive. In it Hitoshi offers two seatings for a $95 sushi meal per evening. 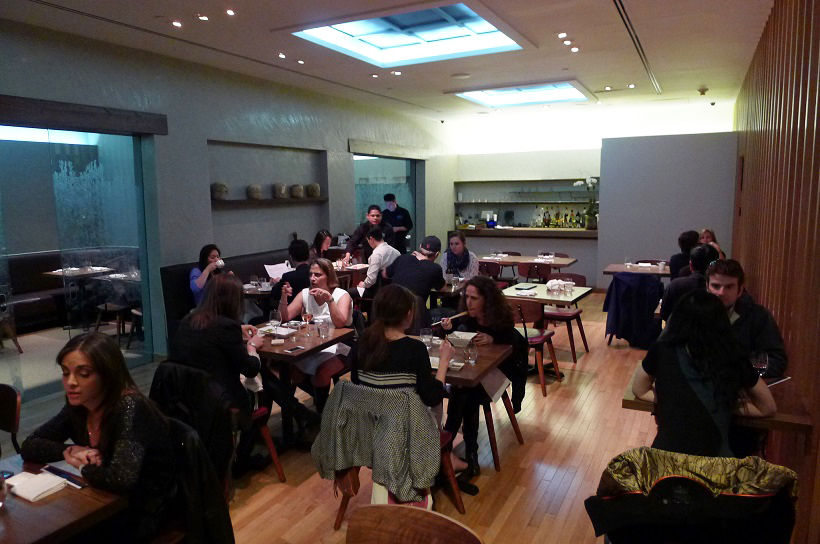 Apart from those, the menu lists five set meals named after Japanese municipal divisions, but having little to do with them, and a selection of 31 individual pieces of sushi priced from $3.50 for salmon to $9 for otoro, the fattiest tuna. And, man is it fatty! It melts in your mouth like…butter, which is what Hitoshi had in mind when he came up with the name Butterfish.

In common with other notable sushi impresarios, Hitoshi has some unique notions of his own. His fish filets are cut thinner and wider than most, which means a broader expanse of flesh hits the tongue initially; the actual volume of fish per piece is just about the same as usual. He likes searing fish. Most unusual of all, he uses his sushi rice while still warm. By his method, individual grains of rice don't cohere quite as well with other grains, and you end up with lots of it stuck to your fingers. No matter, the fish is unimpeachably fresh. That includes every piece a companion and I tried. 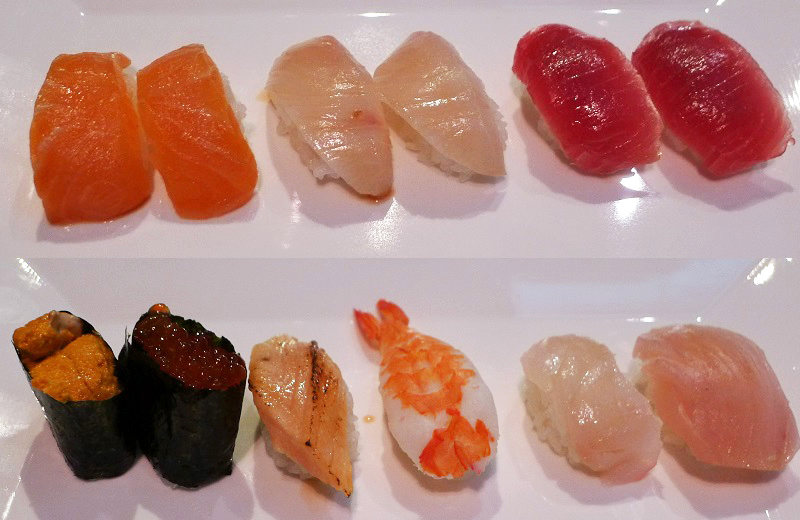 [Tokyo assortment]
Foremost of the assortments (I wouldn't really call them omakases) is the Tokyo, which consists of a welcoming bowl of edamame, a sashimi of the day (in this case, sliced tuna in a cool soy broth with scallions sprinkled on top), nine pieces of nigiri sushi delivered in two separate rafts, and a farewell handroll containing a nice wad of crabmeat, but not very pretty to look at. At $42 for the Tokyo, the price is slightly less than you might get at one of the better Japanese restaurants in the East Village for a premium assortment. 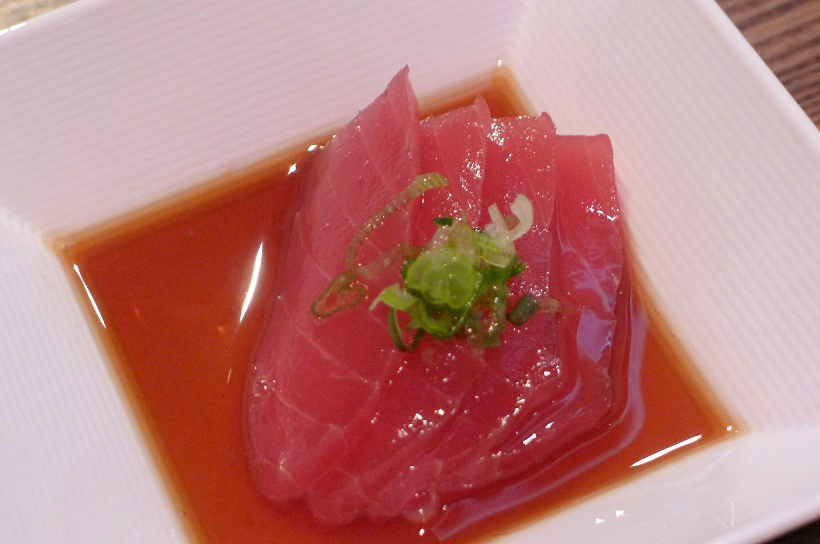 Another of Butterfish's oddnesses will strike as you sit waiting for your first course — there's no sushi counter or sushi chefs visible anywhere. In other words, the sushi is prepared somewhere in an invisible kitchen and brought out to you. This lack of prep discernibility deprives you of one of the pleasures of eating sushi — watching it being made, and also having a chance to examine the fish before ordering. It also contributes to the restaurant's sense of bare-bones austerity. 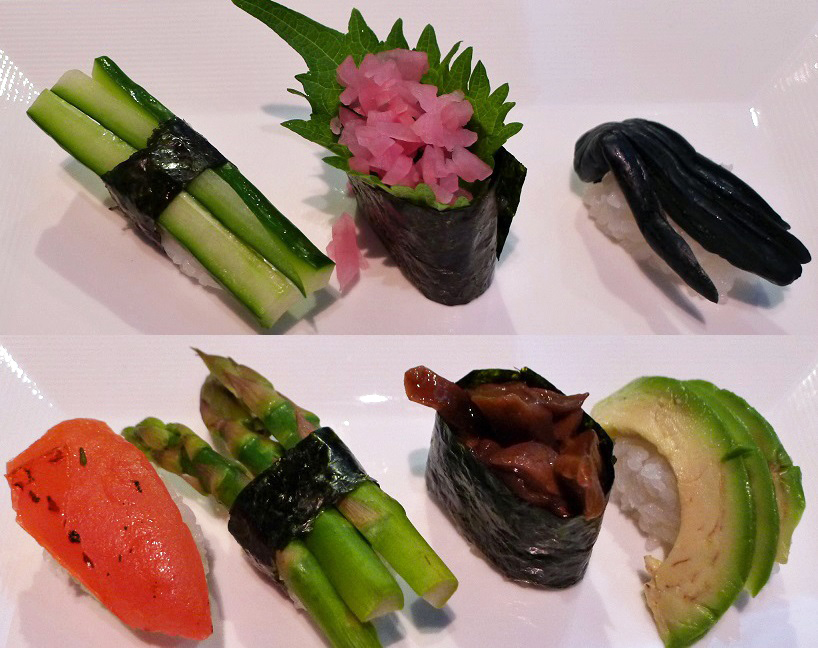 While the Tokyo was fantastic, the vegetarian sushi meal called Akita — named after a prefecture in Honshu, far north on Japan's main island, where the dog breed also comes from — was mind-boggling. Priced at $20, it rivals in artistry any other vegetarian meal in town. Pickled eggplant is carved like the blackened hand of Yoda, while a seared piece of plum tomato that's a dead-ringer for tuna develops a wonderfully smoky flavor. Eat Akita (the sushi assortment, not the dog), and you'll never miss the fish. Really.

Butterfish has been offering Gilt deals lately, which have filled the restaurant up around 8 p.m. each evening, but they are no guarantee of longevity. The place is clearly a maverick operation, but a welcome one that adds much to the city's sushi terrain. And it provides an opportunity to sample top-quality fish at a relative discount.

Draft beer, sake by the glass and by the bottle, and shots of hard liquor (no mixed drinks) make up most of the alcohol menu.