The Modern Slashes Its Tasting Menu. So Have Others.

Share All sharing options for: The Modern Slashes Its Tasting Menu. So Have Others.

In this era of rising food prices and tasting menus with ever-increasing course counts, Danny Meyer did something quite different last week. He lowered the entry-level price of dinner at The Modern and he shaved the tasting menu down to five courses.

It all makes sense if you consider that not a single Meyer restaurant is serving a menu longer than six courses, suggesting that the hospitality guru sees more opportunities in slightly less time-consuming (if not entirely less expensive) forms of fine dining. He might be right.

That's another way of saying that you won't see anything like Noma opening up from Meyer's Union Square Hospitality Group anytime soon, nor will you see as much from any of Meyer's peers either, I'll argue.

Still. The Modern, at 10 years old, seems like an unlikely candidate for such changes; it's one of USHG's most highly-trafficked restaurants, attracting more patrons every day than Gramercy Tavern, Maialino, Union Square Cafe, or North End Grill. That said, the restaurant's old eight-course tasting, priced at $155, and taking anywhere from three to three-and-a-half hours to complete, had been a tougher sell.

So Abram Bissell, The Modern's new chef, last week replaced the tasting with a five-course option that's closer in style (and price) to a shorter prix fixe. It's designed to be finished anywhere from two to two-and-a-half hours, and costs $128, which is $7 less than what a wine pairing cost under the old format.

Sagaria: "The chef's tasting menu was really handcuffing our guests."

"When the restaurant debuted, that's when we were at the height of fine dining. Per Se just opened, and there were all those long tasting menus. And we saw over time, what was moving, what wasn't moving," said Sabato Sagaria, Danny Meyer's chief restaurant officer, during a phone interview. "The chef's tasting menu was really handcuffing our guests. So we shortened that menu."

The Michelin-starred venue has also introduced a shorter, three-course option at dinner for $98. The four-course menu, the most popular offering, remains at $108. "We're really just trying to listen to what the guests are saying, which has dictated some of the changes we have made on the menu so far," Sagaria said. 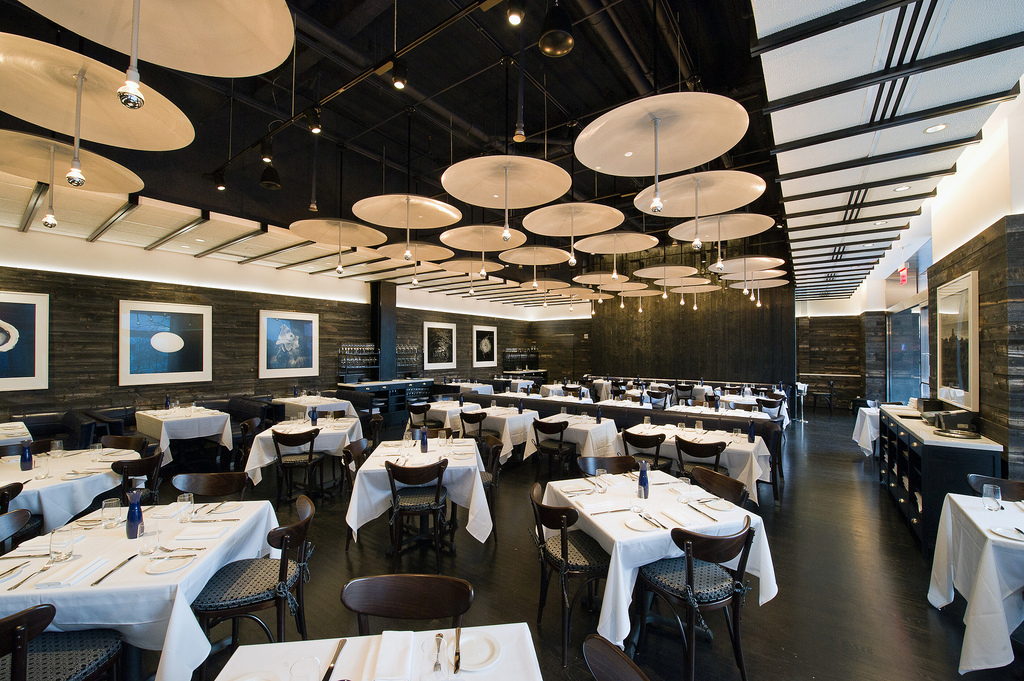 [North End Grill by Krieger]
The Modern isn't the first Danny Meyer restaurant to rethink a tasting menu. North End Grill, located just around the block from the headquarters of Goldman Sachs (and its well-compensated employees), axed its $85 tasting option last year. "We found that many of our guests didn't necessarily use our restaurant in that way," said Jee Won Park, a spokesperson for USHG, while adding that chef Floyd Cardoz can still do longer set menus upon request.

There's never been a better time to spend $1K on a dinner date, if you have $1K to spend.

In the half decade since the collapse of Bear Stearns and Lehman Brothers that helped trigger the deepest U.S. economic downturn since the Great Depression, we've seen the following ambitious no-choice or low-choice venues open to critical acclaim: Alma, Saison, Benu, Blanca, The Chef's table at Brooklyn Fare, Atelier Crenn, Grace, Next, Atera, Forage, Catbird Seat, Elizabeth, Keiko à Nob Hill, and more. Really, there's never been a better time in America to spend $1,000 on a dinner date, if you have $1,000 to spend on a dinner date.

But it's worth noting that almost none of these new tasting menu-only venues belong to larger restaurant groups with four or more venues to their name. Perhaps that says something about the relatively slim profit margins of ultra-high-end dining. Virtually none of the more established players, with large cash coffers and accomplished staffs, are opening up restaurants serving 10 or more courses — though one must credit Lettuce Entertain You's Richard Melman for being an outlier. The Chicago-based restaurateur, with well over 70 venues to his name, opened L2O in 2009 and the seafood palace now serves a proper 13-courser for $210.

Momofuku's David Chang is another big exception. He might be the only chef anywhere in the world to have opened up three new tasting menu spots since 2008 — Momofuku Ko in New York, Shoto in Toronto and Seiobo in Sydney.

Is David Chang the only chef to have opened up three new tasting menu spots since 2008?

Perhaps we'll see more of these chef's table restaurants as young chefs like Iliana Regan (Elizabeth) and Corey Lee (Benu) expand their empires. Or perhaps not.

Not everyone wants a meal that lasts as long as an extended version of Lord of The Rings — at least not every day, even among those with the deepest pockets. 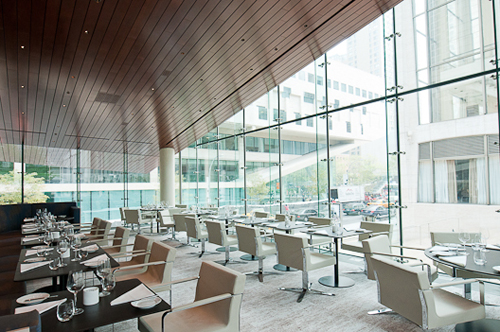 [Lincoln by Krieger]
Jonathan Benno, who learned a thing or two about four hour meals as the longtime chef de cuisine at Thomas Keller's Per Se, opened Lincoln Ristorante in 2010 with a serious tasting menu that would soon rise to $120. Turns out theater goers preferred his à la carte offerings. It didn't take long for Benno to drop the longer option.

"I accept that Lincoln will never be a chef's tasting menu restaurant," Benno said during a phone interview. "Before 8 p.m., people are reluctant to drink and eat a significant amount before they sit down to a four-hour opera." Lincoln eventually switched to a four-course option for $75. And just like The Modern, Benno added a new three-course prix fixe at dinner last week for $60.

And The NoMad, by Meyer's proteges Daniel Humm and Will Guidara, eliminated a $125 "family styling" tasting menu not too long after this critic lambasted that menu's concept and execution.

Benno: "I accept that Lincoln will never be a chef's tasting menu restaurant."

The Manhattan hot spot went back to à la carte only while Humm and Guidara's three-Michelin starred sister spot, Eleven Madison Park, focused on longer tastings, now priced at $225 per person and booked a month out — rightly so.

So this isn't a story about the downfall of tasting menus. We'll actually see more of those now that Cesar Ramirez and other chefs, young and old, feel comfortable serving 30-course meals in more affordably stripped down settings that are a far ways from Per Se. Ramirez's Brooklyn Fare, after all, is set in an industrial albeit elegant open kitchen. And this isn't a story about diners who want to spend oodles less; we can trust that the bankers populating North End Grill certainly could've afforded the $85 tasting. No one's using Groupons to buy The NoMad's $79 chicken.

"There's always going to be the Per Ses and the Eleven Madison Parks and the Brooklyn Fares. Those are destination restaurants," said Benno. "And for the rest of fine dining restaurants in New York," he added, there are patrons who "eat out six to seven nights a week, either as business or entertaining or pure enjoyment...These people are conscious of how long they spend at the table."
· Tyranny of The Tasting Menu Debate [~ENA~]