1) Upper West Side: Baconery Cafe, a bacon-themed bakery, closed its Columbus Avenue shop at the end of the year. A note in the window tells customers that it will continue to sell its chocolate-covered bacon strips, bacon cookies, and the like online, and that the owners are currently on the lookout for a smaller space to reopen. 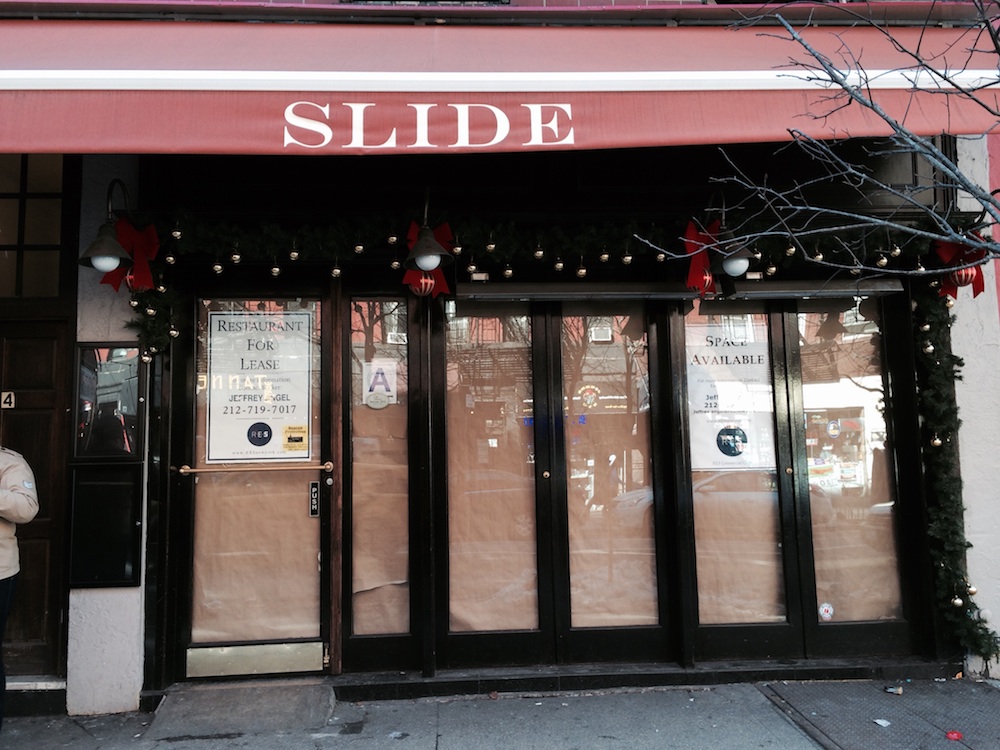 [Photo by Nick Solares]
2) West Village: Slide, the gourmet slider-centric spot with a rock garden out back, shuttered some time early this year. There's no explanation online, but when a fan on Facebook asked whether the restaurant was still open, the response was simply "No."

3) Park Slope: Parco, a tiny 7th Avenue coffee shop that was a neighborhood favorite has shuttered under tragic circumstances. According to a note in the window, the closure is due to "the sudden passing of our friend Alex, the proprietor of our beloved hangout. As one regular tells Fucked in Park Slope: "[F]or over a decade, the quiet Italian man provided homemade carrot dog biscuits to our very dog friendly neighborhood, and kept us coming back for more. Many coffee shops have cropped up on 7th, but none held a candle to this oldie." [FiPS]

4) Lower East Side: Links, the sausage-centric restaurant on Allen Street shuttered about a month ago. Bowery Boogie suspects that a lack of business was to blame, but hears word that a grilled cheese-only joint will take over the space. [BB]

5) East Village: After 15 years in business, the Avenue A location of San Loco has shuttered. The three other locations of the Mexican spot are still open on Second Avenue, Stanton Street, and North 4th Street in Williamsburg. [EVG]

6) Astoria: Bistro 33 closed a couple of weeks ago, but We Heart Astoria reports that the owners plan to revamp the space and turn it into an entirely new restaurant. No word yet on exactly what that new place will be, but a note on the restaurant's Facebook page says the owner is planning on something with "a more friendly bar atmosphere." [We Heart Astoria via Q'Stoner]

7) Tribeca: Dean's Pizzeria & Restaurant has now closed, according to Tribeca Citizen. Supposedly opening in its place is Hawaii Cupcake Factory, which may be New York's first and only Hawaiian-themed cupcake parlor/pizzeria/Caribbean-American fine dining restaurant. Although as Tribeca Citizen points out, the website no longer makes any mention of pizza or of "the Caribbean version of Turducken." [TC]

8) Rego Park: Joe Abbracciamento, a 60-plus year-old red sauce Italian restaurant closed last weekend. It's a neighborhood icon that once served John F. Kennedy, but now DNAinfo reports that the owners, who are the second generation of Abbracciamentos, have decided to sell the place and retire. [DNAinfo]

9) West Village: The Carmine Street outpost of Yama has shuttered. The Seamless account is no longer active, and a tipster sends word that the windows are papered over with a "For Rent" sign posted. The other outposts of Yama, near Union Square and at 59th Street, remain open.

10) Lower East Side: Earlier this week an eviction notice appeared on the door of Orchard Street Jamaican spot Spur Tree. The restaurant is currently shuttered, but Bowery Boogie points to a message on its Facebook page, which says the owners are currently looking for a new space. [BB]

11) Greenpoint: Bread for the Eater, which the Cheeky Sandwiches team opened just this past November, apparently shuttered very soon after. Greenpointers hears from the owner that one of the partners backed out of the project, and now may have to go to court over unresolved issues with the lease. Greenpointers also notes the Cafe Pistachio, a year-old Turkish cafe, closed in the past few weeks. [Greenpointers]