Fredrik Berselius on Aska's First Year and the Road Ahead

Share All sharing options for: Fredrik Berselius on Aska's First Year and the Road Ahead 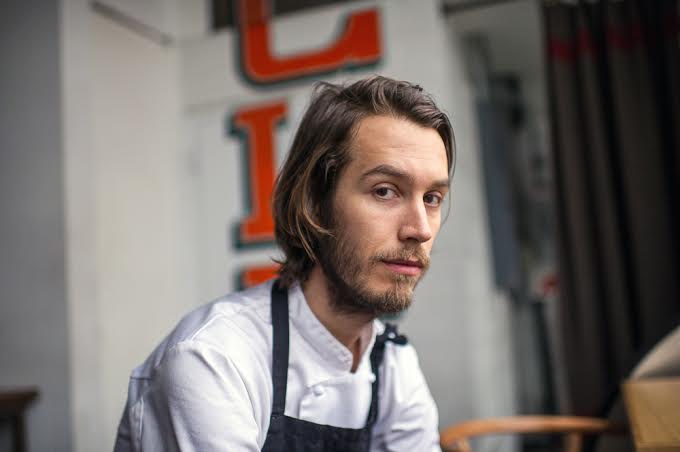 [Photo: Daniel Krieger]
A little over a year ago, chef Fredrik Berselius opened Aska, a tiny tasting-menu-only restaurant at the back of Williamsburg's Kinfolk Studios. It replaced Frej, the hugely popular pop-up he had helped run in the same space the previous year. Berselius, who himself is Swedish, kept the Nordic leanings of Frej, but the tasting menu was slightly longer and the cooking all his own. Now, a year and some months in, Aska continues to garner a steady stream of praise, including a Michelin star and a James Beard Award semifinalist nomination.

Berselius is hesitant to talk about his intentions and his goals for Aska, and says the phrases he's used all along to describe his cooking philosophy feel worn out by now. He gets frustrated trying to explain the experience he wants to create with talk of "seasonal ingredients" and "getting better." But that hesitance makes it clear how very seriously he does take those things. In the interview below, the chef discusses those intentions, plus the review process, why he likes to serve guests himself, and what he hopes for in year two.

Why did you want to open Aska? Why move from a pop-up like Frej to a real restaurant?
The idea was always to open a restaurant. Food is a personal thing, and what we do every day has to reflect that. Food so often, to me, comes back to memories. When you work with food all day, all these memories show up all the time. I wanted to open a restaurant because I wanted to look at food from my perspective. I just want to cook in a way that I like to eat, and for it to somehow reflect where I'm from, and also where we are. Somehow you want to share an experience. Nothing makes me happier than when guests are happy. You hopefully take care of them, or give them an experience, and then they give something back. That's why you open it.

What is your goal with Aska?
The philosophy that we want to have here is to see what's around us, see what's available. We're looking at ingredients that are seasonal but that also mean something to us. I want to cook in a way that reflects what's going on in our heads in the kitchen, and what we talk about every day, where we come from. There has to be more dimension to it than just the ingredients, or what's on that plate. I always want the whole experience to be part of the eating.

How was the review process? I remember when you talked to Eater a few months after opening you were a little frustrated with it.
The review process is the weirdest thing. People coming in and sharing their opinion on everything. Now we're in a better place. Now people coming in know what they're expecting. But I just didn't know how the whole thing worked. When I talked [to Eater] last year, I pointed out that they came very quickly, and they decided this is what it would be like for the next 10 years. But we're constantly evolving and changing, all the time. It takes time for restaurants to get in a rhythm. 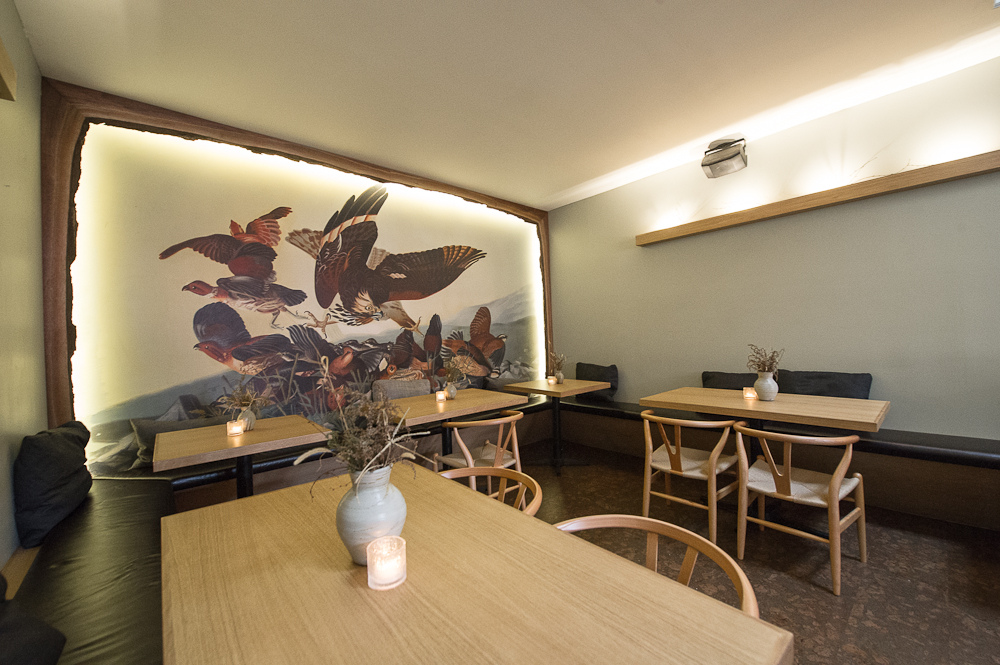 You and the other chefs come out into the dining room to serve some of the dishes, which is still relatively uncommon in New York. Why did you decide to do that?
It's being done very much in Scandinavia, and we did it back at Frej. It's nice for the kitchen to know who they serve the food to. Again, it's about that connection with the guest. Letting us know who we serve food to helps to actually make it more honest.

It's unique for a restaurant like Aska to be housed inside of something like Kinfolk Studios. What are the pros and cons of that arrangement?
Basically the space changes every four hours into something else. It's a cafe during the daytime, we do the Aska menu in the back in the evening, then it's a party. There are so many different people under this roof. There are artists, DJs, bike builders, so many people walking through the space on a daily basis, which has its pros and has difficult sides to it. Whereas most of the people in the kitchen come from a fine dining background and are used to working long hours, other people are more relaxed and sometimes they clash.

What are your goals for the coming year?
We still want to do a better job every day. We want to learn more about food, we want to learn about how to serve our guests better. We want to not stagnate, to keep moving forward. It sounds so easy, but we have to find a better way to express ourselves through the food. It's not just about getting a more expensive cut of meat on the plates. That doesn't really have anything to do with it. But then I don't know if it's too big an undertaking.

Are you happy with what you've accomplished in the first year?
It's been an amazing year. It's more than I could ever have hoped for, to be honest, in so many ways. But it's like...that's not good enough. I just want to make it better, make it more genuine. I know that we have a lot of things to work on, and I know that we have so much more that we can do. I'm so proud of the guys and the girls that I've been working with, but there's something we still have to do and we're not there yet. We can't go backwards. You have to always have a good day, and then you have to make it better. And then you have to make that day better. This year has gone by so quickly, that I haven't really had time to reflect on it. I haven't looked back, and I honestly want to keep looking forward.
· All Coverage of Aska [~ENY~]