Bar Bolonat occupies a three-story Civil War-era structure at the corner of 12th and Hudson Streets, one of a row of stately buildings that march down toward the river, reminding you that the West Village was once its own port on the Hudson. The structure — deeper than it is wide, with a porch extension that provides the restaurant with extra seating — held a succession of bad but inexpensive Thai restaurants for nearly two decades. That period ended when Kobma closed three years ago. Since then the ground floor has yawned empty, waiting for a tenant willing to pay the sky-high commercial rents that now characterize the neighborhood. (Two more long-empty restaurant spaces lie directly to its north.)

A much-ballyhooed new sibling of Taim and Balaboosta, Bar Bolonat is that tenant. The build-out of the space is surprisingly spare, with a poured-concrete floor, white-painted brick and black-painted clapboard walls, and ceramic tiles above the bricks that are the sole Middle Eastern design element. Tables, some with banquettes upholstered with fabric that looks like blue mattress ticking, form a horseshoe around a small square bar. The room seats perhaps 50, with a party room downstairs that holds another 20.

At the helm is the tremendously talented Einat Admony, an Israeli-born chef with a Sephardic background who seeks to refine and extend the polyglot Jewish diaspora cuisine of Israel, which includes North African, Eastern European, Yemenite, Turkish, and Persian, as well as Middle Eastern Arab, Christian, and Jewish elements. Her cooking might also be described as elevated peasant, which comes by its comfort-food aspects honestly and effortlessly. As I found when I dined there with a couple of pals this last Friday at 5:30 p.m. (the only time available over the phone), the food is instantly likable, though more expensive than we might have wished. (Total for six shared dishes plus two desserts with three glasses of wine: $193.25, pre-tip.) 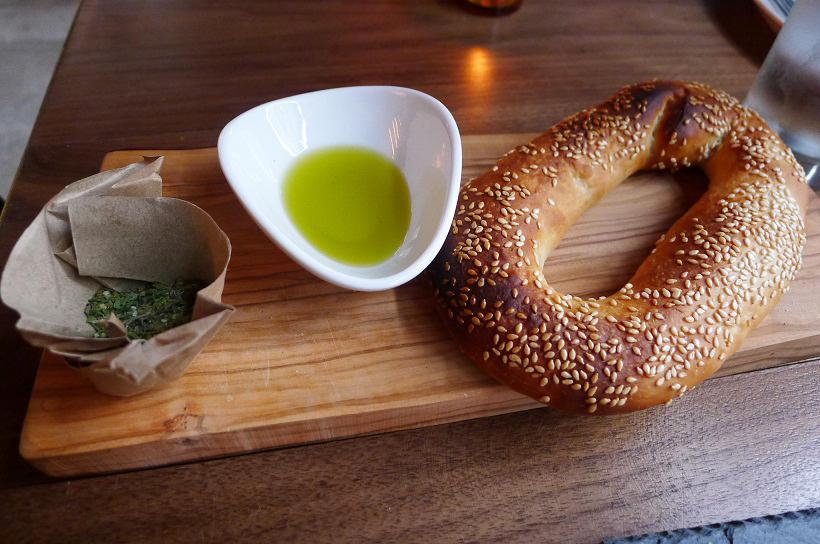 [Israeli bagel]
The name of the place is Israeli slang for something like "to the point," but Admony also told the Jewish Daily Forward last year that it puns on the first restaurant she worked at when she arrived in New York: Bolo. The savory menu at Bolonat is divided into three areas by dish size, though this is not a hard-and-fast rule. Most spectacular in the first section is the Israeli bagel ($6): an oblong ring of bread burnished to a golden color, scattered with sesame seeds, and served warm with a small bowl of green olive oil and a tiny brown sack of the spice mixture za'atar. Dip, dip, chew. The app is delightful, and instantly establishes a strong sense of hospitality on the part of the chef. 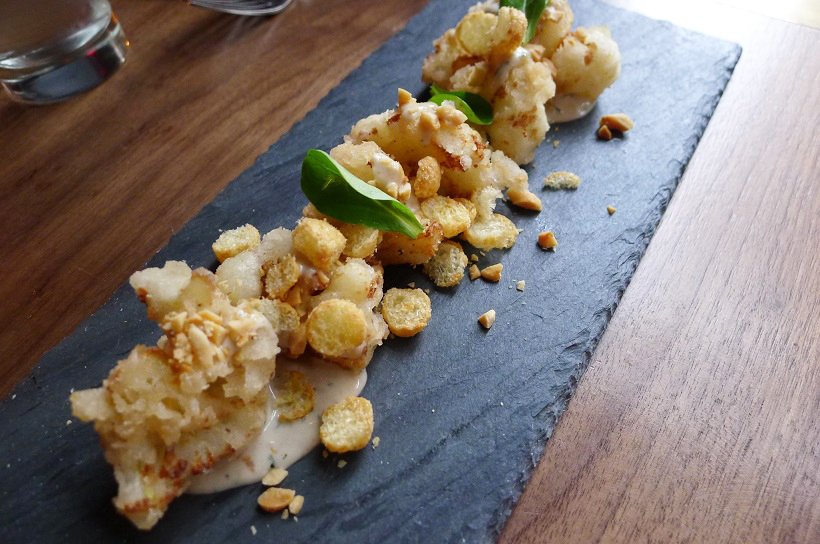 [Everyday cauliflower]
In the same section find a boat of fried olives, a dish borrowed from Balaboosta, and "everyday cauliflower" ($9), crunchy and squishy nut-crusted flowerets lounging in a pool of novel peanut tahini. This gal can cook! 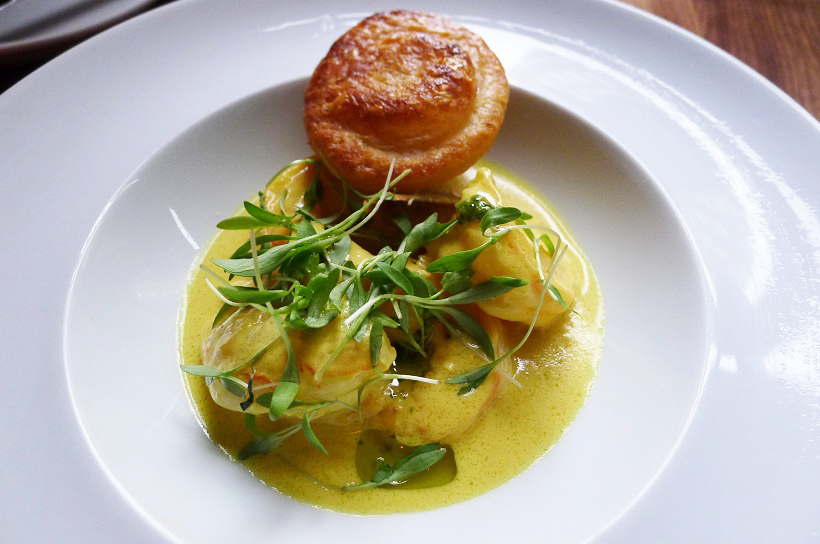 [Shrimp in Yemenite curry]
Our strategy was to select two dishes from each section, and from the middle region we picked shrimp in Yemenite curry ($17). With its fenugreek emulsions and chile-zapped papaya sauces, the cooking of Yemen revolutionized the Israeli menu when it arrived with airlifted refugees in 1950. Admony sums up the flavors in this one dish, but the result, while delicious, is conceptually flawed. "This tastes more like Thai food," noted a friend from El Paso who recently returned from a long assignment in China. The bowl of what amounts to sweet curry wears a very small badge of bread on its bosom — the buttery, multi-layered malawach — and boasts but four shrimp, which makes the serving seem puny. Add a couple more shrimp and make the bread bigger, please! 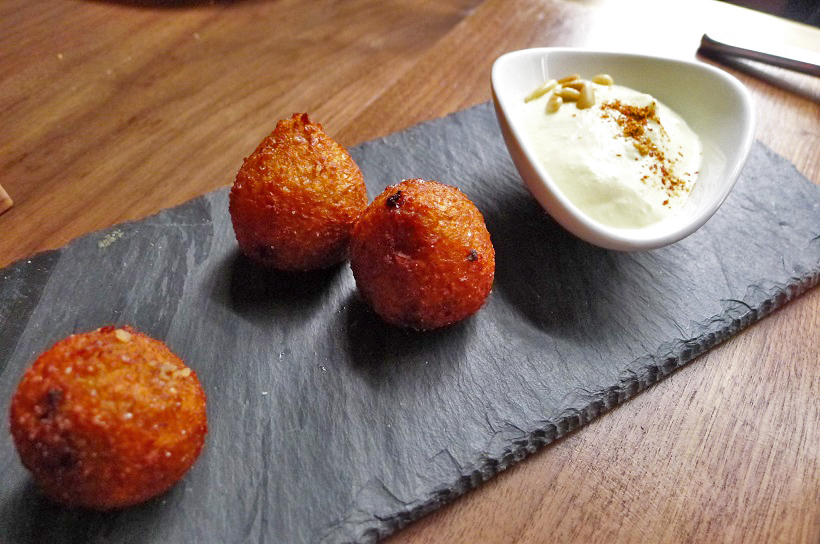 [Kibbe]
We also loved the teardrop-shaped kibbe served with lemon yogurt, and admired its thin cracked-wheat coating — but it too represented a small serving for the price ($15). 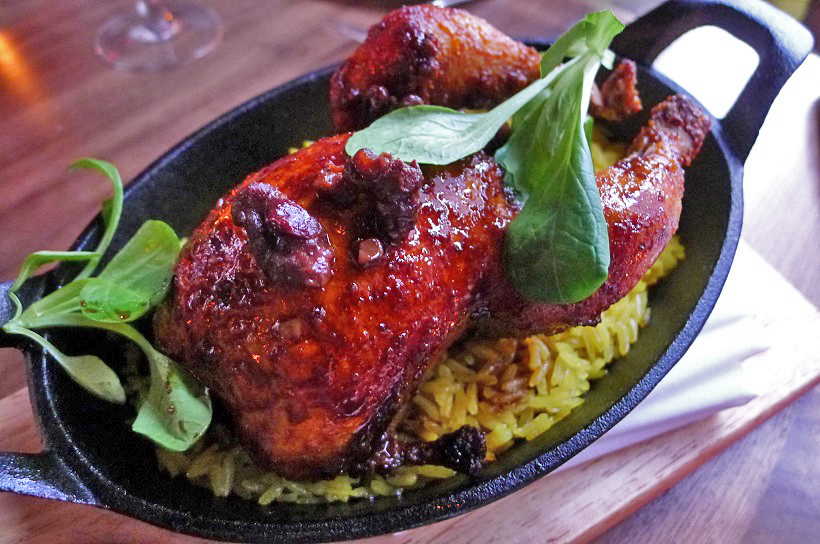 Clearly, if you're trying to save a bit of cash at Bar Bolonat, steer toward sections 1 and 3, and skip section 2. The full-blown entrees of the last division include plenty of starch in addition to protein, and we found that two choices left three diners completely satisfied. Poussin ($32) represents the chef's spin on Circassian chicken, a walnut-decorated bird glazed with pomegranate sauce and so perfectly cooked that the skin remains crisp while much of the flesh slides off the bone. The bird rests on some very yellow Persian chelo rice that absorbs the clash of flavors. Getting the last morsels of poultry off the tiny bones will be a challenge. 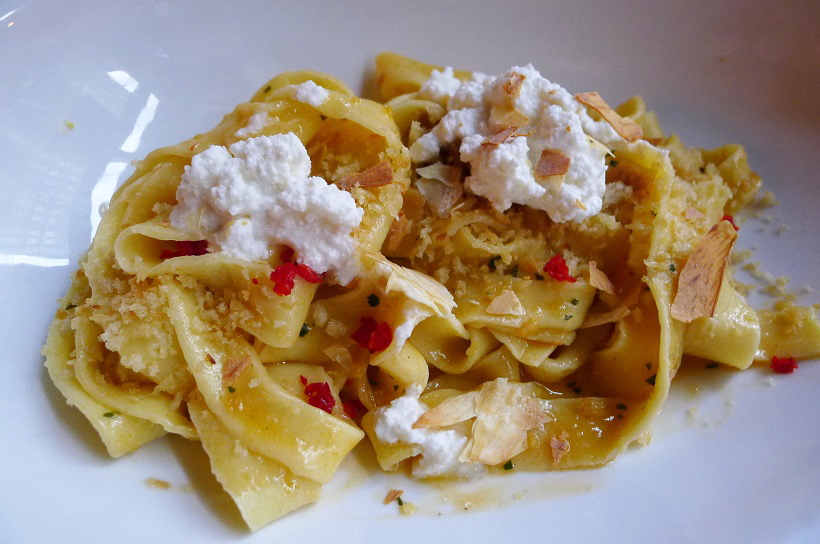 [Pasta]
Every bit as good was a serving of pasta in broad festive ribbons splotched with homemade ricotta. The noodles are oily, lemony, and very filling.

Only three desserts are offered; the two we tried fell short of the savory dishes. The chocolate falafel tasted a little too much like falafel, which interfered with its chocolate punch. In another dessert, the small rhombuses of baklava failed to furnish the expected sweetness of honey, though the mint ice cream alongside, served in a red Moroccan tea glass, was pungently fantastic.

A handful of wines are available by the glass, priced from $12 to $16, the last for a stem of 2008 Meishar #41, a very distinguished Israeli cab/shiraz/merlot blend. You can get a bottle for $68; the lowest online price I found for the same bottle was $23.95. Five strong cocktails are available at $13 each, and they tend to be spins on classics with extra fruit dimensions.

Dining a first time at Bar Bolonat in its opening days proved a thoroughly enjoyable experience, though it's hard to dispel the notion that the food is a little too expensive for what is basically reconfigured Middle Eastern everyday fare, and the price point may prevent me from eating there as often as I'd like. Nevertheless, with its emphasis on fresh vegetables, and food that's already at least partly familiar to New Yorkers, the place is going to be a huge hit.