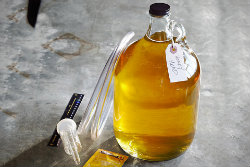 1) Moonlight Meadery on Fuhmentaboudit!
Mary Izett and Chris Cuzme talked to Michael Fairbrother of the New Hampshire-based Moonlight Meadery, a small batch mead distillery now distributing around the country, about how he pushed his garage hobby into the big leagues:

So I thought I could kinda keep the day job, thus the name Moonlight, because I was going to be working days and then nights at the meadery, but I did nothing other than win a few competitions as amateur for 2007-2009, and I told everybody about how I wanted to start this company in my garage, part-time at night. And I told Omar from Surly Brewing Company, and Omar looked at me and he changed my life with one sentence, and he said 'How can you possibly think you can do something you love part time?' 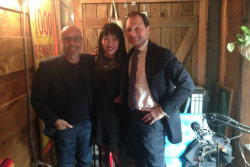 2) 30 Years on at the Gotham Grill:
Chef and Co-owner Alfred Portale and Brett Csencsitz of the Gotham Bar and Grill discuss the importance of enduring, committed staff at the restaurant as it hits 30 years in operation:

Sometimes I feel like we are starting over from scratch every single day, because you rely on so many different people to make the guests' experience a pleasing one and to make the restaurant run profitably and smoothly. 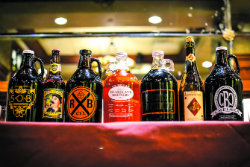 New York is a huge untapped market and what we're seeing now with these breweries open is the realization of that untapped market. There are 8.5 million people living in the city of New York, a lot of them are beer drinkers. 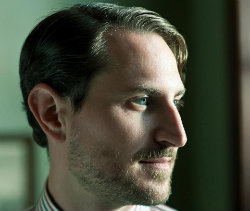 4) Joaquin Simo of Pouring Ribbons:
Prime Meats' beverage director Damon Boelte invited partner/bartender at Pouring Ribbons, Joaquin Simo to finally make the trek out to the HRN studio to reminisce over parallel spirit careers in the city. Here's Simo with some hiring notes:

I don't need this wannabe startender as part of my staff- this isn't an ego trip, it's about serving the guest. If you have an issue with carrying a tray, if you think that makes you 'less-than', then I don't need you on my staff. 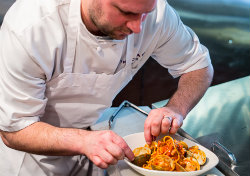