Sietsema's First Impressions of Narcissa and The Cleveland

Share All sharing options for: Sietsema's First Impressions of Narcissa and The Cleveland

Can anyone even remember how many celebrity chefs have dug their own graves at the serpentine dining rooms of The Standard East Village? In 2009, when the premises was still the Cooper Square Hotel, Wolfgang Puck disciple Govind Armstrong scuttled here from L.A. to open Table 8, which focused on small plates, flatbreads, and a "Salt Bar" showcasing exotic forms of NaCl. Plagued by noise complaints from angry neighbors in addition to lukewarm reviews, Armstrong was last seen washing out to sea clinging to a spar.

The next year Scott Conant, fresh from successes at L'Impero and Scarpetta, took a belly flop with Faustina, serving an ungainly combination of wine-bar fare, sushi, comfort food, and his usual catalog of pastas to an unappreciative audience of hotel guests and too-few destination diners, as the fate of the hotel teetered in the balance. Next, The Trilby occurred, and who remembers what chef helmed that kitchen?

Now John Fraser — of the Upper West Side's Dovetail — sticks his toe in the pond at Narcissa, with seasonal and vegetable-driven dishes, many sourced at an upstate farm that is itself a celebrity affair. (Among the livestock, or so the story goes, is a cow named Narcissa.) Fraser's inspirations at the new spot are clearly Gabrielle Hamilton's Prune and Amanda Cohen's Dirt Candy. After a first visit on a weekday evening around 9, when a companion and I found the place mobbed, I'd have to say the food is better – and better-conceived – than any of the previous establishments in that space. Will it succeed in the long run? That's a stormier question.

Certainly, Fraser still has the premises to contend with. Nobody likes the hotel, which leans precariously like a pile of glass bricks, besmirching what used to be one of the city's great historic squares. And any restaurant located there must struggle with a layout that feels like several disconnected restaurants in one. The main dining room is a jumble of wooden beams, zigzagging striped banquets and chairs, and mismatched light fixtures in several boxed-off little areas. It looks out onto that patio battle zone, focus of the earlier noise war. And the subterranean bathrooms are so remote from the restaurant that you're better off holding it till you get home. 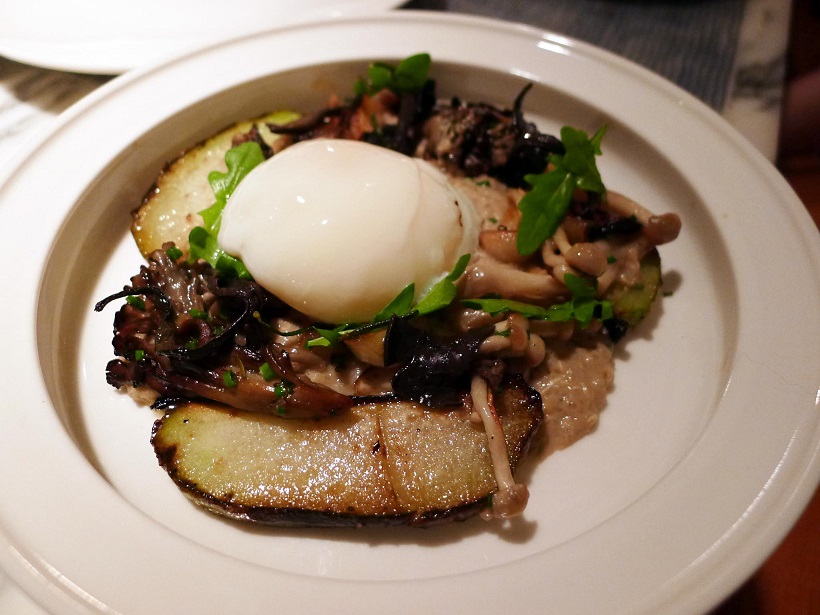 [Farm egg]
The best seating is in what was once a barroom, with open kitchens along two sides staffed with a dozen cooks. Counters and raised tables give a good view of the action. But the high stools are oddly padded with a pair of cushions — one for each buttock — and a deep groove in the middle. If you're a guy, it's nice knowing your prostate is being watched out for. Still, no one would accuse these accommodations of being the least bit comfortable — you feel as if you're just perching. But the chefs at work are well worth admiring as you dig into the poached farm egg ($14), which sits giddily upon a warm collection of "forest mushrooms," slices of seared chayote, and baby arugula. An unexpected combo, but one that delighted. 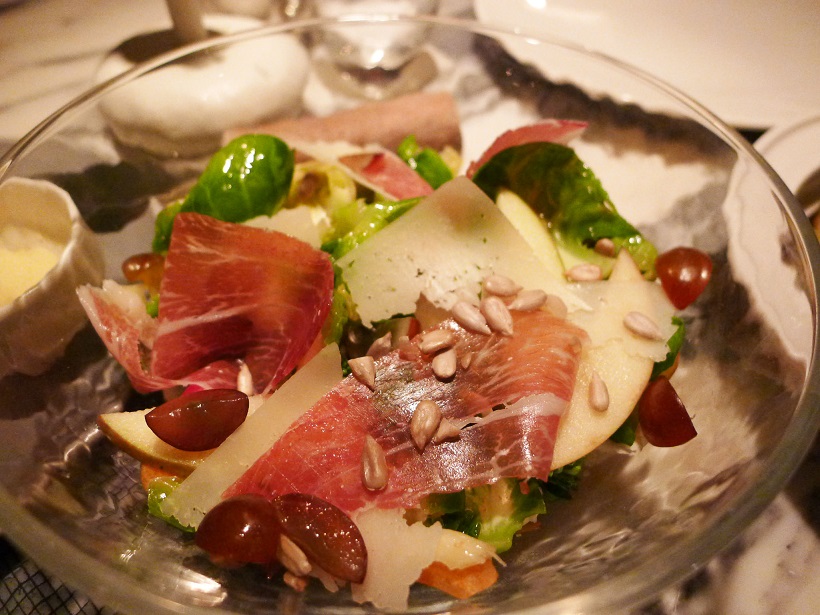 [Brussels sprouts salad]
Equally great was a braised beef short rib rubbed with pastrami spices, served with warm radishes and parsnips draped over it like forsaken lovers. The app denoted Brussels sprouts salad ($13) was less appealing, with the main focus a few disconnected leaves, and a combination of random elements that didn't amount to much, mass-wise. The salad seemed intended for those who merely poke at their salads. 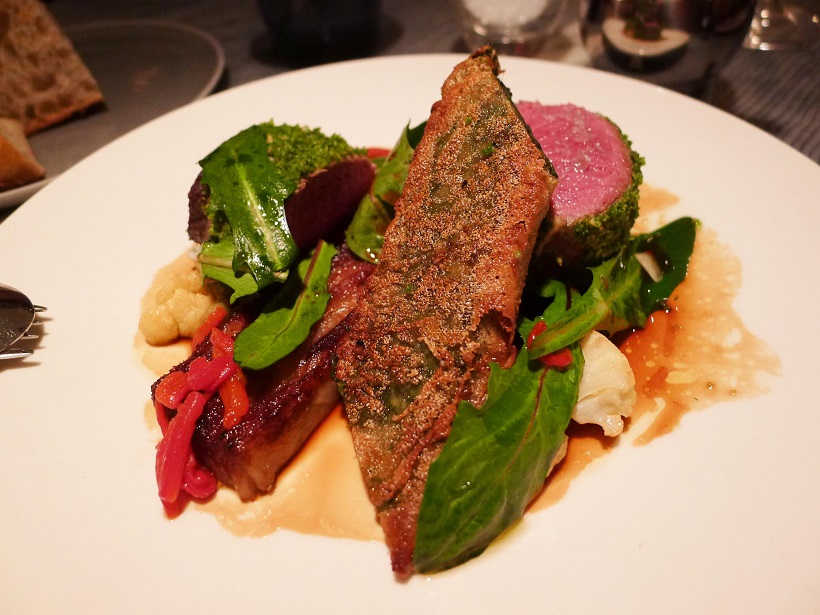 [Lamb loin]
There are fewer entrees than apps, nearly half of them involving seafood, including rotisserie branzino and steamed black bass in curry broth. Instead, we went for the sexier lamb loin ($26), which, according to the menu, comes with a spinach pie. While that element was smaller and crunchier than its robust Greek counterpart, the bounding denizen of cartoon pastures was as good as lamb ever gets, moist and pink and only slightly resistant to the knife. 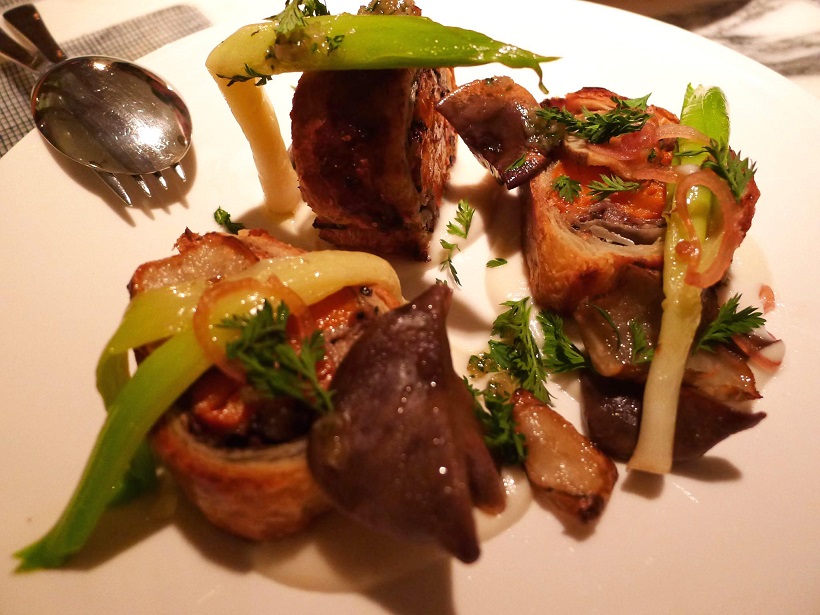 [Carrots wellington]
But the meal's absolute triumph was carrots Wellington ($20), as unpromising a name as can be imagined. What arrived took our breath away. The pastry-wrapped root vegetable, bathed in gremolata, exuded sweetness and savor, aided by the leeks, mushrooms, and herbs that surrounded the vegetarian entrée. 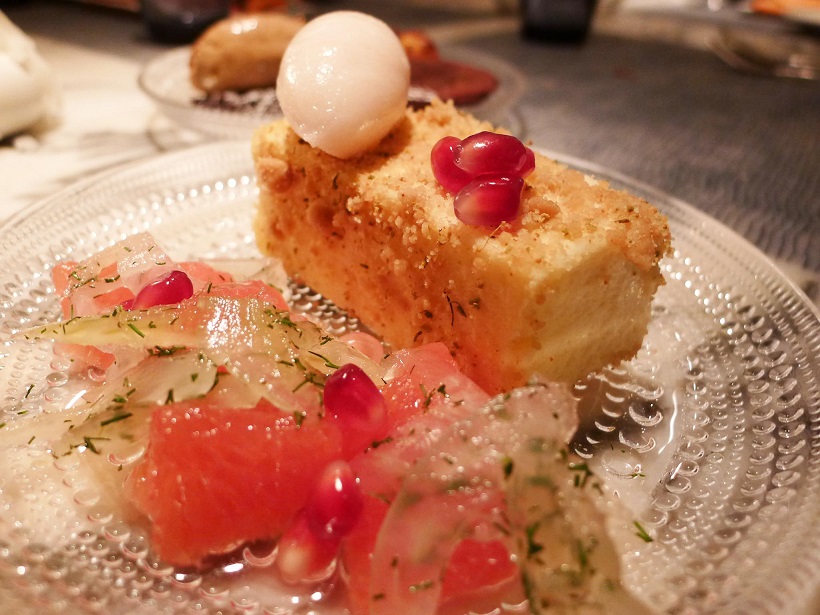 [Fennel cheesecake]
We finished off with a couple of desserts via pastry chef Deborah Racicot that were not inferior to the rest of the meal, including a boxcar of fennel cheesecake garnished with pomegranate seeds and pink grapefruit ($9), adding welcome tartness and crunch. If I could afford it, I'd eat at Narcissa regularly. In spite of the embarrassing name, that is. Funnier to call the place Self Absorption. 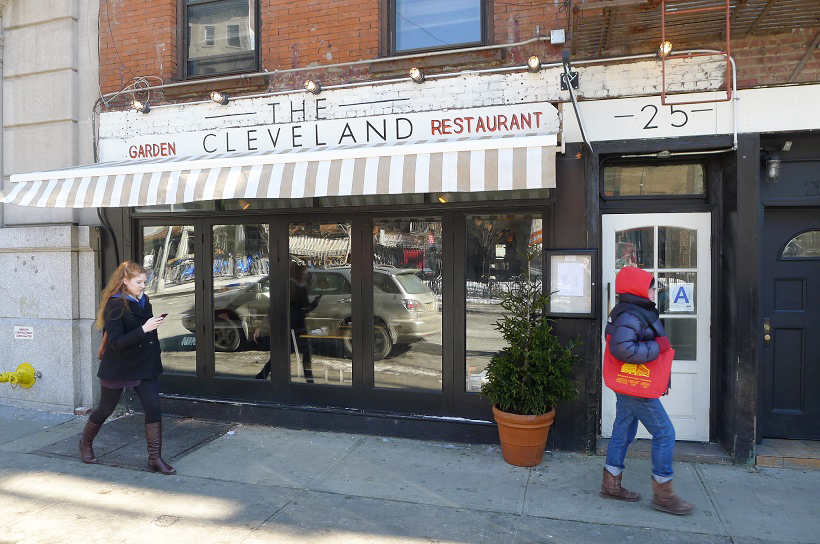 [The Cleveland]
With less fanfare The Cleveland recently installed a new chef at its storefront a mile south on Cleveland Place, a once-obscure thoroughfare that now hosts at least eight eateries. That chef is Max Sussman, late of Roberta's, the overblown Bushwick pizza parlor. The premises was for decades Le Jardin, a bistro with an agreeable backyard, and the well-worn furnishings of the present establishment suggest that earlier day without recourse to nostalgia. This is a superb people-watching spot, and as I sat there one afternoon I spotted Steve Shirripa of The Sopranos and Adam Horovitz of the Beastie Boys stroll by. 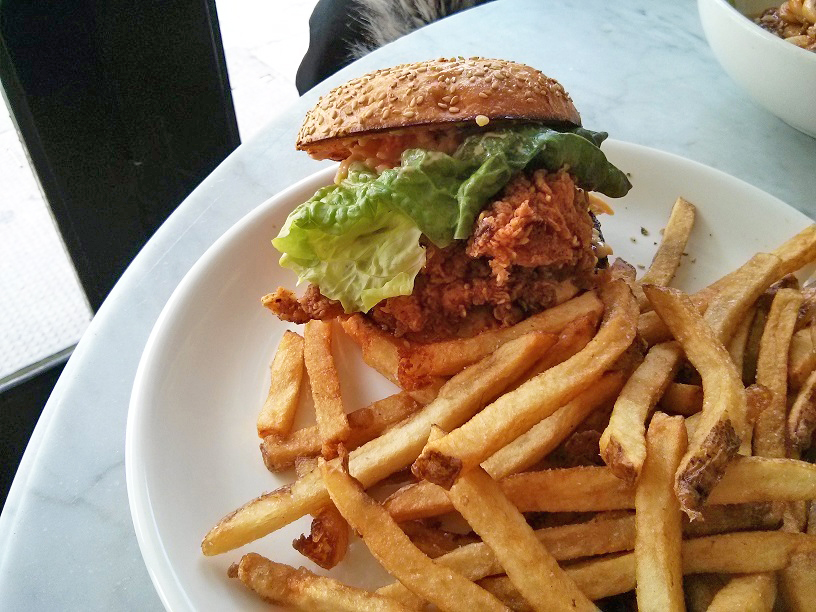 [The fried chicken sandwich]
That was not my first afternoon there, either. It turns out to be one of the best and chillest lunch spots in Lower Manhattan. The service is relaxed and assured, the menu almost inexpensive. The dish that knocked me out (not available at dinner) was a fried chicken sandwich ($12) gobbed with pimento cheese: crisp, gooey, and delicious. 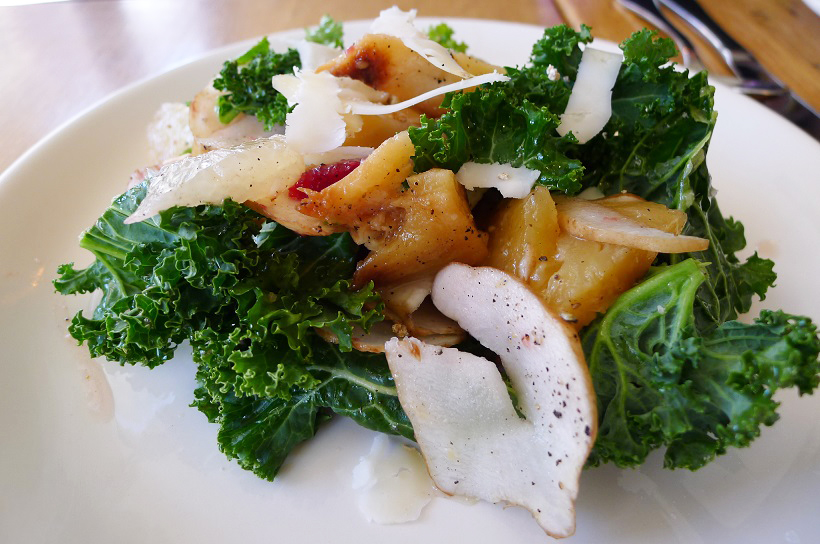 [Kale salad]
Similarly served with lots of fries, the hamburger's good, too, and so's a winter salad of kale, grapefruit, roots, and yogurt — if you think you're totally burned out on kale, this will revive you interest without rubbing your face in it. 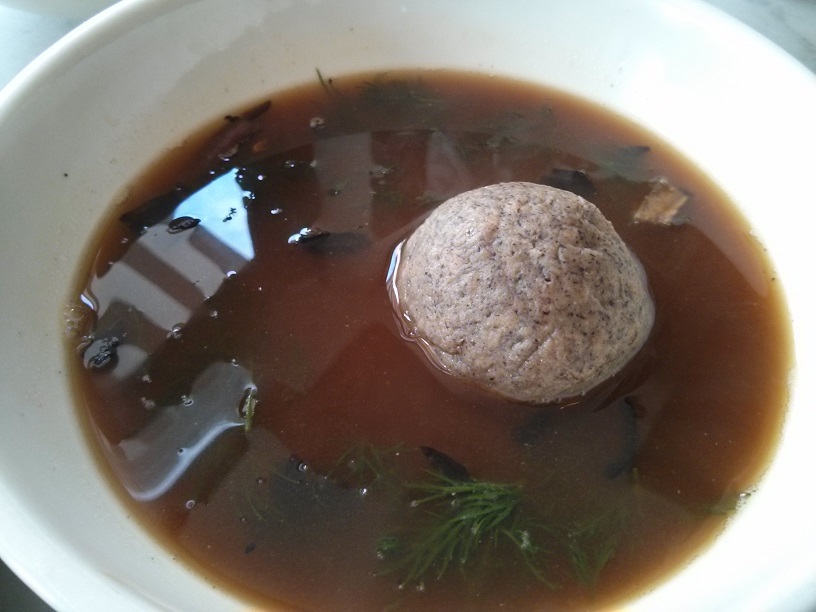 [Matzo ball soup]
Less successful was a duck soup with a buckwheat matzo ball thrown in like a dirty baseball someone just hit through the window. When the stomach yearns for a soothing soup, this is not it. 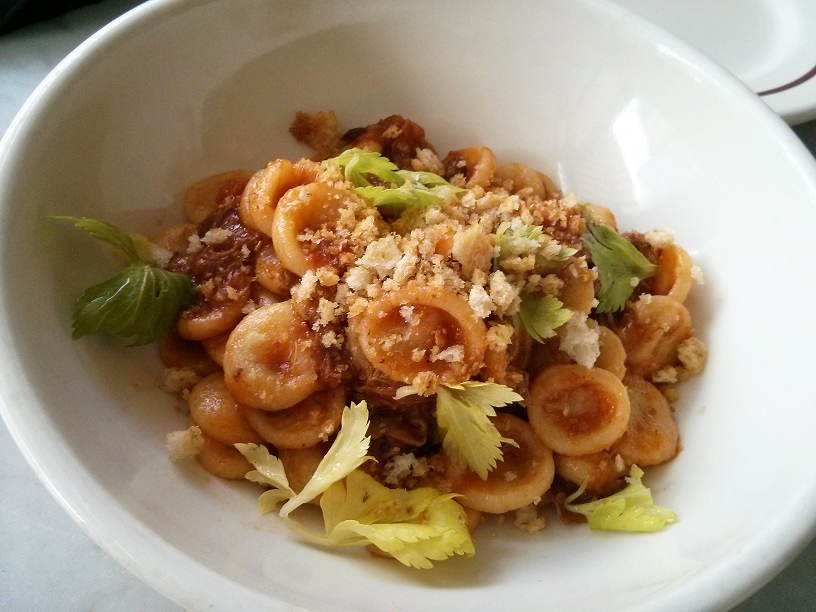 [Orecchiette]
Available at lunch or dinner, the orecchiette (a pasta with particular significance to New York and its Italian immigrants) is happily paired with a doctrinaire oxtail ragu. The dish is perhaps a bit dull, but who wants to always be challenged? Also find at lunch a separate breakfast menu that runs from Moroccan shakshuka to a simple egg sandwich. And who doesn't like a late breakfast at, say, two in the afternoon? 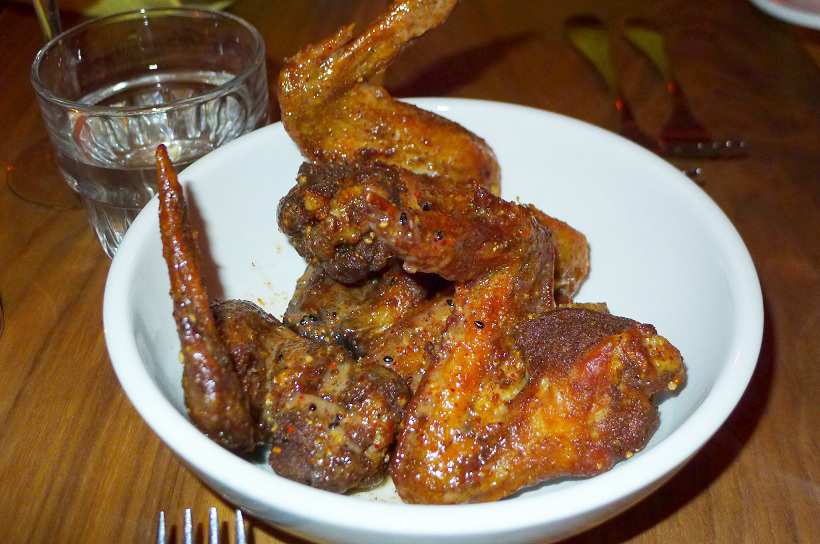 [Chicken wings]
Dinner is a bigger production, with some welcome Middle Eastern, Japanese, and Italian flourishes. The za'atar-dusted chicken wings ($12) are prodigal, herbal and crunchy; an entrée featuring Asian eggplant, white sweet potato, feta, and nori ($21) is not nearly as well-conceived as Narcissa's carrots Wellington, but still eminently edible. Sussman manages to coax mature spinach leaves into tender submission in a salad that also makes a perfectly fine entrée, accented with fermented black beans and bacon. 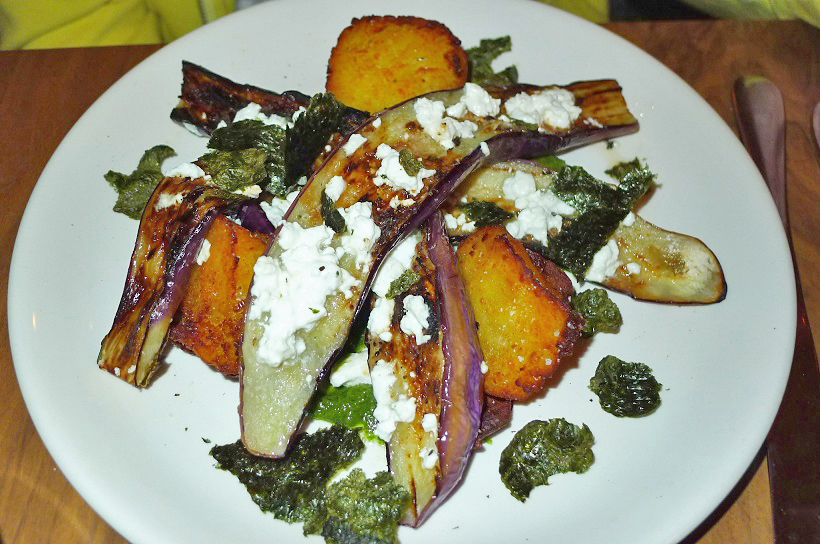 [Asian eggplant]
The wine list is slender and cheerily quirky, with individual glasses around $13. Sherry is a specialty here, and well worth drinking in the afternoon, especially if you can feign sickness and skip the rest of the workday.
· All Posts by Sietsema [~ENY~]