One legacy of the Bloomberg era is the near complete colonization of large swaths of Midtown Manhattan by fast food restaurants. Where before you had streets of little ma-and-pa places, or perhaps homegrown franchises, such as the strip of Japanese cafes on 41st Street just east of Fifth Avenue, now we have omnibus chains like Wasabi Sushi & Bento. This British franchise, belatedly riding a wave of Japanese food enthusiasm, has just touched down at Seventh Avenue and 40th Street in a large corner space with high ceilings built out with picture windows and a color scheme of white and translucent green, like an operating amphitheater. The room is lined with hot and cold cases, and there is seating enough for 25 or so at a handful of clear plastic tables, and at counters with a nice view of the avenue. 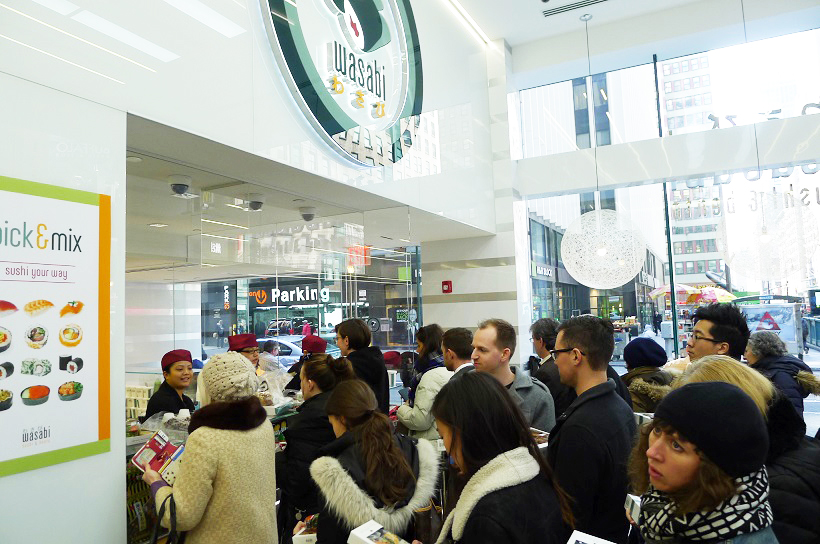 The menu roughly divides into three areas: hot prepared box lunches (teriyakis and katsu cutlets predominate); green salads, topped with a choice of pre-cooked and refrigerated appetizers; and sushi individually wrapped and paid for by the piece as you select it from self-serve cases. (There are also pre-selected assortments.) The franchise was founded in 2003 by Korean immigrant Dong Hyun Kim in London's Embankment as a substitute for the sandwiches Brits normally eat at lunch, or so the website tells us, and there are now 39 branches in the U.K. Our storefront is the first in America, but the founder has ambitious plans. 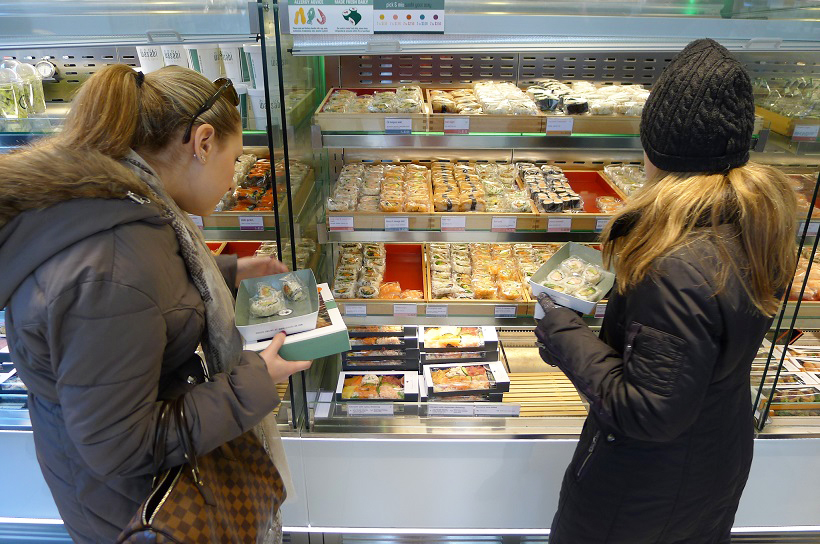 Japanese food filtered through Korean, British, and American sensibilities turns out to be a hodgepodge arriving on a tidal wave of packaging material. I suppose the refuse will be floating in the ocean somewhere in the not-too-distant future. But ecological considerations aside, wrapping each piece of sushi in thick transparent plastic isn't a very good idea. While the nigiri sushi almost stands up to this treatment, anything featuring nori does not, and familiar maki sushi like California and cucumber rolls turn out to be swaddled in sodden seaweed. Moreover, laver is also used as a vehicle for several invented rolls, one of which deposits a sweetened version of the standard Japanese seaweed salad plus extraneous edamame into a gummy circle of nori with rice on the bottom. Eating it is like sucking something from a sink trap. 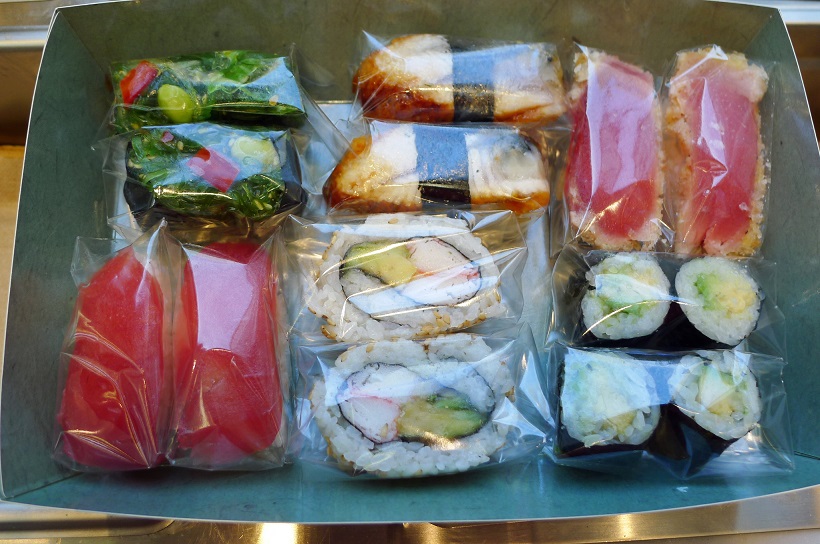 Moreover, a meal of, say, 12 individually wrapped pieces of sushi represents quite a bit of unwrapping work. You can either do it all at once, making you a scullion in the service of your own meal, or one at a time, allowing your hunger to mount between bites and your enthusiasm to wane as the meal wears on. Will you be able to summon the desire to unwrap that last piece of sushi? 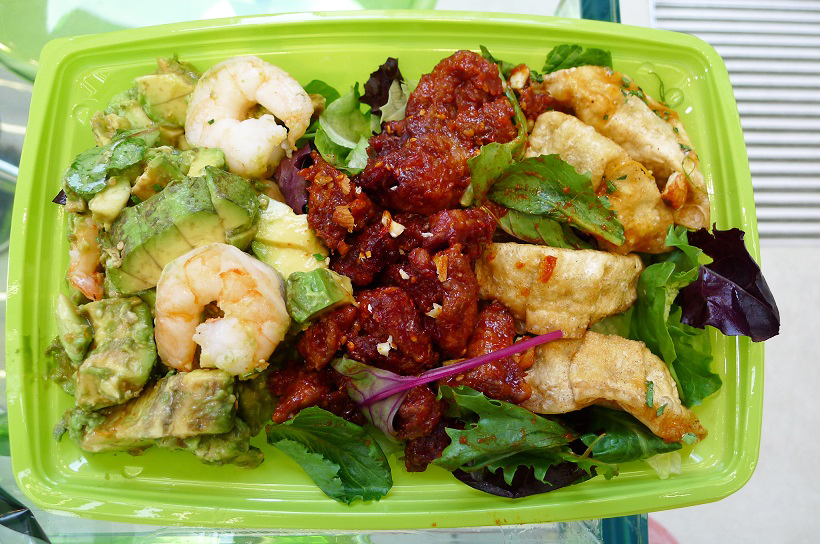 Salads, available in several sizes, are something of a misnomer. They begin with a bed of dried-out baby lettuces that taste of the supermarket. Then you are asked to pick three substances from the glass-fronted refrigerator in front of you, at least with the $8.95 version. As the countergal piles on these extras, you're likely to feel grateful, because she does so with a free hand. But get back to your desk at work and discover the deep-fried chicken morsels are stone-cold and hard as rocks, the gyoza taste like cardboard, and the shrimp salad is made with large but mealy crustaceans heaped with avocado that has turned brown underneath its brown dressing. Four dressings are available, but a friend I shared a $35.82 meal with exclaimed upon examining the contents of the thick plastic tray, "This isn't really a salad in the normal sense of the word, is it?" 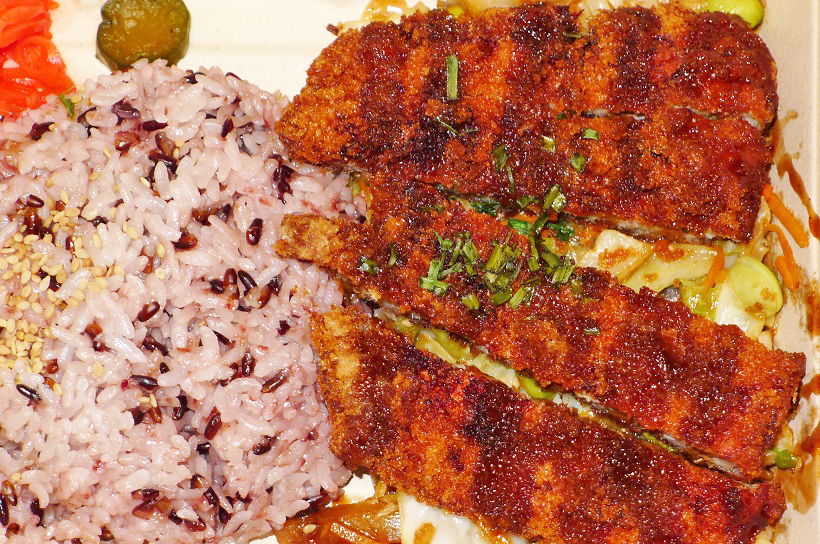 Which brings us to the prepared bento boxes. As opposed to the cold stuff on the menu, these come in cardboard and they're delivered warm. Mine was an adamantine pork cutlet thickly breaded, cut into four, and drizzled with tonkatsu sauce, with a heap of red rice on the side, plus some shredded red ginger and a pickle or two ($7.95). The result was edible, but hardly cravable, and you can certainly find a Japanese restaurant within a few blocks that will do a much better job of a similar meal at a dollar or two more. But then again, these bentos are warm and ready to grab. So someday, like me, you might find yourself standing five minutes in line with a press of fellow lunchers at Wasabi Sushi & Bento, in pursuit of such a meal. Cheap? Perhaps. Good? No.