Share All sharing options for: Drew Nieporent on Chefs, Restaurateurs, and Tribeca

Welcome to Kitchen Time Machine, a new interview series in which author and Toqueland blogger Andrew Friedman sits down with some of New York's most iconic chefs and restaurateurs. The series continues today with part two of Andrew's interview with Drew Nieporent. 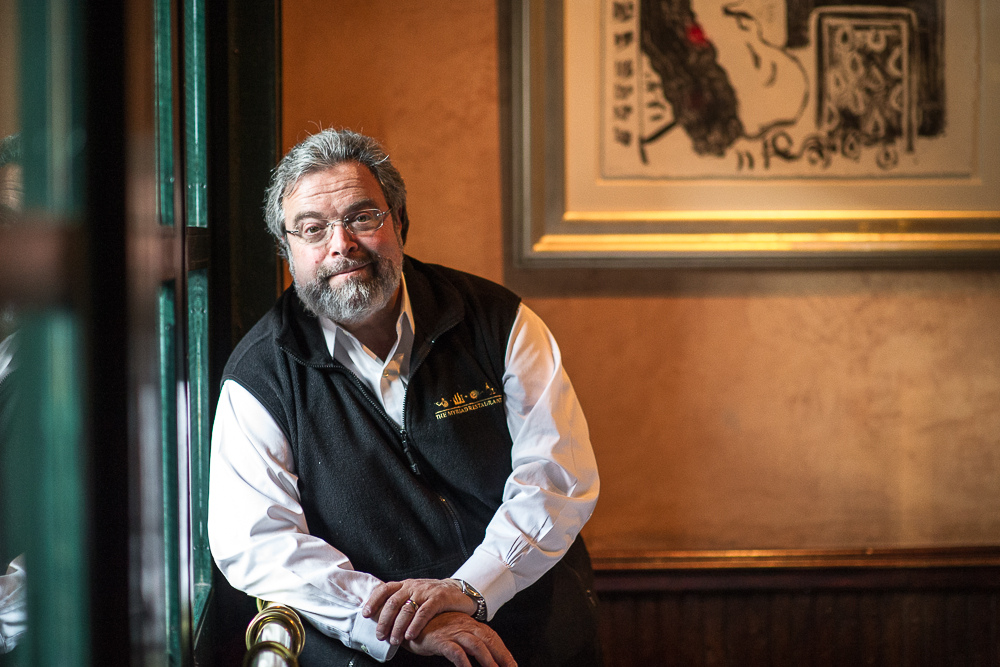 [Drew at Tribeca Grill by Daniel Krieger]
Andrew Friedman: So, the occasion for this series is the book I'm writing about the American chefs and restaurants of the '70s and '80s. One of the great themes that plays out during that time, is the spotlight moves from a land ruled by owners to a land where chefs dominate the news; maybe not the business, necessarily, although that starts to happen, but the headlines, the boldface print.

How do you feel about that transition?
I think that's proper. When a movie is released, the odds are that the billing is about the actors. So how do we market ourselves?

You mean as owners?
As business people, we're putting forth a product. We should personalize it. The chef is the star and therefore they deserve to be recognized. I was all for that. The only thing I would say, though, is that directors of movies also have a place. And the unfortunate thing is that restaurateurs to a great extent have sort of been forgotten, yet we take on tremendous burdens. Those of us who are out there for many years now and have done a lot of different things, have made tremendous contributions. And in my case I don't think I'm fly by night. You're sitting in a restaurant that's been here for 24 years. [Note: Our interview was conducted at Tribeca Grill.]

The public relates to the chefs. They feel that they're artists who cook. They're the stars.

I think there is a danger sometimes when a chef decides to call himself a restaurateur. And there's a million examples of this now. Because whether they take on the burdens of being a restaurateur or not, the public, the guest, wants to see them in the white coat. Now maybe Clint Eastwood was a better director than he was an actor, but I bet you if you poled it, the vast majority would have said let's see Clint Eastwood as the actor.
Angelina Jolie is becoming a prolific artist and is starting to direct, but I think we'd rather see her as an actress.

The public relates to the chefs. They feel that they're artists who cook. They're the stars. Even myself when I walk down the street and people recognize me, they go, "Chef!"

Is that right?
Yeah, because...restaurateur? I'm very happy that chefs are getting the accolades and the credit; I just think there is a place for the restaurateurs that still go out on a limb in this collaborative process of working with chefs.

There is a new paradigm: Will Guidara and Daniel Humm. Nick Kokonas and Grant Achatz. Pairings where maybe the chef is more well known, but they're often joined at the hip in the public eye.
Mario and Joe.

Mario and Joe would be another one. What do you think about those arrangements? Do you think that's the model for successful professional marriages in the future?
Yes. Andrew, understand something. Any time I had talented people even from the very first relationship with David Bouley, other people tried to get in between. I never made anybody sign any kind of a contract. It was always on a handshake and it was always in trust. Therefore, the answer to your question is it's the integrity of the Daniel Humms and the Bryce Shumans and the Jean Georges Vongerichtens and Mario Batalis, that they stay loyal to the arrangement. They don't test the arrangement because it's very, very, very difficult.

I never made anybody sign any kind of a contract. It was always on a handshake and it was always in trust.

In my case I've given so many people their first opportunity. And sometimes I scratch my head and I say, "I don't get this." It's like, they must see me as some exalted wealthy person because it would be great one day if they called me up and said, "You know, you gave me my first opportunity a dozen years ago. I'd love to collaborate with you on something in the future." It will never happen.

Well, Broadway Danny Rose. He's this agent. Every time somebody catches fire, they go with another rep.
I'm going to have to watch it again. I love that.

When I turned 50 I sent out an invitation and I created a family tree. And it speaks for itself. And that was a long time ago. I think we've always created an environment of freedom. We've always created an open minded environment where we never treated people with anything less than dignity. And this was not the case in the restaurant business when I was working in these restaurants. So the lessons I learned when I decided to open my own restaurant was I'm going to treat people with respect and dignity. And that's what I meant earlier. There were so many stupid people. 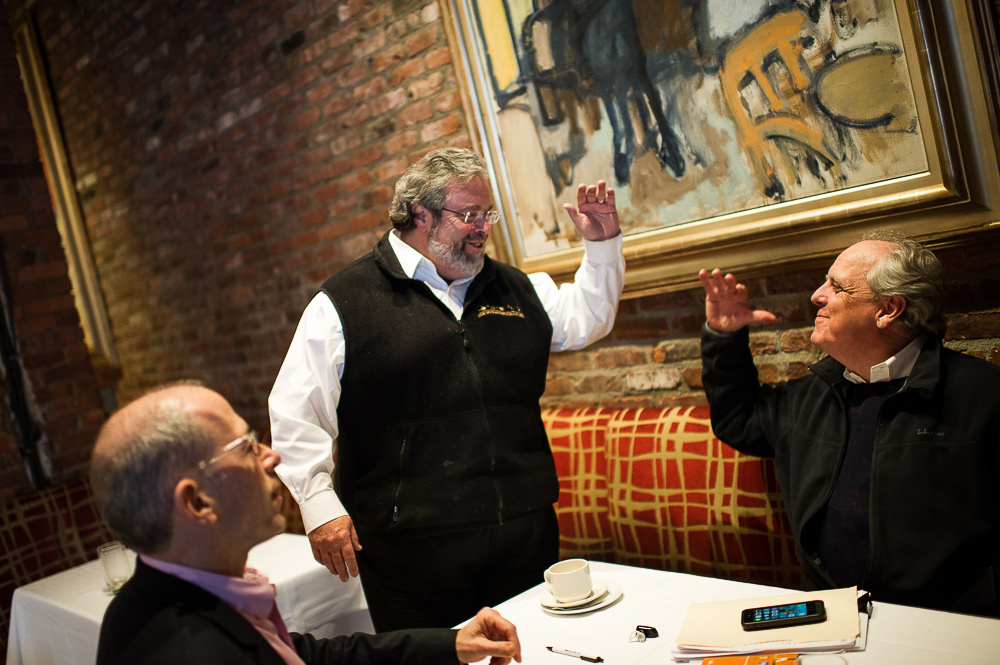 You're not just talking about how you treat your staff; you're talking about the customers as well?
I'm talking about everything. We changed the outlook. We raised the bar from a culinary standpoint, but we also abdicated this sort of dominant role of hiding the chef. And now, I'm very proud to be able to say my restaurants are chef driven, because I believe that. And when I go to a restaurant, I want to know who's cooking. I want to know who the personalities are.

Let's talk about Tribeca. I was interviewing David and Karen Waltuck recently and we were actually drawing this comparison between Brooklyn today and downtown in the late '70s, early '80s, the comparison being affordability for a young restaurateur. Can you just speak to for a minute about when you came down to Tribeca, what was it like? What did people say to you? What was the reaction you got when you told people where you were going to open your first restaurant?
There was nobody to talk to. You know, part of the great part of discovery in dining is finding a place in the middle of no place and unexpectedly it's great.

So when I would read business opportunities in the New York Times and I saw I think it was 1,500 square feet for $1,500 a month on West Broadway. I was like, "West Broadway? I'm down there. That's, like, the cool area, but it's cool in SoHo." And then below there's a little park that separates Canal Street and TriBeCa and everything.

So I found this space, 239 West Broadway, and it was very Chanterelle like. And Chanterelle was 1979 on the corner of Greene and Grand, this great corner. And I said, "This space reminds me a little of Chanterelle." It wasn't anywhere near as nice. But I said, if they can do something like what they had accomplished, that gave me the courage. And I signed the lease. I said, "I can afford $18,000 a year."I didn't have a pot to piss in, but — and then, I decided to start designing the space.

Then miraculously, there's an L shaped configuration to the building, and there was a woodworking shop on White Street and they didn't renew their lease so I took another 2,000 square feet for $2,000 a month. That's $12 a square foot if you're doing the math. Imagine that: $12 a square foot. And that was a lot of money back then. And that's when I opened Montrachet with very limited funds.

But the answer to the question is really I wanted to go in with as little risk as possible. I would have loved to live on Park Avenue, have a business on Madison Avenue. I couldn't afford the rent. So my whole experience has been, if you build it, they will come. If it's good enough, they will come.

You know, my mother was an actress who later became a casting director. When you cast a movie or a commercial or play, you have to find the right person. So in terms of Montrachet and Bouley, in terms of Nobu, in terms of Bâtard, I believe genetically somewhere I share my mother's talent as a casting person, because if you look at that family tree, if you look at the lineage, if you look at what I've said and what I've done, I've worked with talented people because it's not like, "Oh, he had a career over there, and let me see if I can steal that guy from this organization." And trust me, there's been a number of incidences, well documented of course, that I've gotten into beefs about. But I'm at the stage where I want to feel that it's organic, that we did this the right way.

Head over to Toqueland to read more of Andrew Friedman's thoughts about Drew Nieporent.