Punjab on Third and Other Great Cheap NYC Restaurants

Share All sharing options for: Punjab on Third and Other Great Cheap NYC Restaurants

Downtown Manhattan neighborhoods are dotted with Punjabi cabbie hangs. These narrow and often anonymous-looking storefronts sell nearly everything the driver needs, from boxed cookies and crackers from the home country to religious articles to headache remedies in powdered or pilled form. These places also mount a rudimentary menu of rice, curries, and samosas, often largely vegetarian. Not because most cabbies eschew flesh — but because vegetable matter is so much cheaper. 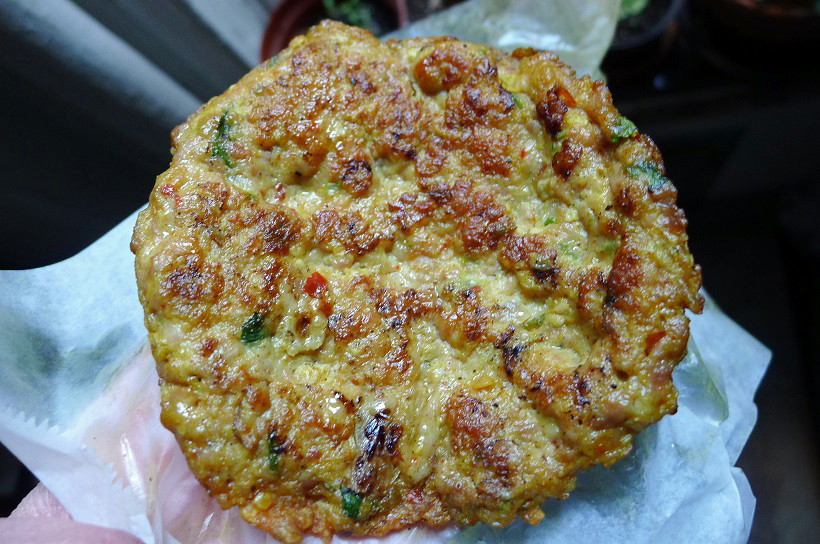 The most famous of these places is Punjabi Grocery and Deli (114 East 1st St, 212-533-3356), just off Houston Street, but I'm partial to Dil E Punjab Deli (170 Ninth Ave, 212-647-9428) in Chelsea, slinging perhaps the best vegetable samosas in town, with a menu that extends to only two or three other dishes per day. What may be the newest, and certainly the one with the largest menu, is Punjab on Third. This joint retains its identity as a full-blown bodega, while offering the largest selection of halal-certified food of any cabbie hang. Which means cheap meat and lots of it. Drivers double park and run in for a $1 chai tea and a shami kebab or two (see picture), fabricated from coarsely ground chicken formed into small frisbees dotted with herbs and chiles, and utterly delicious.

The shami kebabs are an astonishing $2 each. Throw in some rice and a serving of saag (spicy mustard greens), and you have one of the cheapest meals in the Gramercy Park area. Splurge a bit and you can have a spice-rubbed whole tilapia, and there are snack pastries galore. Unlike the other Punjabis, though, there's no place to perch. But carryout might just work for you, since nearly everything can be successfully reheated by microwave back home, or eaten on a bench in nearby Stuyvesant Park. (220 3rd Ave, 212-228-6768)

Skippy's was perhaps Staten Island's most famous food truck — a '50s era step-van that cruised the Atlantic seaboard selling hot dogs in several regional styles. Then along came Hurricane Sandy, which quite literally blew the beloved truck away. A year later, it was replaced by a new truck, but now the owner has also established a brick-and-mortar location in Mariner's Harbor right on Richmond Terrace, a thoroughfare that runs along the picturesque Kill Van Kull in the shadow of the Bayonne Bridge. 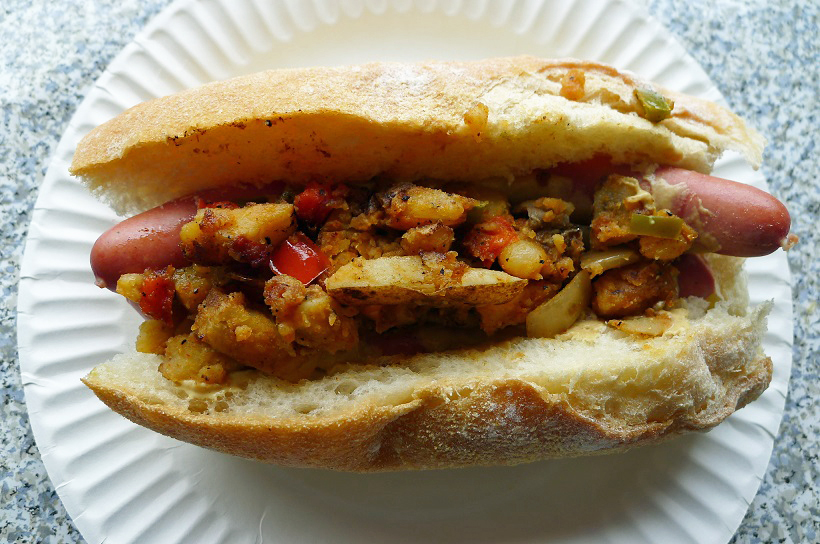 [Newark Double Dog]
True to its original mission, the storefront sells Manhattan dogs (sauerkraut and mustard), Brooklyn Dogs (red stewed onions and mustard), Coneys (chili and mustard), Texas Dogs (chili, cheese, jalapenos, and salsa), Chicago Red Hots (pickles, diced tomatoes, relish, peppers, diced onions, mustard — not exactly authentic, but who's keeping track?), and the one shown here, a Newark Double Dog, which has fried potatoes and sautéed peppers and onions. It would be called an Italian Dog in the suburbs of Newark, typical of the genre found at places like Jimmy Buff's in West Orange. There are a half-dozen other locales name-checked on the menu too, and Skippy's also sells burritos, hamburgers, knishes, and grilled cheese. And none of the double dogs, which feature a pair of natural-skin franks on superior bread, cost more than $4.99. Note: True to its working-class constituency, Skippy's is only open from 6 a.m. to 4 p.m., Monday through Saturday. (2960 Richmond Terr, Staten Island, 718-448-4920) 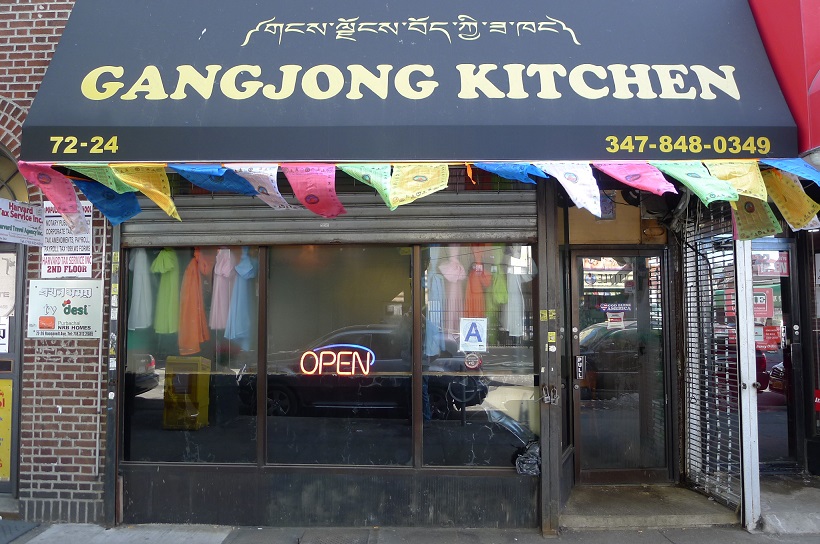 There are over a dozen Tibetan and Nepalese cafes and dumpling shops within a four-block radius of Gangjong Kitchen, so why make it your choice? Served with a tart and spicy sauce, the chicken or beef momos (giant grooved dumplings) are great, but then so are the ones at the all-night cart around the corner on Broadway. Located on the south side of Roosevelt Avenue, the place is technically in Elmhurst. The facade is festooned with pastel Buddhist religious banners, and the same crepe-paper décor prevails inside. There are only a handful of tables at this wonderfully intimate spot and all look into the kitchen, where someone's mom bustles about. You may encounter a bit of a wait if the place is even slightly crowded, especially if you stray to some of the more unusual items on the menu, but the wait is worth it, and it may leave you wishing you could wait longer. 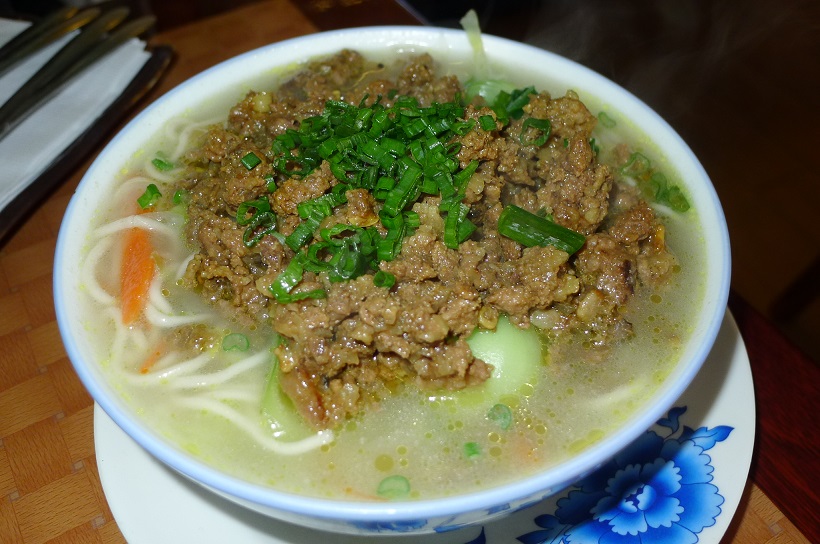 [Thukpa]
As is the practice in Tibet, the menu offers some Indian and Indo-Chinese dishes, too, but a friend and I made a lunch of standard Tibetan stuff, including a noodle soup with crumbled beef on top called thukpa, a really wonderful salad of shredded chayote, and a fiery curry of cubed chicken sided with a steamed loaf of bread. It was way more than we could finish, and the entire tab was $19. (72-24 Roosevelt Ave, Queens, 347-848-0349)