Dispatch From the Ramen Frontier: Sapporo & Ramen Ya

Share All sharing options for: Dispatch From the Ramen Frontier: Sapporo & Ramen Ya

In the 1970s and 80s, in the run-up to what became known as the Japanese Economic Miracle, Midtown flooded with Japanese businessmen. Many worked in Midtown and commuted to their homes in Westchester or New Jersey, and the area between Grand Central and Times Square became filled with restaurants that catered to them, many specializing in a single type of dish. We had one place that turned squirming elvers in a tank into eel dinners by cooking them the conventional three times; another featured the pancake okonomiyaki with a choice of fillings griddle-fried right at your table. Three restaurants specialized in fugu, though only one of them served the wild (rather than farm-raised) version of blowfish that, if not properly prepared, could kill you with its toxin. Sadly, most Japanese restaurants from that era are now gone.

Founded in 1975, Sapporo, just east of Times Square on 49th Street, constituted a kind of diner for Japanese ex-pats, specializing in homely luncheon fare that included gyoza, fried chicken, katsudon, curry, udon, and, most particularly, ramen. In fact, it was one of the few places in New York City that offered the Chinese-inspired wheat noodles at a time when they had not yet been fetishized to the extent they are now. As I recall, early offerings included only plain shio (salt), shoyu (soy), and miso broths, with the cold and brothless noodles called hiyashi chuka available only in summer.

But over the last few years, Sapporo's ramen offerings came to seem pallid and old-hat, considering that many of our most fashion-forward noodle parlors had started serving diverse and nuanced broths, multiple shapes and thicknesses of ramen, with oddball ingredients like chile paste, butter, coconut milk, and grated parmesan added to their steaming bowls. Not to be left out, Sapporo started revamping its ramen program not long ago, and I recently visited twice to sample some of the newer offerings. 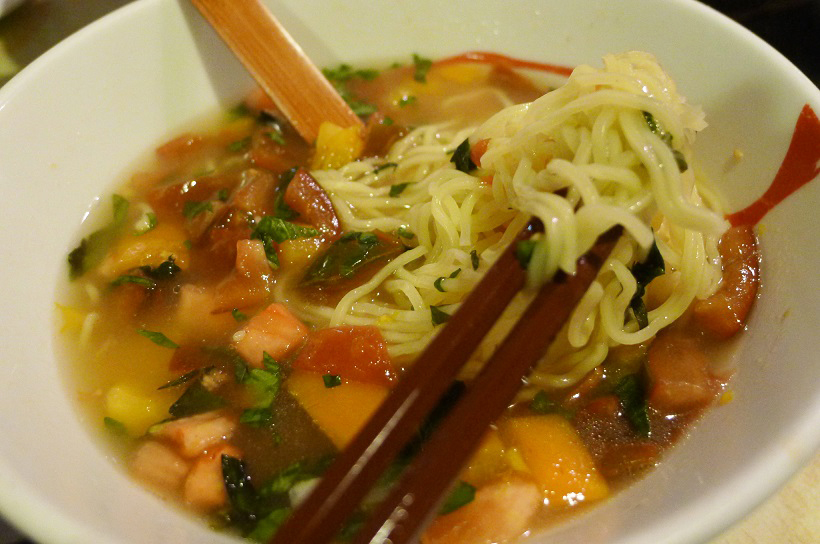 The place, which is mobbed around midday with a combination of Times Square tourists, foodies, students, and, yes, Japanese businessmen, now offers 10 types of ramen plus a special or two every day. One of the weirdest is tomato ramen ($9.50), described as "ramen with an Italian twist." While I feared the shio broth it's based on would be thickened with fresh tomato puree or even canned tomato sauce, what arrived was a thin soup bobbing with cubed purple and yellow tomatoes, which — perhaps luckily — imparted almost no flavor, but delightful colors. The chopped basil didn't add much either. 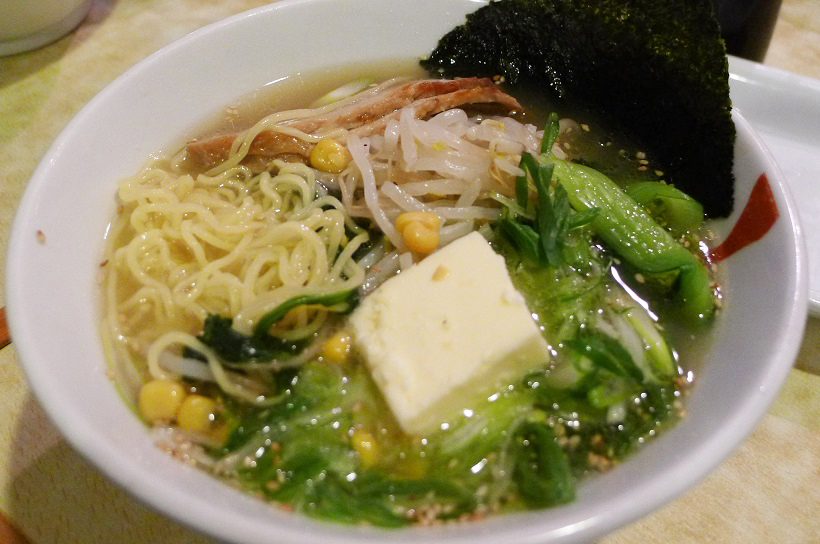 [Shio butter-corn ramen]
Another unusual choice is shio butter-corn ramen ($10), like something that might have been thought up by a dairy farmer from Iowa. Lest you worry the bowl skimps on the butter, there's a ginormous pat of it, and the flavor it gives the plain saline broth is really a little overwhelming: you're better off removing half. Corn has been a component of ramen for quite a long time, and it adds virtually nothing apart from a few glints of color. Call this ramen "yellow on yellow"; I wouldn't go back for it a second time. 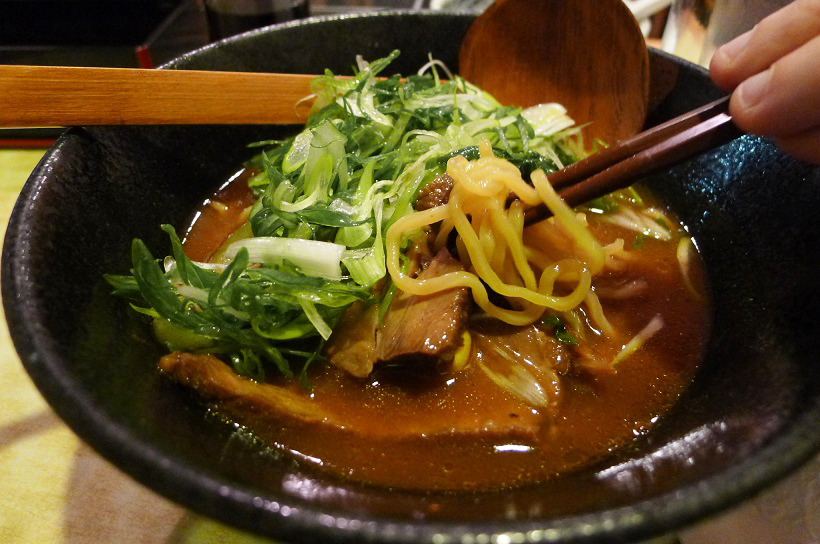 [Curry ramen]
Things started looking up, though, with curry ramen. This fusion of Japan's wacky curry tradition — which often incorporates fruit notes into the curry-paste — and the ramen phenomenon is found at few places in town, among them Rai Rai Ken and the Naruto Ramen chain. I might think it was a bad idea, with the thick brownish broth overwhelming the delicate noodles, only at Sapporo this dish is delectable. Part of the reason is a thicker-gauge noodle, which stands up to the thick soup. Plenty of chopped scallions provide green flavor highlights, and, apart from a couple of slices of pork, there's nothing else in the bowl. Quite yummy!

Ramen noodles have provided a vector for the introduction of hot chiles into the Japanese menu. It began a few years ago with a few noodle parlors, including Ramen Setagaya, using extremely spicy miso paste. The phenomenon was extended with the deployment of chile oil in other broths, till a sort of competition developed among ramen parlors in town to see who could come up with the hottest bowl. Up till now, the prize went to the geki kara ramen at Tabata, behind Port Authority, which sported a quarter-inch-thick lake of chile oil on the surface, and left you gasping for air after every bite. 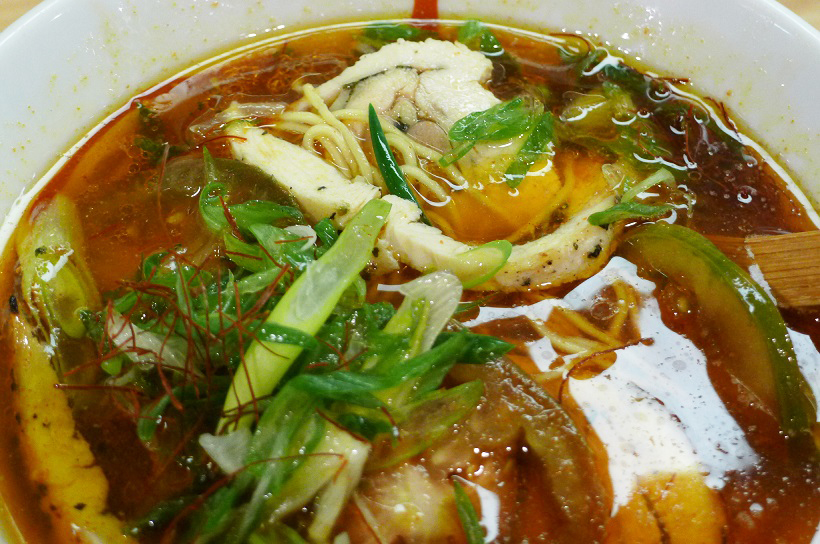 [Spicy ramen]
Now along comes Sapporo with "red hot chile ramen" ($10), which pairs chile oil with shredded red chiles and then mellows them slightly with chicken broth and sliced tomatoes. Here the tomatoes are an asset, and the sliced chicken is better than the fattier pork would be. Rather pretentiously, this special is touted on its own placard: "The acidic sourness of the tomato and the chicken fat harmonizes with the spicy broth to create extra levels of tastes [sic]." Purple prose aside, for the time being this is the most mouth-searingly hot bowl of ramen in town. 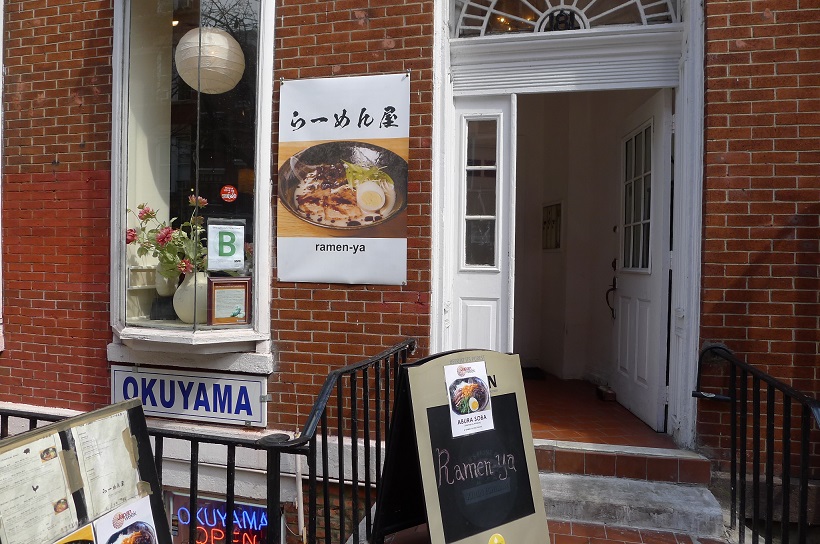 [Ramen Ya]
Recently, Ramen Ya on West Fourth Street in Greenwich Village was touted for its delicate and well-made broths by Anita Lo via Twitter. It replaced Aki, a good-but-obscure sushi restaurant, in the same tiny, walk-up premises, which are sadly somewhat airless. 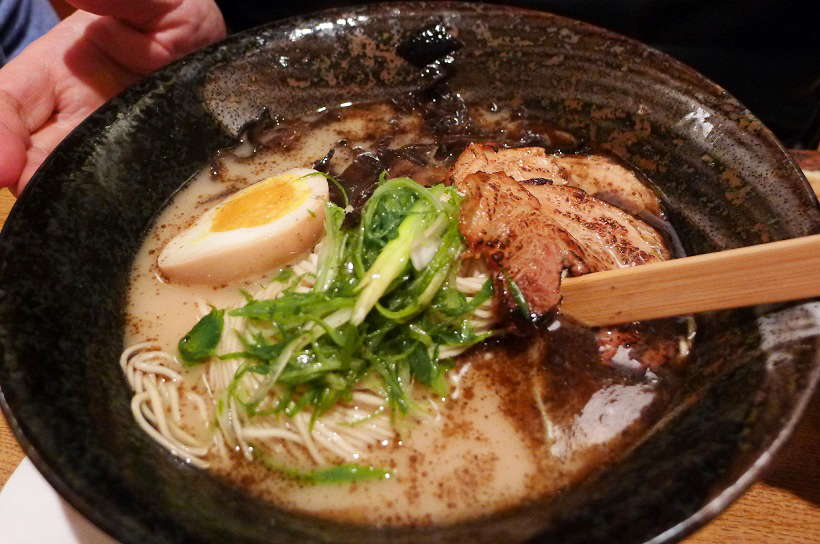 [Shio black ramen]
The signature bowl of ramen is shio black ($12): thin straight noodles in a briny tonkotsu broth zapped with black garlic oil, which dances on the surface in little droplets. There are two other pork options using the same emulsified pork broth with soy or miso added, and three parallel chicken choices, plus soupless abura soba — wavy Japanese oil noodles tossed with bean sprouts, corn, scallions, and dressing, in addition to your choice of chicken or pork.

In line with the current popularity of spicy ramen, Ramen Ya offers, for a dollar more, all of their noodles with a spicy option that largely involves dumping chile oil into each recipe. For those who don't eat pork, the spicy chicken miso ramen is a particular delight, with thick wavy noodles that go well with the density of the bean-paste broth. Anita was right: the broths at Ramen Ya do exhibit a delicacy sadly lacking at many other places. Go there before it closes.