Slice King Phil Hartman on the Legacy of Two Boots

Share All sharing options for: Slice King Phil Hartman on the Legacy of Two Boots

Over the last 26 years, Phil Hartman has built a mini-empire of neighborhood pizzerias serving quirky, but consistently tasty slices. The Two Boots pizzas have cornmeal crusts and Cajun/Italian topping combinations, and most of them are named after cult musicians or movie characters. The dining rooms are bigger and more comfortable than the ones at most slice joints, and all of them have original artwork and location specific specials. Eater recently sat down with Hartman at his Avenue A restaurant to talk about quality control, expansion, and how the New York pizza scene has changed over the last two and a half decades:

How do you maintain consistency at your pizzerias?
It is so much work. You'd think that after 26-and-a-half years I would have figured it out, and I have a lot of employees that have been with me for 20 or 25 years. It requires constant vigilance and a lot of pizza eating. I can't tell you how much pizza I eat. There have been times where I was concerned about the quality of the pizza. For instance, I flew to LA, walked into the store, looked at the crust, because it's all about the crust, made sure the crust was great, got back in a cab, went back to the airport, and flew back to New York. I was so worried about what was going on there, and everything we've done is built on one thing — our pizza crust. Without our pizza crust, our Mardi Gras Ball, our community activities, and all 16 branches wouldn't exist. It's all about our dough and our pizza crust. There might be other kinds of pizza that are about whatever — the sauce, the toppings — but for us, it's about the crust and it's gotta be right. It's half science, half art. It depends on the humidity, and the time of year. It depends on the water. There are so many variables. We try to make it consistent, and we're glad to hear that you think it's consistent. It's really challenging.

A lot has changed in the pizza scene in New York since you opened. Two Boots doesn't always get included in the pizza conversation, especially on the blogs. How do you feel about that?
Well first of all, we're not traditionalists. We're not following the 10 rules issued by whoever in Naples, and we're not importing our ovens from wherever. In that respect, we're old school, and we're also doing something different because we're selling it by the slice. Sometimes I feel a little bad that we're compared to places that are serving pizzas fresh out of the oven, which is a completely different experience than going to a slice place and picking out your slice and having it reheated for you. I feel like for what we're doing, nobody does it better than us. Conversely, if all we were doing was serving pizzas straight out of the oven, we would be in the same conversations. I feel like our pizzas are as good as anyone's.

The other thing is our places are lots of fun and they're filled with pop culture references and I think like people just can't get their head around the fact that you can have serious food and also have fun with it at the same time. I kind of feel like that's their problem and if they can't get over that, fine. We're serving a lot of people a year — three million — and I feel like the places have stayed really fresh and community-oriented. We don't feel like a faceless, I hate to use the word "chain," but we're not. I'm still the owner, my kids work with me, and we just try to keep it real.

Your restaurants have a very specific aesthetic. There's always a place to sit, and they're comfortable and clean. Is it a challenge to offer those amenities in a slice joint?
We want them to be places where the community can hang out. This place could be half the size, but then all of these school kids wouldn't be here having a good time. Also, each store is different. There is a video store in this one, another one has a pinball machine, there is live music in a couple, and some have full bars. So every branch of Two Boots is different. Every branch serves a home pie that no other branch has. This one is named after Luis Guzmán, an East Village pal of ours. It uses pickled peppers from down on Essex Street and chorizo. We try to come up with something that reflects the neighborhood. These places should all feel like siblings, but not like cookie cutters. 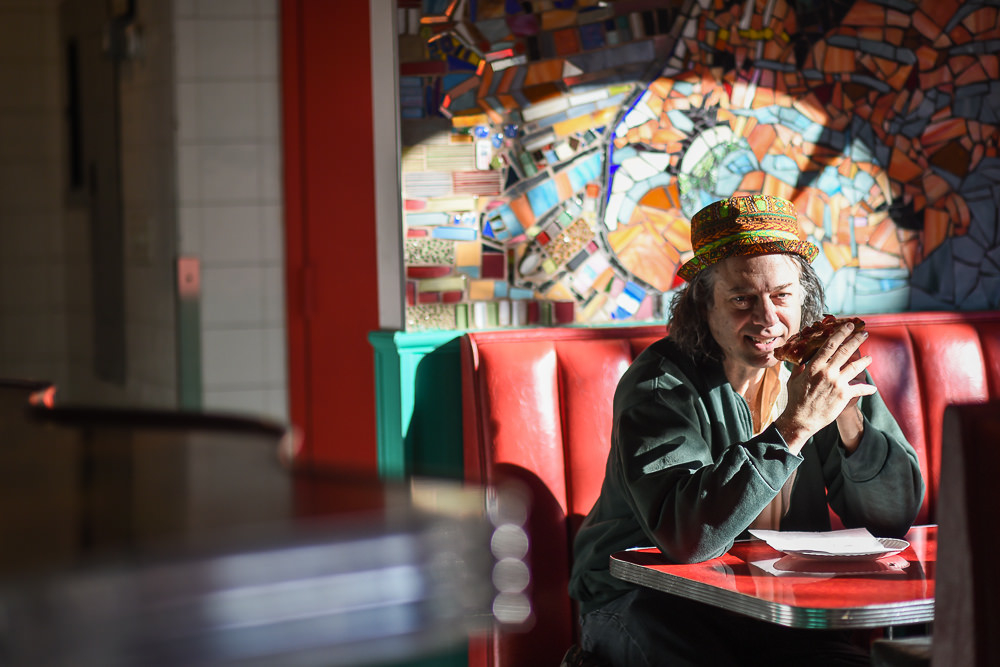 What's the biggest thing that's changed in terms of running a pizzeria in New York, since you started?
Well the real estate is daunting, I'd say is the word. Between rent and real estate taxes, it's really brutal. So we've done a lot of expanding outside of New York because the margins are better. The volume might not be quite as high, but the margins are much better. As far as the business goes, in New York there is pressure from both ends. There are the 99 cent guys who serve whatever; who knows what it is. If I was 23 and just moved to New York, I'm sure I'd be getting 99 cent slices, at least once in a while. So you've got those guys on one side and then you've got the high-end places on the other side that have created this fetishistic culture about pizza and we're in kind of a unique place in the middle. We try to be accessible to all the school kids, but we're also trying to do something great, like this grandma slice. It's got organic San Marzano tomatoes on it, it's got the best mozzarella that you can get from our company, great parmesan, and fresh basil. It's an amazing slice.

Are there other markets you would like to expand to that just haven't happened yet?
Well, if I was just doing it by where I'd like Two Boots to be, we'd be going to cities like Newark, Detroit, and Memphis. I really love cities with a lot of grit and it's not always the best business decision. So I've learned the hard way that you've got to balance it a bit and make smart business decisions and also seek out cool areas.

You've opened a lot of restaurants, closed a few, and opened some more. Is this the most restaurants you've had?
This is most we've had. We have 16 at the moment. We have a partner down in Nashville that is doing great. We've moved a couple places. We moved from Rock Center, which was way too corporate for us, and we moved to Hell's Kitchen which is like a million times more who we are. We always like to use these baseball analogies — nobody bats a thousand. It's been really healthy for us to learn from a couple of missteps about who we really are and what our mission is and who our audience is and what our identity is. It's a learning process, even after 27 years.

What's the most popular slice of all time?
I feel like there are two slices that are iconic to Two Boots. One is the Bayou Beast that combines Louisiana and Italy on one slice. It's got Andouille sausage that we get from a little town in central Louisiana that I visit once a year to make sure they're making our sausage right. It's got Andouille, crawfish, shrimp, and jalapenos. I love that. And then this grandma slice that we added a couple of years ago. It actually doesn't have the cornmeal crust, but it's got these organic San Marzano tomatoes on it, and it's just fantastic. This has become our most popular slice of pizza. It's got a different look, and feel. It feels really down-home. It's named after my own grandma, so I really love hearing people order it.

Do you think that the grandma slice is the most popular because diners are trending towards more traditional pizza these days?
I think the fact that it looks very different from every other slice in our display case makes it kind of eye-catching. I think there is something about the simplicity of it that's appealing. I'll also say that we added a vegan slice to the menu a couple of years ago called V for Vegan and people love it. Not just vegans. It's so popular that the Mets asked us to add a vegan slice to the menu at Citi Field. I was like, "You've got to be kidding me. Baseball fans are gonna order a vegan slice?" But we're gonna try it and see how it goes.

What is your favorite slice at any of the stores?
Well, you have to understand that they're all my babies, so it's like a Sophie's Choice sort of thing. There have been a lot of pizzas over the years. Let me thinks a second. [Long pause] I don't want to offend any of my babies. Well, I'm gonna plug the Swamp Witch. It's our special Mardi Gras slice. It has alligator sausage on it, and we only serve it for a couple of days a year, so I always look forward to it.

I love our pizza as much now as I did 26 years ago. I eat it all the time, but I just love pizza, period. Wherever I go, I get a slice of pizza. I have so many places around New York that I really love, and I'm always excited to try other people's pizza and learn from them. Pizza culture, and specifically neighborhood pizza culture, is so wonderful. The act of eating a pizza and sharing a pizza with people is such a beautiful thing.