Share All sharing options for: A Full Explanation of Batali & Bastianich's SLA Issues

Yesterday the news broke that the NY State Liquor Authority had placed on its upcoming agenda certain items relating to a proposed $500,000 fine, license suspension, and ownership adjustment to Eataly Wine LLC. The public document cited lists these proposed actions as pertinent to Eataly Wine LLC and also to several restaurant liquor licenses associated with the Bastianich family in New York State, such as those for Felidia, Babbo, Becco, Esca, Otto, Casa Mono, Lupa, Del Posto, Tarry Lodge, and Eataly NY, the last of which covers the restaurants at Eataly. But what does this all mean? How should we digest this information? Is Del Posto or Babbo soon going to be without booze for six months? The short answer to the last question is most likely: no.

Lets' take the information in the documents point by point.

Firstly, the SLA seems to be addressing the Bastianich family, as they include in the notice restaurants with which Mario Batali is not involved, such as Felidia and Becco.

Secondly, it would seem that discussions between the NY SLA and the legal representatives for the Bastianich family have already been underway for some time. The documents suggest that a deal has been worked out between the two sides for a civil penalty, and avoiding permanent license revocations. The suggestion of the documents is that on March 25, the legal representatives for Bastianich will plead No Contest to the points raised in the documents, and that then the already agreed upon remedy will take effect, namely the large fine, the removal of Lidia Bastianich from ownership of the Eataly wine store, and the suspension of that wine store's liquor license for six months.

It is important to note that Eataly Wine LLC is the Eataly wine shop, and that it is not the same entity as the restaurants at Eataly, or the same entity as the other restaurants in the B & B Hospitality Group, such as Babbo and Del Posto. The penalties agreed upon concern the ownership and the license of the Eataly wine shop only. The documents do not suggest that the liquor licenses of the restaurants will be suspended if the legal representatives for Bastianich plead No Contest and take the already outlined deal. It is possible that if they do not do so, that all or some of the restaurant liquor licenses may be revoked, as the maximum penalty for the outlined offenses indicates that they can be. But this is unlikely to happen, as it would appear that an alternate deal has already been agreed upon by the two sides.

The NY SLA documents state that the offenses giving rise to these penalties are "Interlocking Interest" and "False Material Statement" with dates for the offenses corresponding to the most recent license renewal or granting for each entity. In other words, something is alleged to be wrong with how the license applications were filled out. False claims or omissions are alleged to have been made on the liquor license applications or renewals. These claims or omissions have something to do with what has been termed "Interlocking Interest."

But what is "Interlocking Interest"? For an explanation of what this term means, Eater contacted John Trinidad, a wine law attorney at Dickenson, Peatman & Fogarty. Mr. Trinidad offered:

Applicants for a liquor store license are required to disclose any interest, direct or indirect, in (A) any premises currently licensed by the NYSLA or (B) any business that manufactures alcoholic beverages or transports or sells such beverages at wholesale. The second part has been interpreted broadly. Any interest in such a business — whether located in New York, another part of the U.S. or abroad – triggers tied house concerns. In 2011, the New York State Liquor Authority issued a ruling denying an applicant's request for a retail alcohol beverage license because of that applicant's interest in a foreign winery. 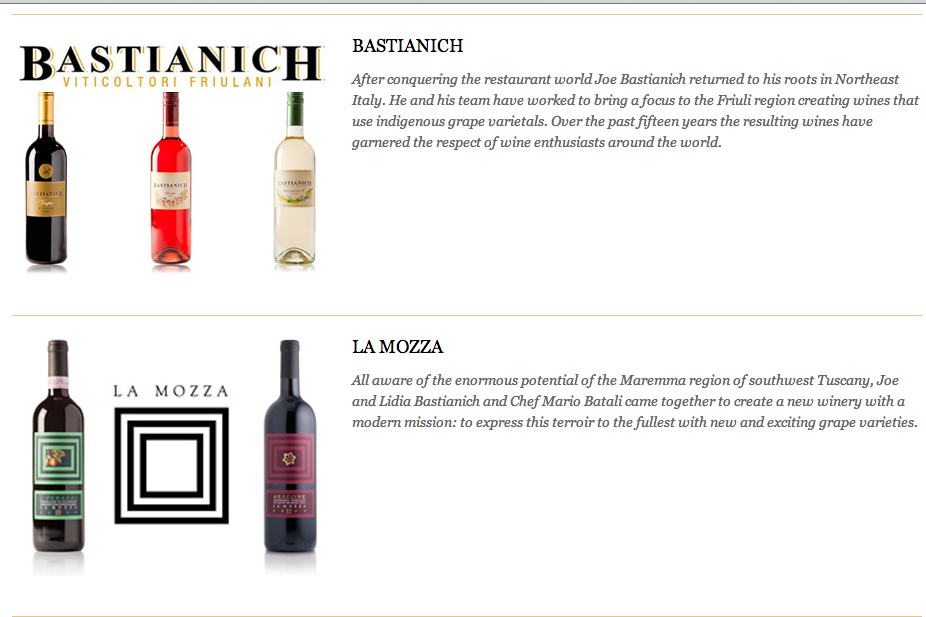 What the Bastianich family may have done in this particular instance to trigger similar concerns wouldn't be something that Mr. Trinidad would have knowledge of to comment on, as he is not working on this case for either party and has no knowledge of the ownership ties of the Bastianich family members. But in the previous case cited in this regard by the NY SLA, the ruling concerned a producer of wine who was also trying to obtain a retail license for the sale of wine in New York, and the NY SLA ruled against them in that case. It may be possible in this case that the concerns of the NY SLA are once again focused on the prohibition against being both a producer of wine (in whatever country) and a retailer of wine in New York State. If there has long been a Bastianich winery, why have these concerns been raised only recently? It may be because of the retail wine shop connection, as the retail operation, which currently displays the Bastianich wines on its homepage, opened fairly recently.

Whether or not the Eataly wine shop will close for six months in the future may be decided on March 25, but it is unlikely that the result will be a license suspension for any of the restaurants associated with Mario Batali or Joe Bastianich.