Jim Lahey Looks Back on Five Years of Co.

Share All sharing options for: Jim Lahey Looks Back on Five Years of Co.

When Jim Lahey opened Co. five years ago, it anticipated the artisanal pizza boom. A one star review in the New York Times and the steady hum of the internet hype machine made the restaurant a hot property almost immediately, with lines stretching around the block. Five later, on Eater sat down with Lahey and had a free form discussion about the state of Co. Here are the bets bits from the chat:

On the inspiration behind the restaurant:

I wanted Co. to be a 21st century pizza parlor. The idea was to create a more balanced, healthier pizza. Not so heavy on the cheese. Appropriate amounts of quality raw tomato puree which, by the way, is the standard now, everyone is using raw tomatoes. Anything canned to me is useless unless I canned it myself.

I felt at the time that the pizza genre was dead or dying, despite the fact that there were a couple of gems in the city, smaller pizza joints that did really high quality pies. For example, Anthony Mangieri at Una Pizza Napoletana. My only gripe with his product was that I felt that for such a small line and the sparse selection of items, it was too expensive — $22 for a Margarita pizza. But at the time, he was the only person doing this real traditional Neapolitan pizza. I wanted to open a place that is for foodies on a budget. Pizza Hut meets Per Se. A place you can have a glass of wine, a salad, and a pizza, and leave relatively unscathed. Our average price is around $32 a head, in the affordable range.

I tried to marry good solid technique and ingredients, not just in pizza making, but the whole menu. I wanted to eliminate as many of what I thought of as the tedious and agonizing strategies of up-selling. So, for example, I got rid of the whole formal wine presentation.

Pizza is likes hamburgers, like mac and cheese, like grilled cheese, like any of the major categories of comfort foods that are out there —  they are culturally relevant to New York City.


On the challenges of staffing:

If you hire someone to make pizza it is probable — be they from the city of Puebla, be they from the city of Cuenca, be they from New Orleans, be they from St Louis, be they from Yonkers — that they have some familiarity with this food form called pizza! So that baggage is a problem, because I have a unique way that I handle the materials. I have a unique way of making the dough, and I have a different way of building the pie. I don't take a paddle and do a swirl of sauce, because I am not making these large format pies. I look at the dough as a canvas and I am drawing a little picture on it, in a sense, The picture that I am drawing is a certain quantity of each ingredient, but in a very stylized way. If you do the same thing over and over again, in theory, you should get better at doing it. Not always, but in theory. Sometimes you find a little trick to make it easier and all of a sudden it becomes this other thing.

Labor is always a challenge as an operator of a restaurant. I am very happy with all the people, past and present, that have come through the doors, even the difficult ones. At the end of the day, I am thankful for them because I wouldn't be here sitting without them. 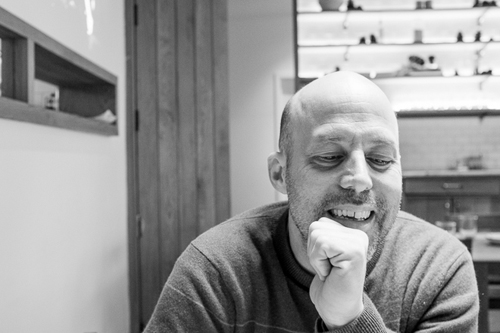 On Frank Burni and the New York Times review:

We were the first pizza restaurant to get a full review, not $25 and Under, but a full review. How cool is that?  By the coolest food reviewer the New York Times has ever had, he is/was the best. And I accepted his criticism. I didn't know he was here, there were no pictures of him in the office, I wasn't cooking for him.

Yelp was enormous [when we opened]. I love Yelp because I get the honesty of a real person's experience. I always read Yelp reviews. You have to. They are real, not fake people.

On being advised to open other locations as soon as Co. opened:

I just opened the place up, I am just trying to get my legs. You want me to sell out before I have had time to savor the sauce?  I have to shove the garbage can up my asshole right now? Can't you guys think about anything but money?  Everyone is opening up too many things. It is a weird phenomenon right now that if you don't sell out, there is something wrong with you.

On the "celbrification" of chefs:

One of the things that happens at the collapse of empire is the "celebrification" of chefs. It happened to the British, the Ottomans, the Greeks, the Romans, the Egyptians, and now America. 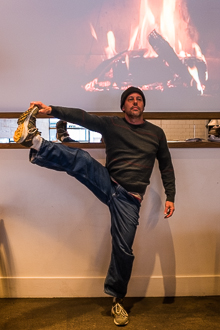 The internet makes possible for everyone to become a home cheesemaker or a web entrepreneur or a food writer.


On the James Beard Awards:

I am never going to get a James Beard Award unless I am dying, at which point they may throw me a bone and give me a lifetime achievement award.

On the Business in the last five years:

Restaurants come and go, they get famous very quickly and all of a sudden evaporate from memory. I have never seen anything like it. A lot of times it seems that in restaurants, the attitude is the commodity more that the product itself.

On who make the best pizza:

We have a very solid business. We are still a destination restaurant. During the holiday season, we get a lot of people in from out of town, when there are certain types of trade shows, sporting events, etc. But we also have a strong local following of clients, lot of regulars.