Throughout Pizza Week, the city's top food bloggers have been sharing their picks for neighborhood pizzerias. These are not necessarily the vaulted pie parlors of the city, but rather the places where you pick up a slice or a pie on your way home from work. Here, now, are pizza recommendations from Jay Pascual, Danyelle Freeman, Jasmine Moy, Erica Reitman, and the We Heart Astoria Crew: 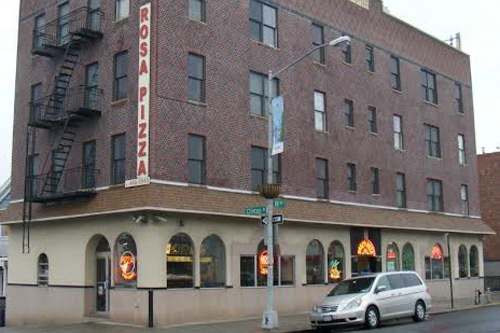 [Photo: Jay Pascual]
Jay Pascual, AKA The Food Doc: Whenever I have a hankering for New York-style pizza, I walk a few blocks to Rosa's Pizza & Pasta on 69th Street and Clinton Avenue in Maspeth, Queens. Family-owned for the past four decades, Rosa's Pizza has consistently produced pizza crusts with a crunchy exterior and a doughy interior: the perfect vehicle for the myriad of toppings available on any given day. But more than the good pizza, is the sense of community I feel whenever I enter the restaurant: the staff treats regulars like family, and new customers like long-lost friends. It feels like coming home. 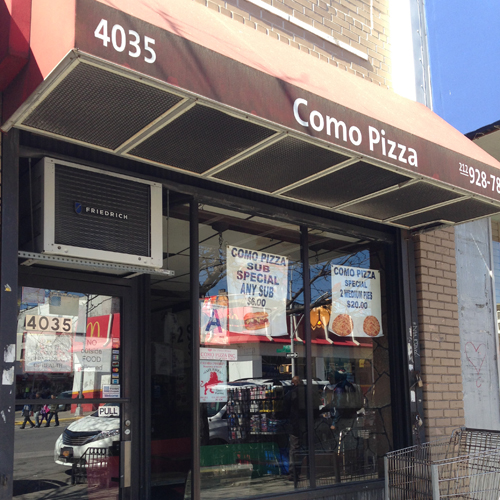 Jasmine Moy, restaurant lawyer/restaurant obsessive: I'm one of the lucky ones. My local joint is legitimately good. Just off the 168th stop on Broadway, it's busy at almost every hour. People often sit/loiter in the small fast-food-style booths between walls of faux antiqued mirror and admittedly horrendous faux-flagstone wall covering. They proudly use 100 percent Grande mozz, which any pizza-fanatic knows, is the the real deal, and even have the plaque to prove it. There's enough cheese on the slice that it strings, and the fatty cheese (this is not a slice for napkin oil-dabbers) tastes as if it may even be dry-aged; there's just a hint of tang in there. The crust, while buttery enough, sometimes just cracks instead of giving enough to fold it in half, and at $2.25 it's not the cheapest slice, but for the craving that hits late night when you're on your way home from the train, you're not going to do any better than what Como Pizza's slinging.

Danyelle Freeman, Restaurant Girl: Tragically, my neighborhood is a pizza wasteland, so I'll happily travel for my favorite slices. I love the inventive toppings and bubbly dough at Roberta's; the love, attention, and fresh basil that goes into every slice at Di Fara; and Emporio's underrated, wafer-thin Roman pies. But if I have to pick a favorite, I'll stick with Lombardi's old-school coal oven pies. Maybe I'm a sucker for the history, but after a century in business, New York's very first pizza parlor still manages to turn out deliciously smoky, thin crust pies. Their meatball pizza is the bomb.

Erica Reitman, of Fucked In Park Slope: So my fave local pizza joint is Tomato-n-Basil on 4th Ave. Despite the fact that delivery is often abysmal and takes way the hell too long, the pizza is pretty darn fantastic. They don't overdo it with the sauce, each slice is the perfect thickness (or thin-ness, rather), and the crust is a nice combo of doughy and crunchy all at the same time. Does it bother me that they use an "-n-" in their name instead of an "and"? Yes, but I overlook that shit cause the pizza is GOOD.

Judith, Meg, and Mackenzi of We Heart Astoria: If you're a pizza purist, you won't want to miss the Sophia Loren pie at Michael Angelo's, which is full of fresh ingredients such as mozz, garlic, basil and extra virgin olive oil. We love the fact that it comes in both thin and regular crust. Rizzo's plain slice is also a must, with a homemade plum tomato sauce and a blend of sharp and mild cheeses. Manhattanites, you can also get Rizzo's on the UES and LES. For Neapolitan pizza lovers, a visit to Milkflower should not be missed, especially for their non-traditional Hawaiian, with ultra thin slices of pineapple, crispy prosciutto and jalapeno slivers. Check out We Heart Astoria's Top 10 Pizzas in Astoria for more goodness.