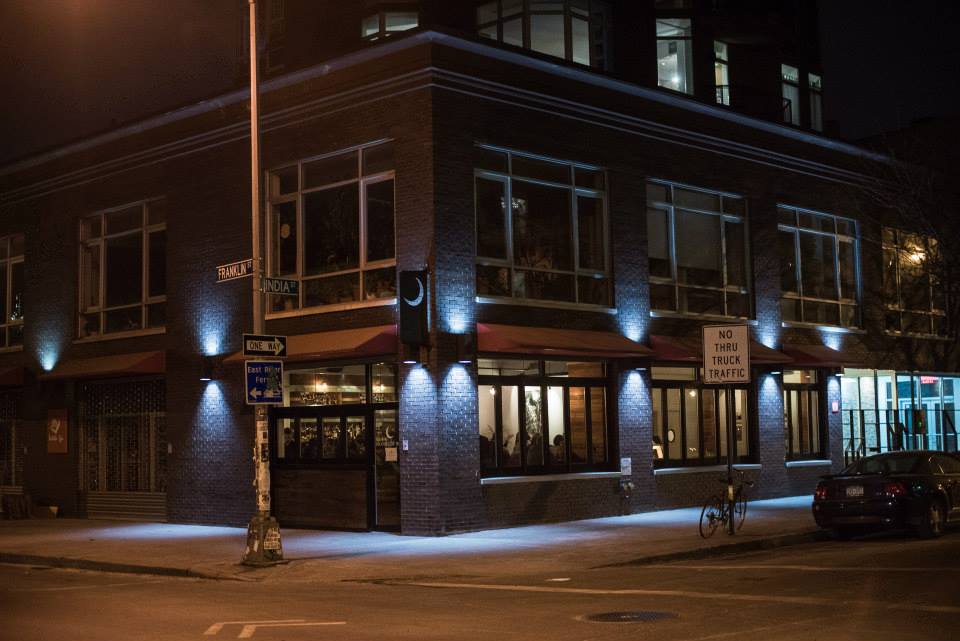 [Photo: Facebook/Moonlight Mile]
2) Greenpoint: A rock and roll-loving beer and whiskey bar named for a Rolling Stones song opened recently on Franklin Street. Moonlight Mile has 12 beers on tap and over 100 whiskeys in stock. Greenpointers reports that there's also a menu of whiskey cocktails, bar snacks like bacon bourbon caramel corn and a meat and cheese plate, and a free jukebox. Status: Certified Open. 200 Franklin St., (718) 389-3904.

3) Astoria: Mediterranean restaurant Trakia opened recently, serving organic pizzas and wood-fired dishes based mostly on Bulgarian cuisine. The pizzas run the gamut from taco pizza to chicken ravioli pizza to dessert pizza with nutella, grapes, and berries. The Bulgarian side of the menu includes lahmacun flatbread topped with ground lamb or other meats, shish kabobs, and whole roasted eggplant. Also, it has a sink that looks like this. Status: Certified Open. 38-14 30th Ave, 347-813-4709.

4) East Village: Spiegel, a Moroccan and Israeli restaurant, opened over the weekend. Bowery Boogie learns that the menu is not officially kosher, but instead "kosher style," which means no pork, and no mixing meat with dairy products. Status: Certified Open. 26 First Avenue.

5) Bushwick: The team behind Lit Lounge has opened Currant Cafe, the restaurant half of their Lit Brooklyn outpost. It serves coffee and pastries, plus sandwiches like corned beef on rye, vegan curried lentil with walnuts and cauliflower, and a sloppy joe. The nightclub portion won't open until the fall, but when it does, it will have a bar in one room and a dance floor in the other. The entire thing is located in the McKibbin Lofts. Status: Certified Open. 248 McKibbin Street.

5) Williamsburg: Krzysztof Drewiecki, the chef behind four well-liked Greenpoint Polish restaurants, including Krolewskie Jadlo and Karczma, has opened a new spot in the neighborhood. Dziupla replaces another Polish restaurant, Bedford Avenue old-timer S&B. The menu, Drewiecki tells Gothamist, will consist of the "best dishes" from his other restaurants, including duck pierogi, salmon tartare, and boar ribs. It is open for breakfast, lunch and dinner. Status: Certified Open. 194 Bedford Ave., 718-388-6194.

6) Williamsburg: The owners of Bushwick's Swallow Cafe just opened a second outpost on Driggs Avenue. Brownstoner reports that it serves coffee, tea, pastries and sandwiches, and that there's a small coffee bar with room for a few stools. Status: Certified Open. 493 Driggs Avenue.

7) Park Slope: The space that once housed the iconic old dive bar O'Connor's has just reopened as McMahon's Public House. Owners Mike and Jimmy McMahon, who bought the place a year ago, tell Here's Park Slope that they "salvaged as much as we could," but that much of the bar had deteriorated beyond repair. The space looks entirely new, and there is now a second floor with its own bar and a patio, for private events or overflow on crowded nights. A full kitchen serving Irish staples like corned beef and cabbage should be up and running soon. Status: Certified Open. 39 Fifth Avenue.

8) Upper West Side: Orale Mexican Kitchen, the replacement to Café Frida, is now open. Still under the same ownership, the restaurant (which also has an outpost in Jersey City) is attempting to appeal to a younger, cooler crowd. There's graffiti decor on the walls, and a menu of dishes like bone marrow and crispy pork belly tacos, Mexican mac and cheese, and ancho-chipotle bone-in shortrib. There's also a prix fixe option. Sunday brunch will launch next month with a $20 two-hour open bar deal. The restaurant is owned by the Beyond Restaurants Group. Status: Certified Open. 768 Amsterdam Ave., 212-749-2929.