Why Doesn't Anyone Care About Pizza Anymore?

Share All sharing options for: Why Doesn't Anyone Care About Pizza Anymore?

And now, as a Pizza Week special, here's a dispatch from Eater Co-Founder Ben Leventhal: 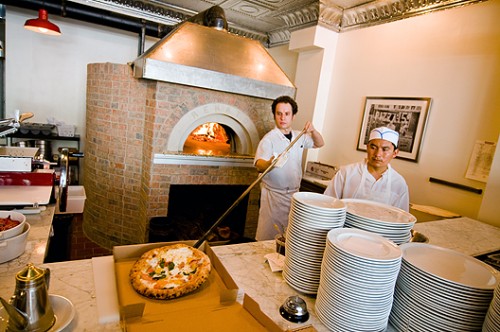 [Motorino, back in 2008 by Krieger]
It's somewhat counterintuitive to declare here in the middle of Pizza Week that pizza hype is dead. And, yet, insomuch as we don't get nearly as frothy about new chef'd-up pizzerias as we used to, there's a question worth asking. Namely: Why doesn't anyone care about pizza anymore? I had a dialog with a small handful of the aught years characters that were primarily responsible for pizza hype:

Peter Meehan, Lucky Peach editor and former New York Times pizza hyper: Good pizza was a way rarer thing. It was news. But then the know-how got around, we all saw what good pizza looked like, and it became something that we expected people to have.

BL: You're arguing, then, that we're in the golden age of pizza?

Peter Meehan: Far goldener. Motorino was a rare golden flower when it opened; now we expect him to be able to replicate that pizza at multiple locations. Was it the pizza shops that grew up or was it us?

Adam Kuban, founder of Slice, inventor of the pizza up-skirt: Pizza is eternal. And the people's love for it is as well. But the story around it is always in flux. The biggest trend in pizza of the last decade has been the rise of the wood-fired-oven pizzeria. I sort of peg 2004 as the 1993 of pizza. 2004:pizza::1993:punk — aka "1993: The Year Punk Broke," etc.

Adam Kuban: Sure, there were WFO pizzerias before 2004, but you get a couple high-profile places open in fall of that year that fit in very nicely with the rise of the local-sustainable DIY thing AND the back-to-basics, ingredients-driven ethos. That would be Franny's and Una Pizza Napoletana.

In these early days of the WFO, the narrative about ingredient and oven provenance and the speed at which Neapolitan and Neapolitan-inspired pizzas cooked was new. It is less novel these days, and, as Meehan says, it's harder for a single place to move the needle. 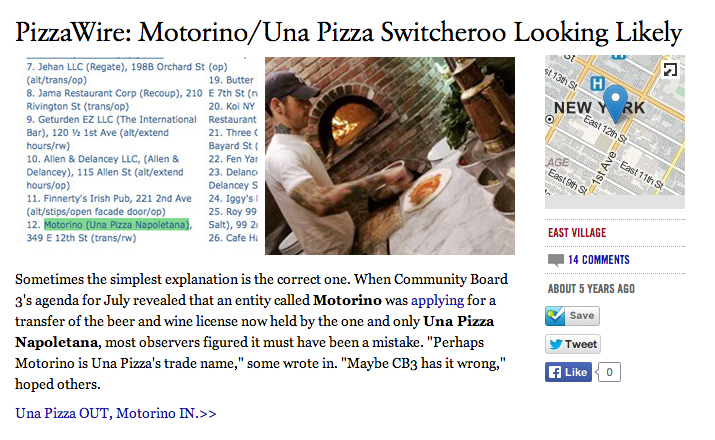 Peter Meehan: We are New Yorkers. We don't need pizza church, we need our daily bread.

Dave Arnold, director of culinary technology at FCI: We wouldn't have good pizza without the rise of good bread here in the US. Caring about bread makes us rightly understand that sauces and toppings — what most people had cared about in the '80s and '90s — were not of much use if the crust wasn't top notch. Schlock pizza chains still make their pies "old American style" piling a bunch of toppings on a crappy crust. In contradistinction, Jeffrey Steingarten once told me he didn't really care how the sauce tasted on a pizza at all if the crust wasn't good and Mark Ladner will order a topping-less rosso to test the skills of the crust-maker at a new pizza establishment.

BL: So, pizza is just better? Are there really that many Motorinos and Una Pizza Napolatanas out there?

Peter Meehan: Its not like we're stocked on pizza gods. But on the whole, I feel like the baseline is way higher. And that losing Mangieri is still a blow we haven't recovered from.

BL: I remember his oven alone often made women blush.

Adam Kuban: My guess is that the network for getting these ovens over from Italy wasn't set up until mid-2-thousand-zeros. Now, there are importers and a distribution network, but I think in the early days of the 2000s, you had to do some legwork to get them or to have them built on premises. It's a centuries old technology. 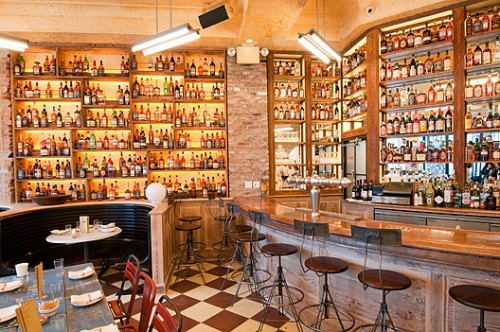 Adam Platt, New York Restaurant Critic: That said, over the last couple of years, I can't remember anything new opening up in the pizza realm that's been as ambitious as Co., say, or even Pulino's, provided you'd call even that a pizza joint. Also, more than burgers, bagels, or anything else, the city is lousy with iconic pizza joints. The market may finally be saturated.

BL: There's an interesting analog here to burgers, too, I think. I don't see anyone getting that worked up about new burgers these days, either. Like, if Umami opened in New York in 2007, I think it would have caused a full blown riot. Today, not so much.

Frank Bruni, former New York Times Restaurant Critic: Pizza frothiness followed burger frothiness and has now given way to ramen frothiness, with taco frothiness slowly gathering steam. Frothiness is like marriage. You can do it with multiple partners, but only one at a time.