Welcome to a special Pizza Week edition of Lifers, a feature in which Eater interviews the men and women of the restaurant industry who have spent most (if not all) of their professional lives working at the same place, no small feat in the ever-changing world of New York restaurants: 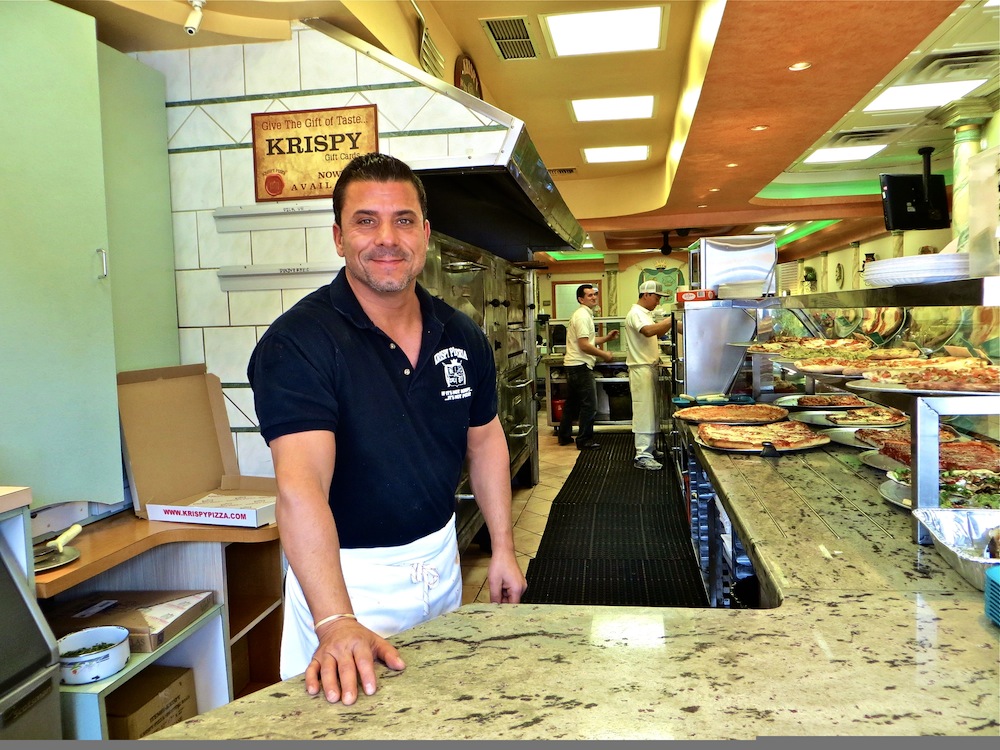 [All photos by Marguerite Preston]
Freddy Pallazzola is a lifer in the true sense of the word. His father, Peter Pallazzola, opened Krispy Pizzeria in Dyker Heights about a year before he was born, and he has been working there since he was a kid. Now Krispy has outposts in New Jersey and Staten Island (with more on the way), run in part by two of his brothers, but he and his older brother Al have stuck to the Brooklyn original, where now their own teenage sons work the after school shift.

Krispy Pizzeria is a true neighborhood joint, where one customer might trade a few words of Italian with the guys across the counter, and the next might tell the teenager who takes her order how good he looks these days. On a given afternoon, the booths are mostly filled with families, sharing softball-sized arancini and eating crisp grandma slices or the well-loved vodka pie. Here, now, is Freddy, on making pizza in a blackout, the one rule about working with his brothers, and which pizza doesn't fly in Brooklyn.

So, your parents owned this place before you did?
Yes, my dad originally opened the store in 1967. It's always been in the family. Now me and my brothers own it, and then we kinda expanded over the years. We have more locations: one in Staten Island, two in New Jersey, and we're still opening. In Jersey City, also in Sayerville.

Did you work here growing up?
Oh yes. Me and my other three brothers, we all worked in the business while we were going to school. We'd come on the weekends or after school. And my kids work here as well a few days a week, so do my brother's kids. It's something that's always been passed down from generation to generation. To be honest, this was my only job. I never worked for anyone else. I guess in my father's eyes, if I had to work, what else but in the family business? Why work for someone else?

When did you actually start making pizzas?
I've been making pizzas since the age of 15. And I'm 44 now, so it's been a long time. I would say I was working here steady at the age of 18, after high school.

And when did you become the owner?
I became the owner when my dad retired. I took over, along with my older brother, I'd say about 2001, 2002. We're all kind of split up. My oldest brother is at one of the locations in Jersey, my younger brother is at another location. I have partners at my Staten Island store. So we've kind of spread ourselves out.

How is it working with your brothers?
We work fine. We get along. There's always a confrontation here and there, but that's to be expected with family. Five minutes later, everything's fine. We got one rule: we don't make the wives get involved. That's what keeps us brothers together. I've seen it happen a lot with friends of mine, where wives will get involved and brothers don't talk to each other for five, 10 years. That's ridiculous. So that's something we always said from the beginning: when it comes to business, they don't get involved. That stuff stays between us four. They can get involved in anything else, but not the business.

Did you ever think about a career other than running this business?
Not really. I really had no desire to do anything else. It was always in my blood. I grew up doing it, and it was something I had a passion about. My two older brothers went to college, but there came a point when I said to my dad, "I don't want to go to college. This is something I like doing. I wanna stick to the pizza business." I always loved working here. I like to meet new people, I like cooking, I like being that innovator who's coming up with new types of pizzas and getting reactions.

What are some of the best new types of pizza you've come up with?
Well, there's been a lot. I mean, when my dad started out it was just round, Sicilian, and maybe calzones. And now we make like 20 different types of pizzas, so that's all stuff that me and my brothers came up with.

So what are ones you can never take off the menu?
I mean, the grandma with fresh mozzarella is a big one, also the vodka pie. The latest one we're making is the Palermo, which is the Sicilian, the thick one. It's more of a sweet sauce, and we put the mozzarella underneath. Instead of your basic sauce and then mozzarella on top, it's reversed. An upside down pizza.

Is there anything that really didn't work?
Listen, we still have some people asking for certain requests, but I don't see it moving much. For instance, the Hawaiian pizza, with the pineapple. Some people love it. Once in a while we have a request for it, but I don't make it. I feel like certain pizzas work in certain states. New York, especially Brooklyn, people say, "What's that, a pizza with pineapple?" But then again, we were one of the first places that started making salad pizza, and people thought that was odd. Like salad on pizza? What do you do, do you heat it up? But you know what? We sell a lot of salad pizza now. 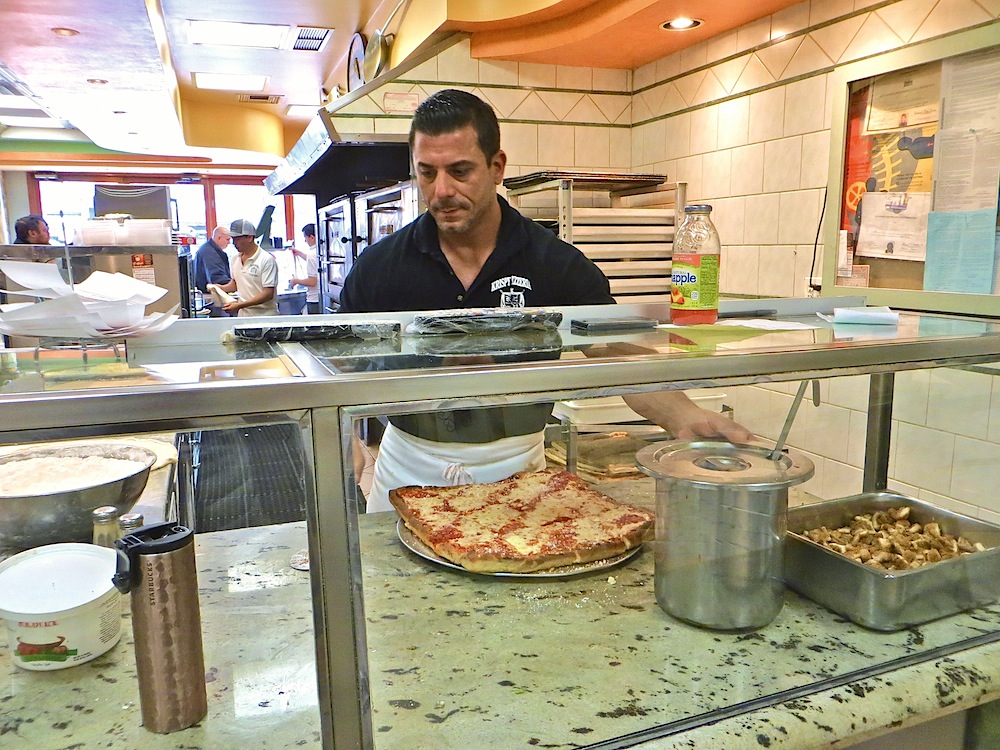 So what's a typical day here like for you?
I work behind the counter. I have enough employees, so basically I'm just looking around, making sure. Thank God I have good employees, but as an owner you always have to make sure everything looks right, make sure the pies are cooked well, make sure the deliveries are going out on time, make sure that people get served fast enough. So my eyes are everywhere. That's the way you have to be in a business. Can mistakes happen? Yes. But you wanna limit those mistakes. Consistency means everything. You hear stories about other businesses that are not as good as they once were. I hate that. I definitely don't want that here. I'm always striving to make it even better, always looking to move forward, never backward. I guess I'm doing something right, since we're here over 45 years.

Has the neighborhood changed over the years?
Well that's one reason we do so well with our two New Jersey locations: a lot of people from this area moved over to those parts of Jersey. There are a lot of pizzerias there, but they're not Krispy, ya know what I mean? So they were happy once we opened up there. A lot of my customers that I haven't seen in years, I see them at those locations. But regardless if the neighborhood changes, people always eat pizza. I think pizza's one of those things, regardless of your nationality, people always eat pizza. Although obviously the pizza has to be good.

What's your favorite pizza here?
I always loved the traditional, regular slice. I like all of them. I like the vodka, I like the grandma slice, but just give me the regular plain cheese and tomato sauce pizza. Whether it's round or it's Sicilian, that's my favorite. And I eat a slice every day. I've been in the business for so many years, but I still eat a slice every day. Just one slice. I don't wanna make a pig out of myself.

Is there anywhere else you go for pizza? Any favorites?
To be honest, I don't really go to other stores for pizza. I've tried other places in the past, and don't get me wrong, if the pizza's good, I'll admit it. I'm not one of those people. But I wouldn't eat a pizza in this area. I'd feel funny if I ran into someone I know, or they recognize me. Because people are like, "He's got a pizzeria, and he's eating pizza here?" To me personally, it doesn't look good, unless I'm out of the neighborhood. I've been to Grimaldi's a long time ago, once. And I went to John's of Bleecker Street. It's very different. It's a brick oven, and it's very thin so you eat it with a knife and fork. Don't get me wrong, I'm curious to see what makes that pizza different from mine, but I wouldn't eat pizza in the neighborhood where people would know me.

Do you have any crazy or memorable stories from the many years that you've been here?
Do you remember when we had a blackout? I would say around 2000 [It was actually the Northeast blackout of 2003]. We didn't have lights for a couple days at least. We had dough prepared, but we couldn't make any more dough because we didn't have electric. So we used up all the dough, and we only made regular pies, and people were happy enough. They didn't have air conditioning, it was a hot summer day, and people were just looking to get out. I'll never forget, it come to be nighttime and we had flashlights just to check the pies, because it was so dark you couldn't look in the ovens. And my dad was like, "Alright, we're gonna have to do something here." So we got two cars, had 'em facing the pizzeria, and had 'em running with their headlights on just to get light in there. It was so cool. People at that point didn't care, they were just happy that they were able to get pizza. It was definitely an experience. We had candles on the table. It was like something out of a movie. Everybody else was closed on the avenue. We were the only pizzeria open, and we made the best of it. It was fun, but it was one of those crazy things. That's definitely a day I'll never forget. People was just happy.

Do you think any of your kids will end up running the business?
I'd definitely say my youngest one. Because he's not too fond of school. Kind of reminds me of me. The other day I was saying to my mom, "My son Joe, we're having a hard time with him in school," and she goes, "Well, the apple don't fall far from the tree." But regardless, both my kids work in the store. Even if I wasn't crazy about it when I was really young, I would work here. Eventually I learned to like the business. So my kids, yeah, they're not fond of being here, but they have to be here. It's always good to know something. I'm a firm believer of that: keep your options open. I want them to go to school. But if they don't wanna go to school, I'm gonna give them the same option my dad gave me and my brothers. If you're not gonna go to school then you have to work, and if they wanna work somewhere else, fine, they'll work somewhere else. I'm not gonna force them. But my theory is, if you're gonna work somewhere else you might as well work for yourself. This is something you can carry on. But we'll see what happens. Only time will tell. 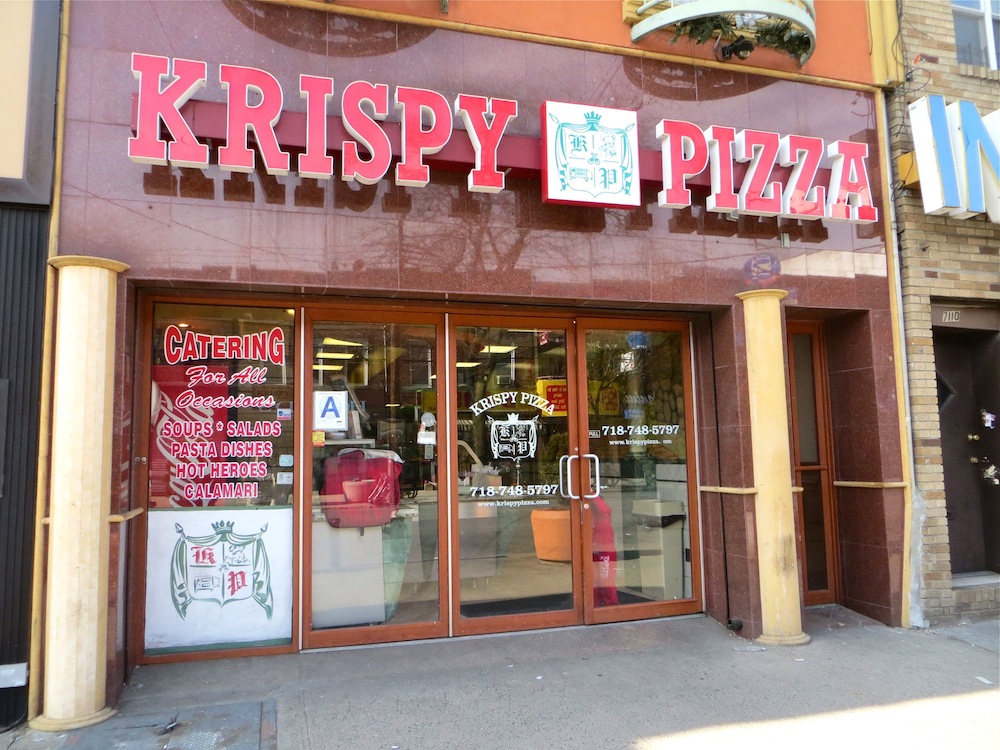