Yes, the first pizza with both tomato sauce and cheese was created in Naples in 1889 to commemorate a visit by Margherita of Savoy, the queen consort of the King of Italy — though Neapolitan pizzas made with tomato sauce and no cheese are probably far older. But where did pizza come from? Some say the original pizza was inspired by Middle Eastern pitas — the word itself originated in ancient Greece — while others claim the pie harkens back to Roman times, when a dish known as placenta featured a flatbread scented with bay leaf and smeared with cheese and honey. (In case you wondered, the tissue that surrounds the fetus is called placenta because it was thought to resemble the Roman flatbread.)

But ever since modern pizza was invented on the Lower East Side — big, communal pies heaped with a wide variety of ingredients, often delivered by small car — flatbreads originating in other places have groomed themselves to be like pizza for commercial purposes, proving that the appeal of pizza is undeniable — and international. Here's a selection of pizza surrogates from other nations found in the New York area.

Pitas, Pitzas, Pides, Manakeesh: Around 1995 a place called Moustache Slow Food, owned by a Jordanian and an Iraqui, opened on Atlantic Avenue in Brooklyn's Boerum Hill (offshoots still exist in Greenwich Village, the East Village, and the Upper East Side). One virtue of this place was that they made their own pitas, which sailed from the oven big and extravagantly inflated. While serving the usual purposes, these pitas were also used to make "pitzas" — flatbread discs smeared with tomato sauce and cheese, just the right size for a single diner. 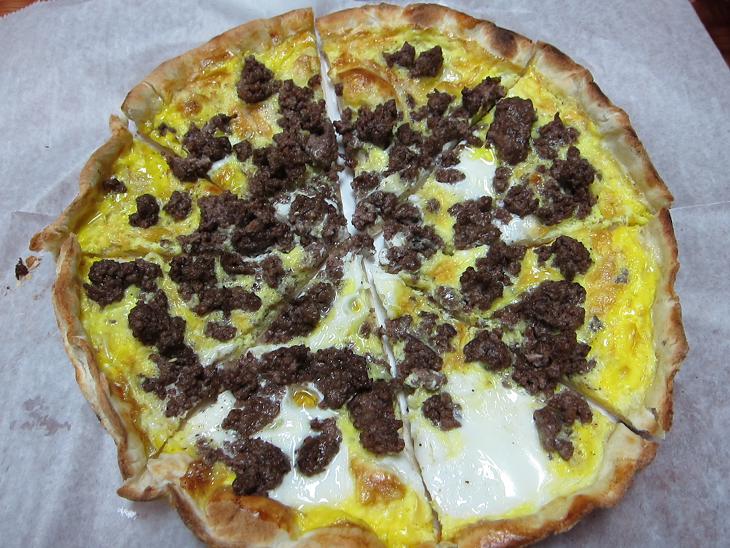 Meanwhile, Lebanese restaurants such as Bay Ridge's Man'ouche (now closed), started making bigger "manakeesh" flatbreads suspiciously like pizzas, one-upping the pitza makers with a product similar in size to the standard eight-slice pie. The most pizza-like manakeesh came coated with a puree of red pepper and tomato, while the best was paved with ground beef and eggs (shown above).

Not to be outdone, the Turks jumped into the breech, reconfiguring their own flatbread — called a "pide" — with toppings that allowed them to double as pizzas. Once again, starting around 2000, Bay Ridge became a hotbed of this activity, and today at Hazar, you can get a wide selection of pizza-like pides, some round, some shaped like boats, filled with such toppings as cheese, eggs, tomatoes, onions, green peppers, and sucuk, a dried, spicy salami. The Upper West Side's Seven's Turkish Grill slings a similar sort of pie, some examples of which are unabashedly called "Turkish Pizzas." 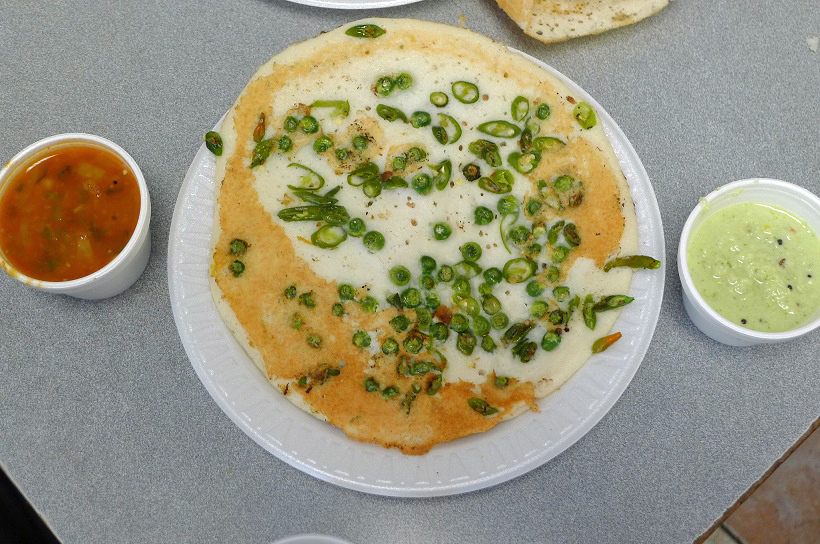 Utthapam: Originating in India circa 100 A.D., utthapam is a circular flatbread made from a batter of fermented rice and lentils, embedded with vegetables that can include tomatoes, chiles, carrots, onions, and peas. It's often served with a pair of chutneys and sambar soup, and modern South Asian menus sometimes refer to them "Indian pizzas." Utthapams are a staple of Southern Indian cafes that also sell other dishes made with similar fermented batters, including dosas, iddlis, and vadai. The batter often has a slightly sour edge, and the texture of the cooked utthapam is spongy; nevertheless, the effect is not un-pizzalike. (Shown: green chile and pea utthapam at Dosa Hutt in Flushing) 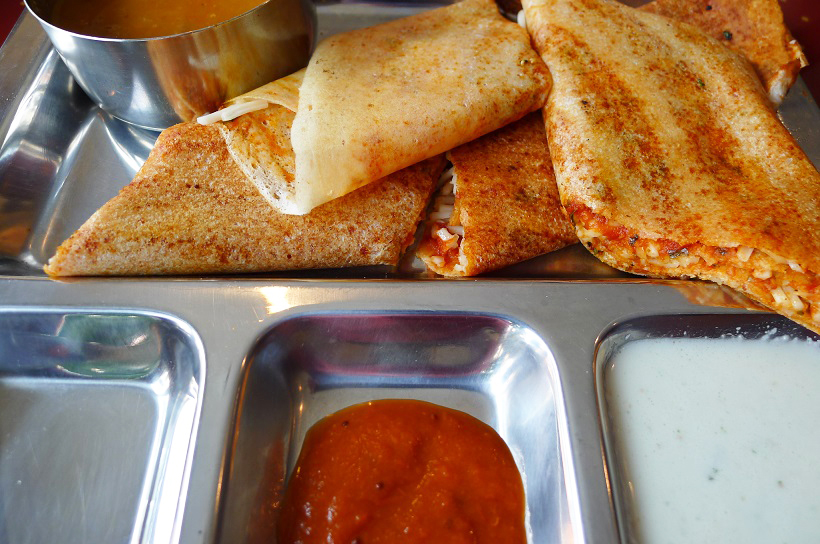 Pizza Dosa: Even more pizza-like than utthapam is the pizza dosa, which has lately appeared in restaurants specializing in South Indian cuisines. The similarity lies not in the configuration of the dosa, which most commonly consists of a crisp pancake rolled around a potato filling. Rather, instead of the potato or mixed-vegetable filling, the pancake is painted with bottled spaghetti sauce and sprinkled with pre-grated supermarket mozzarella or provolone. The result is repulsive, and one suspects the dish is aimed at children of immigrants who, like all American children, insist on eating pizza almost exclusively. The pizza dosa represents the previous generation's attempt to meet the kids halfway, with a pizza-flavored version of a starchy South Indian standard. (Shown: pizza dosa at Jersey City's Chennai Flavors) 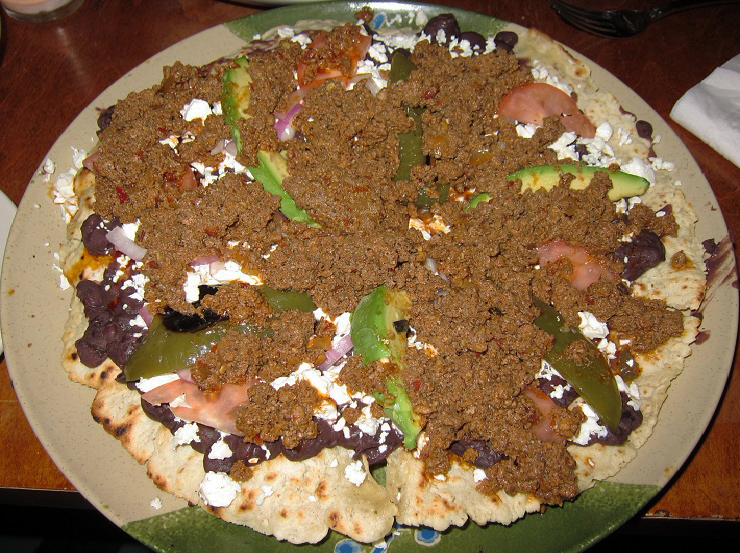 Tlayuda: Also commonly spelled clayuda, the tlayuda is the closest thing Mexicans have to a pizza in any of their regional cuisines. It originated in Oaxaca. Tragically, we have only one example in New York, at Casa Mezcal on the Lower East Side (shown above). (Unlike L.A., New York has no Oaxacan restaurants, which is a shame because it's one of the world's greatest cuisines.) Tlayuda consists of a giant rustic tortilla heaped with things like chorizo, avocado, chiles, tomatoes, herbs, and greenery, and really does read almost like a pizza — with a corn-based crust. 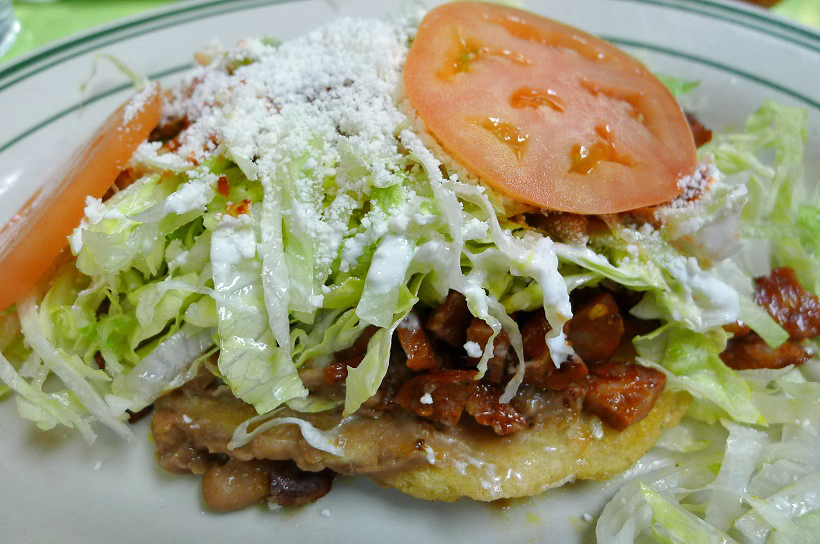 Huarache: On the other hand, their Mexican neighbors the Pueblans have any number of flatbreads patted from masa that could handily stand in for pizza. One of the largest is the oblong huarache, shaped like the sole of a rubber-tire shoe. Typically, the topside is dotted with meat, then salad is heaped on top with crema and various salsas. The result is like one of those pizza slices that has prosciutto and arugula dumped on top at room temperature after baking: ultimately satisfying, but not really pizza. (Shown: carnitas huarache at Taqueria Coatzingo, Jackson Heights) 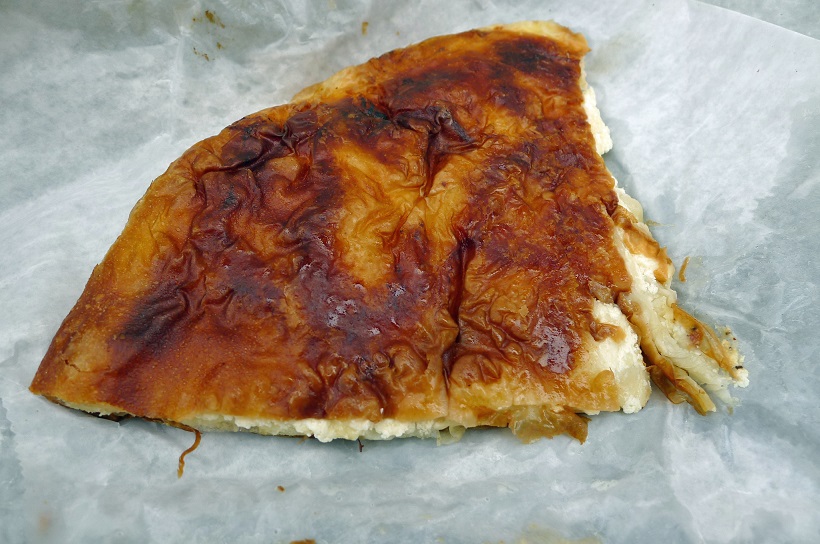 Burek: When Balkan refugees arrived in the city after the siege of Sarajevo, they set above recreating one of their most beloved snacks. The burek is a flaky pie that, in one of its most popular configurations, resembles the pizza in size, though the stuffings are often limited to ground beef or lamb, white crumbly cheeses, spinach, and, more rarely, pumpkin. The immigrants soon discovered that our neighborhood pizza ovens were the perfect thing to cook bureks in, and moved into pizza parlors in neighborhoods like Astoria, Ridgewood, and Pelham Parkway. In some cases they continued to make pizzas alongside their own bureks. In others they abandoned pizzas entirely, and just made bureks. (Shown: cheese burek at Burek's Pizza in Ridgewood.) 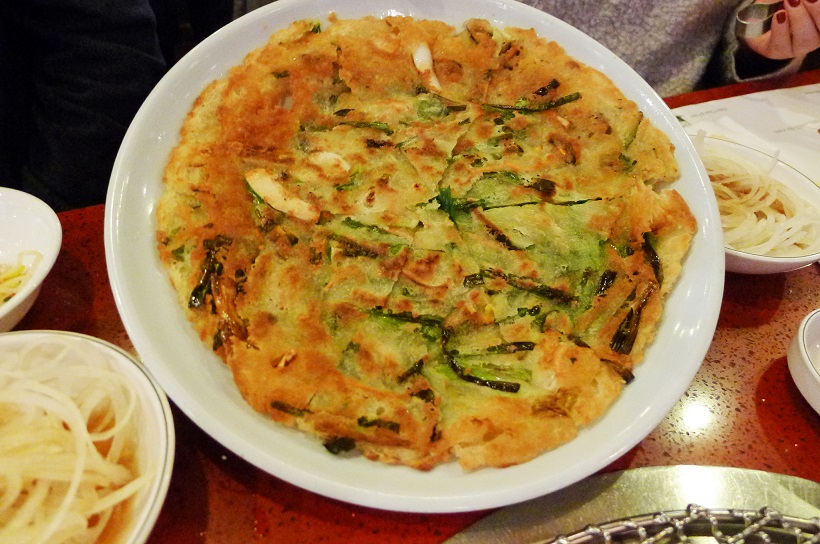 Pajeon: Korean pajeon can be quite pizza-like in some of its evocations. The round pancake is made from a simple batter of flour, salt, water, and sometimes soybean paste, then studded with scallions and seafood. Sometimes the filling – which sinks into the pancake – is heady with bright red kimchee, which enhances the illusion you're about to eat a pizza. (Shown: seafood pajeon at Mapo in Murray Hill, Queens.)