Sietsema's Superlatives: Pizza at its Most Extreme

Share All sharing options for: Sietsema's Superlatives: Pizza at its Most Extreme

The parameters of pizza are well established: dough, sauce, cheese, plus maybe some other stuff. But within that simple formula, wide variation is possible, with pizzaioli sometimes given to pushing the doughy envelope. Here are a dozen slices, pies, and pizzerias that are, for better or worse, poised on the frontiers of pizza-making. 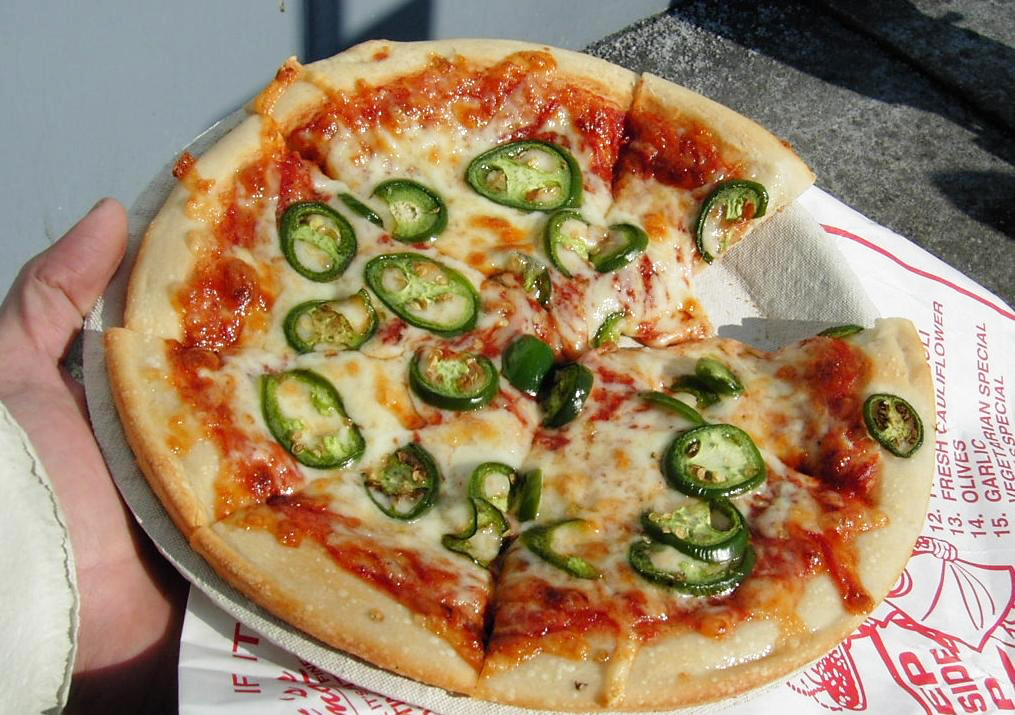 Spiciest Pizza — If you want your pizza spicy, you usually shake on the Calabrian crushed red chiles from the plastic jar on the counter, where it can be found along with its pals granulated garlic, black pepper, table salt, and truly awful dried cheese. But at Indian-leaning and long-running (founded 1967) Singas Famous Pizza in Elmhurst, fresh slices of green jalapeno are rained on the small pie — seeds, integuments, and all, searing the mouth like a soldering iron. 8286 Broadway, Elmhurst, Queens, 718-651-3190. 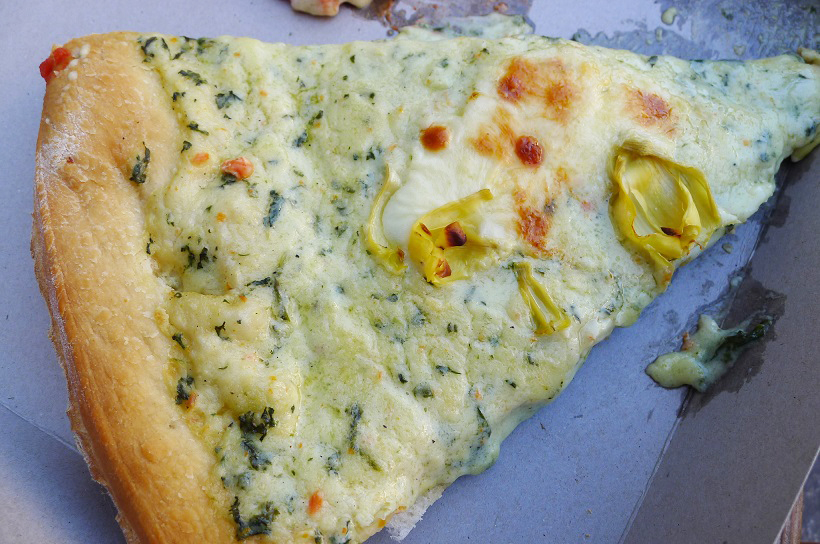 Soupiest Slice — In the manner of its Staten Island inspiration Goodfella's, Artichoke Basille's Pizza concocts an artichoke pie that seems as if cream of artichoke soup has been spilled over the top, retaining all its dampness and liquidity as the pie bakes. The result is like custard. It demands to be eaten with a knife and fork (yes, Mayor De Blasio was right!), and you'll either love it or hate it. 328 E 14th St, 212-228-2004. 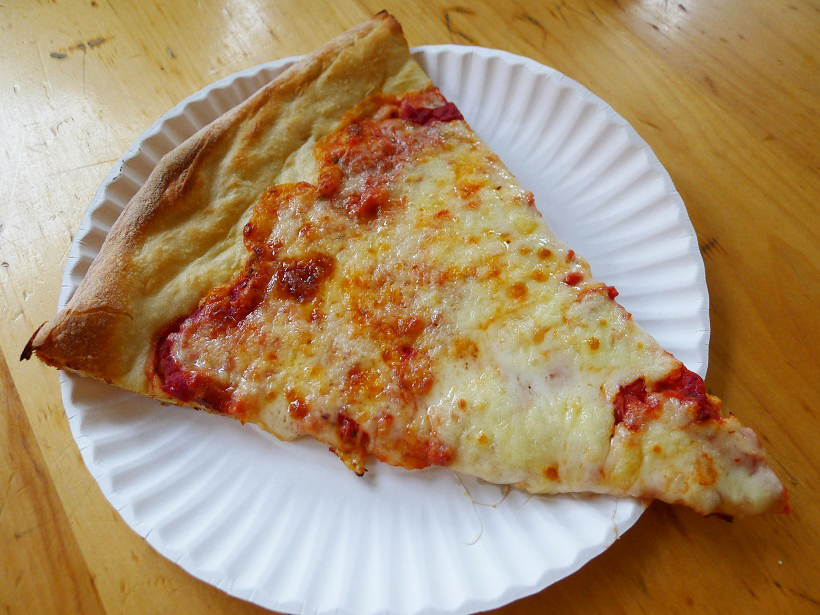 Cheesiest Pie — Famous Ray's and its ilk blanket their slices with some sort of plastic dairy substance, but it doesn't quite qualify as cheese in my book; instead we're looking for lots of cheese that tastes good enough to register as cheese. In this case, old-timer Ben's in Greenwich Village sports the largest mass of decent cheese on any pie of our acquaintance. 123 Macdougal St, 212-677-0976. 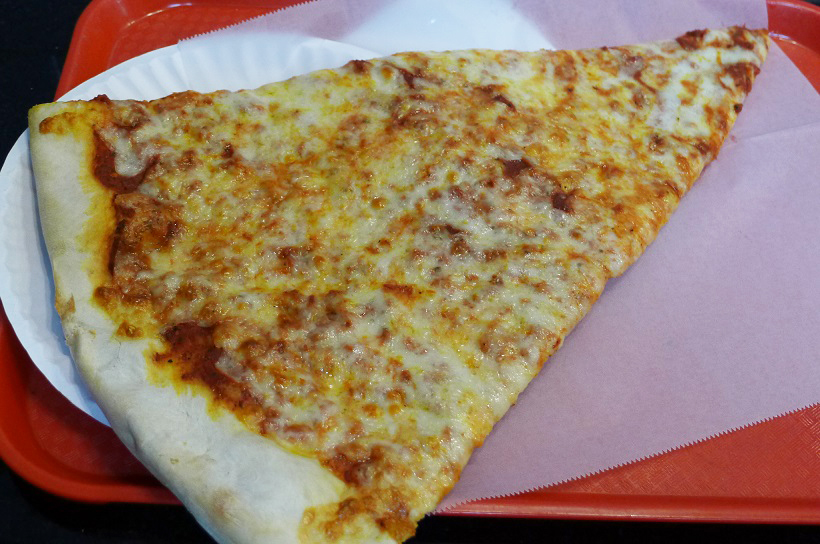 Largest Slice — Most diners do a double take when they first espy the slice at Koronet. The branch near the Columbia University campus (there's a newer one in Washington Heights) makes you suspect this humongous slice — 14 inches from the point to the "bone" — was invented as a way of feeding hungry students economically. (The white paper plate shown underneath in the picture is the standard size of most slices.) At $3, it provides complete satiation, but the real miracle: it's a damn fine slice. 2848 Broadway, 212-222-1566. 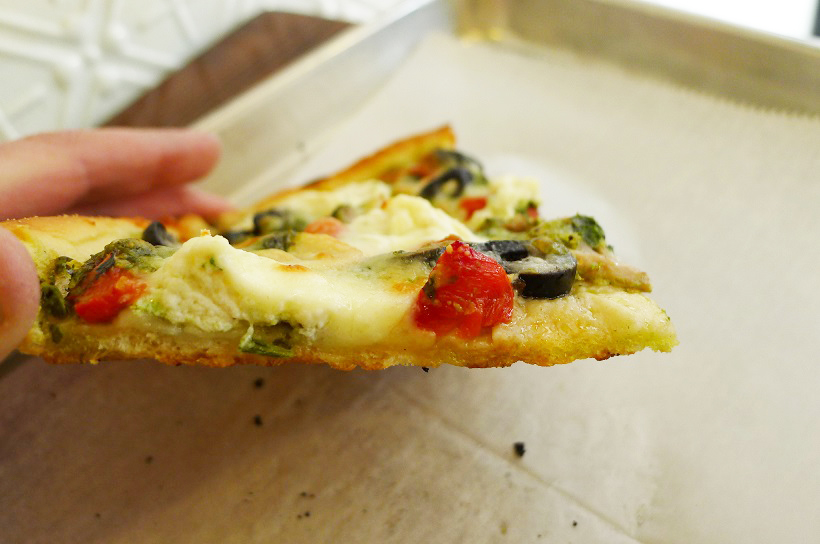 Thinnest Crust — In our carbo-phobic age, pizzerias, as well as Italian restaurants that serve pizza as a sideline, sometimes flaunt the thinness of their crusts, negating the obvious truth that pizza is a form of bread. Still, certain pizza parlors have been making thin crusts all along as an aesthetic decision, and the best of these is Rizzo's Fine Pizza Co., which established its first branch in Astoria in 1959. The square slice has a crisp ridge around the perimeter, while the part beneath the topping remains supple, yet exceedingly thin. 30-13 Steinway St, Astoria, Queens, 718-721-9862. 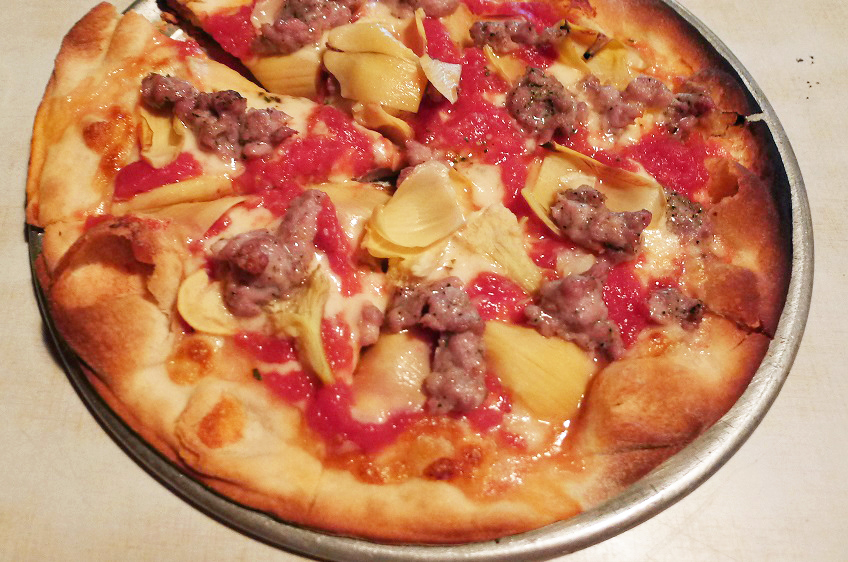 Crispest Crust — Other thin-crust pizzas cultivate a crisp crust underneath the toppings, suggesting that the crust has been well-cooked even before the tomato sauce and cheese have been applied. Many examples of this type can be found in bars, and king of the bar pies is Lee's Tavern in Dongan Hills, Staten Island, where the crust is a species of crunchy and delicious cracker, as is the case with the individual bar pie shown here. 60 Hancock St, Staten Island, 718-667-9749. 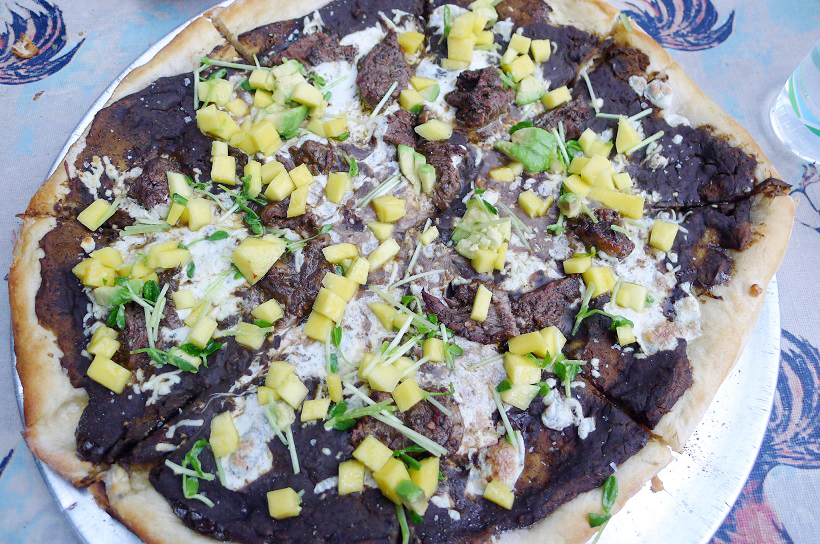 Strangest Toppings — Many places vie for this distinction, usually with a single oddball pie or two, but Pete Zaaz in Crown Heights has the strangest list of ingredients imaginable, starting with its excellent baked potato pie, featuring an eye-socking combo of purple Peruvian potatoes, cheddar cheese, bacon, and crème-fraiche. Even weirder was the offering early on (the short roster of pies changes regularly) of a pie topped with refried black beans and mango. I didn't say good, just strange. 766 Classon Ave, Brooklyn, 718-230-9229. 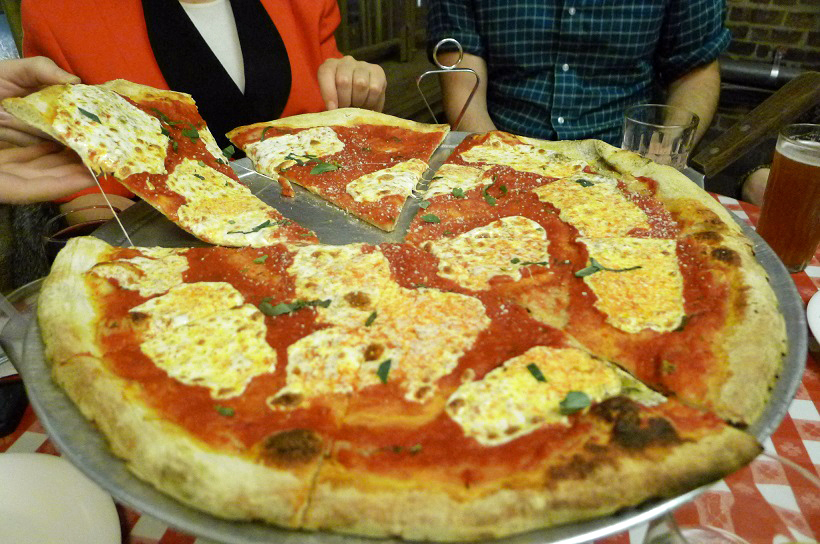 Oldest Pie — Pizza as we know it was invented on Spring Street at the nation's first pizzeria, Lombardi's, in 1905 by Antonio "Totonno" Pero — though he'd probably been making pies and delivering them to the same location for a year or two already, back when the place was an Italian neighborhood grocery store. Pero went on to found his own pizzeria in Coney Island, but part of his glory lives on at Lombardi's, where the margherita (called Our Original Pizza) still represents our original link with the pizzas of Naples. 32 Spring St, 212-941-7994. 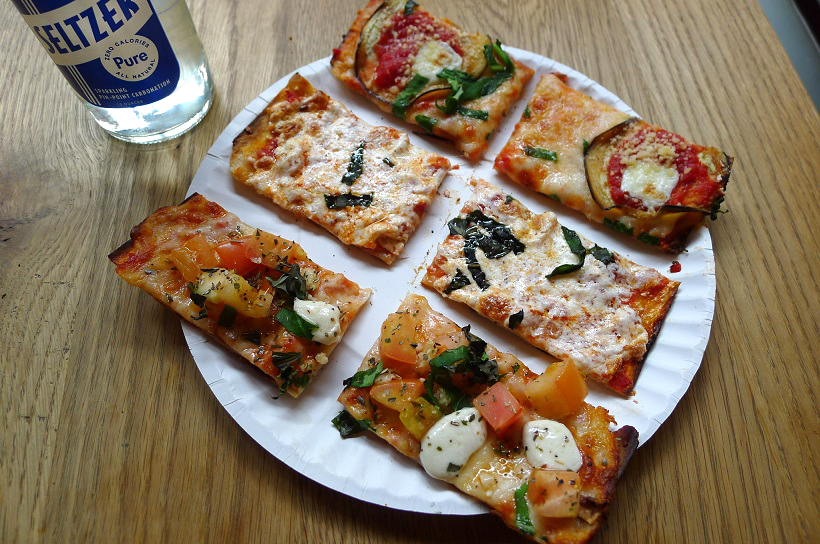 Most Religious Pies — Every year come Passover time, pizzeria Pie By The Pound —whose gimmick is selling its oblong, thin-crust pies by the weight of the segment you select — makes a special line of pizzas with a crust made from unleavened matzo. Making them almost like the bar pies of Lee's Tavern (see Crispest Crust, above). And while the toppings are by no means kosher, the pizzas help you stay in the spirit of the holiday. 124 4th Ave, 212-475-4977. 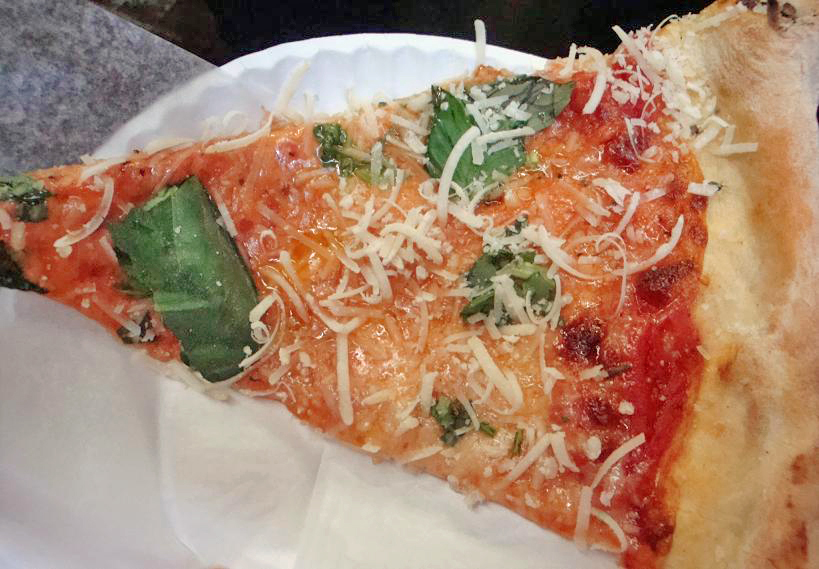 Most Fussed-Over Pie — Anyone who has seen the sainted pizzaiolo Dom DeMarco at work at Di Fara Pizza knows there's no more painstaking artisan in the city, no matter what the medium. As a pie is cooking, he removes it, adds some more freshly grated cheese, pops it back in the oven, then removes it again to add fresh herbs. It's a miracle his pies are ever completed and sold. But if you've ever tried one, you'll agree it was worth it. 1424 Avenue J, Brooklyn, 718-258-1367. 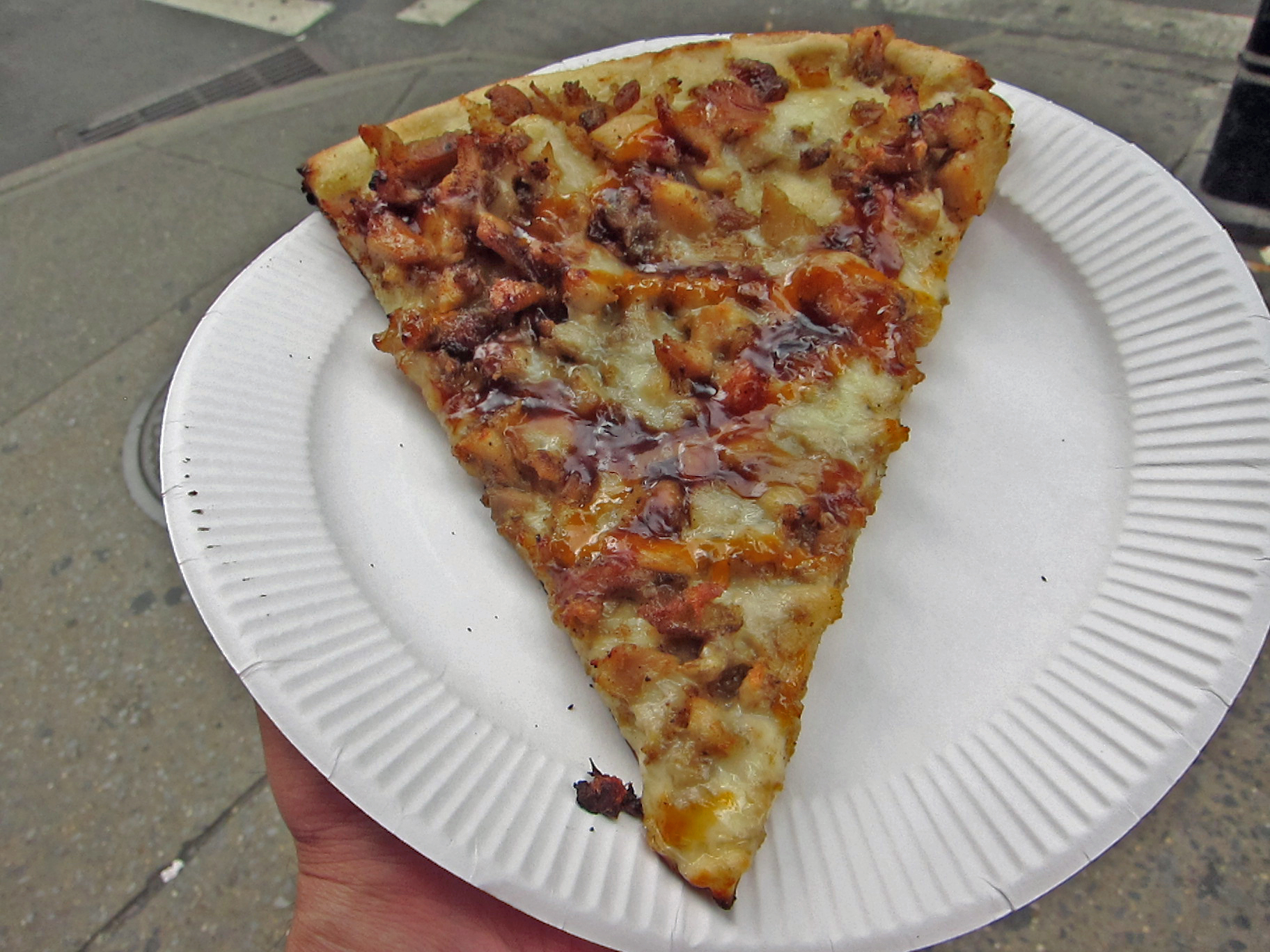 Worst Slice — The sauce is dark and way too sweet, the meat topping — supposedly, chicken — is indistinguishable from TVP (Textured Vegetable Protein). Handily acing out many slices of the "Hawaiian" ilk (canned pineapple and boiled ham), Roll and Go's teriyaki slice is probably the city's worst pizza, a twin insult to both Japan and Italy. I say probably, because there must be a slice lurking out there that's even worse. 570 8th Ave, 212-925-7655. 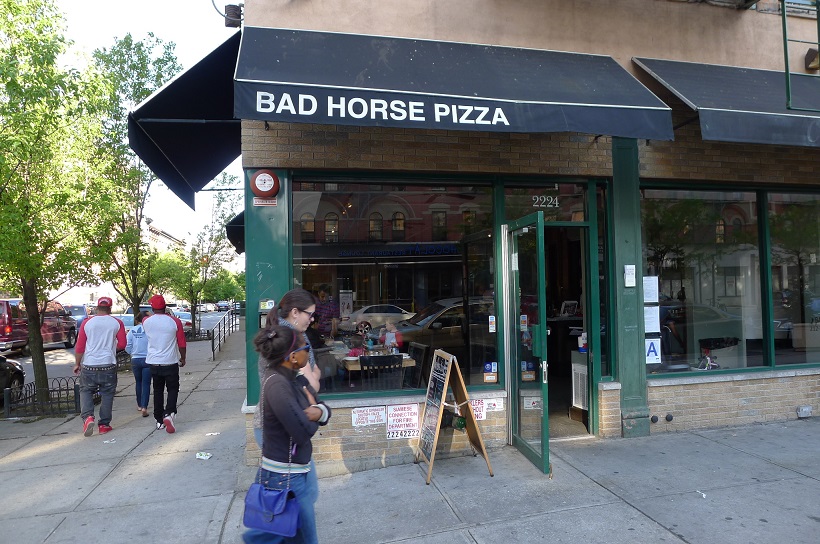 Worst Pizzeria Name — A cursory search of the web will reveal there's a pizza parlor named Herpes in Swindon, a town directly west of London. Nobody can beat that for grotesqueness, really, unless there's a Smegma Pizzeria out there somewhere. All we can do is offer our own badly named Bad Horse Pizza, located in southwestern Harlem. Whether the name suggests pizza made with rancid horse flesh, or simply the disapproval of misbehaving horse, the name itself discourages you from eating there. 2222 Frederick Douglass Blvd, 212-749-1258.