Pete Wells digs Jeremiah Stone and Fabian von Hauske's "expressive cooking" at Contra on the Lower East Side. The critic thinks that the $55 tasting menu format totally works for this ambitious Orchard Street restaurant. Here's his take on the style of cuisine:

I'm not enthusiastic about what strikes me as a Northern European phobia of spices, but I came to admire their restraint with salt and added fat. You can see this approach catching on among other young chefs, some of whose food gets lumped in with the New Nordic movement. A more accurate name for their quiet, naturalistic, drama-averse approach may be mumblecore cuisine. Contra, at the moment, pulls it off with an originality that is sometimes dazzling and always worth following. 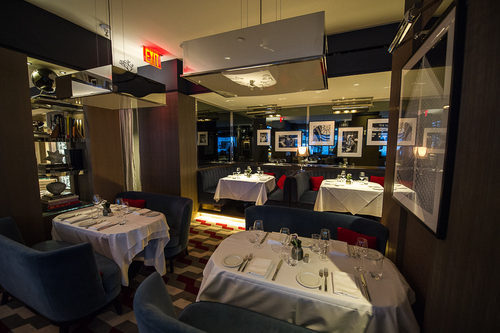 [The Regency Bar and Grill by Krieger]
Steve Cuozzo likes Dan Silverman's lunch and dinner menus more than the "power breakfast" served at The Regency Bar and Grill: "Scrambled eggs are seductively buttery, muffins crisp. Jams include sugar-free strawberry, a rare and welcome amenity. But the bitter, badly brewed coffee might short-circuit the room's fitful power surge. The lunch and dinner menus confidently stroll the globally influenced, modern-American playbook. Silverman seasons first-class raw materials as boldly as if he were still downtown." [NYP]

Alan Richman gives one star to Margaux, and two stars to Narcissa. On the latter: "An appetizer of rotisserie beets were marvels of slow cooking—the darkest crimson, the deepest flavor, beets for the chilliest winter day. A poached egg was brought to the table and daringly plopped from pan to buttered-mushroom-laden plate, where it miraculously failed to explode. My compliments to the impressive waitstaff. It can do much more than merely keep an egg intact." [GQ] 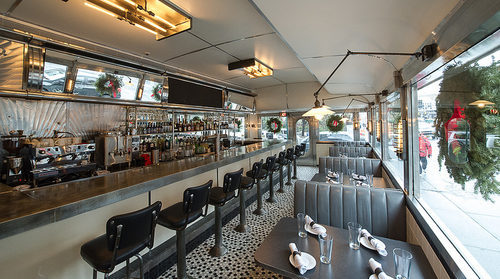 [Empire Diner by Daniel Krieger]
Stan Sagner finds an uneven menu at Amanda Freitag's Empire Diner. One of the clunkers: "An unhappy stab at Oyster Pan Roast ($16) simply capsizes. Bearing little resemblance to any version of this dish I've encountered, precisely three lonely oysters are adrift in a tepid puddle of milky broth, home to withered bits of pork belly and a circular raft of soggy pumpernickel. I'd have done better with a second Patty Melt. Or dessert." [NYDN] 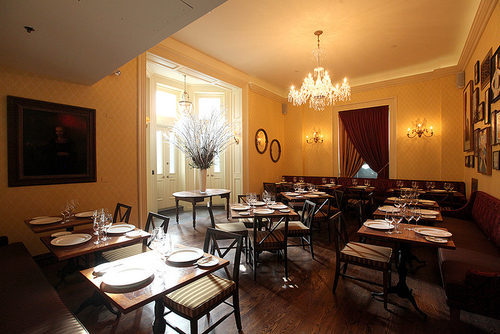 [The Peacock by Bess Adler]
Daniel S. Meyer is not blown away by The Williams hotel's two new restaurants, The Shakespeare and The Peacock. On the latter: "The Peacock's food isn't particularly worthy of its dapper digs. Short-rib pie ($26) features melting hunks of beef and flaky puff pastry, marred by the unrelenting funk of Stilton. Lamb curry ($27) vexes too, tender-enough meat wronged by watery sauce and mushy rice." He gives both restaurants three stars out of five. [TONY] 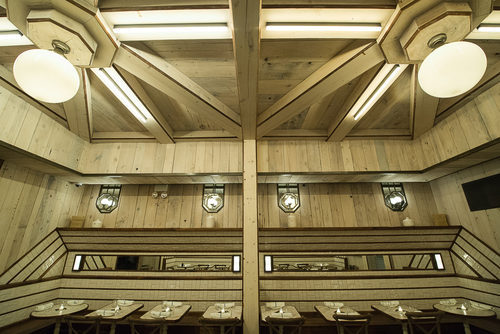 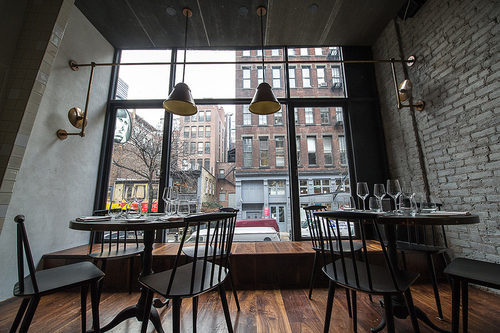 [All'onda by Krieger]
THE BLOGS: Serious Eats editor Max Falkowitz thinks that All'onda is a good addition to the neighborhood, The Food Doc files a detailed report on Momofuku Ssäm Bar's new brunch menu, Immaculate Infatuation's Andrew Steinthal is not impressed by Apartment 13, Eat Big Apple checks out Sunday brunch at Ai Fiori, The Pink Pig has an okay meal at The Cecil in Harlem, Joe DiStefano recommends ordering the Norwegian cod at Bo's, Goodies First finds decent food and disorganized service at The Runner, and NY Journal has a pleasant time at Gallaghers in Midtown.