Francis Derby's Morcilla at The Cannibal

Share All sharing options for: Francis Derby's Morcilla at The Cannibal 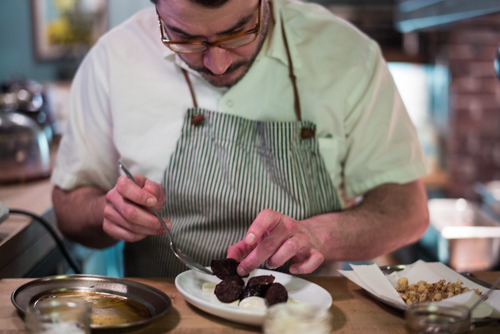 "Practically every culture has a form of blood sausage, but everyone seems to cook boudin noir in New York," says executive chef Francis Derby of The Cannibal. "Since this restaurant is a study in meat why not explore all of the varieties?" he asks. To this end, he recently started serving a Spanish blood sausage called morcilla at The Cannibal. Like practically everything on the meat-centric menu it is housemade from scratch, with an eye towards sustainability and nose-to-tail dining. Derby uses pork shoulder and fatback sourced from Berkshire hogs that he then seasons with a proprietary blend of spices before mixing with onions, garlic, rice, and the pig's blood. He then stuffs the mixture into a natural hog casing.

Rather than using the traditional technique of steaming the sausage, Derby uses a Controlled Vapor Technology oven. The dish is garnished with a cauliflower puree as well as sautéed cauliflower and hazelnuts, receiving a final drizzle of cider gastric before being sent out. "The dish is very much about winter," the chef explains. "There are a lot of bass notes," he says referring to the flavors of brown butter, blood and pork fat. But because herbs are scarcer during this season, he chose to brighten the dish with the cider gastric to bring some acidity and sweetness to the proceedings.

Here is a look at Derby making sausage.

Editor markup for Francis Derby's Morcilla at The Cannibal. This is only visible in the story editor.

· All Coverage of The Cannibal [~ENY~]