Behind the Plywood at FiDi Gamechanger Brookfield Place

Share All sharing options for: Behind the Plywood at FiDi Gamechanger Brookfield Place

Brookfield Place, formerly known as the World Financial Center, is undergoing a $250 million renovation that is set to be completed in conjunction with the unveiling of the nearby One World Trade Center in 2015 (although the two projects are operated completely separately). The overall renovation will feature a luxury goods mall with tenants like Burberry, Hermes, Salvatore Ferragamo, Michael Kors, and Judith & Charles, as well as a big outdoor event space next to the marina on the Hudson River. A large portion of the retail space is also dedicated to food and dining. The way things are shaping up, Brookfield Place is fast on its way to becoming a gamechanger for the neighborhood. Here's a peek behind the plywood:

A 25,000 square foot French food market called Le District is under construction with an opening slated for later this year. There is space for six new stand-alone restaurants, joining P.J. Clarke's, which is already open in the complex. Parenthetically, the Institute of Culinary Education (ICE) will be relocating its campus to Brookfield Place from the Flatiron District next year, bringing thousands of culinary students to the area.

But first out of the box will be a collection of some of NYC's most celebrated fast casual and street food restaurants, which will share 35,000 square feet of communal space overlooking the Hudson River. 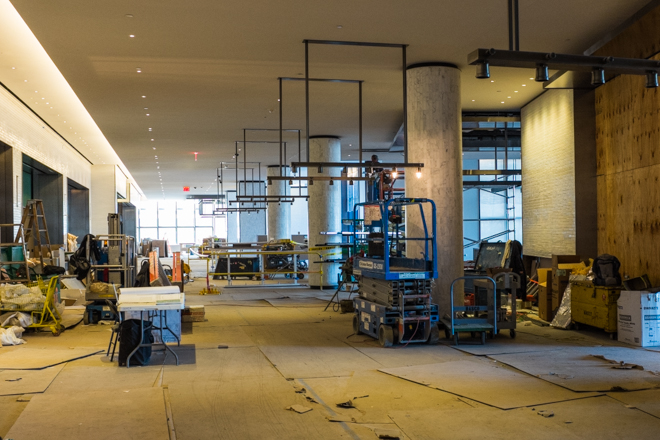 The space is being designed by AvroKO and features approximately 600 communal seats. Each vendor will occupy a kiosk (approximately 700 to 1000 square feet each) on the periphery. The space will also have three large, stand-alone islands which will house Tartinery, Blue Ribbon Sushi, and Dos Toros taqueria. 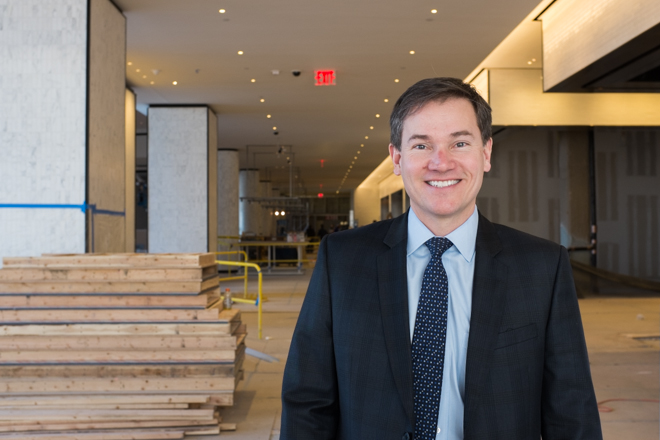 Perhaps understandably, Edward Hogan, national director of retail leasing for Brookfield, bristles at the project being called a food court, fearing the negative evocation of the suburban shopping mall populated by fast food franchises, pan-Asian buffets, and rampant teenagers. Indeed, the artist rendering of the space from Brookfield's own glossy prospectus brochure shows only professionally dressed adults milling about a sophisticated, modern space.

Rather than offering the kiosks as concessions on the open real estate market, Brookfield sought out partnerships with each vendor for Hudson Eats directly. Hogan had the enviable task of researching and selecting them personally. He did a lot of eating, using food blogs and social media to hone in on potential partners. There were several considerations beyond being simply delicious. The prospective vendors needed to be able to not only deal with preparing food in the relatively cramped kiosks, but also handle an anticipated high volume. The adjacent outdoor space that reaches to the Hudson River will be used for over 100 events a year, including live concerts that will flood the facility with thousands of potential diners.

Leo Kremer of Dos Toros is also enthused by the design. "It is modern but not cold," Kremer explains. The restaurateur says that he finds it refreshing to work with a blank slate, rather than shoe-horning a restaurant into an existing space, as Dos Toros has been forced to do at its other locations. The Hudson Eats kiosk is being built specifically for them, and it will reflect the stripped down aesthetic of the chain's other locations. 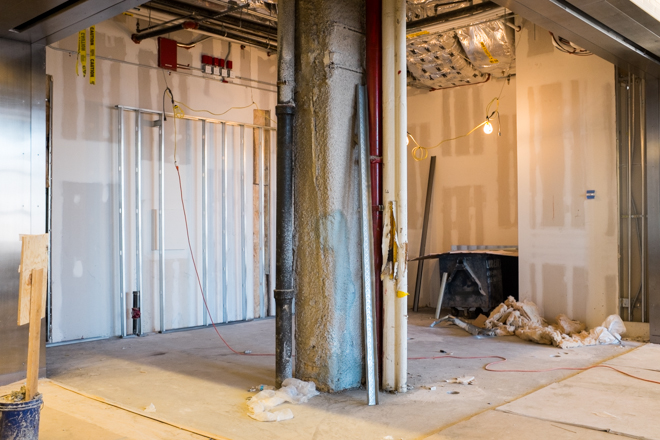 Hogan suggests that vendors were given the option of pairing down their menus, but so far none of them have done so. Mangum and Kremer confirm that their menus will be the same as the ones offered at their other restaurants. While most vendors will prepare all of the food at Hudson Eats, Mighty Quinn's will smoke its meat at an off-site commissary and truck it to the location. Although each vendor has basement preparation and storage space in addition to the kiosks, the system isn't designed to accommodate smoking meats for 16 hours a day.

Because Brookfield wants to strike a balance of options, there will be "healthy" choices from Chop't, the popular salad chain, and Digg Inn, which offer a vegetable-heavy menu. But sometimes Hogan went with his gut. "I heard about a grilled cheese sandwich on the Lower East Side," he says of Little Muenster. "I make grilled cheese sandwiches for my kids all the time, but not like that."

Because of the nature of the partnership with the vendors, Hogan has helped them navigate the intricate certification process personally. "This is a union job, and that can pose challenges," he says, noting that most restaurants do not generally deal with union labor. Hogan confirms that many of the vendors will apply for liquor licenses, but they will do so individually, not collectively under the Hudson Eats umbrella.

If the selection of boutique vendors in a communal space designed by AvroKo sounds familiar, you have probably heard of Gotham Market West, which opened uptown recently to considerable fanfare. That project is also a food court, but doesn't generally get referred to as such because they cleverly wove the word market into the name. Despite this, Gotham West Market and Hudson Eats are clearly cut from the same cloth. "We actually started this project before them," says Hogan. But since Hudson Eats is a far more ambitious project, and part of a larger development, it is natural that it should take longer.

Both Gotham West and Hudson Eats do share thematic elements beyond the design. They, along with Smorgasburg in the Whole Foods supermarket on the Bowery and the now defunct Food Parc, represent the upward evolution of the food court. It could be argued that the this type of curation first found expression not in retail outlets at all, but in food festivals like Meatopia and the Great GoogaMooga and outdoor markets like Smorgasburg in Brooklyn or Madison Square Eats in Manhattan. Indeed, Mighty Quinn's started out as a Smorgasburg vendor before opening a brick and mortar location.

Sitting directly beneath Hudson Eats will be Le District, which appears to be a French counterpoint to Eataly, the high-end Italian supermarket that has an outpost in the Flatiron District. Whereas Eataly is part of a larger chain, Le District will be the first of its kind. It will be operated by restaurateur Peter Poulakakos of the Poulakakos Group, and promises to bring the "best purveyors…with tasting menus by renowned French chefs" to Brookfield Place. Le District is slated to open later this year. 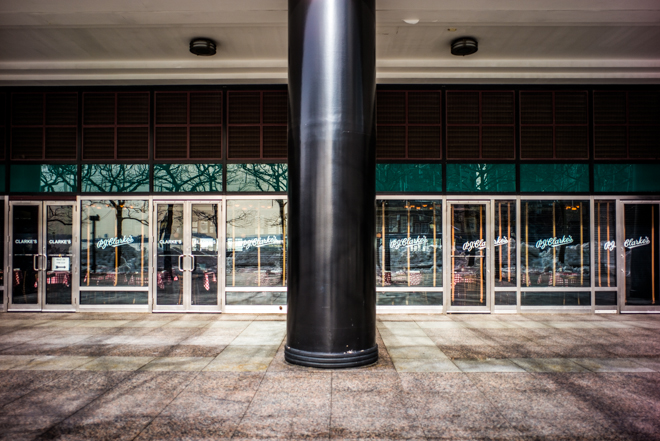 P. J. Clarke's, the fabled Midtown saloon, opened the first of several NYC outposts at what was then called the World Financial Center in 2006 (there has been a P. J. Clarke's franchise in Chicago since the mid 1980s). The restaurant occupies a huge swath of space opposite the marina. The six new restaurants will line up on the other side of the same building along Vesey Street. So far only Parm, the celebrated Mulberry Street Italian-American restaurant from chefs Rich Torisi and Mario Carbone, has been announced. The other restaurants are as yet unnamed, but Hogan promises that they will be selected to offer a diverse set of options. You are not going to see three Italian restaurants in a row, or, for that matter, stratospherically expensive ones — Hogan wants to install "neighborhood" restaurants.

But is there a need for a neighborhood restaurant? Is there even a neighborhood to speak of? According to Hogan there is not a significant amount of residential housing in the immediate area. Around 20,000 people live in the vicinity of Brookfield,of the approximately 120,000 total residents in the lower Manhattan area as a whole. But that is a number that is dwarfed by the daily influx of office workers and tourists, the groups that Hogan sees as providing the bulk of the business for Hudson Eats.

The renovation is not entirely without casualties. The old food court, which was located north of the Winter Garden, was demolished to make way for the new luxury goods mall and the vendors that populated it were not asked to return. The food truck court currently located on North End Avenue that was set up as a stop gap measure until the construction of Hudson Eats is complete will cease to exist once the food court opens. While many of the Hudson Eats vendors are certainly affordable, there will be, for example, no dollar slice joints, no hot dog stands, no diners, and frankly, no entity that doesn't exist somewhere else. All the restaurants represented so far are part of larger chains, furthering the food court connotation. But it is worth noting that the vendors at Hudson Eats, putting aside Umami Burger which is from Los Angeles, are local concerns and not part of massive national corporations.

From the perspective of the vendors, the projects allows them access to a market that would have been impossible to reach otherwise, given the prohibitive cost of stand-alone rents in the area. But Mangum says there is an additional motivation: "I was here for 9/11. This project shows something about American resiliency."
· All Coverage of Brookfield Place [~ENY~]