Share All sharing options for: Marea's Liz Nicholson Shares Her Memories of 'Inoteca 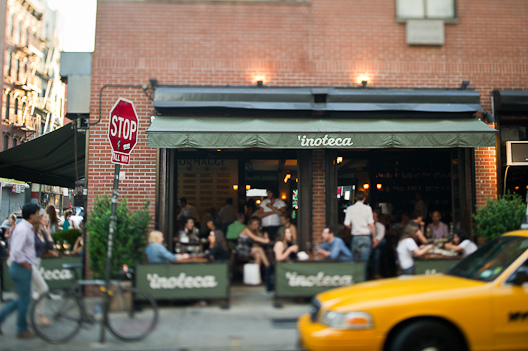 Liz Nicholson, sommelier at Marea: When I think of 'inoteca it is impossible to conjure just one story to mind. Instead it triggers so many that I find my emotions wrapped up with them, and as I try to write this I am smiling, occasionally laughing, shaking my head in disapproval, and placing my hand on my heart in a feeling of loss. From the first time I went there I can clearly remember looking through the all Italian wine list in awe, completely lost and yet unable to shake this strange desire to master it.

And so I started to work there in January of 2007 when it had been open 3.5 years. It's where I chose to abandon my path in fashion and instead teach myself Italian wine. It's where the names Valentini, Conterno, Soldera and Quintarelli were first presented to me in all their glory. It's where I sold my first $1,000 bottle of wine – the 1983 Alzero, and it happened when the guest stopped to chat with me on his way to the bathroom. It's the place where I learned to love wine and it turned out to be the gateway to my career.

And wine wasn't the only thing I learned there! I learned how to work hard and work fast - running around well into the wee hours, often coming home to watch the sun rise while I reflected on the night. It's where I befriended Michael Stipe and we talked sweaters, it's where I explained Bagna Cauda to Jessica Biel. It's where I learned dozens upon dozens of Italian cheeses and classic Italian cooking practices. It's where I learned that fried lemon wheels are actually incredibly delicious — ditto for Peroni and white wine (thanks, Stephen). 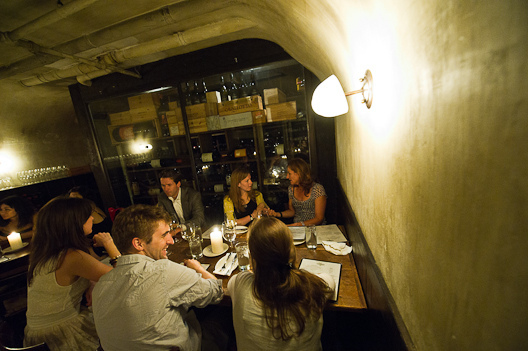 To think of the people I've known and the friendships born of those years. The saving grace of working the late nights were all the industry people who came in at those hours, some of whom I've worked with in one way or another in the years beyond. I remember vividly having a throw down argument with Levi Dalton over Olivier Theyskens as he dined at the bar late one night. I think of how I watched the LES "blow up" over my time there — when I started people rolled up on their skateboards, sleeve tats blazing, and eventually into an almost mob scene of scantily clad girls and overly-gelled guys in the streets on a Saturday night. It was like working in a fishbowl, watching a New York City neighborhood evolve and change at the corner of Ludlow & Rivington. It was a front row seat in the making of the history of New York.

But no trip down 'inoteca memory lane would be complete without the music. I could tell who was working the floor based on what sounds met me as I entered — everything from Morrisey, Phish, or Snoop Dog, to MGMT and TV on the Radio towards the end of my time there. I think of my friend Molly Pryor, who sadly passed just days before they announced their closing, I see her plugging in an ipod shuffle loaded with a 10 disc 90's mix, and a massive dance party ensuing that almost cost us our jobs.

And yet with all the rocking anthems that race through my head when I think of my time there my favorite music memory was a late night early in the week, we may have been totally empty and I had some list work to do. Feeling kind of mellow, I had just put on Joni Mitchell when a middle aged couple came in – not exactly the guests I would expect to see at that hour. Their mood could only be described as tense and they wanted something "quick". I got them some food and a carafe of white wine and as I kept my eye on them from across the room I could tell they were starting to relax. When I checked in with them they told me of their stressful day and I'll never forget she said something like: "If you had told me a few hours ago that we would be here, unwinding to Joni Mitchell over some wine and a panino I never would have believed it. You seem way too young to know who Joni Mitchell is, but I am grateful you are playing it right now. This has been the perfect ending to a disaster of a day." And for me, that is the way I will always remember the feeling of going to 'inoteca. 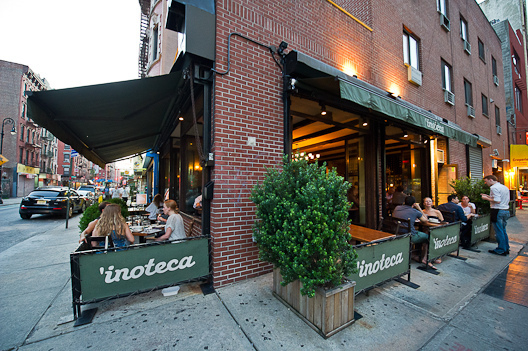 [Krieger]
It was a haven for so many over the years – doesn't matter how your day was going before, upon walking in the door it was totally disarming, and to be completely honest, inspiring and indulgent. Maybe you splurged on a nice bottle of wine, maybe you ordered a 7 cheese plate instead of a 3, maybe you stayed out way later than you intended. But you left with a smile on your face, feeling way better than you did before you got there, and maybe you, like me, left that much more intent on reading up on Italian wine. That place gave birth to a great passion for me, and for that (and all the good times) I can never express my deep gratitude. Thank you to Jason, Joe, Eric and Ethan for bringing 'inoteca into our lives.