Share All sharing options for: On its Final Night, Jeffrey Tascarella Remembers 'Inoteca

Levi Dalton, Eater Wine Editor: Time was, I used to be at 'inoteca. Not occasionally, or sometimes, but all the time. Which wasn't that unusual back then, because everyone else was there, too. At least that was how it seemed at the time. Chefs, bartenders, wine folks, girls, guys, whatever hipsters were called before that term got overused, they were all there. It was pretty much always packed at 'inoteca.

Now that the place has one last service left, tonight, I reached out to a few people who used to work there for some memories. First up: Jeff Tascarella, now GM of The NoMad, once a wine guy at 'inoteca. Here's what he said: 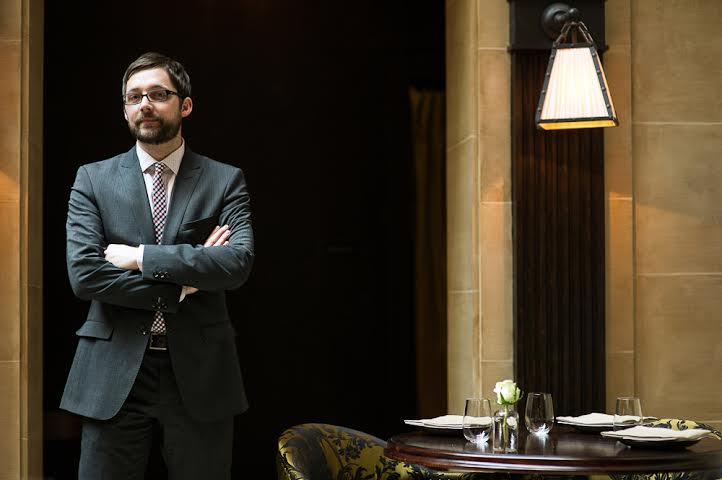 [Krieger]
Jeffrey Tascarella, GM of The Nomad: In the early part of last decade, when the crew at Fiamma had finished dividing the evening's spoils, there were a few ways things could wind up. If the night had been populated with bankers and movie stars and our pockets were heavy, we would head to Blue Ribbon to drink Champagne and eat oysters. If it were the middle of the summer, and money was tight, we would head to Milady's to dull our sorrows with Guinness and Marlboro Lights. Most nights, though, we headed to 'inoteca.

Goddamn we had fun.

They were open until 3 a.m. back then, and there was always a wait. We were regulars and in the business, and we could usually get those high tables by the windows. In the summer, those windows would be open, and we would watch the late night spectacle that was the still-gritty Lower East Side.

We would order platters of cheese and charcuterie, and they would be cheerfully delivered by that old lady with the short pink hair. There were always truffled egg toasts (better with bottarga), panini (legendary), and my favorite, those little crustless spicy chicken salad sandwiches (tramezzini).

The first time I enjoyed a beet was in the salad with orange and hazelnuts. The eggplant lasagna made a good case for vegetarianism. The pancetta-wraped prawns agro-dolce were near-genius. And even if the sauce on those giant meatballs was a bit too citrusy, they were pretty wonderful. 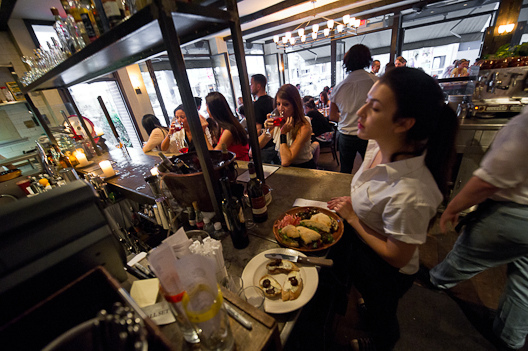 While the food and the vibe were amazing, you really came to 'inoteca for the wine. My buddies and I were all just getting started in restaurants, waiters and line cooks. We were all beginning to learn about wine, developing a passion for it, but we didn't have a lot of money to spend on the stuff. 'inoteca was not only our bar, our hangout, but it was also our school.

The wine list was presented without explanation or apology. A dense document, only organized by large divisions of Italy's regions ("South and Islands"), offerings were listed curtly: vintage, a fantasy name or appellation, producer, and price. Come to think of it, the food menu was in minimalist Italian as well, as if to say, "You don't know what suppli are? Fuck off."

'inoteca expected you to be able to navigate the byzantine Italian wine world; you should know that Foradori's "Granato" was a teroldego from Trentino Alto-Adige, or that Le Terrazze's "Chaos" was a montepulciano-merlot-syrah blend from Le Marche. Duh.

If you couldn't handle it, virtually everyone on the staff could passionately guide you to The Next Cool Thing, albeit a bit more Comic Book Guy than the Madrigales and Pastuszaks of today.

This encouraged experimentation. This, and the fact that a lot of the wines were under 40 bucks. It was here you had your first taste of the rustic beauty in an bottle of aglianico or gaglioppo. Funky, cider-like, oxidative ribolla gialla was had for a bargain. You could chip in on a Barolo from the '70s, or a blockbuster from Quintarelli. How about a side-by-side tasting of the wines of Valle d'Aosta? Or a vertical of Brunello di Montalcino? You would head home, lips and teeth stained red, drunk, stinking of robiola cheese, a little smarter, and be down roughly 50 bucks.

The next day, at work, at our restaurants, we would share tales of what we had tried and struggle to learn a little bit more about Taurasi or the wines of Sardegna from our worn copies of Vino Italiano.

After my 100th truffled egg toast or so, they offered me the job as the Wine Director. Joe Denton, one of the owners, was a cool guy. He taught me how to rock a Le Tigre zip-up, introduced me to a ton of music, and was great at working the room, popping corks, as they say.

I told him there was no way I could handle the job; I was a novice, at best, and this was one of the craziest wine lists I had ever seen. He made me a deal: He would give me a sort of oral exam in one week's time, and if I passed, the job would be mine. If not, no hard feelings.

I studied as much as I could and met Joe at the restaurant as discussed. It was a brutal exercise: What grapes are allowed into this blend? What are the aging requirements for this DOC versus that one? It went on and on. I think out of 15 questions, I was correct once.

"I still would like to offer you the job," Joe said.

And because I'm psychotic, I took it.

It was the hardest job I have ever had. The fact that I was completely under-qualified didn't help.

It was so, so busy. I would come into work at one or two in the afternoon and get my ass kicked on the floor for 12 hours straight. We'd be on a two hour wait at 5:30 p.m. and I'd be on my fifth espresso. I would close the restaurant and clear everyone out by 4 a.m., finish my paperwork by 4:30 a.m., 5 a.m., and make my way through the sunrise over the war zone that was an early Sunday morning on Rivington Street. Humid, sticky, overflowed-trash can summer mornings were particularly rough. 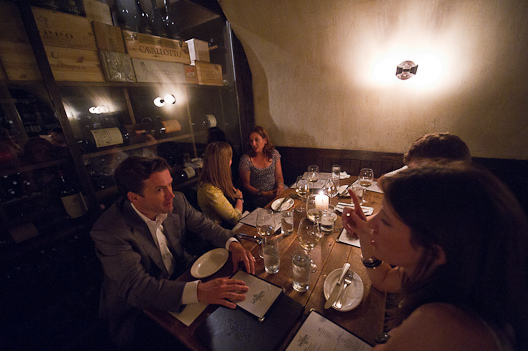 We had no business having a wine list of that size with the cellar and the available space we had. Wine was everywhere, in any nook we could find. Cases of Jeroboams and rarities were stacked floor to ceiling, and guests would only order the wines that lay at the bottom. Refrigerators of varying sizes and efficiency overflowed with Franciacorta and Lambrusco. One night, an avalanche of La Spinetta Barbaresco rained down upon my head and smashed my eye socket.

I did a terrible job at organizing the wines. Ordering, storing, and selling them was a Sisyphean task.

Sidebar: David Lee Roth (yes, that one) lived upstairs; he was a paramedic (yes) at the time. He would come by for a triple-espresso at the start of his shift, and would swing by to hang out on his way home. We would drink wine and I would make him sandwiches after the kitchen had closed. He would tell me stories from the ambulance ("A kid in Harlem drank Drain-o, man!"), talk to me about music ("If you don't think the West Side Story soundtrack rocks, you're not really listening to it, man!"), and talk shit about Eddie Van Halen ("He didn't know how to talk to a woman 'til he met me, man!"). It was awesome.

The problem: I was still learning, and being in charge of a program as prestigious as this, people did not expect this to be the case. This was the place where chefs and restaurateurs ate and drank after work. This was where people taking their master sommelier exam studied. I had David Lynch and Joe Bastianich asking me questions about my wines—-I was using their book to look up the answers! I was struggling to remember what role molinara played in juxtaposition to rondinella and these guys and their brethren were hardcore.

I was a fraud. A fake. I fudged my way through as long as I could. 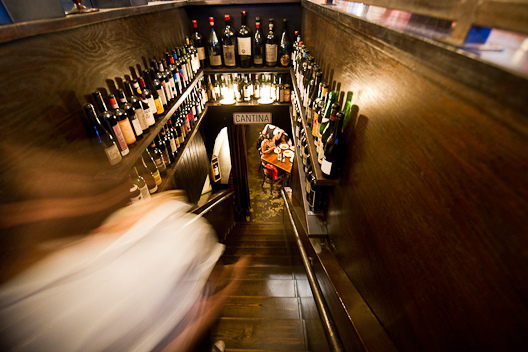 But you know what? I got tough. I learned about wine the way Navy Seals learn how to take over a beach. I was empowered to buy what I wanted, run the program the way I wanted. I was entrusted to run a lot of the aspects of a business. My time there was invaluable and I am extraordinarily thankful for it.

I would argue that the entirety of the world of wine and wine bars owes a lot to the Denton Brothers and their two little cafes. They were life-changing for me, and I can't imagine that I'm the only one. Tonight, their closing night, I will be there, crushing a few bottles of Emidio Pepe and paying my respects.

Thank God I can make a (halfway) decent truffled egg toast at home.

Stay tuned for more reflections on 'inoteca tomorrow.
· All Coverage of 'inoteca [~ENY~]