As noted yesterday, Times critic Pete Wells gives a third star to Annisa this week. He loves the "free-form creativity" of chef Anita Lo's cuisine: "What is remarkable about her food...is not exactly the absence of borders but the ease with which she crosses them. Take the stunner of a Spanish mackerel dish that I ate there a few months ago. After marinating in sweetened soy sauce, the fish is blistered under a hot salamander, flesh side down, until the skin is crunchy with a bittersweet char. This is not far off from the way a Japanese cook may handle mackerel, but Ms. Lo's passport will be stamped a few more times before she's done." [NYT]

Joshua David Stein writes his review of M. Wells Steakhouse as an open letter from chef Hugue Dufour: "My steaks would be exceptionally mediocre. Served plain, they'd be flaccid, greasy and inordinately expensive. Sure, you could get the M. Wells mustard to give it flavor, but that would cost an additional $5. Otherwise, it'll just be a chewy meat slog. And don't forget a crappy caviar sandwich that's crappy because, well, if you're idiotic enough to pay $49.99 for it, you deserve to be disappointed." [The Observer]

New York's Adam Platt gives two stars to Dover: "On my first visit, there were thimblefuls of vegetable-root purée to start, followed by a helping of marble-size gougères that tasted like they'd been beamed in from the kitchen of one of the last gougère-centric cafés in Paris. These were followed by a caviar 'pie' over crushed eggs, which was almost worth its $35 price tag, presented with toast points and warm buckwheat blinis folded in a linen napkin."[GS/NYM] 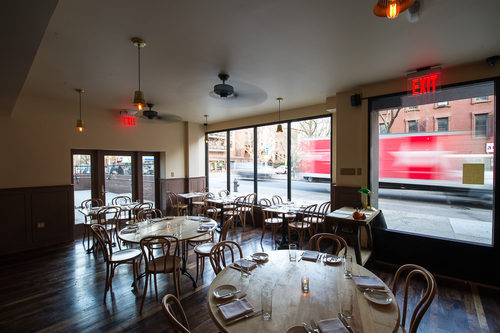 [Dover by Krieger]
Daniel S. Meyer also reviews Dover, giving it four stars out of five: "Small, crisp cauliflower florets ($12) swerve salty in a dressing of colatura (Italian anchovy sauce), but are straightened sweet by plump raisins and chopped hazelnuts. Lusty grilled lamb ribs ($28) and tender slips of eggplant get a briny slap from Thai fish sauce, but are soothed by a blanket of fried garlic, crushed peanuts and fresh herbs." [TONY] 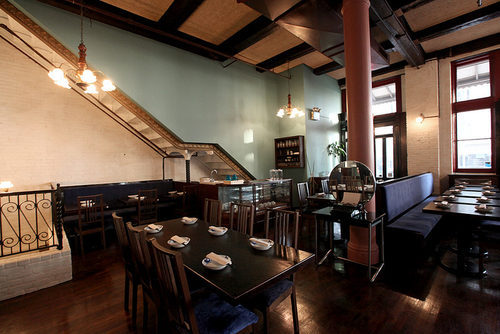 [China Blue by Bess Adler]
Michael Kaminer suggests skipping Tribeca newcomer China Blue: "We expected more from Yiming Wang and Xian Zhang, who own the Murray Hill restaurant Café China. We pondered the shock of aqua-blue walls with dangling, exposed wires as we dug for meat in a cold, gelatinous pile of marinated duck ($12). No luck. All skin and fat, with a taste of plastic, the gray-brown dish remained uneaten. Hot and sour soup ($5) sounded good on a bitingly cold night. Neither hot nor sour, it scores several rungs below the two-buck broth you'd get at any bulletproof Chinese joint. Only shrimp shumai ($10) delivered pleasure." [NYDN] 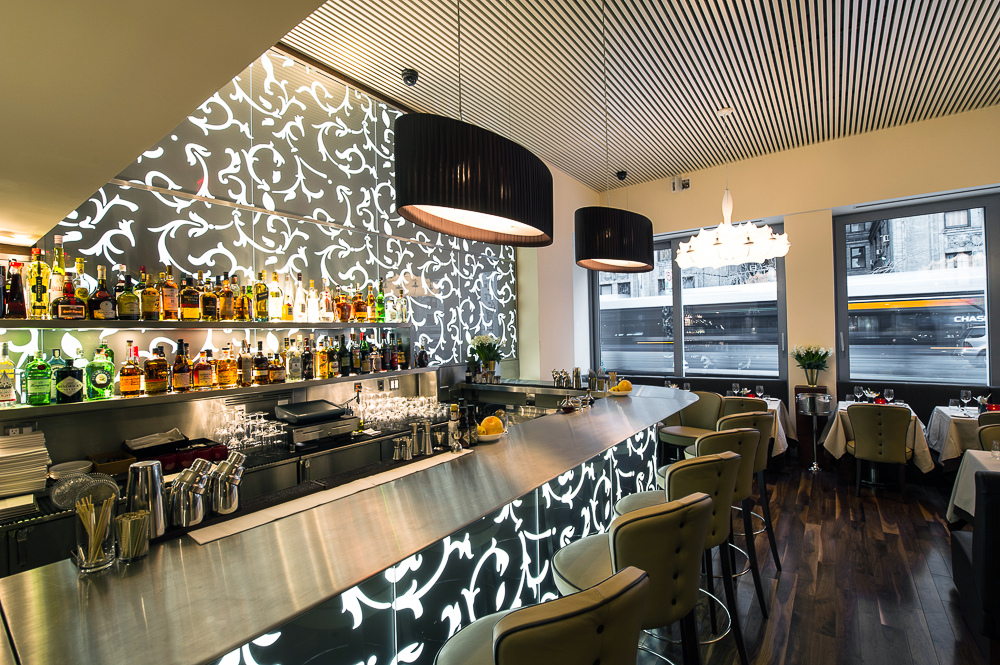 [Daniel Krieger]
THE ELSEWHERE: Gael Greene likes many of the dishes at pricey UES newcomer Ristorante Morini, Amelia Lester of Tables for Two is not a fan of Saul in the Brooklyn Museum, Restaurant Girl has a sensational meal at The Clam in the West Village, and Ligaya Mishan samples five dessert prix fixes around the city. 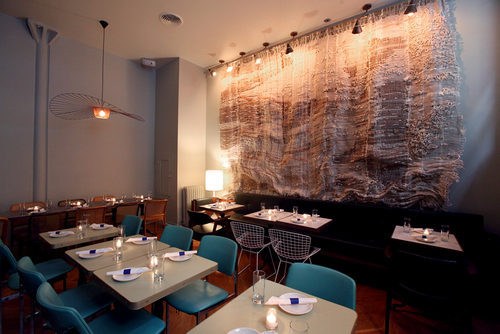