The Fried Watercress With Cashews at Telepan Local

Share All sharing options for: The Fried Watercress With Cashews at Telepan Local 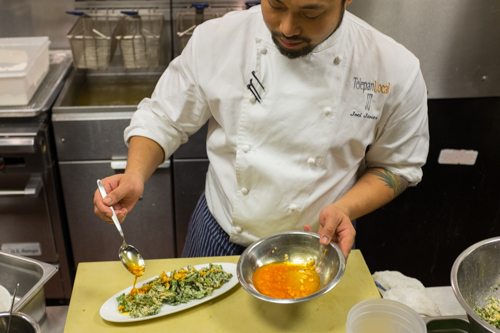 Telepan Local chef de cuisine Joel Javier created the fried watercress with chili oil and cashews as the result of a happy accident. Javier came to Bill Telepan's eponymous restaurant as a sous chef around six years ago with prior experience at Bouley and Aquavit already under his belt. Last year Javier took a sabbatical to Europe where he staged at St. John restaurant in London, at Sergi Arola Gastro in Madrid and, inspired by Telepan's long term commitment to the greenmarket movement, served as a chef volunteer for World-Wide Opportunities on Organic Farms. He became the chef de cuisine at Telepan Local upon returning from Europe, although the dish preceded his initial departure.

The dish came to be because of a shipping error. The kitchen at Telepan ended up with several boxes of watercress too many one weekend. Javier started playing around with it and eventually concocted the dish that would find its way on to the opening menu at Telepan Local. He admits that it "sucked" the first time he tried it, but after experimenting with it for a bit, he perfected the technique for frying the watercress without it becoming lumpy and soggy. He paired it with a chili oil vinaigrette spiked with paprika and cayenne pepper and added toasted cashews to complete the dish.

Here is a look at how Javier fries watercress.

· All Coverage of Telepan Local [~ENY~]