Share All sharing options for: A First Enthusiastic Look at Tehuitzingo Taqueria

While the food of Manhattan is justly celebrated, it must bow to the "Outer Boroughs" where many dining categories are concerned. In particular, the finger-shaped dominant island lacks in its trendier and more expensive neighborhoods the kind of working class taquerias — many evolved from bodegas — that are readily found in every other borough. Which is why the new Taqueria Tehuitzingo is destined to be a dining asset.

Located behind and just north of the Port Authority on a stretch of Ninth Avenue that's turning into one of the city's best cheap-dining destination, the trim little place with its bright signage evolved from a bodega on 10th Avenue and 48th Street long famous for its tacos. The old place is now closed, though the Pueblan hipster at the counter assured me it would reopen after a renovation. Behind him labored the sainted crew of ladies who made the antojitos in the old place. Give them a wave. One of the best aspects of the new Tehuitzingo, aside from comfort the previous incarnation lacked, is: Open 24 hours! Imagine stopping by after a show at Terminal 5, or a tedious bus ride from Tenafly, Nutley, or Ho-Ho-Kus, New Jersey. 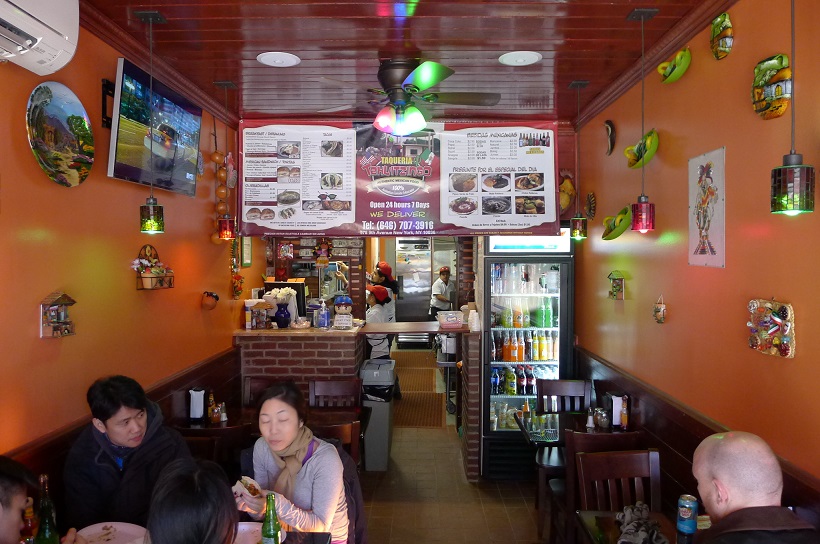 [Dining room]
The new all-night taqueria is named after an isolated municipality in the arid and mountainous southern reaches of the state of Puebla, near the source of the Tecolutla River, which winds through the town. The food of the taqueira reflects the cuisine of the region, including meal-size soups; meats, poultry, or enchiladas drenched in moles; Mexican sandwiches; tacos, chalupas, and tostadas; and hand-patted masa specialties such as huaraches and quesadillas (the latter stuffed with squash flowers or huitlacoche). Also offered are the sorts of Tex-Mex and Cal-Mex dishes that Pueblans have embraced since arriving here, partly because they know gringos love 'em: burritos, fajitas, and nachos included. Twisted in Southern Mexican directions, of course. 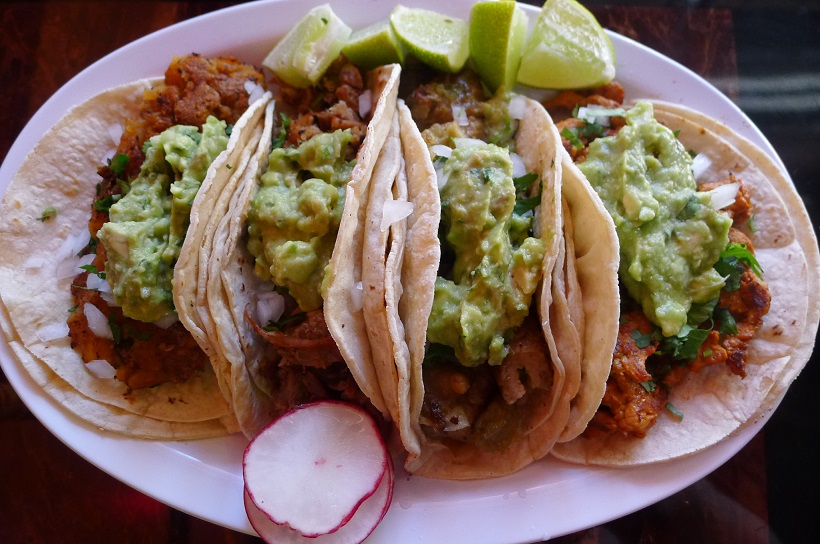 [Tacos]
First the tacos. The menu offers a whopping 17 fillings, running from the usual pollo (chicken), bifstek (beefsteak), carnitas (fried pork tidbit), and carne enchilada (chile-stewed pork) to offal like lengua (beef tongue), oreja (pig ears), and cabeza (assorted beef face meat). For $3 each, the tacos, made in the traditional way with two soft-corn tortillas and topped with chopped onions and cilantro, arrive overstuffed. While early Pueblan tacos in town offered the option of a thin and trickly guacamole sauce squirted from a plastic bottle, Taqueria Tehuitzingo loads its tacos up with a giant gob of thick dipping guacamole as an added bonus at no extra charge. 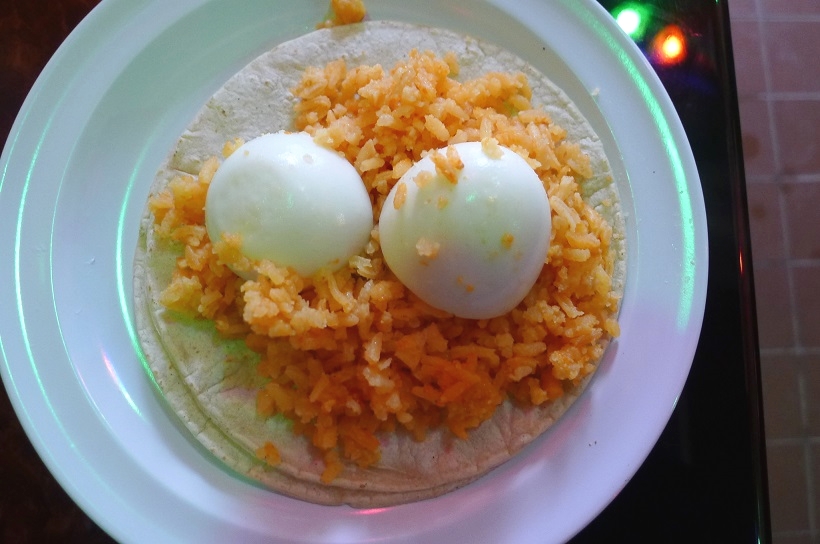 [Tacos placeros]
There is even one selection from the tacos placeros ("market tacos") canon, which only recently appeared in town. It's made with orange-tinted rice and a boiled egg, and is of interest only for ethnographic purposes, unless you really load it down with salsa — or use it as an unusual breakfast. 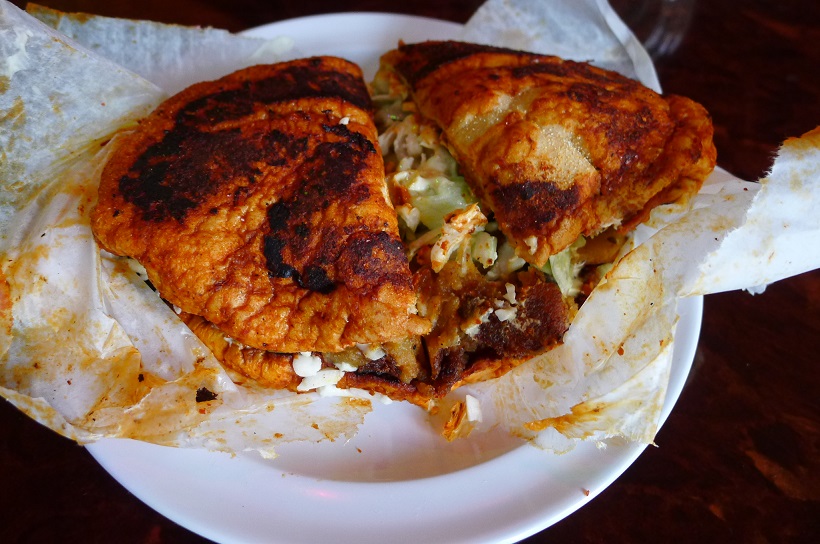 [Pambazo]
Another oddity, among a lush collection of tortas and cemitas (Mexican sandwiches), is the pambazo, a French roll dipped in red guajillo chile sauce and piled with potatoes, chorizo, and string cheese. 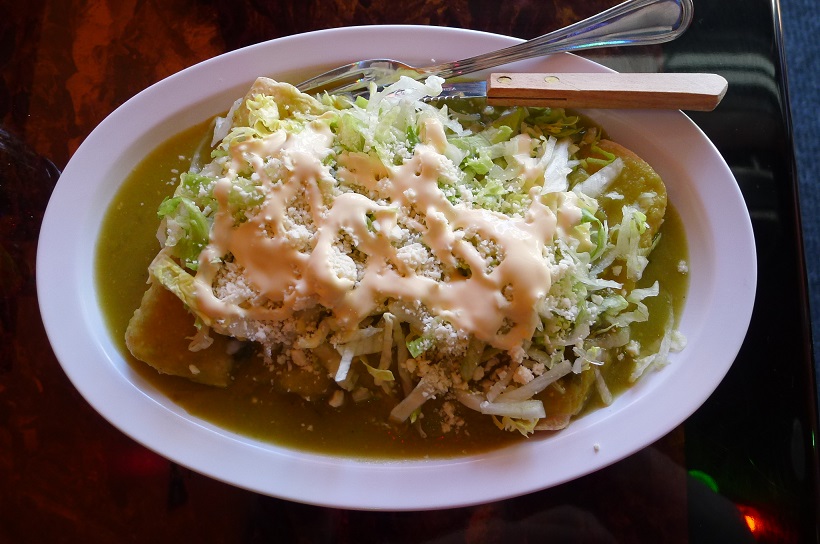 [Enchiladas]
Enchiladas ($8) come generously furnished with a choice of fillings, four to a plate, the enchiladas themselves completely eclipsed by a haystack of lettuce and squiggles of crema. The weekend pork soup pozole is available anytime; rather than being accompanied by a couple of deep-fried tortillas, it comes with a pair of fully turned-out tostadas, making what amounts to two meals. But the flavor of the pozole is a little half-hearted, even when you add the lime, onion, cilantro, oregano, and ground chiles; instead go for chilate de pollo ($9), the ultimate winter soup, fiery and filled with fresh vegetables. 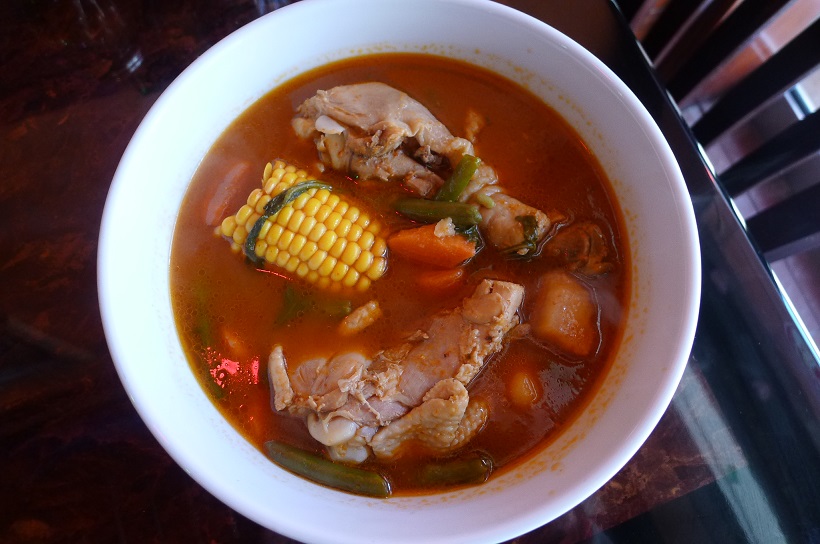 [Chilate de pollo]
I'm still waiting for my bowl of guasmole de res, a thick beef soup featuring guaje seeds — which come from the red or green elongated pods you often see for sale in the produce section of Mexican bodegas. I've asked for it on two visits, and so far, no dice. I can't wait to try it.

· All Posts by Robert Sietsema [~ENY~]