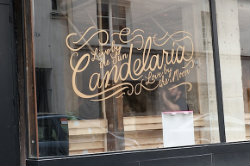 1) Tacos in Paris:
Jessie Kiefer and Sari Kaimn of The Morning After interview Experimental Cocktail Club veteran Joshua Fontaine, an American restauranteur in Paris known for opening Paris' first Mexican taqueria. Tune in to hear how, after having lived in New York for a decade, the NYU-alum Fontaine saw a need in the Parisian food scene:

Serving soft corn tortilla, very homemade, very authentic in terms of spice level, people were a little bit shocked by that I think, but that's the sort of thing that sets you a part. We weren't trying to cater to a specific French palate or whatever the idea of a French palate may be. 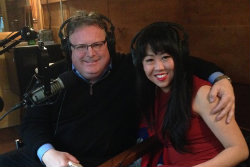 2) David Burke Sneaking onto a Flight:
Leiti Hsu of Word of Mouth sat down with Chef David Burke, who shares with her a story about traveling to Toronto with Drew Nieporent, back when Burke was the chef at The River Cafe:

I didn't bring a passport, and I didn't know what to do…This was the first day that the Florence Fabricant article came out for The River Cafe, so my picture's on the cover of the dining section, so we use that, the guy lets me use that as my passport. 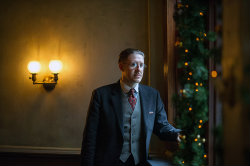 People think that Brooklyn's cheap and Brooklyn's the place to be, but Brooklyn's changed dramatically, especially Williamsburg in particular, it's more expensive for residential and for commercial spaces right now than most parts of the city…from a business perspective, we've learned a lot about the demographics of how business works, and they're demanding these rents, but the check average in Brooklyn is very different than the city…and I love Brooklyn, I love the people of Brooklyn, I'm a resident of Brooklyn, but they don't spend nearly as much money as the people in the city that are making several hundred thousand dollars a year or that have expense accounts or company dinners. 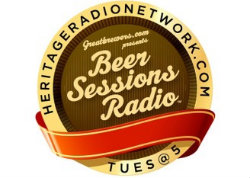 4) The New York State of Beer:
Jimmy Carbone, all-around NYC beer diplomat and owner of Jimmy's No. 43, hosts a plethora of sources related to all facets of local beer, including a Cornell University hops expert, the Deputy Secretary of New York State, the Executive Director of the New York State Brewers Association. Sam Filler, the Cuomo-anointed "Beer Czar of New York" serves as a point man for brewers and growers seeking answers in government. Here's Filler on the benefits of the new Farm Brewery License:

Farmers have to feel comfortable growing these grains. A lot of these farmers are growing soybeans or corn, but we have to provide a market for them so they feel secure growing these products. 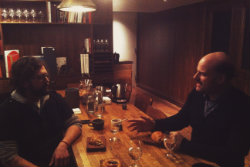 5) Sourcing in NYC vs. The Northwest:
Mitchell Davis, host of Taste Matters, paid a visit to Atera to ask Matthew Lightner about longer tasting menus, how Basque cooking influences his work, and how the higher price margins and culture of NYC dining affects sourcing Atera:

New York chefs are very lucky because you have such a market here that you're able to get amazing product that it was even tough to get if you were in Oregon. Yeah, you have one or two farmers that come by bring this stuff to you, and trying to work with them is very good, but in New York City there's such a demand for it that all these farmers want to send their best product here and chefs are able to pay for better delivery, they're able to get it more times a week, and be able to charge more on the menu for it.