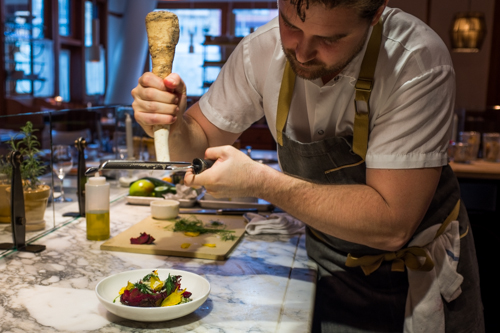 "If you told me five years ago that I would be cooking this way, I would not have believed you," says chef John Fraser. He is referring to the low and slow cooking technique he is using at Narcissa, rather than the à la minute style he was trained in. After using Bonnet and Rotisol rotisserie ovens years ago, the chef was inspired to draft a menu specifically centered around low and slow cooking, even though he didn't have any concrete plans for a new restaurant at the time. The partnership with Andre Balazs in The Standard Hotel proved to be the perfect opportunity, and Fraser installed two rotisseries in Narcissa and proceeded to cook every imaginable vegetable in them. He was particularly happy with the way the beets came out and added them to the menu. It has become the most popular appetizer, selling an average of 40 portions per night.

The beets are slow-roasted for up to five hours. Rather than being completely soft like a cooked beet, or firm like a pickled one, the rotisserie allows Fraser to develop a distinct textural contrast between the dense crust and pulpy interior in his beets. This gives the vegetables added dimension and is somewhat evocative of the contrasts that exist in roasted meats. The use of horseradish in the dish, a popular addition to roast beef, is further evocative of this, although Fraser adds pickled cucumbers, slivers of golden baby beets, and sprigs of dill to brighten the palate.

Here's a look at how Fraser cooks his beets:

Editor markup for Narcissa . This is only visible in the story editor.

· All Coverage of Narcissa [~ENY~]