John Fraser on the Opening of Narcissa in the East Village

Share All sharing options for: John Fraser on the Opening of Narcissa in the East Village

Six years after the opening of his Upper West Side fine dining restaurant Dovetail, John Fraser is now serving a breezy version of California cuisine at Narcissa in The Standard East Village. Eater recently chatted with Fraser about his partnership with hotelier Andre Balazs, the demise of his previous downtown project What Happens When, and his goals for Narcissa.

Do you see Narcissa as a casual counterpart to Dovetail?
John Fraser: I can't deny where I've come from and I can't deny the importance of Dovetail in my life/growth/career, but it is something different. By virtue of where it is, and by virtue of the farm and its influence on our cooking. Dovetail is six years old, and I've grown up quite a bit and grown as a creative person quite a bit, and this is an expression of where I am today.

What's different about this restaurant?
We are applying the same philosophies of caring about ingredients and sourcing responsibly, but we're taking that to a different scale. It obviously has more seats and a different clientele and style of service, but it doesn't mean we care less just because the volume is slightly higher and the style of service is different.

Were you proud of What Happens When?

But did you feel like you were just getting it going?
Well, I feel like I had a lot of good ideas that I wasn't able to get out. It doesn't mean that they weren't good...they just didn't get to be expressed. I loved the collaboration. It was the first time that me and a designer really got together and worked, as opposed to asking a designer to design something. So I really got my first taste of being involved in the whole process. I did the same thing at Dovetail, but I wasn't as mature at the time. I sort of loved the whimsicality of it all. Restaurants can be very arduous and you think this machine is never going to stop. The idea of What Happens When is that we could take chances that you could never take at a restaurant, because it didn't matter — it was always going to close. It just closed a little bit early, which is fine. 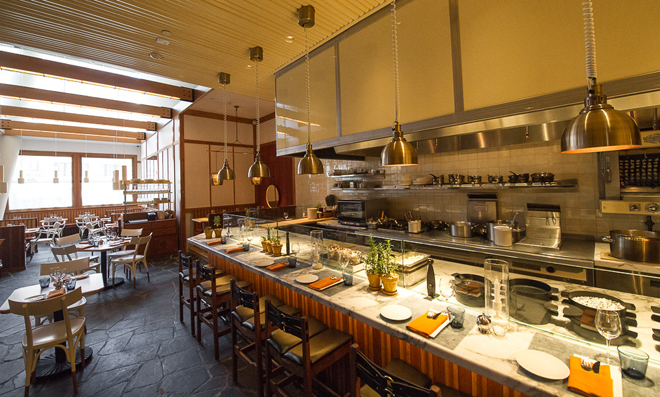 Is there anything that you've brought with you from that restaurant to this restaurant?
I think that restaurant changed my attitude and it caused me to be a lot riskier, and not only with the way I cooked. It changed the way that I cooked at Dovetail, as well, but also just my attitude towards things. At Dovetail we cook behind a wall, and at What Happens When there was a window, and being able to sit there and watch people eat your food, you can learn a lot.

What is your collaboration like with Andre Balazs? How did this come together?
Well it's been about two years. We met each other about two years ago, and at that point there was a lot of conversation. It's a relationship like anything else — there's the finding out about each other and the making love. We've gone through that whole process. It's been very rewarding. Our relationship is fantastic. I've never met anyone who is so keen on giving people the tools they need to succeed while always caring about the guest's interaction. I think that most people are an "either/or" and he's an "and." He's given me everything I need to be successful here, and as a partnership, it's been fantastic.

There is something archaic and exciting about going back to cooking on fire and about sort of "slow and low."

Was the rotisserie always part of the plan?
Yeah, from two years ago. I was designing a menu for a rotisserie and I just didn't know where that was going to be. Obviously that menu is not even close to where we are today with this menu. There is something archaic and exciting about going back to cooking on fire and about sort of "slow and low." There is a lot of care and you know it took a long time — it's not like Chinese food where it goes in a hot pan and comes to your table. There's something fun about that as well, but there's something about this where there's a lot of love taken and a lot of expertise.

The rotisserie vegetable dishes are generating a lot of buzz. But how, specifically, do you cook vegetables on a rotisserie?
There are a few different ways. One way is in a tray. The potatoes, for instance, are receiving warmth from whatever is cooking on the spit and the drippings, the fat. Another way is to actually spit the vegetable. In that way, you're sort of treating it like it's a piece of meat. And the third is in a basket, and that basket is very much like a spit, except the vegetables are next to one other as opposed to on top of each other, and they receive a different kind of heat.

How does slow and low cooking change the flavor and the texture of the vegetables?
So, if you can equate a beet to a piece of beef. We leave the beet skin on so there's this dry crusty outside and a very, for lack of a better word, meaty interior. The mistake with a lot of vegetable cooking is that it's all one dimensional. It's all soft or all crispy. Because we're cooking it slowly you get the juxtaposition of the outside being this crispy exterior with an exciting crunch, and the inside being this crave-able sort of sensory meat. 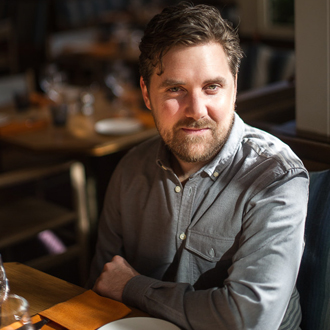 When are you going to start lunch?
I think in the next three to four months, we'll definitely go into lunch and brunch. Breakfast is still in the air depending on the demand of the neighborhood. Our list of people we want here, at the top, is neighborhood people. If we can be that breakfast place for the neighborhood, we're doing something right.

What are you most excited about on the opening menu?
I'll say three things. The first is the rotisserie beets — they're exciting to me. I've never eaten anything like it, so the new-ness of it is exciting but they're also just really crave-able. The carrot fries are really great. They're somewhere in between a carrot corn dog and a carrot tempura, and it's vegan, which is exciting. Another one is the barley risotto. So we're cooking barley risotto-style and finishing it very much like [spaghetti alle] vongole. I think when you think of typical New York City dishes, [spaghetti alle] vongole is one of them, and to try and play with people's perception of what that could be, that's exciting.

Right now, in the dead of winter, what role does Andre's farm play? Are you getting herbs? Are you getting vegetables?
We just received 300 pounds of butternut squash, which was the last of the butternut squash for this year, so we're trying to figure out how to use 300 pounds of squash. It's one of the fun challenges of this project. The farm is a blessing and a curse sometimes. You know, it's feast or famine. Sometimes it's, "Here comes 500 pounds, get ready." And then at times, I wish we had more. That's how farming works. It's dirty. It's not clean at all.

To answer your question, we've got lettuces coming in, little gem, eggs — all of our farm egg dishes are eggs from the farm — and about 500 pounds of butternut squash that I have to figure out what to do with. Oh, and beets. We just got a bunch of beets in. It's going to start to get a little slow. We just put the seed order in for next year, so right at spring, we'll have a lot more. In between now and then. it's mostly greenhouse lettuces, herbs, flowers, and stuff like that, and eggs.

· All Coverage of Narcissa [~ENY~]