A Plywood Tour of the Bowery's Big Deal 2014 Openings

Share All sharing options for: A Plywood Tour of the Bowery's Big Deal 2014 Openings

Work is now being done on four major restaurants along the Bowery, all of which are slated to open later this year. Here's a look at the current state of Cherche Midi, Keith McNally's new French restaurant in the space that housed his short-lived trattoria Pulino's. The windows are papered over, and one doorway has a plywood shield. Knowing McNally, the facade of the restaurant will soon be protected by an impenetrable, two-story plywood wall, with a guard to shoo away food bloggers.

The kitchen at this new McNally restaurant will be helmed by Shane McBride (currently executive chef of Balthazar) and Daniel Parilla (currently head sous chef of Minetta Tavern). In an interview from 2011, McNally talked about wanting to open smaller restaurants in New York. "Smaller somehow is better," he said. So, perhaps he will create a more intimate experience at this new restaurant. Only time will tell.

One block north, the former Veselka Bowery space has some paper in the windows. This will soon become a new steakhouse from Lure Fishbar's John McDonald and Josh Capon, and Stanton Social restaurateur Peter Kane. They have yet to announce a name or chef for this project. The team is working with Meyer Davis Studio, the company that created the interiors for El Toro Blanco and both Lure restaurants, so expect something very different from the dreary Veselka Bowery space.

Across the street, in the awkward alleyway known as Extra Place, sits the future home of Momofuku Ko, which also has paper in the windows. The Ko Team has not announced a closing date for the original First Avenue location yet, but the move will probably take place under the cloak of night, when you least expect it. Ko 2.0 will have four tables with four seats each, plus a counter with 25 stools. Here's a very rough sketch of Ko 2.0 from David Chang's Instagram:

Before the move was announced, Eater sources whispered that David Chang wanted to find a location for Ko that would make it more of a destination restaurant, perhaps something that could compete with the multiple Michelin star recipients and establishments at the top of the S. Pellegrino list. It will be interesting to see how this one takes shape. 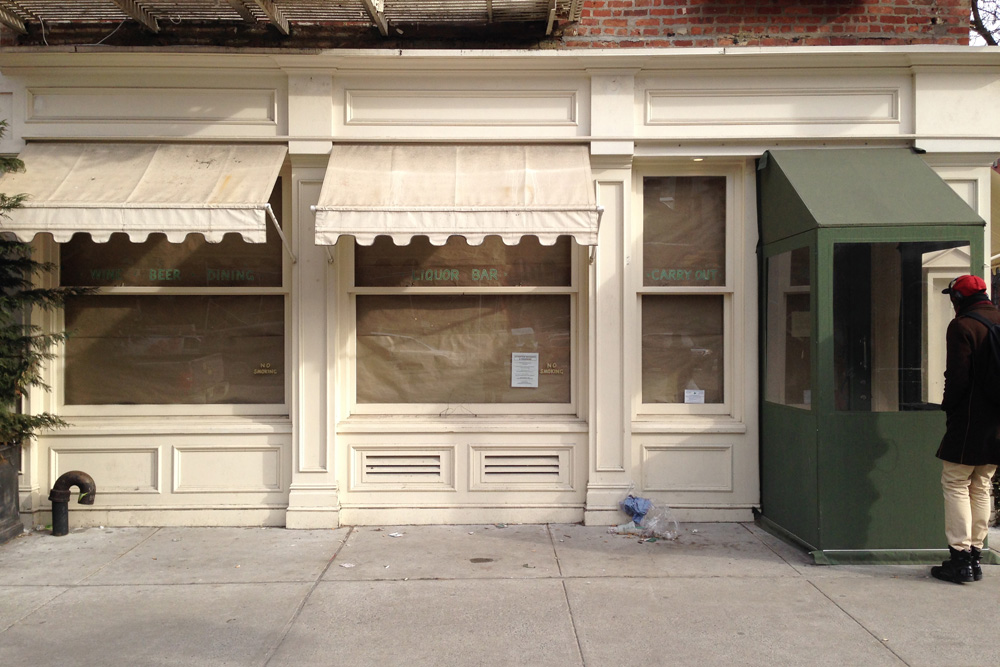 Around the corner and up the block sits the old Peels space, now on its way to becoming Bar Primi. The new restaurant from Andrew Carmellini, Josh Pickard, and Luke Ostrom is being pitched as a "casual pasta shop." At this week's CB3 meeting, the team explained that the layout of the space won't change that much. Taavo Somer, the designer/restaurateur behind Peels, is working on the revamp. It sounds like the Lafayette crew wants to get this one open in time for summer.
· All Plywood Coverage [~ENY~]