Dead tired of winter? The best antidote I've stumbled across is the hot pot. This thousand-year-old method of cooking, native to northern China and Mongolia, but also enjoyed throughout the rest of China and Southeast Asia, involves diners dipping raw ingredients into a bubbling communal pot and then eating them, as fragrant steam shoots upward. While hot pot spots have been prevalent in Flushing and Elmhurst for 15 years, a new one — a branch of a Mongolian chain with 600 locations worldwide — has revolutionized the genre here. It may finally succeed in fully popularizing this do-it-yourself dining activity. 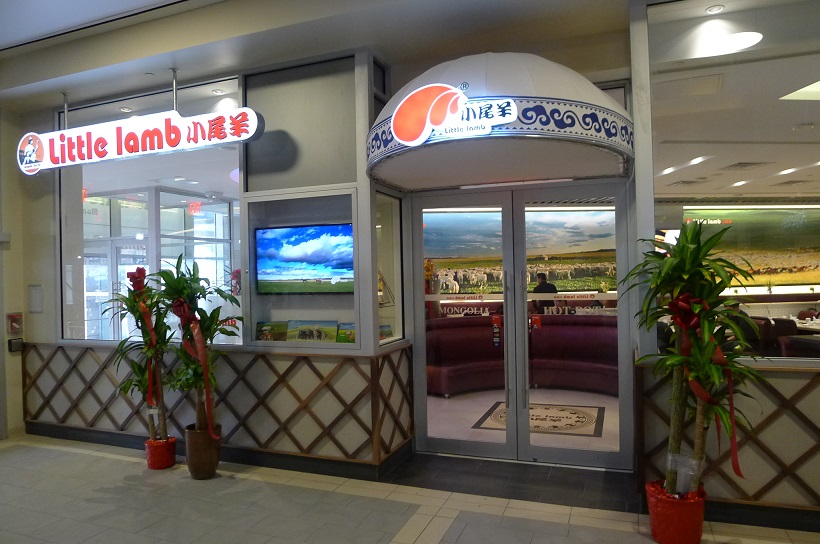 Little Lamb (not to be confused with the decade-old Happy Family Little Lamb on Main Street) is located in the Shops at SkyView Center, perched on the banks of the Flushing River and anchored by Bed, Bath & Beyond, Target, and BJ's. The mall has a half-finished quality to it at the moment, and the other food offerings are not auspicious: among them Chuck E. Cheese's, Subway, and Applebee's. In fact, in stark contrast to the other downtown Flushing malls, most of the tenants at SkyView are not Asian. Little Lamb is the second American branch of the chain. Boston got the first. 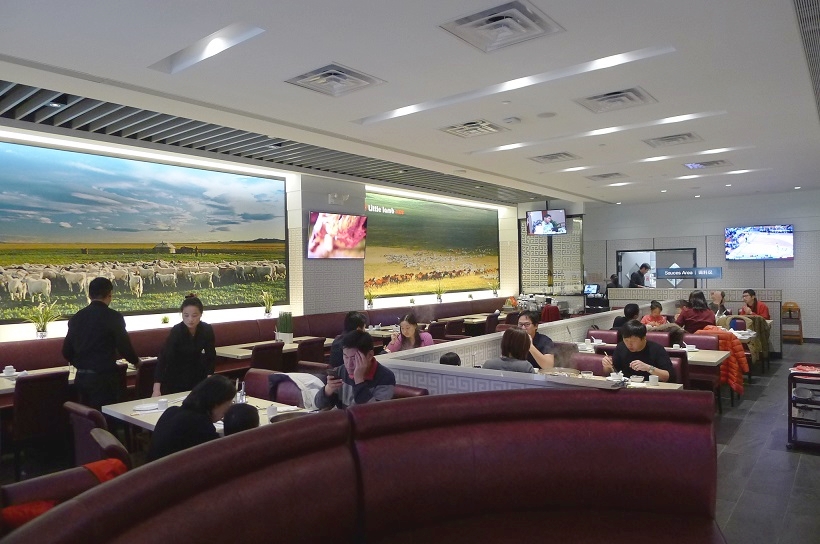 Little Lamb is strikingly modern in its interior design, featuring giant back-lit murals of stampeding horses and sheep herds with yurts on sunlit Mongolian plains. While you can indulge a taste for sheep at this new restaurant, there appears to be no horse on the menu. There are three rows of tables flanked by plush red chairs, and a line of private rooms along one wall that can accommodate a dozen or more at one time. The entire restaurant seats 136. The tables are outfitted with induction burners that serve to minimize ambient heat, and cooking is done by you at your table in a wok with large handles. The wok can be subdivided with a curving barrier, making it look like a yin-yang and allowing you to pick two types of broth from a roster of four. 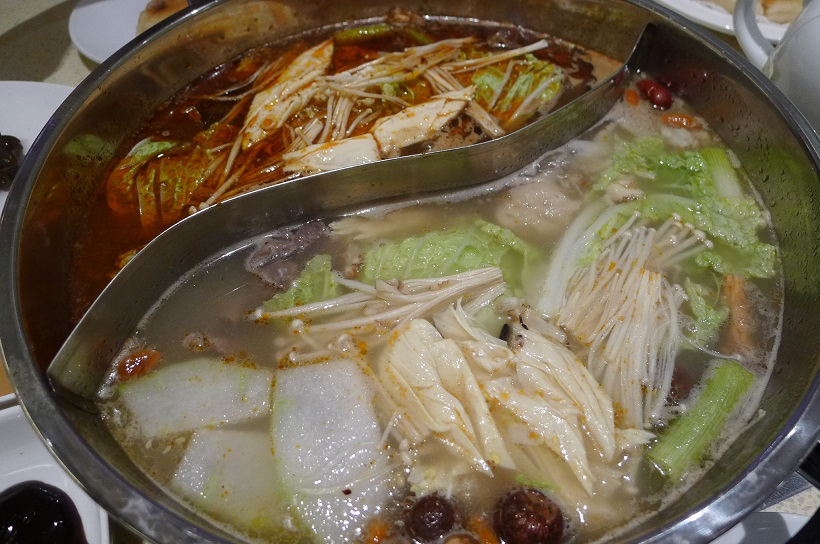 One of those broths, known as "Ma La," is red and hot as the devil; the other that a friend and I tried on a recent afternoon, "House Original Pot," is white, salty, and aromatic with spices and red dates. Both broths contained such a welter of flavorings, it was hard to distinguish individual seasonings. The point of the twin broths is that diners who love spiciness can happily co-exist at the same table with those who don't. Once seated, you'll be presented with a check-off menu of things to cook in the pot. Don't let the number of choices flummox you. (The selection, for example, includes eight types of mushrooms and 19 items in the Fish Balls category, for a total of 106 choices.) 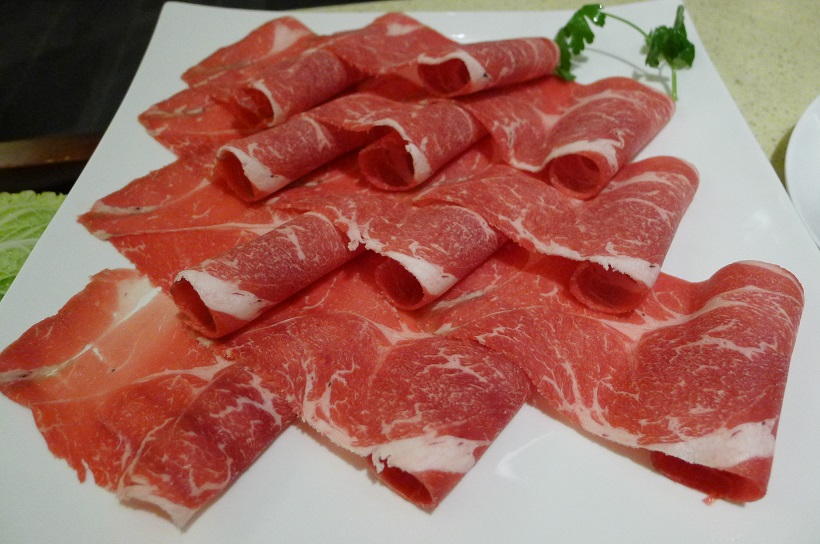 [The Grade-A Lamb]
There are really no mistakes to be made. As I looked at the tables of eager diners around us, the guys seemed to be preferring the meat — which comes thin-sliced and frozen, of obvious freshness — while the gals loaded up on veggies. My friend and I picked Supreme Grade-A Lamb, Premium Fatty Beef, Fish Meatballs (fish balls stuffed with pork, Fujianese-style), Enoki Mushrooms, Black Wood-Ear Fungus, Wide Potato Noodles (sweet potatoes, that is), Napa Cabbage, Winter Melon, Tofu Skin, and Quail Eggs. 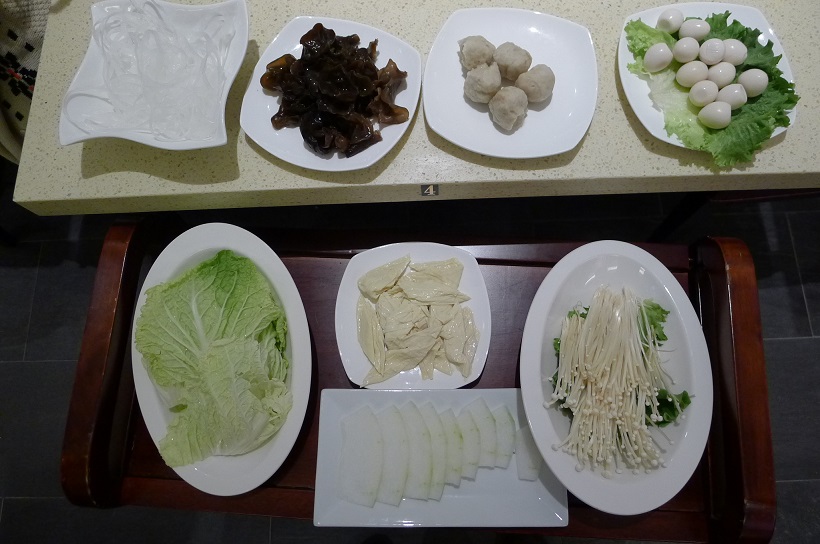 For things already cooked, or things that cook more readily — sliced beef, shrimp, Napa cabbage, and bean curd skin — you may simply want to swish and eat. Other items require much longer cooking. You can dump masses of raw materials into the pot at once, and keep pushing the items to the side, while new ingredients are added to the less-populated part of the broth. Think of the process as a cooking game. Take turns dominating the wok. And let everyone have a hand in the ingredient selection. 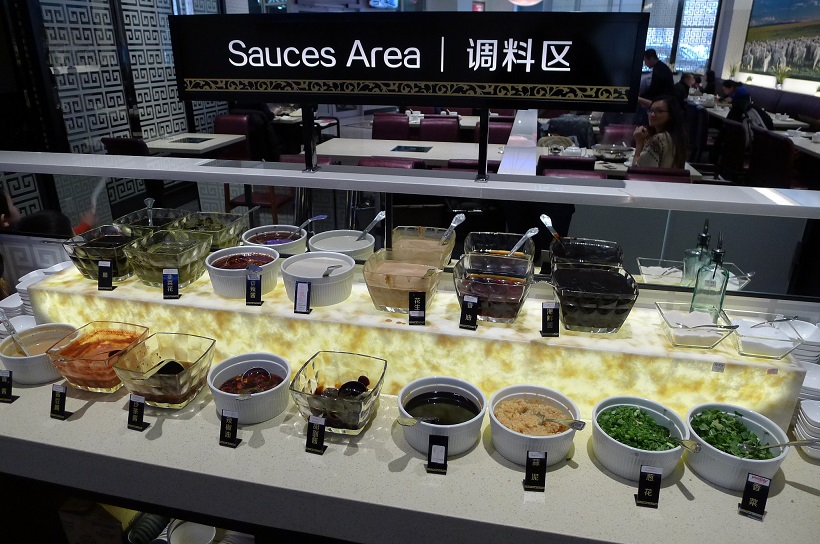 I've eaten in many hot pot places before, mainly in Flushing, and Little Lamb outstrips them all in meat quality, range of selection, and functionality of the design. A bay at the end of the tables offers two dozen dipping sauces, which range from toasted tahini to chile oil to hoisin to various types of vinegar. You can take as many sauces as you like back to your table, and use them at your discretion. I found the cooked items plenty flavorful without the dipping sauces.

Don't neglect the already-cooked menu items that don't go into the pot. The Mongolian lamb pies were ethereal, and the scallion pancake different from any I've tasted before. And an hour or two spent around the hot pot will soothe a head cold and dispel any depressing ideas about the length and severity of the current winter. And I guarantee you'll want to return again.