Jonathan Waxman Looks Back on 10 Years of Barbuto

Share All sharing options for: Jonathan Waxman Looks Back on 10 Years of Barbuto

Welcome to Kitchen Time Machine, a new interview series in which author and Toqueland blogger Andrew Friedman sits down with some of New York's most iconic chefs. Up first: a two-part interview with Jonathan Waxman. 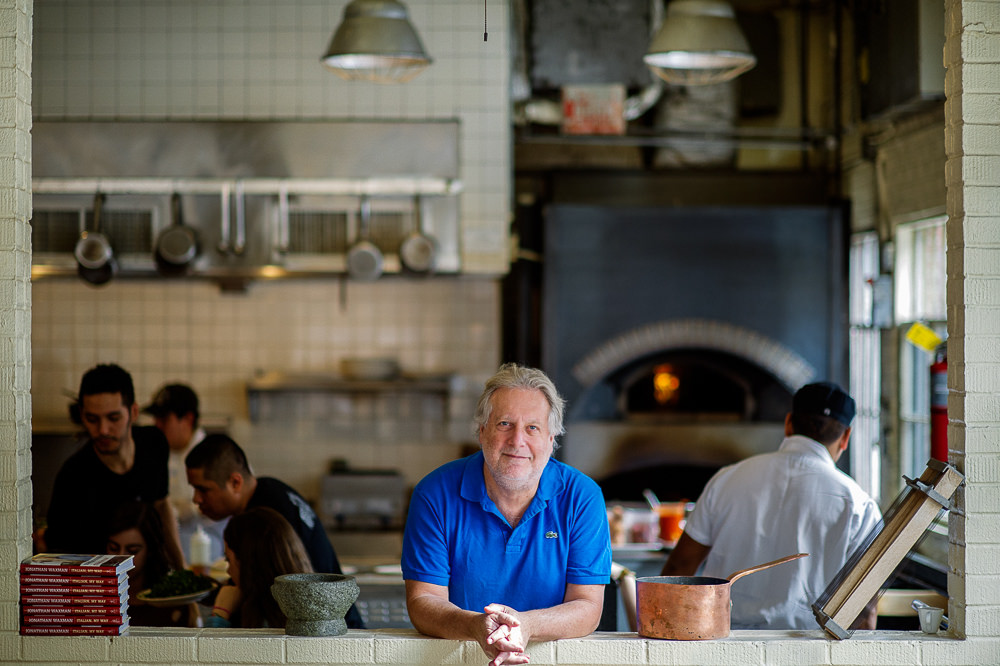 Andrew Friedman: Since this series was occasioned by my forthcoming book on the American chefs of the 70s and 80s, I thought I'd kick things off with the first person I interviewed for that project, Jonathan Waxman. But that's actually just a coincidence. The real reason I'm starting things off with Jonathan is that his West Village restaurant Barbuto turns 10-years old today … offering a perfect moment to check in with this iconic chef. In brief, Waxman, a native of California, cooked at Chez Panisse, rose to prominence at Michael's in Santa Monica in the early 1980s, then came East to open Jams in Manhattan. A series of restaurants on both coasts followed (Table 29, Washington Park, etc.) before he launched Barbuto in 2004.

Andrew Friedman: Happy Anniversary. When I mention that Barbuto's turning 10, what's the first thought that comes to mind?

Jonathan Waxman: Well, years ago I had a restaurant attorney. I was 33 and was about to sign my first restaurant lease. He goes, "Just remember, 10 years goes by in a heartbeat." At age 33, I just laughed. I thought he was crazy. In point of fact, it was sage advice. 10 years does go by, in the restaurant business at least, in a heartbeat. It feels like the years just fly by. Does that mean that I had a great time or I had a bad time or I had a mediocre time? No. What it really means is that for some reason I couldn't slow down the process. It was like a freight train going down the hill with no brakes. That's how it felt.

10 years does go by, in the restaurant business at least, in a heartbeat.

It seems like Barbuto's success was a slow build over time, and that it's more popular and hotter than ever right now.

Yeah. It's funny: Initially when I opened the restaurant, it was [opening chef de cuisine] Lynn McNeely and myself. We had no manager. We had no point-of-sale system. And we opened up the doors five nights a week, no lunches. And I thought we would do at the max a million dollars a year in business, $20,000 a week. Right out of the gate, I got reviewed by everybody. And so after two weeks, I said, "I need a manager." I hired a manager who will remain nameless. It was super, super busy already. And one of my great waiters came to me. He said, "Jonathan, I don't know how to explain this to you. Your new manager is in the bathroom screaming and throwing water on her face." I said, "I guess we're busy, huh?" (laughs) 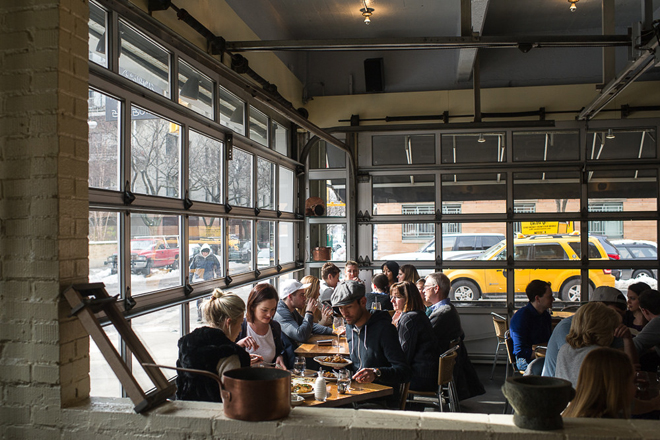 Is that ironic to you? Have you thought about that before?

I think about it all the time. But Ruth Reichl and I were discussing the fact that Barbuto might lose its lease, which could happen. And I said I was kind of worried about it because the neighborhood is changing, real estate's getting very expensive, I don't know if I can afford to be here anymore, which is absolutely true. And she goes, "You know, Jonathan, it's sort of like a Broadway play. Restaurants don't really last forever." The Fantasticks was there for 38 years or whatever it was for, but most restaurants and Broadway plays are kind of the same. If they last a year, they're somewhat in your memory banks. Last two years, they're really in your memory banks. Jersey Boys, I think it's approaching its eighth year. That's kind of a miracle. And restaurants are kind of the same thing.

I think unfortunately chefs are stuck in that sort of funny place where people expect them to evolve along with the tastes of everybody else, or at least stay ahead of the public in terms of innovation. Like whatever I served at Michael's, I'm not really serving today at Barbuto but I really am. It just evolved. Actually, it's kind of devolved a little bit. It's gotten simpler. I said this about Bobby Flay last week … he has gotten better in his career because, it's like musicians, you learn to play less notes, you know?

Take me through the beginnings of this restaurant. It was a headscratcher at the time that you took on Italian food.

I initially didn't want to do this restaurant. I was kind of talked into it by my partner, Fabrizio Ferri, who was my neighbor on the Upper West Side. And I remember walking by and looking at this place with Jimmy Bradley and Jimmy goes, "This place sucks. You'll never do any business." It was called Braques. It was open during the summertime but mainly they used it as a commissary for Industria. And so Jimmy said no. And I take Jimmy's advice very strongly. And I kept saying, "No, no, no." The strongest word in the English language is no. And Fabrizio kept pestering me. And finally, I just said, "Fuck it. I'll just do it."

And when we were talking about concepts, he'd say, "You're going to be an Italian restaurant, right?" I said, "No, I do 'California cuisine,' whatever that means." He said, "No, no. You cook like my Roman grandmother. You cook simply from your heart." I said, "Well, that's still not Italian food." He goes, "But you don't get it. You do cook Italian food." So he cajoled me to do the restaurant and then he cajoled me into doing an Italian restaurant. 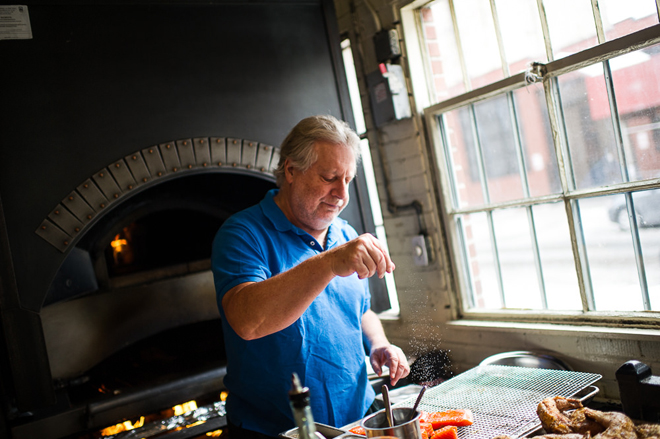 But isn't "California cuisine" (whatever that means, as you say) closely tied to the Italian sensibility or the Mediterranean sensibility? Aren't there a lot of fundamental similarities?

You know, I remember when Michael's first opened in Santa Monica, and I said, "I'm going to do pasta." They all laughed. Everybody laughed at me. And it took me a year to learn how to do pasta. And Mauro Vincenti taught me a little bit of stuff, taught me how to make cacio e pepe and things like that. And Piero Selvaggio at Valentino. And then my trips to Italy, you know, searching things out. And it was that sort of magical moment. I remember, going to Alice Waters' 50th birthday in Venice and walking around and eating in Venice. I said, "You know what? I like this food and I want to try to emulate it in some way." And [Barbuto] is sort of my thought process from all those little bits and pieces of my history.

It's a Jonathan Waxman restaurant, so therefore by default it's a California restaurant.

I think that Colman's book about the Italian Riviera sums it up really nicely, because it's really a bit of French, it's a bit of Italian, a smattering of Greek. But there's a California sensibility about the seasons that's so important — you have these great tomatoes but there's really only three or four months a year that tomatoes are nice in California. In New York it's only like a month and a half. So, yeah, it was respect for the seasons. It was the enjoyment of the sun; if you look at the coastline of the Mediterranean and the coastline of California, they're very similar. Very similar in a lot of ways. So, yeah.

But isn't it larger than the food? This is very top of mind for me because I've been spending a lot of time out West and I've been talking about the '70s and '80s: You could draw a dotted line stylistically from where you started to this restaurant. There's the open kitchen. There's the pizza oven. It's a white, open space. This is really a California restaurant, but nobody really thinks in those terms anymore.

You agree with that?

I agree a hundred percent. It's a Jonathan Waxman restaurant, so therefore by default it's a California restaurant. (laughs)

Do you think that term still applies or do you think it's been subsumed? You did your first California restaurant in New York in 1984.

I think they needed a moniker for me, so I think they attached my home base as my moniker. Like Ludo from Taste is still French even though he's been in California for 15 years. You take somebody like Hubert Keller, I think he's still Alsatian. It's kind of funny, you know? I think you drag your culture with you. I mentioned Jimmy Bradley. I think Jimmy Bradley's still at heart a Rhode Island native; he still has that sensibility. Alice Waters is still a New Jersey girl. I think we never lose these things. Even if we get influenced by other factors. I think it's our childhood. 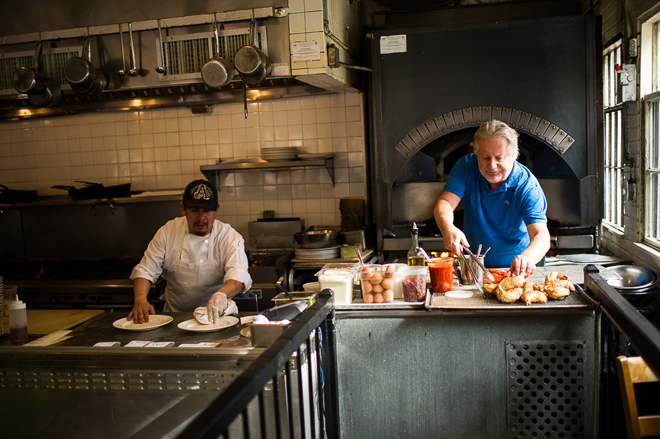 You've been cooking a version of your chicken since Michael's. This is your Piano Man, right?

Jeremiah Tower told me that he still remembers eating it for the first time at Michael's in Santa Monica around 1980, loving it, and running into the kitchen and finding you. When people started responding to that dish, were you surprised?

When they respond to any dish, you're surprised?

No, especially the chicken thing. Number one: I never plan a break out dish.

Well, you can't, right?
You can't. And number two, when the waiters started coming back and ordering more of them, I immediately wanted to take it off the menu, because that meant that it was too popular and I was going to get bored of it. And if I get bored, it might get stale. And then I realized that there has to be some sort of consistent customer satisfaction, that people do come back for certain dishes. So if you don't have them, there's going to be a disappointment level that would be — well, with the chicken, it would be horrible. When I first opened at Jams, I had a chicken that Larry Forgione had commissioned from a guy named Paul Keiser who was a microbiologist up in Rhinebeck. He used supposedly native birds and he fed them this unique diet. And they literally cost him $15 a bird in 1984. But they were wonderful.

So when people talk about it being a $20 dish in '84, that was the explanation?

That was the reason why. They cost $7 each and I probably should have charged $30 for them. I wasn't even making that much money off of them at $20.

$15 each but it's $7 a portion. At Jams I served them with French fries and a tarragon butter sauce. Here I serve them with a salsa verde and no accompaniment.

Since the beginning here?

Yeah, since the very beginning.

Stay tuned for part two of Andrew's chat with the chef on Eater tomorrow, and head over to Toqueland for more of Friedman's thoughts on Waxman's career and the 10 year anniversary of Barbuto.