Dieterle & Nosenzo on the First Year of The Marrow

Share All sharing options for: Dieterle & Nosenzo on the First Year of The Marrow 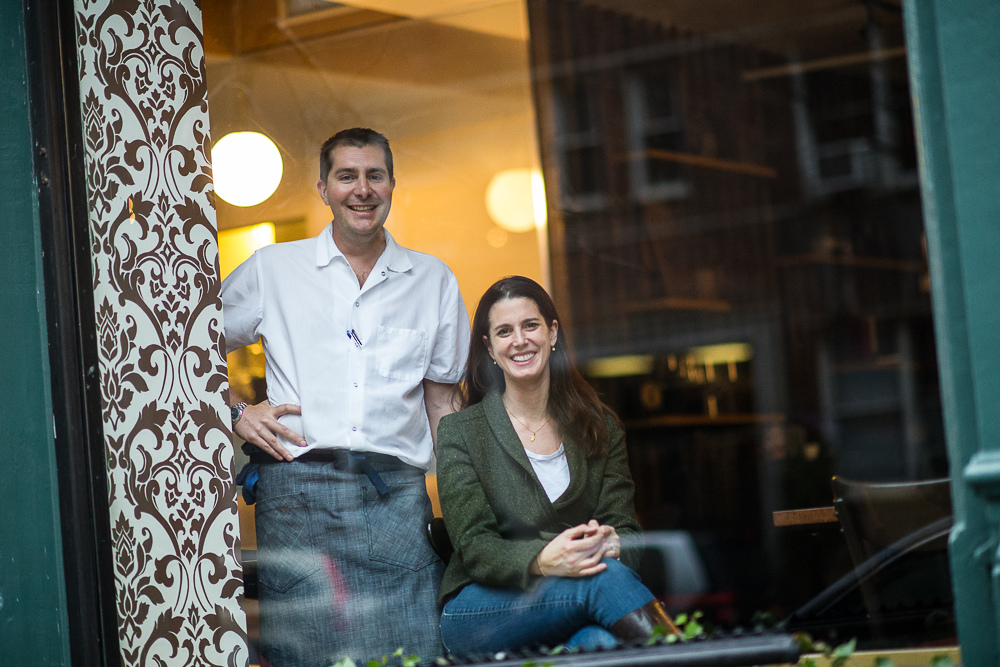 For their third restaurant together, Harold Dieterle and Alicia Nosenzo created a cozy Bank Street bistro with a menu inspired by Harold's German-Italian heritage. Some critics loved The Marrow, while others didn't quite connect with the overall concept. But Dieterle and Nosenzo continued to evolve the restaurant over its first year, and they developed a loyal clientele along the way. Here's a look back at the first 12 months of The Marrow from Harold and Alicia:

How was the third restaurant opening different from the other two?

Harold Dieterle, chef and co-owner: It's the biggest renovation we've done, and I'd say Sandy definitely kicked us back about a month.

Alicia Nosenzo, co-owner: Obviously, there was a week where we couldn't do any construction. We didn't have any physical damage, but our contractor had a lot of damage.

Harold: We couldn't get gas, and getting his employees to the city was an adventure every day.

Alicia: We were shooting for October, and that wasn't going to happen. It became November, then Sandy happened, and so it was mid-December.

How did things change in terms of the organization of your group for restaurant three? Was it a challenge to keep the standards up at the other two, while opening The Marrow?

Harold: It's a challenge every day. It's hard. It's one of those things where when we had two restaurants, one of us could be at the other one every single day, and now there are days where one of us isn't at a specific restaurant during service, which is a challenge for us.

Did you promote anyone, or pull anyone onto your team to do number three?
Alicia: Well, one guy that worked for us for a long time, he actually just moved to Nicaragua in the spring, but he wanted to do the opening and that was great. Jill [Roberts], our beverage director, I've worked with her and she's a very good friend of mine and I lured her back to the business.

Harold: Ginger [Fisher], our pastry chef at Perilla for a number of years, left to go check out the bakery lifestyle and wasn't feeling it. The second I got wind of that, I was trying to get her back.

Was the finished product different than what you had planned for Brooklyn?
Harold: It changed a lot. When we first had written the menu for the hotel, it was definitely a more meat-heavy/steakhouse feel. The developers we were working with had a very different design sense than we had. This gave us the opportunity to design it with more of our tastes in mind. 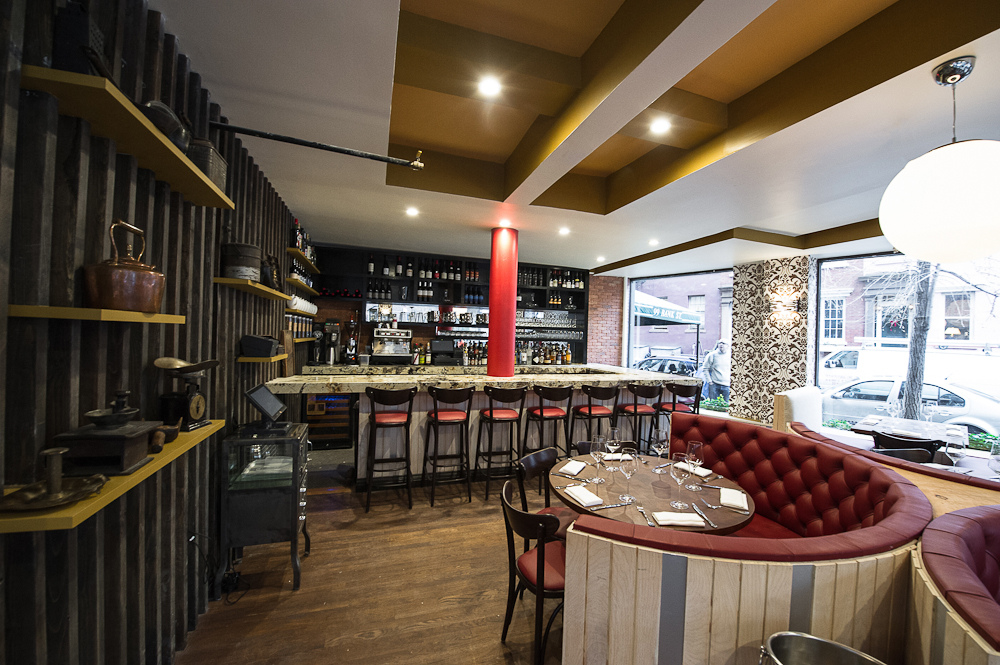 [The Marrow by Daniel Krieger]

Alicia: They were very modern, chic, and what's trendy, and we're definitely not chic. We're definitely more neighborhood-y. I mean it's beautiful in here with the windows, and it's really enjoyable to be here.

How did the opening go? Did people check it out during the holidays?
Alicia: It was busier than I expected that first week
Harold: We were getting food critic visits that first week, immediately.

Was that different than the other two openings?
Harold Dieterle: Yeah, well you know there was one point when we opened Kin Shop and we were super quiet the first month. Like, "Why are these two opening a Thai restaurant?" And it was very quiet, and I thought to myself, "Did we totally drop the ball and miss the mark here?" And then we started to get some very positive reviews, and it all worked out. But I was extremely nervous that first month. We weren't doing business, and we definitely did not get the early onslaught that we got here and at Perilla.

Why do you think that was? Were the expectations higher?
Harold: I just think there was a ton of pre-opening press here and maybe not so much for Kin Shop.
Alicia: I think Kin Shop surprised people. They weren't expecting that from Harold, the food. The comments about a white guy from Long Island cooking Thai food — that surprised them. People became really interested in the restaurant, because Perilla is so different than Kin Shop, and we set out to be something very different.

Do you think this is a slightly different neighborhood in terms of dining?
Harold: Definitely.

What's the cut-off, like Hudson Street?
Harold: I don't know! It's definitely different. I'd say that we probably get more destination diners than at the other two.

What, if anything, did you have to change after the first month? Harold: I mean, there are always things that don't make the cut, which is why you have the friends and family and you have a chance to test stuff out. We have a great partnership, because we're very honest with one another. She has an amazing palate, both wine and food, so if there's something that's not working, she's going to tell me immediately, and egos get thrown out the window. You have to be honest with each other. It's important, because a lot of chefs don't have a partner that's honest with them, and a lot of chefs can't take criticism from someone so close. It's a huge advantage, I think, for what we do for one another.

What did you think of the critical response?
Harold: It's crazy. When we had opened Perilla, we got pretty good reviews, but it seemed to be fairly consistent. With here, it was kind of all over the place, because all of the reviews came at sort of the same time. I guess there was no adjustment period. Steve Cuozzo and Ryan Sutton loved it, and Robert loved it, and Adam Platt came and gave us a mediocre review. It's disappointing. It was surprising. There was just not a lot of consistency.

Did you two make any changes after that review cycle?
Harold: Yeah, we definitely did. One thing the guests weren't really understanding were the categories on the menu, where they had my family's last names under each side. We've done away with that, and made it much simpler and easier to follow.

Was that hard to give up?
Harold: Nah, not really. I thought it was kinda cool and a way to categorize the menu, and I thought I made it easy to follow. I'm not a fan of the word "fusion." When people say, "It's German and Italian-influenced." Like, what is it? Fusion? Are there German and Italian elements in each dish? I thought that was a way to make it very clear that that was not what we were trying to do. People weren't getting it. They were asking the servers a lot of questions, and I didn't want to create something confusing.

Alicia: I think it's a really good menu. It makes me sad that there is this rush to judge restaurants so quickly. It takes a while to find the groove and get the feedback from guests and staff and to make it work. This happened with us at Perilla, when we opened — the menu got better and better and better. And the same with Kin Shop — it evolved, and it's really good right now.

When do you think you hit your groove? Was it before or after the critics all came in?
Harold: Definitely after. To be a new restaurant, you're still figuring out where things are living, and you're feeling your way around the room, and you're constantly trying to figure it all out. We opened the private room downstairs, which wasn't open when we first started. That's a new thing we offer for guests. It's a different experience.
Alicia: We've done some fun dinners down there — special wine dinners and wine-maker dinners — and that's been really fun. Finding your groove...I think we're in a really good place, but we're always tweaking and trying to grow and make it better. It's non-stop.

Did you find that the foodie masses moved on after the first few months? Or did things stay busy?
Alicia: I mean in summer, it definitely slows down in this neighborhood. Summer, you're never sure what's going to happen. Come September though, we were back in the groove, and we had a good fall season.
Harold: Yeah there was a conscious effort to definitely lighten the food up in the warmer months. With the name,The Marrow, and a lot of dishes being meat-focused, we made a conscious effort to try and lighten it up and make it appealing to everybody.

Are there any dishes on the menu that you wish people would order more, or things you like that haven't caught on?
Harold: Well, right after New Year's, we do an Italian traditional dish, cotechino, and I think our cotechino is exceptional. That's a fun dish we're doing right now.

Do people order the big steaks?
Harold: Yeah. I'd say by far, the two most popular dishes are the bone marrow and the duck schnitzel.

Harold, are you still splitting your time between all three kitchens these days?
Harold: Yeah. I probably spend the most time here and at Kin Shop. We made the chef that we opened with at Perilla a partner, so that works well.

Is three a good number for you now? Are you thinking about number four?
Harold: Too early to say.
Alicia: I mean, it's really great that they're so close. I can't tell you how many times that one or both of us have run out from one place to another to deal with an issue. I live in Brooklyn, so I was excited to do it in Brooklyn, but I'm really happy they're so close. It makes it easier for us to really be in all three places, I walk between all three restaurants. Sometimes we're needed more in one place than another.

Harold: It all depends on what's going on. I think we've had a steady growth model, and it's working well. We generally wait well over a year before we start thinking about the next one, just because we see peers of ours expand a little too fast and it comes toppling down. And we definitely don't want that to happen.

What's the status with the burger? Is it still brunch only?
Harold: No! You can get in on the bar menu, or at a table, too.

I know it has a lot of fans. Do people come in just for the burger?
Harold: Yeah, it's my first beef burger. I do a duck burger at Perilla and we've done a goat burger at Kin Shop. This is my first step into the beef burger game.

Do it feel like it's been a year?
Harold: There are times where I feel like I can't believe the time has gone by so fast, and there are other times where it's like, "Ugh."
Alicia: It's been a jam-packed year. It's been a challenge with growth and to be in every place and make sure we're doing what we want to do. I've worked for larger companies and that's the hardest thing. You can have this great philosophy but if you can't manage it, it doesn't mean anything. You have to really get everyone on the same page, and that's a constant challenge for this job.
· All Coverage of One Year In [~ENY~]
· The Marrow [~ENY~]