Share All sharing options for: Inside Caviar, a New Premium Food Delivery Service

"The hard part was picking a name," says Jason Wang, the CEO and co-founder of fledgeling online food delivery service Caviar. He says this nonchalantly, as if entering the seemingly saturated marketplace of online food delivery with a service that charges a fee, against competition that by and large does not, is a trifling matter.

Caviar offers delivery from a curated list of select restaurants for a flat fee of $9.99. In many cases, the restaurants it features do not offer delivery of any kind, or if they do, Caviar will deliver beyond the usual delivery range.

Wang is a graduate of U.C. Berkeley with a background in finance and professional experience with Google. While this might not seem like the most logical resume for entry into the food service industry, Wang is an avid diner with his own food blog and a passion for food photography.

Caviar launched with 30 restaurants in San Francisco in March 2013. According to Wang, the venture reached profitability by the summer of that year. Caviar expanded to New York and Seattle in November of the same year and there are plans, although no specific details, to roll out to more major cities while adding a restaurant a week to the roster in each market.

The restaurants Caviar services currently total less than 50 even in its most prolific market, which is San Francisco.

Caviar is distinct from its most obvious competitors like Seamless Web, Grub Hub, and Delivery.com in a number of ways. There is, of course, the delivery fee and the fact that the restaurants are curated from the perspective of the food enthusiast. The restaurants Caviar services currently total less than 50 even in its most prolific market, which is San Francisco. But Caviar also employs its own fleet of what the company calls "food messengers" to deliver the food, rather than relying on the restaurant to do so. 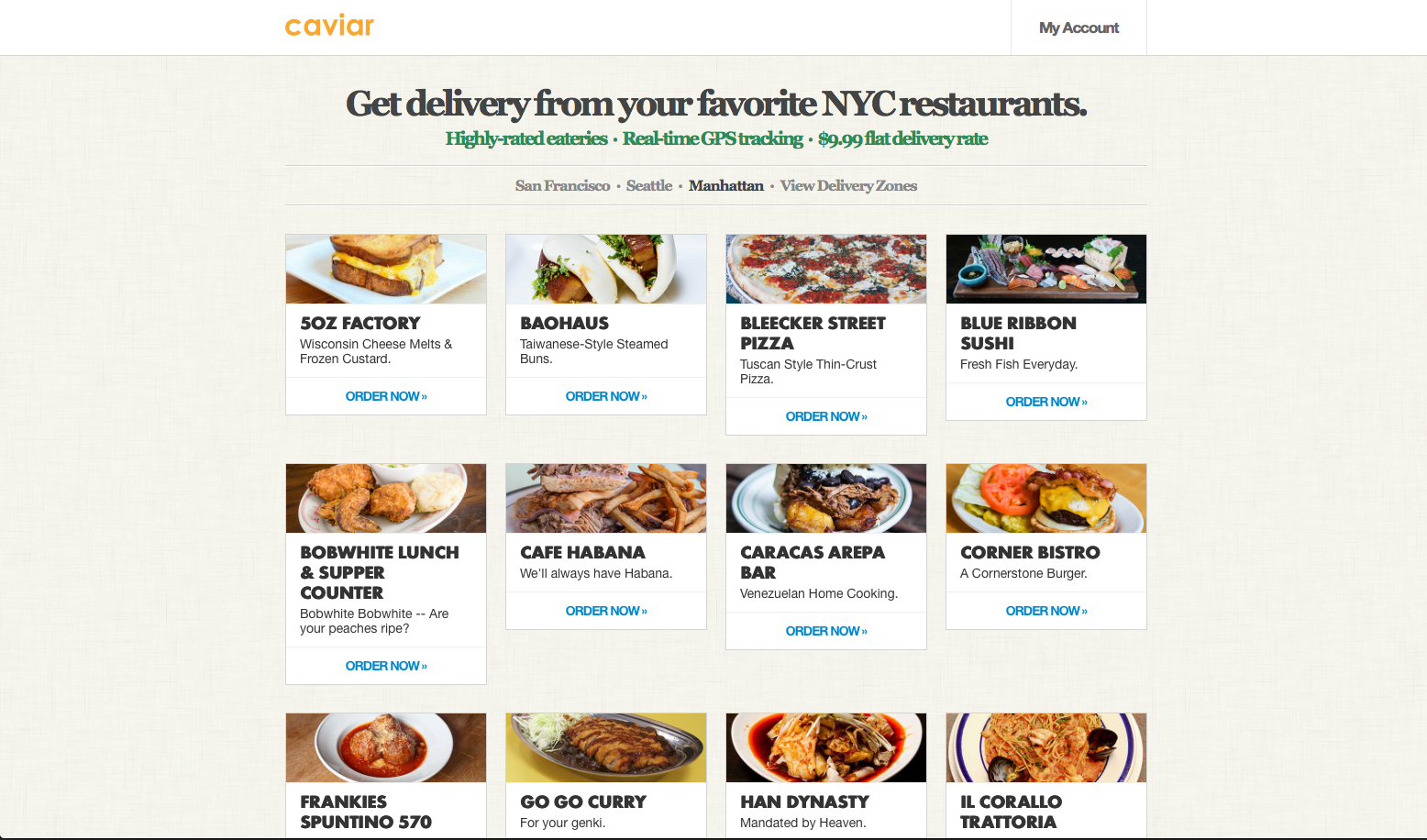 Compared to ordering through rival services, whose bewildering restaurant lists can stretch into the hundreds, ordering food through Caviar is a comparatively straightforward and uncluttered experience. The relative sparseness of Caviar's offerings has the paradoxical effect of making you feel as if you actually have more choice because you aren't looking at 24 places all selling pizza. In general, Caviar selects only one vendor for each type of cuisine.

If nothing else, the website serves as an excellent visual guide to the featured menus.

Much of Caviar's viability comes down to good design — the website looks and feels sleek and contemporary. Setting up an account is quick and seamless. And when it comes to choosing a restaurant, one is presented with a clear matrix of choices featuring well photographed shots of the food. In fact, every single dish that Caviar offers for delivery has a corresponding image. "Photography is in our DNA!" exclaims Wang enthusiastically when queried about the sheer volume of images on the Caviar website.

Caviar hires its own photographers for the exhaustive process. "No one else is doing this," claims Wang. If nothing else, the website serves as an excellent visual guide to the featured menus. "It was the most intense photo shoot we have ever done," says Jake Dell of Katz's Delicatessen, a Caviar client. It took over four hours to document the entire menu totaling over 60 images.

To test out the service I had food delivered from Momofuku Ma Peche on 56th Street and Fith Avenue to the the Vox Downtown offices on Cooper Square, a distance of 3.4 miles. I placed the order at 11:37 a.m and scheduled the delivery for 2:30 p.m. Navigating the Caviar website was easy, and the vivid photography really did a good job of selling the food. Once the food messenger left the restaurant, I received an email notification and was able to track his progress via the web.

Despite the delivery window being an hour wide, my order actually arrived a few minutes early — total transit time was around 25 minutes. Wang claims that the average time across all markets is generally 17 minutes door-to-door and only a minute more on average in Manhattan. 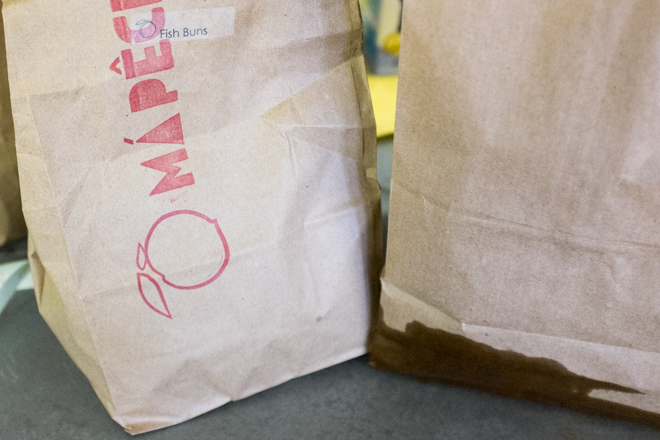 I asked Wang if Caviar furnished or paid any special consideration to the packaging, but he pointed out that all restaurants offer take-away and doggy bags already and thus have supplies even if they don't offer delivery. This is fine in theory, and Ma Peche's packaging might have survived a casual walk from the restaurant, but it was not so lucky on the bumpy, pothole strewn bicycle ride down from Midtown. The oil from the rice cakes leaked all over the bag, leaving a greasy slick in its wake. Fortunately the offending dish was on the bottom of the bag.

The rest of the food arrived intact and warm enough to not cause complaint. But, aside from the novelty of getting Ma Peche delivered to Cooper Square, there was nothing particularly luxurious or notable about the service. The packaging was obviously not designed with delivery in mind, and the food tasted just like good food that is delivered, which is to say never as good as the same food in the restaurant. This is, of course, endemic to all delivery services and a compromise that is inevitable.

The food messenger did at least apologize meekly for the mess, but there wasn't much he could do other than shrug his shoulders. The kitchen had closed at exactly the same time that he arrived, and it took him the better part of half hour to make it downtown from the restaurant, anyway. That said, the messenger was extremely courteous and polite.

So was the Caviar messenger that I encountered early one evening outside of Han Dynasty — he was politely bumming cigarettes from passers by while slouched outside the restaurant, slurring his words so as to suggest that he was high as a fucking kite. I didn't even realize that he worked for Caviar until he handed someone a Han Dynasty menu in exchange for a cigarette. 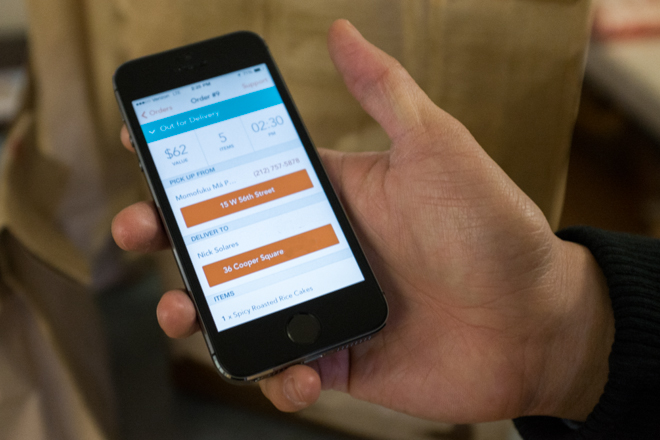 And this is the nexus where digital construction meets physical reality. In a similar way to using Uber, ordering through Caviar fundamentally changes some key aspects of the procurement experience. But when your ride or meal shows up, you are talking about the same type of cars and delivery methods crossing the same streets and with labor drawn from the same pool. You pay a premium with both services, but it is mostly about convenience and only really apparent at the front end of the process.

In New York, which Wang considers his biggest potential market, Caviar launched with 30 restaurants, most of which are exclusive to Caviar, meaning that they don't use competing services like Seamless or Grub Hub. These include such notables as Pok Pok Phat Thai, Han Dynasty, and Blue Ribbon Sushi, while others, like Katz's Delicatessen and Porchetta, are platform agnostic, offering their food across many competing services.

From the perspective of the restaurant there are obvious advantages to not having to employ full time delivery personal. Wang points out, for example, that because Caviar has a fleet of messengers, he can deal with surges more effectively than restaurants by marshaling his resources to busy locations. 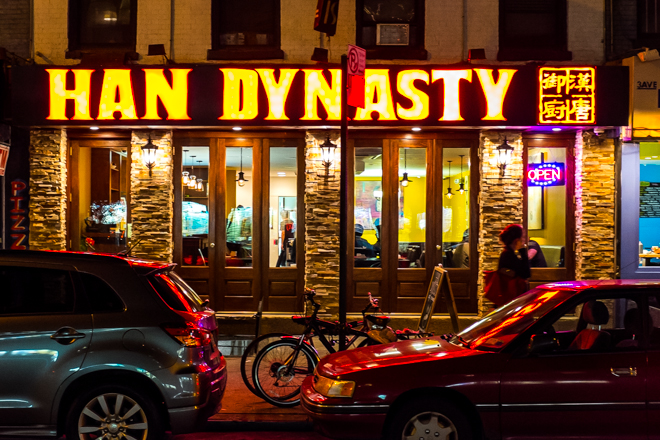 Han Chiang of Han Dynasty, the popular Philadelphia Sichuan chain that has taken Manhattan by storm, is trying out the service. "I knew I didn't want to deal with the liability issues of employing delivery staff," he says. In Philadelphia, where Caviar has yet to make an inroad, Chiang uses the Dash service for same reason. Being that Han Dynasty is generally quite affordable, Chiang struggles with the added cost issues associated with ordering through Caviar as it potentially alters the restaurant's image of affordability.

It seems evident that the business model favors large corporate accounts rather than individual orders.

Wang is cagey about actual customer numbers, refusing to give hard figures. He claims registered users — those that have set up a log-in via Caviar's webpage — number in the "tens of thousands" and that 51 percent convert to becoming paying customers. It seems evident that the business model favors large corporate accounts rather than individual orders.

Indeed, Wang states that 40 percent of his customers are corporate, and those orders account for 65 percent of Caviar's revenue. Given the $9.99 delivery fee, it doesn't make much sense to order meal for one, unless you absolutely must have the eponymous sandwich from Porchetta right this second and you live on the Upper East Side and can't leave your present location. "You would be surprised at how small some of the orders I get are," says Porchetta's chef Sara Jenkins. At that point Caviar, as it name implies, is essentially a luxury service. 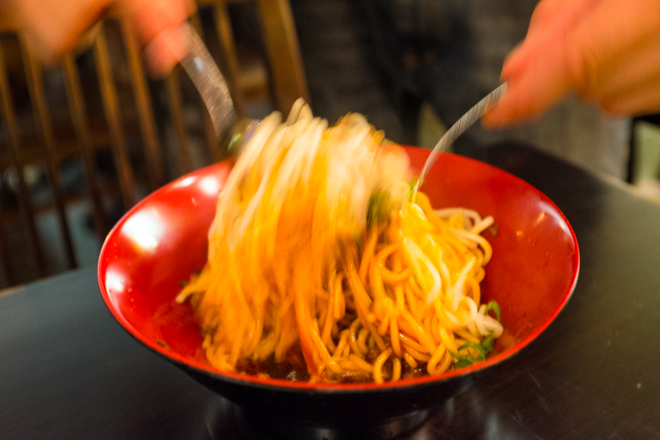 Further illustrating this point, and something that Wang didn't explicitly mention, is the fact that the prices on Caviar's website are often higher than those in the restaurant. A Bistro burger, for example, costs $8.75 at Corner Bistro but goes for $9 on Caviar; Han Dynasty's dan dan noodles sell for $7.95 in the restaurant but you will be charged $8.70 per order online. Curiously, not every menu item is higher —  the aforementioned sandwich at Porchetta costs $12 both in the restaurant and via Caviar.

Caviar, as it name implies, is essentially a luxury service.

And the unexpected costs don't end there. In addition to the $9.99 and inflated menu prices, there is an across-the-board 18 percent gratuity applied to all orders in addition to sales tax. My order of $62 worth of food from Ma Peche topped $88 after tax, tip, and delivery charge. The food messenger keeps the entire $9.99 charge as well as an undisclosed percentage of the gratuity with the balance going to Caviar, along with the surcharge on the food items.

Jenkins feels that Caviar has a relatively strong business model. And certainly from the restaurateur's perspective there appear to be few downsides. There is no long term commitment on their part — a restaurant can opt out at any time — and there is no monthly fee. "We have the right to refuse an order if we are too busy," reports Lisa Lubart of Blue Ribbon Sushi, who is using Caviar to expand business into Midtown Manhattan and gain exposure to corporate accounts that they wouldn't otherwise have access to.

Chef Danny Bowien is familiar with the service both as a restaurateur and a consumer. He used Caviar at Mission Chinese, the temporarily shuttered NYC outpost of his wildly popular San Francisco restaurant. (He uses his own delivery service in California.) Starting this week, Bowien's Lower East Side Mexican hit Mission Cantina will employ Caviar as its exclusive delivery company.

"I wasn't convinced that I needed the service," says the chef, "but once I tried it from home and I was able to order Frankies Sputino 570's eggplant parmesan from my couch, I changed my mind." Bowien sees Caviar as a premium service.

Wang for his part has his eyes set on expansion. Currently, delivery is restricted to Manhattan below 59th Street, but Wang plans to extend the range by 20 blocks north in the near future and would like to reach 100 restaurants. He is also contemplating branching out into Williamsburg, Brooklyn.

There is no doubt that Caviar is joining an already crowded online food delivery marketplace and doing so by offering a premium service. Whether the market sees the added cost as justified remains to be seen, but in Caviar's favor it offers some compelling features that distinguish the company from its competitors.