A First Taste of the Sandwiches at Midtown's Untamed

Share All sharing options for: A First Taste of the Sandwiches at Midtown's Untamed

It's Friday just after 1 p.m., two weeks after the doors swung open at Untamed, a new Midtown sandwich shop specializing in braised meat. It's a genius idea, since the preparation method can make a tough and inexpensive cut tender, imbuing the meat with powerful flavors while cooking a large quantity all at one time. Already a line snakes around the room with a young and well-dressed crowd who squint up at the chalkboard menu that covers one wall. The small storefront is well-designed for its purpose, outfitted with salvaged wood and a single large raised table that can accommodate 12 on backless stools, while another five sit in the window. The dining-in arrangements are clearly inadequate at peak hours, but the customers seem happy to scrunch together at the table or carry out and eat back at the office. In warmer weather, you could sit along nearby Broadway or in Bryant Park. 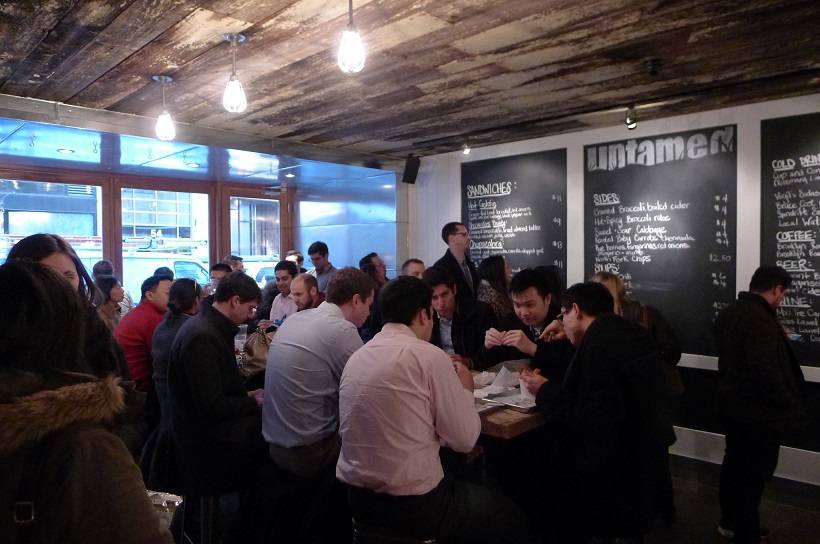 In two visits — one during crowded combat conditions, another when the place was nearly empty after a rush — I ate three of the six sandwiches offered, which ranged in price from $9 to $13, plus tax. All come on a narrow, crusty, six-inch roll, and are concept-oriented, with three or more items in each sandwich in addition to the braised main ingredient. 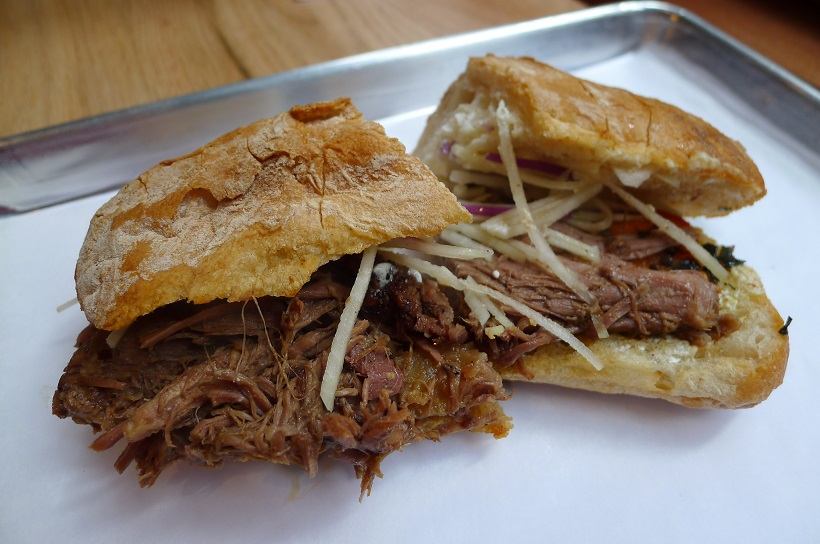 Named after a mythical monster that sucks the blood of goats, Chupacabra is the most expensive, a couple of hanks of braised goat dressed with Moroccan carrot salad, goat cheese, and kohlrabi slaw. The sandwich is delicious, a perfect marriage of flavors, but seems small for the price. 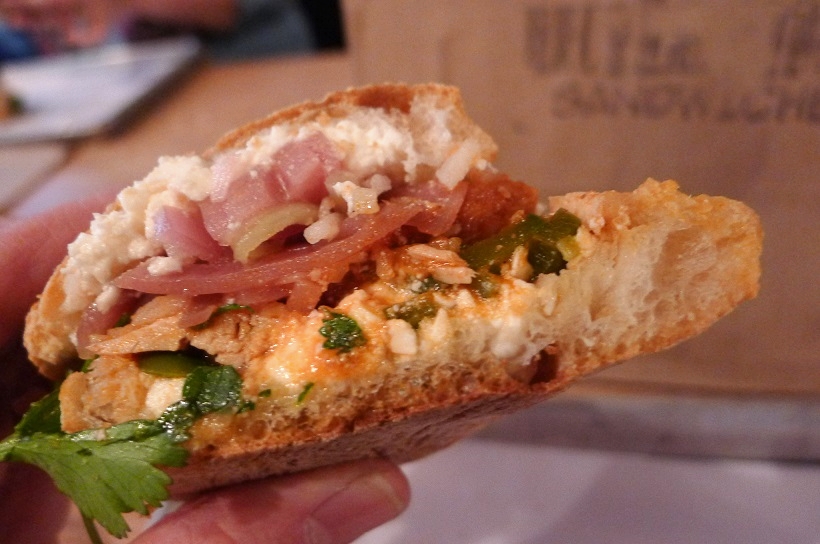 Invented along the same lines, the General Zapata showcases chicken braised in tinga, a Pueblan sauce of comparatively recent vintage made with chipotle peppers. But the pieces of chicken derive too little flavor from the braise, and heat is provided by pickled jalapenos instead, while radishes, pickled onions, and fresh cilantro further obscure the flavor of the sauce. The sandwich is lively, but meat-lovers will be disappointed. I dug the vegetarian Carla Bruni sandwich, named after the former first lady of France. This vegetarian beauty (the sandwich, not the first lady) features braised vegetables, stavecchio cheese, olive spread, and basil, but manages to taste positively curried. 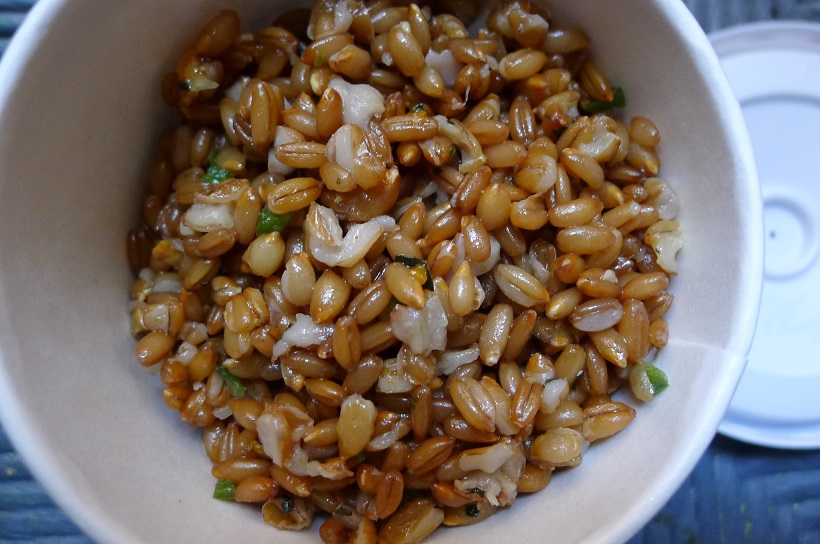 In addition, there are sandwiches centered on pork butt, brisket, and charred broccoli, plus a host of sides, which mainly seem like things also featured in the sandwiches. I didn't like either of the two sides I tried ($4 each): the "hot and spicy broccoli rabe" wasn't cooked enough and the stems were tough as nails, and rye berry salad featured undercooked grain and not enough of the advertised tangerine and mint flavors. Blah! Other glimpses of sides seen in the sandwiches, such as the chermoula carrots, were more promising. 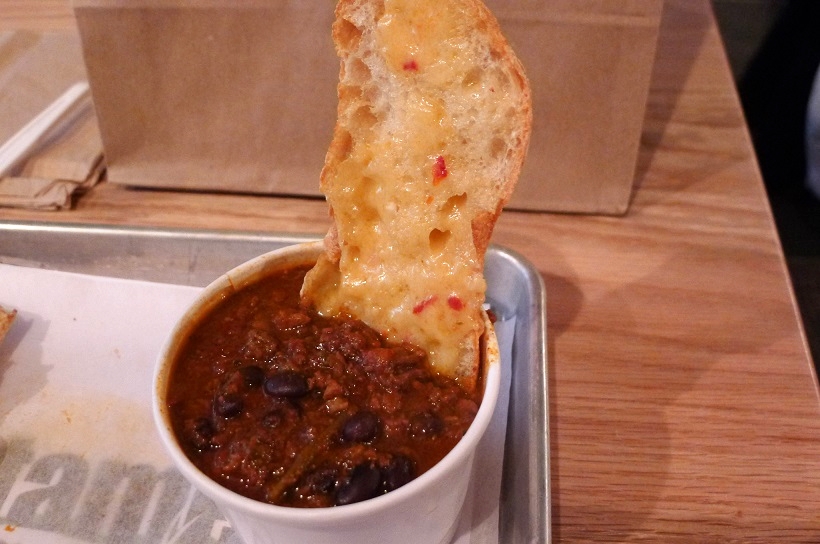 Chili con carne ($6), with just a few black beans, is provided in generous quantity, with a piece of toast with melted cheese sticking out the top like an Olympic banner. The only problem is sweetness, and a seeming total lack of cumin, the seasoning that defines chili for me.

Beer and wine are available at this casual spot at rather uncasual prices — wine $8 or $9 per glass; beer $6 to $8 per can, the latter for a tall boy — a trick learned from Shake Shack. A surprising number of customers were taking advantage of the option.

With their small size, the sandwiches seem designed to be unshareable; which means that, with any combination of side, chips, beverage, or dessert, your tab is likely to be $20 or more. Which made me wonder, are sandwiches destined to be the new upscale meal?