Kajitsu, Manhattan's Only Restaurant Dedicated to the Meat-Free Fare Beloved by Buddhist Monks

by Kat Odell Updated Nov 21, 2014, 3:46pm EST
Via All Editions of Eating Japanese [ENY] and All Coverage of Kajitsu [ENY] | Photography by Nick Solares
1 comment / new

Share All sharing options for: Kajitsu, Manhattan's Only Restaurant Dedicated to the Meat-Free Fare Beloved by Buddhist Monks

Kajitsu, a serene, Michelin-starred Japanese establishment on East 39th Street, has quietly been serving one of Manhattan's most ambitious meatless menus for the last five and a half years. What began as a 28-seat eatery dedicated to vegan shojin ryori cuisine in the East Village (now home to Cagen), shifted uptown nearly two years ago into a roomier bi-level space that's jazzed up with a branch of traditional Japanese tea bar Ippodo, and a second, more casual non-vegan restaurant, Kokage.

Kajitsu is the city's only option for shojin ryori, an ancient vegetarian Buddhist diet originally consumed by monks in Zen Buddhist temples. The cooking is centered on the Buddhist belief in non-violence, which is why animals are never killed and served as part of a meal. Traditional shojin ryori also shuns animal products like eggs and butter, although more contemporary meals sometimes include milk and honey. Early on, some monks prohibited the consumption of sake, while others embraced the drink as a medicine. 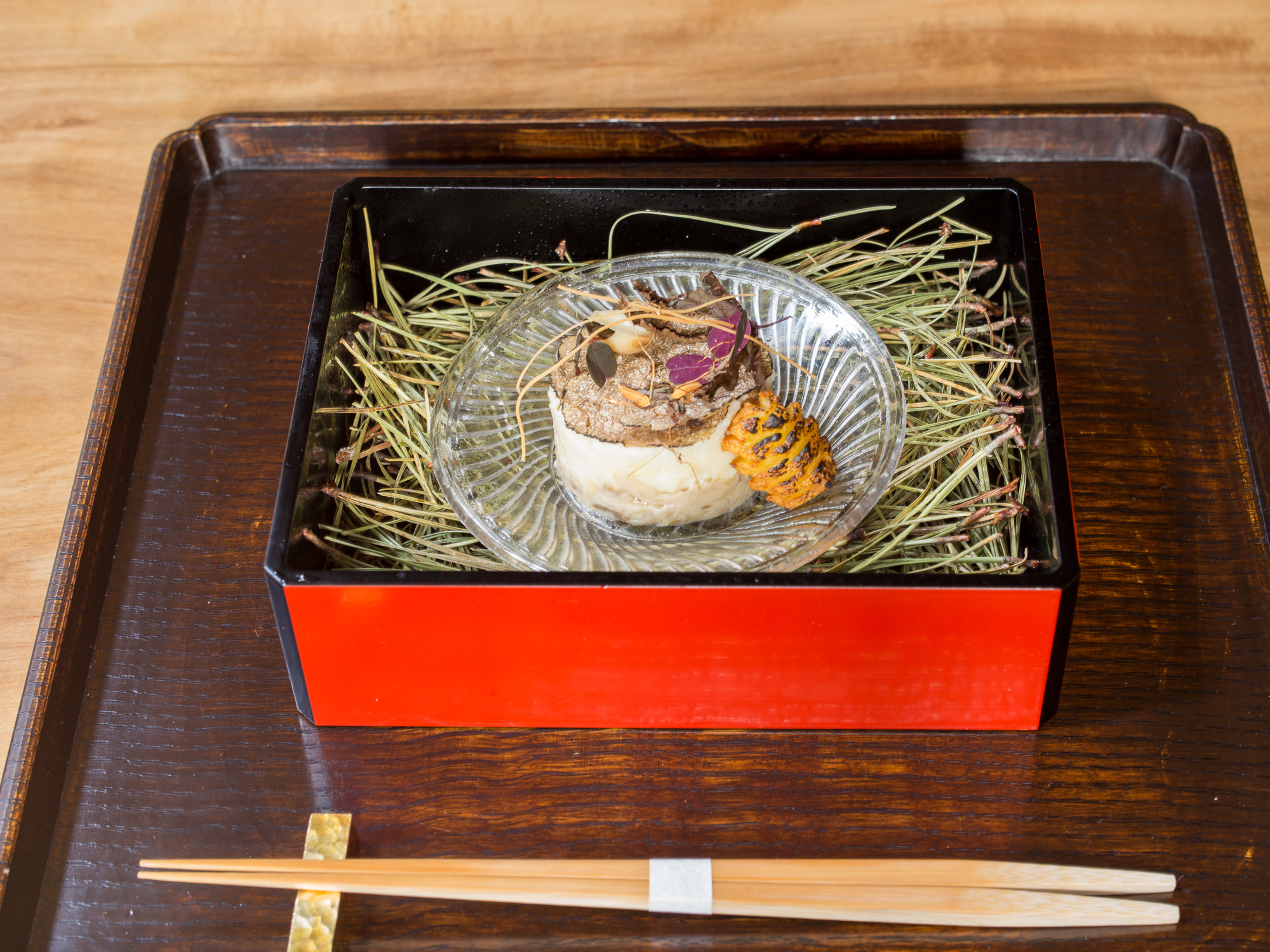 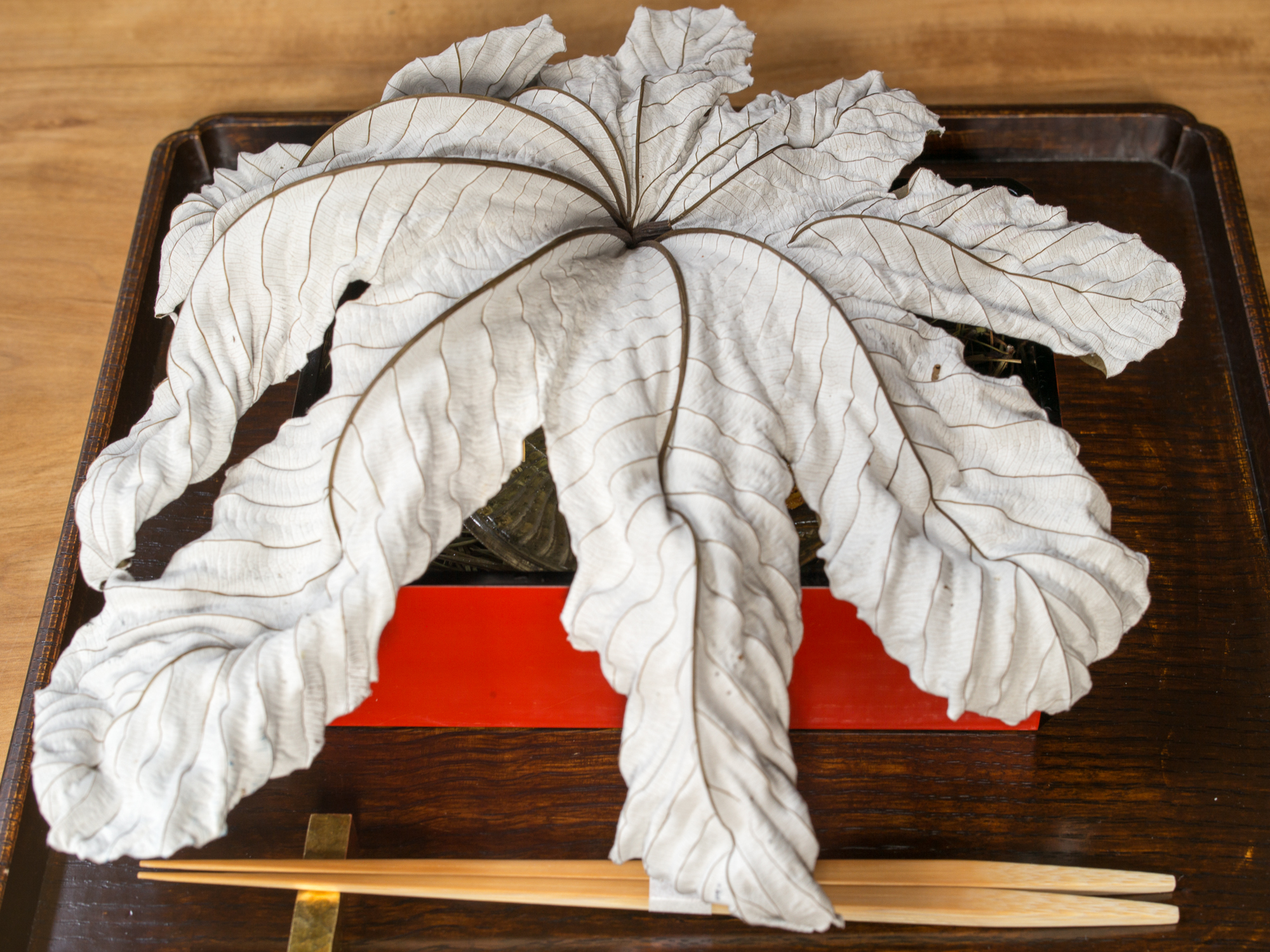 Shojin cuisine was born almost 3,300 years ago in India, then spread to China, and finally came to Japan around 1,300 years ago. But it wasn't until around 1300 that Japanese shojin ryori began to spread, thanks in part to the rise in popularity of traditional Japanese tea ceremonies, where shojin cuisine preceded the service. Shojin ryori is considered the earliest form of Japanese cuisine originating in Kyoto, and one that set the stage for kaiseki and kappo style meals that followed. To this day, shojin restaurants in Japan are few and far between, and the places that do exist are usually located in either Kyoto or Tokyo.

Despite shojin's stringent dogma, cooks have modified the cuisine over the centuries, and nowadays many different styles of shojin cooking can be found throughout Asia. But the most common interpretation of shojin ryori in Japan excludes all animal products, garlic, and vegetables in the onion family. Kajitsu embraces common Japanese shojin style cooking. It's a Japanese restaurant that observes American vegan cooking laws, but in line with shojin, it excludes garlic. Onion, on the other hand, is still fair game.

Chef Hiroki Odo — who studied architecture before learning to prepare kappo and kaiseki cuisine in Kyoto and Tokyo — has been ensconced at Kajitsu for the last two years. Without any prior experience cooking shojin ryori, he joined Kajitsu's original East Village location as sous chef, working under then executive chef Ryota Ueshima. His base in kaiseki helped him pick up the craft, and this past spring he was promoted to executive chef, now overseeing the restaurant's impressively detailed dishes built from just fruits, vegetables, nuts, seeds, grains, and mushrooms.

Dishes are hyper seasonal and composed of locally sourced product, with certain ingredients only in season for a matter of days. For example, a recent Kajitsu meal commenced with fresh osmanthus tea, made from a tree blossom in season for just three to five days. Although most of the ingredients Odo cooks are from New York or just outside the state, he does import mountain yam and myoga (a Japanese flower bud that's like a cross between ginger and an onion) from Japan. Odo pickles the myoga in sweet vinegar and serves it among a medley of 29 other ingredients, including boiled peanuts, fried then grilled gingko nut, and nama-fu or wheat gluten.

Kajitsu owner Shuichiro Kobori chose to open a restaurant that, beyond rigorously honoring traditional shojin ryori, is above all else an edible museum of sors, which shows and teaches Kyoto-style Japanese culture. Kobori is a nama-fu master, nama-fu being an essential component in shojin cuisine. Despite operating Kajitsu in New York, he lives in Kyoto and owns Fuka, a 150-year-old family-run company that makes traditional nama-fu.

Every month Odo changes his menus to reflect the Japanese cultural interpretation of a given season explained through specific ingredients. Right now persimmons, chestnuts, and turnips appear, but next month he'll shift over to celery root and daikon, the king of all Japanese winter vegetables.

In Japan, November represents the beginning of fall, when the weather grows chilly and leaves fall. Thus Kajitsu's mid-priced $95 "Hana" menu commences the first of its eight courses with a fallen Aralia leaf laid over a lacquered black and red box, which conceals a hockey puck-sized potato cake adhered together with tartar sauce and crowned with a few curls of Burgundy truffle. Be it lunch or dinner, Kajitsu offers only tasting menus in varying degrees of elaboration. During lunch, three or four courses run $45 or $50 respectively, while dinner is more of a show. Grab a seat at the chef's bar for the full shebang. At $205, the priciest meal option that involves fancier ingredients like white truffles, and a beverage pairing. But the "Hana" menu is pretty similar minus the white truffle, and then there's also a four courser for $55.

An interesting cultural distinction lies in the difference between fancy domestic tasting menus and extravagant Japanese omakase meals. In the US, tasting menu prices directly correlate to the number of courses served and the ingredients presented. Meanwhile, at high-end Japanese kaiseki restaurants offering varying omakase menus, the food doesn't change so much from one menu to the next. Rather, the pottery on which the food is served varies, with more expensive menus incorporating pricier tableware. Just like in a traditional Japanese tea ceremony, using artful dishes is a way for the chef or restaurant to show gratitude toward the guest by offering him or her expensive dishes. Similarly, all the intricately detailed tableware used at Kajitsu is imported from Japan, from gorgeous ceramic soup spoons to rustic hand-painted bowls.

Though rooted in traditional shojin ryori, chef Odo considers his menus to offer a slight contemporary spin. And it's not strict vegetable cookery that he finds most challenging. Rather, his biggest battle is creating Japanese flavors using Western produce. But all those restrictions and obstacles only compel him to experiment with ingredients in more inventive ways. It's unlikely that one would find that aforementioned tartar sauce affixed potato cake in Japan. But it's also unlikely that one will find his soba seed hijiki rice anywhere else in New York.