Every thing you need to know about spare ribs, St. Louis style and baby backs in NYC.

The pork rib was once considered to be an off-cut, relegated to the economy section of the butcher's case. But its popularity has risen dramatically in recent years, so much so that some ribs can compete in price and demand with those "high on the hog" cuts like loin chops. There are a number of reasons for this phenomenon. The most obvious, of course, is that pork ribs are simply delicious. The increasing popularity of barbecue is another factor. The St. Louis cut rib is a staple of barbecue competitions, and the explosion of televised events, as well as the growth of the cuisine beyond the South, has led to an increased consumption of the cut. One also can't discount the influence from such popular cultural items as the intensely annoying Chili's baby back ribs jingle and the McDonald's McRib sandwich (which of course isn't even a proper rib, but a mash of different pork cuts). But New Yorkers have been enjoying ribs for decades in many ways beyond just these.

The most obvious example is the Chinese style spare rib, commonly seen in the windows of Chinatown restaurants, hanging alongside ducks and char siu pork shoulder. It's a staple of most Chinese menus around town. At these restaurants, you commonly find spare ribs roasted in ovens with a thick, syrupy glaze that dyes the meat pink. While often referred to as "barbecued," they are distinct from traditional American barbecue, being neither smoked nor grilled.

Pork ribs also find expression in a great number of other Asian cuisines offered around town, at Malaysian, Filipino, Thai, and Vietnamese restaurants. In many cases, however, they're more influenced by local American customs and appetites than the native cuisines.

Rather than being smoked over wood, the majority of "barbecue" ribs sold in NYC have historically been steamed, braised, or roasted, and then finished off with a barbecue sauce on a grill to give them a crispy, charred exterior. This is not what a purist considers the true form of barbecue, since the rib is not actually smoked with wood. Nevertheless, this is precisely what many New Yorkers knew as barbecue ribs until around a decade ago, when real wood smoked barbecue became firmly established in the city. The unsmoked form of rib is what's served at Georgia's East Side BBQ and the Dallas BBQ restaurants, as well as at national chains like Chili's, Houston's (Hillstone in NYC), and Tony Roma's. Baby backs are most often used, rather than spare ribs or St. Louis style, the traditional barbecue cuts. Baby backs, like loin chops, are quite tender, but do not have a lot of flavor, which is why they are often doused in sauce.

This lack of flavor has a lot to do with the way that hogs have been bred in the last few decades —- to be lean enough to be considered the "other white meat." Thus, the loins of commercial grade hogs tend to be quite lean, while the spare ribs, which are cut from close to the belly (where bacon also comes from), have far more marbling. Because consumers have responded positively to both ribs and fat, many packers will leave extra loin meat on the baby backs.

Note that the National Pork Board dropped the "Other White Meat" campaign in 2011, at the height of the bacon fad, and at a time when there was a renewed interest in naturally fatty heritage breed hogs. Rib meat, even on commercial grade hogs is well marbled and flavorful. However, all rib meat requires slow cooking times to breakdown all the collagen and connective tissue. Smoking, braising, roasting, poaching, slow grilling and even sous vide can all be effective methods of cooking ribs. Here is a breakdown of the various cuts:

Spare ribs come from immediately below the loin primal. A full rack contains at least 11 bones, and as many as 13, with coastal cartilage, brisket bones. Spare ribs will often contain a portion of the sternum. The meat of the spare rib comes from two principle muscles — the intercostales intern, which lies between the ribs, and the transverses abdomens, found along the outside face of the ribs. All rib cuts are covered on the inside surface by a thin membrane called the peritoneum, which is usually removed prior to cooking. A rack will often include the diaphragm, also called the skirt or flap, which lies on the inside of the rib cage. This is the same muscle that gives us beef skirt steak, although it is significantly smaller on hogs than beef cattle. The diaphragm is often removed when preparing spare ribs, because it tends to become overcooked before the rest of the rack is ready. A full spare rib rack weighs an average of around two and a half to three and a half pounds. It will generally have as much or more bone and cartilage than meat, making it difficult to cook and portion. Because of this, sparerib racks will most often be cut down into a St. Louis style rib.

A St. Louis style rib is fabricated from the spare rib by squaring off the rack. The cartilage, brisket bones, flap meat, and rib tips are removed, giving them a neater appearance. This makes the rack easier to both cook evenly and to portion. As with spares, a rack contains between 11 and 13 bones and can also contain the diaphragm. The typical rack weighs between two and three pounds. St. Louis ribs will sometimes be confused with baby back ribs (see below) because of the similar shape. However, cut from the same hog St. Louis ribs will be bigger and the bones do not curve as much.

Technically called loin back ribs, baby back ribs are not from piglets, but rather from hogs that have reached market weight, but are not fully grown. Baby backs are cut from the upper section of the rib, nearest the spine. They are in fact the top of the spare rib. They are literally cut from "high on the hog" as they come from the loin, which is the most expensive and prized pork primal. If you have ever had a bone-in pork chop with a curved bone it was cut from the rib section of the loin, and is in fact the same bone found in baby back ribs. Baby backs are the result of stripping away the longissimus muscle, popularly called the eye of the loin, and then removing the chine and feather bones.

This is usually accomplished with a band saw but it is possible to do by hand. Baby backs usually contain a portion of loin meat on the curved face of the rib, along with the intercostal meat — the intercostales intern muscle — that connects the bones. This is sometimes referred to as "finger meat." Baby backs have a reputation for being tender, if not especially flavorful. A full rack contains at least eight, and as many as 11 ribs. Baby backs account for a significant portion of ribs sold in restaurants as "barbecue," but they are not really traditional to the cuisine. Barbecue historically has revolved around taking the cheapest cuts of meat and making them toothsome — this means spare ribs, not the "high on the hog" loin rib. 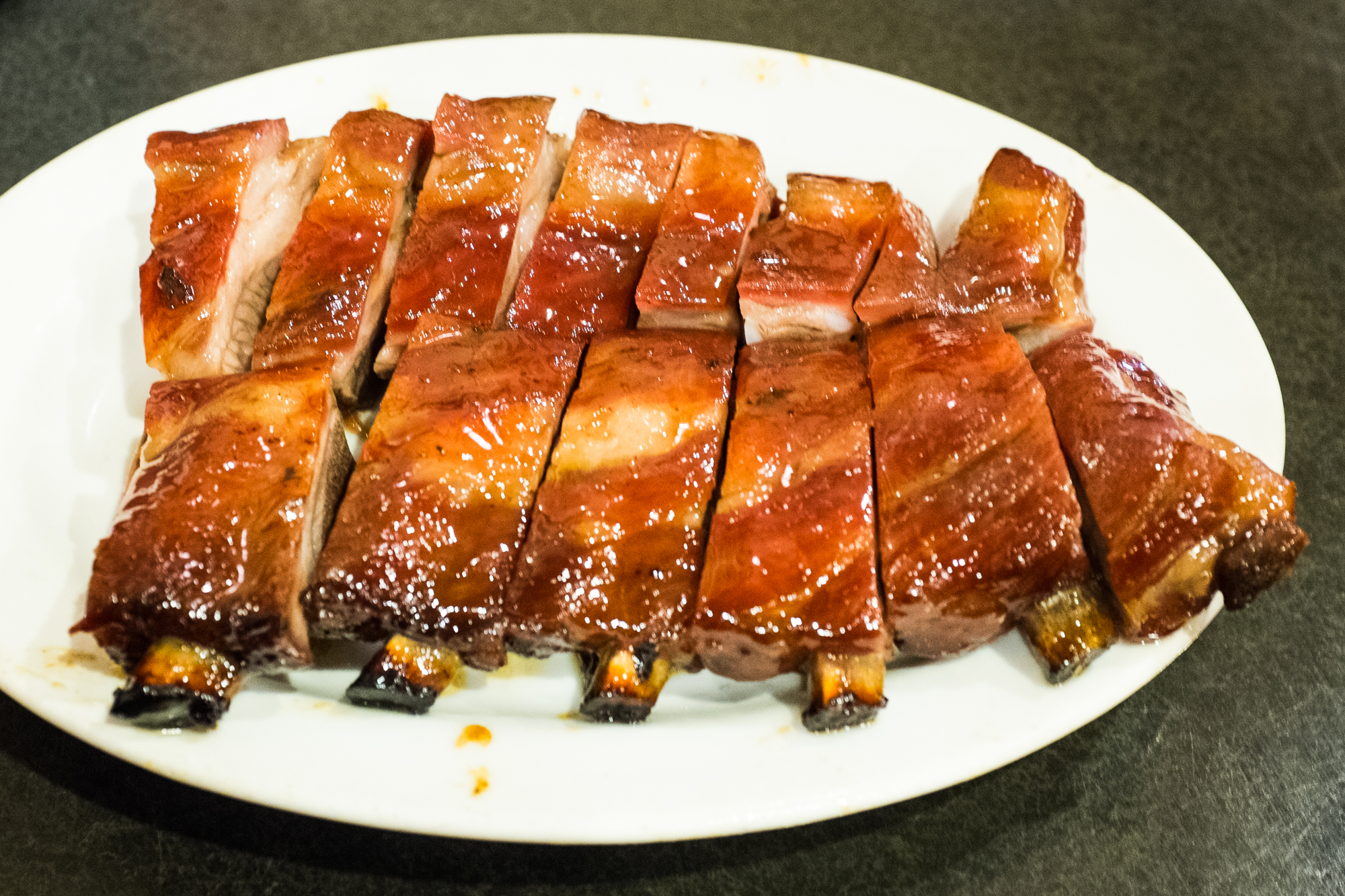 There are a few other cuts that use the word rib in them:

Riblets: Cut a rack of St. Louis or baby backs down the middle, length-ways and you get riblets.

Rib Tips: The rib tips are the remains of fabricating St. Louis ribs from spareribs. They contain cartilage and portions of the end "flap" of the cut (not to be confused with the diaphragm, also called the flap). You may occasionally see rib tips served as a single strip but more often than not they will be chopped into two inch square cubes.

Country ribs. These are not ribs, although certain portions of the cut contain rib bone. Country ribs are essentially economy pork chops fabricated from the chuck primal that lies to the anterior of the rib primal.

What to Look For and Where to Eat

There is no one right method to preparing ribs, no matter what the most ardent barbecuer will tell you. As long as they are cooked slowly enough to make them tender and render the fat, ribs can be delicious in a variety of ways. Here are some tips:

A full rack of baby back ribs is generally enough for one person. Because of the size of the bone and meat content, a half rack of St. Louis style ribs offers about the same amount of meat. Ribs are often sold by the rack, half rack, and quarter rack, or by the pound in barbecue restaurants.

The Fall-off the bone Fallacy

While a clever marketing hook used to describe tenderness, meat actually falling off of the bone is usually an indication of steamed or braised product. While it is not necessarily undesirable, it is not something you want from barbecue or a dry heat method of cooking. In these types of ribs, look for a little firmness to go with the tenderness — you should be able to see a clear imprint mark in the rib after you take a bite. This is one of the standards of competition barbecue judging. Also cooking the meat until it falls off the bone defeats the purpose of the natural handle afford by the rib bone.

Novices will often confuse the pink band that lies between the "bark" (the caramelized exterior) and the interior meat of barbecue as raw or under cooked meat. It is quite the opposite. This is known as the "smoke ring" and it's the result of gases from the cooking process interacting with liquids on the meat's surface — that's what brings out the bright pink color. You also see a similarly colored band on Chinese style ribs, but here it's the glaze dying the pork. In either case the pink hue is a desirable hallmark of the cooking process.

The peritoneum is a thin membrane that covers the inside face of both baby back. St. Louis and spare ribs. It is generally desirable to remove it as it can be tough and chewy. Removing it will allow the fat to render more easily and allow better smoke penetration if barbecuing.

On a properly trimmed St. Louis or baby back rib, you should see the meat constrict slightly as it cooks, revealing the tips of the rib bones.

The ribs on a St. Louis rack taper towards the posterior getting shorter and thicker. The front of the rack is often called the "short end" and the rear the "long end." Many barbecue restaurants will allow you to order one or the other. The short end tends to be meatier, with relatively flat bones, while the long end has thinner, rounder bones.

Editor markup for Pork Rib Gallery. This is only visible in the story editor.

Here are 23 pork ribs to try in NYC. Some are smoked, some are grilled, some are braised, and some are roasted. They are all delicious. Listed in alphabetical order:

Celebrity Chefs Flocked to This Food Nonprofit. But Employees Allege It Was Plagued by Inappropriate Behavior and Mismanagement.