Share All sharing options for: Batali, Lam, Sheraton, and Others Remember Gray's Papaya

Following yesterday's news about the closing of Gray's Papaya on Sixth Avenue, Eater asked a handful of chefs and writers for remembrances. Here's a look back:

Mario Batali, chef/restaurateur: When we were building Babbo, at the end of a long day at Po and then four to five hours on the Babbo construction site, at least twice a week I had a two dollar dinner around 3 a.m. celebrating the joyous snap of a pair of Papaya dogs with kraut and mustard.

Mimi Sheraton, former Times critic: Say it isn't so! It was my secret vice. I slipped in at all hours from mid-morning to mid-afternoon hoping I would not be spotted indulging at such a plebeian level and wondering if it was safer to face the window on 6th Ave. or the other on 8th St. Don' think there is another hot dog, mustard and kraut option now between me at Katz's.

Francis Lam, food writer and editor at Clarkson Potter: Fifty cents. Two dogs for a dollar. There was always such an elegance to it. I remember when my cousin first took me there, and I remember thinking, "There is so much awesome shit in this city." Things change, of course — it went up to .75 probably 10 years ago, and while I could never begrudge them their quarter, I realize now I stopped going when that happened. But still, it was there, it was a small thing that helped make New York New York, and walking by it you always knew where your eyes would land on the signs saying the dogs were better than filet mignon, the signs for the tropical drinks no one ever drank. The signs thanking Giuliani, the signs offering the Recession Special that was up so long it spanned at least three recessions, the signs wishing a newly-elected Barack Obama the best of luck. Even after I stopped eating the hot dogs, walking by Gray's Papaya always made me feel, for a second, how thrilled I was to be in my city.

Robert Simonson, cocktail writer: A sad day. In a perfect New York, every neighborhood would have a Gray's Papaya or Papaya King or some such place where a dog, fries and a neon drink to match the signage could be had for under $5. It's an essential public service. Like the local post office.

Doug Quint, proprietor of the Big Gay Ice Cream: One late and messy night, about 20 years ago and 20 minutes after last call, I was there huddled along the wall eating the first of my two dinner-or-breakfast Papaya dogs. Some folks were getting really vocal, but I ignored it. Suddenly a hand appeared and grabbed my back-up dog and sent it flying. Another dog hit me in the head. One helluva hot dog fight broke out! I didn't really care to push my way out, so I just finished my dog and went home covered in Gray's detritus. 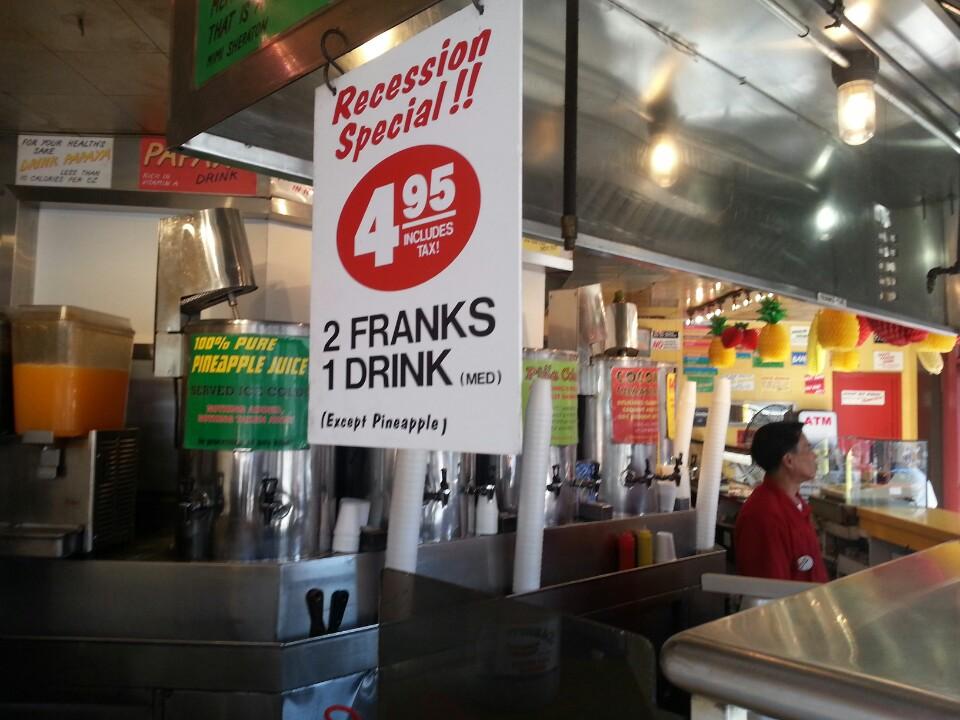 Guys, we should have seen this coming in 2011, when Gray's Papaya put up that dollar slice sign.

I thought I'd reached my breaking point when the news broke about John DeLucie's storming the King Cole Bar. But, I don't have much occasion to walk past the St. Regis and face the reality there. I do, however, walk past Gray's all the time. The dying of my NYC has now hit too close to home.

When I was a little girl and Oscar Mayer wieners lived in our freezer, I can't say I was all too impressed by hot dogs. Because of that at summer day-camp cookouts, when presented with the choice of a dog or burger, I almost always chose burger. And anyone who did otherwise was written off as a dud in my book. But then, one day, as we were leaving the movie theater on 86th and Third, my dad said he felt like a Papaya King dog. It was only a few blocks from our apartment, and yet, I'd never been. "Are the hot dogs really good?" I asked skeptically. "They're the best," he said. So we went inside, and, after waiting in line, got our dogs and our papaya juice (dad insisted this was part of the experience) and stood at the counter. He'd gotten two, even though I'd said I only wanted a taste. I took a bite and then proceeded to finish the rest of the dog. Dad, of course, had housed his in no time, and before I knew it, the wieners were all gone! I may not have wanted more of the juice (I still think it tastes a little like vomit), but I wished he'd gotten four dogs for the two of us. I may have asked for another round, if memory serves.

No matter how many hot dogs I've tried since — haute or humble — I've always loved the Papaya version (whether it's the original King or the offshoot, Gray's, which was established by a former King partner) best — the salty, blistered, oddly merguez-esque sausage and the sweet (like a Portuguese muffin, right?) bun. When I moved to the Village and spotted the Gray's Papaya on West Eighth Street, it was like a friendly beacon. Even if I wasn't stopping in, on nights that I stumbled back to my apartment late, I'd always feel safe, knowing I was almost home, as soon as I hit that corner.

It reminded me of my childhood — growing up on the Upper East Side and while there, idealizing the grown-up life I dreamed of living downtown. It also reminded me how much I love my hometown. Two blocks away, a restaurant could change hands every year — Aja Asian Bistro is now Umami Burger — and the head shops and shoe pushers could slowly get edged out of West Eighth Street by upscale restaurants like Neta, or shiny third wave coffee outposts like Stumptown, but places like Gray's and C.O. Bigelow, and even the hippie holdout Lifethyme Market, would always be there. That's what I believed, naively and hopefully. Not anymore.

I may go to Lifethyme tomorrow to buy a whole bunch of raw chocolate, various seeds and holistic tinctures I don't need just to keep the dream—and the NYC I love—alive. And maybe, this weekend, I'll see if my dad wants to hit Papaya King for a couple of dogs, each.

Levi Dalton, Eater wine editor: Before he died I was spending some time with Joe Dressner, the wine importer, and somehow we started talking about Seinfeld. "Oh, sure. Jerry Seinfeld." He said, and he smiled that big open mouth grin that he had. Joe had a big open mouth smile, and he would wag his tongue up and down for an exclamation point. "I run into him at the Gray's Papaya." Jerry Seinfeld at the Gray's Papaya, standing in line next to Joe Dressner. I chuckle over the thought of the two funniest Jews in the world finding each other in a hot dog palace of pork. Such a New York moment, I think.