A First Saucy Look at Emmett's

Share All sharing options for: A First Saucy Look at Emmett's

Looking very collegiate, a guy at the next table in a gray V-neck sweater leaned over and asked confidentially, "Are you from Chicago?" I admitted I'd lived in Northbrook for a few years when I was a kid. "Hmmm, North Shore," he said noncommittally.

"We're both from the North Shore, too," his female companion chimed in, "We went to the same high school. I think most of the people in the room are Chicagoans." Dispensing with the chit-chat, the guy then asked me what he'd leaned over for in the first place: "What do you think of it?" He offered me a taste of his humongous pie.

"I like it pretty good," I replied, chewing thoughtfully, "but I think it's a little too soupy." His girlfriend perked up again, "Oh, you mean the cheese? Yeah, there's too much cheese," she lamented. "But I liked it anyway."

"The crust has the perfect texture, really dry and hard," the dude said, his eyes almost misty as he looked out the window as the snow fell on Macdougal Street. "But I feel like it's not all that flavorful. It's not as good as Lou Malnati's – there's something missing."
We broke off the conversation because my own pie, a ten-inch, eight-slice beauty, was hovering around the table like a helicopter. As it touched down, the waitress placed a tiny hourglass egg timer beside it. "I can't cut the thing till the sands run out," she said poeticially. So go the sands of our lives, I thought.

Emmett's is not the first place in town to try to duplicate Chicago's fabled deep-dish pies. For years we've had a small collection of Uno Pizzerias, which have provided a quasi-authentic rendition. In fact, at least 40 pizzerias in the five boroughs offer some semblance of Chicago pizza, often by the slice. (Manhattan's Bravo and Little Italy chains both do.)

And Staten Island pizzerias such as Brother's in Richmond Hill have been known to turn out Chicago pies — but with the purpose, one suspects, of proving how much better our own styles of pizza are. Jon Stewart on The Daily Show made the same point recently, excoriating Chicago's output: "Deep dish pizza is not only not better than pizza, it's not pizza!" It frankly made him sound a little pizza-insecure. 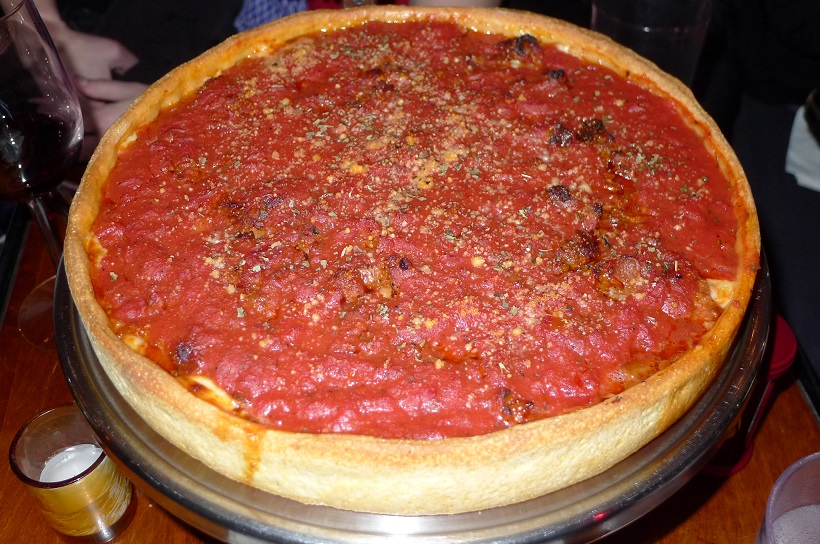 The crust of Emmett's pie is more stiff dough bucket than crust, shaped like a round baking pan with a half-inch thickness throughout, and sides that measure a whopping two inches in vertical loft. Using geometry, the volume of the crust on my 10-inch pie — which arrived nearly overflowing — can be easily calculated at slightly more than 47 cubic inches. That's over three cups of filling, which, to the New Yorker accustomed to just a coating of sauce, seems monstrous.

About half of that filling is red sauce that tastes more like Italian-American spaghetti sauce than the kind of plainish tomato puree that's likely to end up on pies here. The other half of the volume is a floe of white cheese positioned just over the crust that oozes when the waitress, rather laboriously, cuts a slice. Let's just say it's not the world's best cheese. In fact it bears a striking resemblance to the cheese you usually find on a regular Brooklyn neighborhood slice, just the slightest bit sour and a little too rubbery.

There's a choice of several toppings, including three meats (fennel pork sausage, pepperoni, and — odd man out — bacon) and vegetable matter, too (mushrooms, onions, green pepper). These are not toppings in the usual sense, since they don't ride on top of the tomato sauce, but are submerged inside it, cooked long enough that they merge with the sauce, and become practically undetectable as you munch your way through the pie. This is not a bad thing, except to the extent that it makes most topping combinations taste about the same. Really, Emmett's offers only one pie in four different sizes, no matter what toppings you choose. And, even though extra cheese and extra sauce are offered options, where would they put the extra cheese and extra sauce on an already overflowing pie?

I'd have to say I liked my pie ($33, with bacon, sausage, onions, mushroom, and pepperoni) quite a lot, and it was nearly as good reheated the next day. Though reheating takes about half an hour in a conventional oven. This is not a good thing at breakfast, when most leftover pizza is consumed. 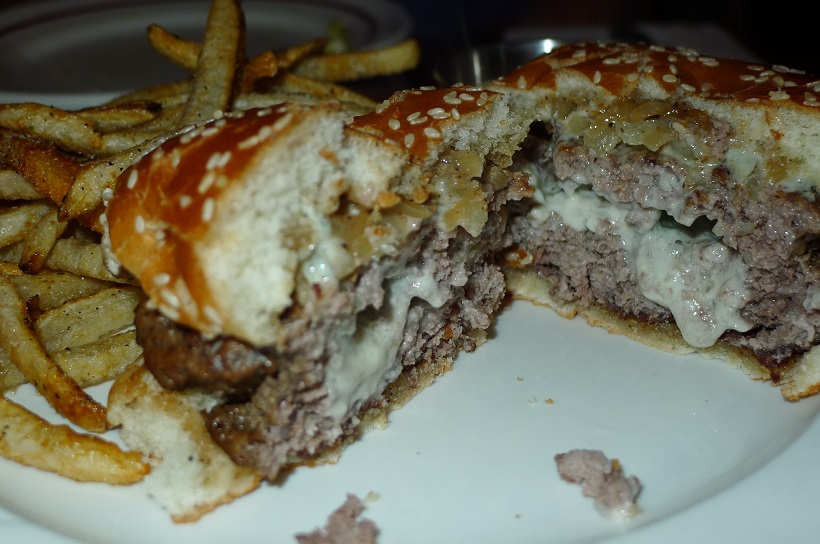 Emmett's offers little else besides Chicago pizzas. There's a choice of four hamburgers and four salads. My date and I tried the most interesting sounding hamburger — the one with blue cheese inside ($14), recalling April Bloomfield's burger at Spotted Pig. "How do you want it?" The waitress asked. Normally, I would have said medium rare, but upon reflection, I replied, "Well, shouldn't it be at least medium? You want the cheese to melt inside, rather than just sit cold in a lump of raw meat, right?" She allowed as how I was right. My companion believed the patties had been frozen, not only due to the texture of the cooked meat, but as a kitchen expediency where such stuffed burgers are concerned. 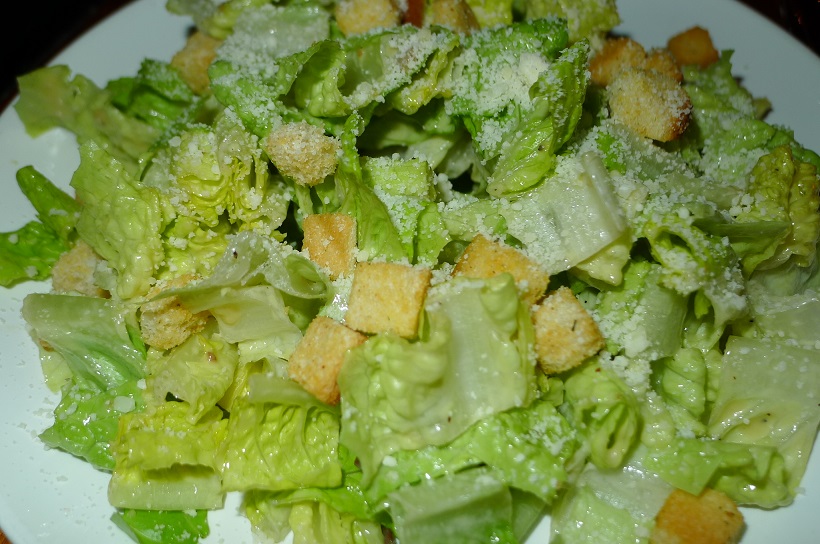 The green matter? The salads were adequate, too, though our pared-down Caesar ($8) was not the kind of egg-yolky, anchovy-draped toss I often dream about. 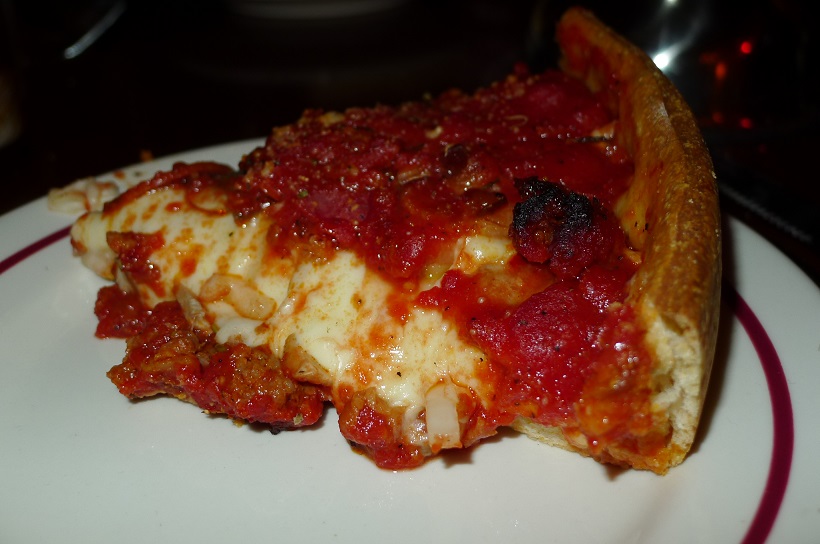 The verdict? Definitely worth experiencing for the pizza, and every New York pizza lover should try this stab at Chicago authenticity at least once. But don't ever go to a pizzeria for a burger.