While downtown neighborhoods like the East and West Village are rapidly losing their cheap eats options, Chinatown seems to be retaining its own, and gaining some. In a small walk-up space with five or six seats Hua Ji Pork Chop Fast Food (7 Allen Street, 212-219-9876) specializes almost exclusively in compact-but-dense meals based on bowls of rice with copious protein toppings, 75 choices at only $5.50 each. While nominally Fujianese (each meal comes with a big wad of pickled mustard greens), the menu is aimed at satisfying a broad range of southern Chinese tastes. 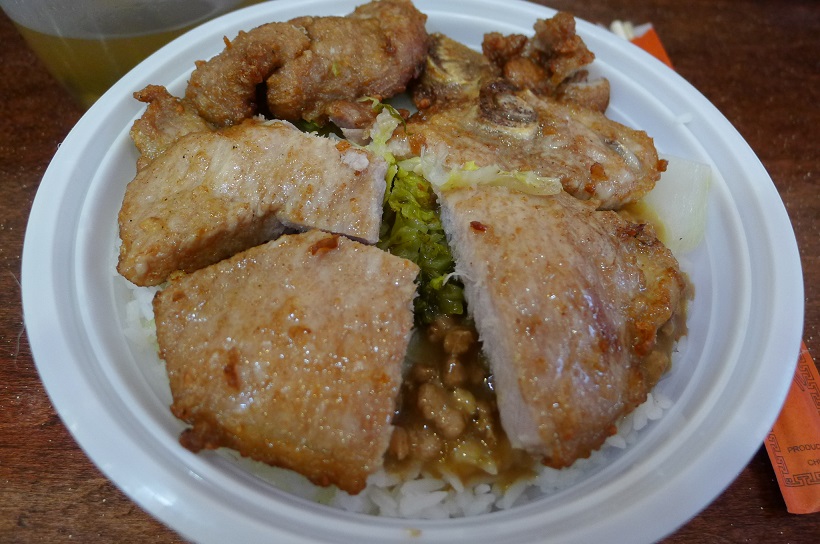 The pork chop over rice alluded to in the restaurant's name is particularly admirable, two nicely browned chops with tender, crusty, and gnarly bits lubricated with a ground-pork sauce. For cold evenings, curry chicken over rice delivers a nice spicy wallop, while shrimp with egg sauce over rice leaves you with a mellow feeling in your stomach. There are a few fried-rice and noodle options, too, but stick with the over-rice. Each meal also comes with the type of thin Fujianese soup that ramps up the volume of the meal, but adds little in the way of culinary delight. Think of it as an unamusing amuse. Sometimes, you have to ask for the free soup to get it. 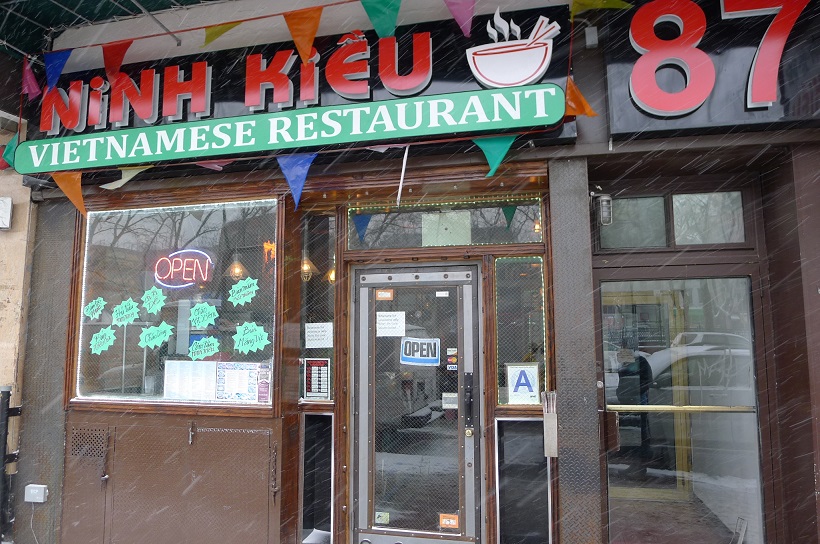 Despite a plethora of Vietnamese restaurants in Chinatown (15 by my estimate), most are not very memorable. My current favorite is newcomer Ninh Kieu (87 Chrystie Street, 212-226-2817), named after a district in the Mekong Delta on the Bassac River in the southernmost region of the country, where most New York Vietnamese immigrants come from. Food of the region features Cambodian and Chinese flourishes, and pork is preferred over the beef that's a legacy of the French (and American) colonial era. That said, Ninh Kieu's pho ($6 to $7.50, in 19 varieties) verges on the spectacular. Among meaty add-ins, the homemade beef balls are best — bigger, grainier, and herbier than usual. 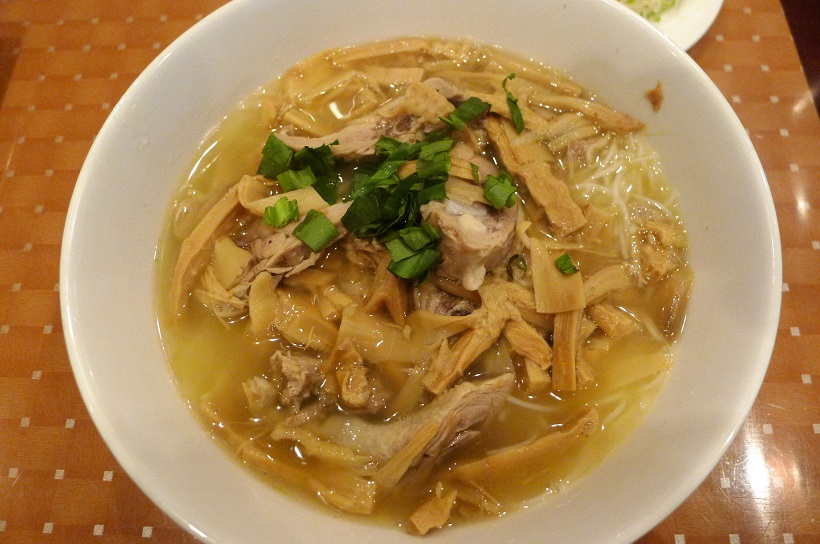 But other soups excel, too. Look for them on the specials card which you may have to hunt for on other tables. Bun mang vit is a creamy yellow potage rife with pale duck slices and buff-colored bamboo shoots. The duck is not the kind hanging in the window of charcuterie shops, but canvasback stewed into the broth starting out raw, and the flavor of the broth is probably duckier than you've ever experienced before. 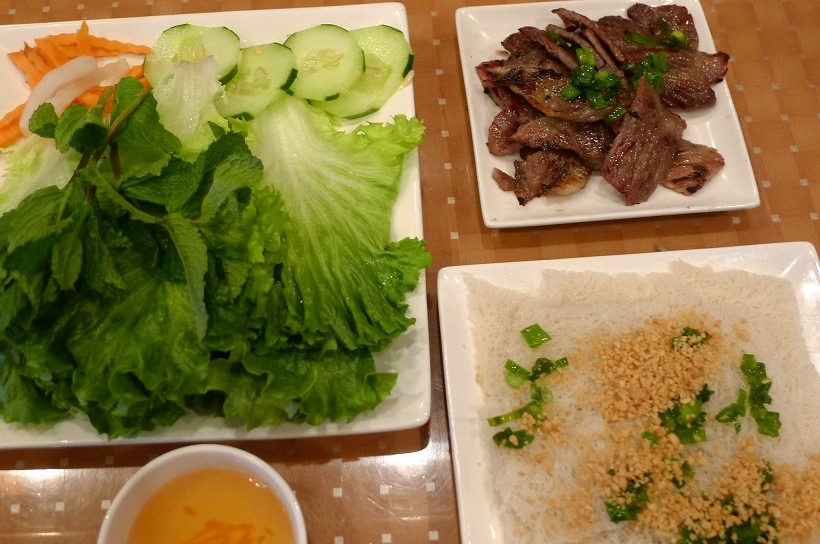 Specialty of the house are banh hois featuring little swatches of fine rice noodle, to be wrapped up with grilled meats in lettuce along with fresh mint, sprouts, and pickled veggies, offered with a novel raw-ginger dipping sauce. Priced at $10.50 to $14.50, the servings are massive, and easily shareable by two or three. 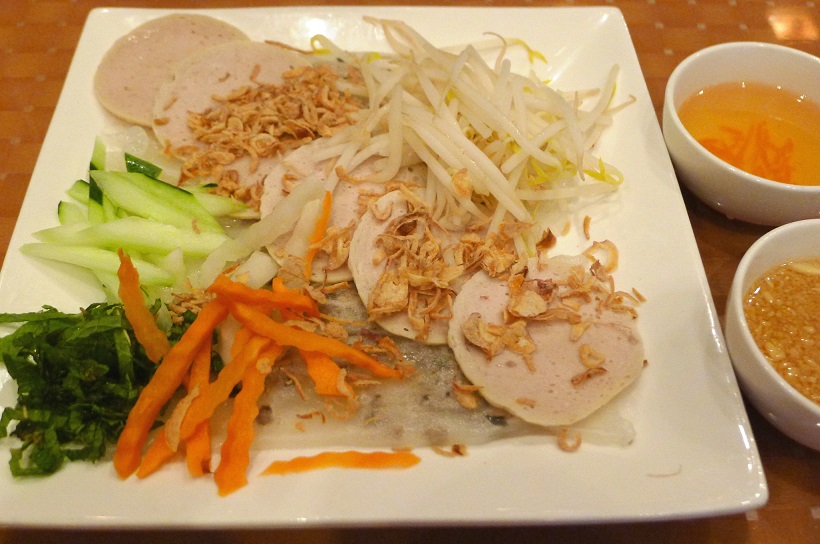 Another Ninh Kieu delight are the transparent rice-starch crepes studded with ground pork and offered on a platter strewn with pork pate and a half-dozen other ingredients (banh cuon cha lua, $6.50). Superb textures and flavors! 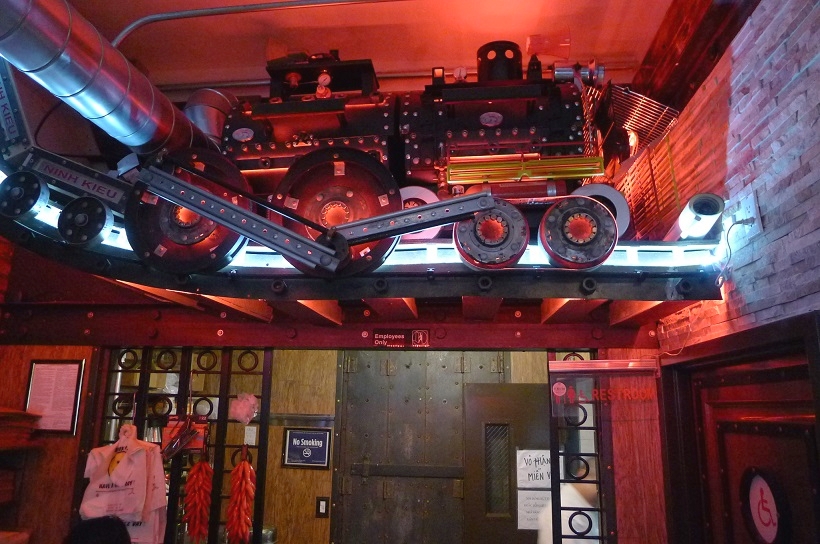 The décor of Ninh Kieu is modern, with exposed brick walls and a deep, dark, quiet interior that could be perfect for dates. Unaccountably, railroad tracks run across the ceiling, with a large red-lit locomotive poised over by the kitchen as if it might crash onto your head. Not sure what it means, but the choo choo is for sure a conversation-starter. UPDATE: Sadly, Ninh Kieu closed in early April. SECOND UPDATE: Happily, the premises has re-opened as Pho Vietnam 87. 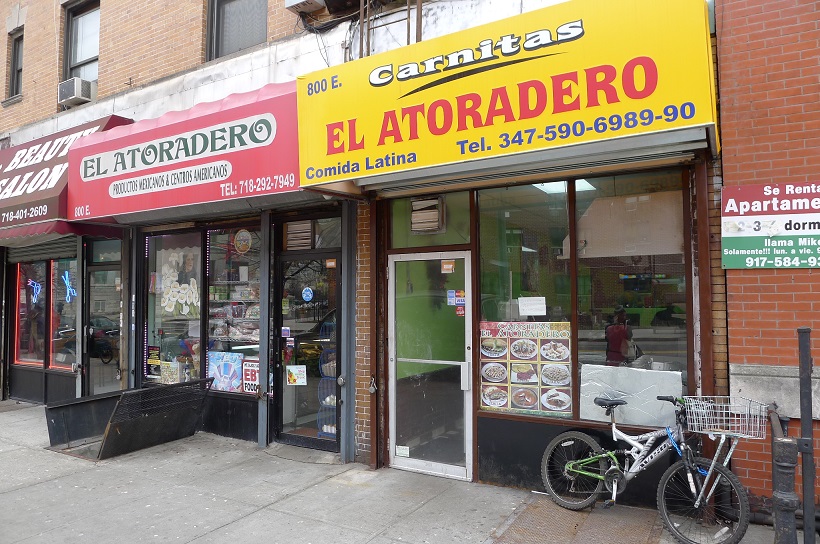 At least since 2011, food writers and other Mexican food aficionados have been making the trek on the 6 train (or the 2 or 5, if you like to go express) up to Mott Haven, the Bronx to El Atoradero 800 East 149th St, Bronx, 347-590-6989), where bodega owner Lina Chavez has been boiling up some very soulful pork carnitas in a giant cauldron with help from some neighborhood women. 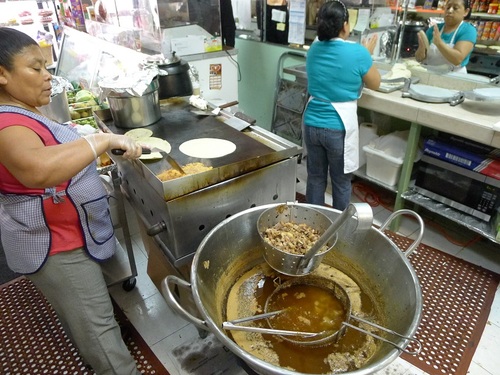 While Chavez is Mexican, her assistants are often Dominican, Salvadoran, and Guatemalan, and their influence showed in the idiosyncratic menu of the deli, where the signature dish was picaditas — hand-formed masa vessels shaped like shoes with a rim formed around the edge the better to hold the carnitas, crema, and queso seco that threaten to overflow the bounds of their masa container. These carnitas are not the little red desiccated tidbits you usually encounter in bodegas, but outsize opulent wads of fatty pork laden with piggy savor. 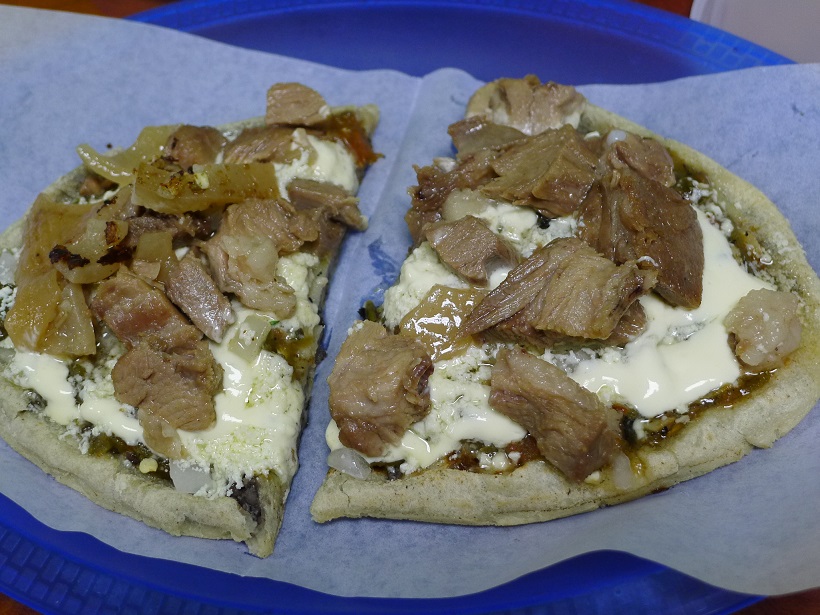 Now, right next door to her bodega, Chavez has finally opened the long-gestating cafe Carnitas El Atoradero (800 E 149th St, Bronx, 347-590-6989). But don't call it a taqueria, because the menu's focus is picaditas, quesadillas, sopes, huaraches, and other hand-formed masa vehicles. 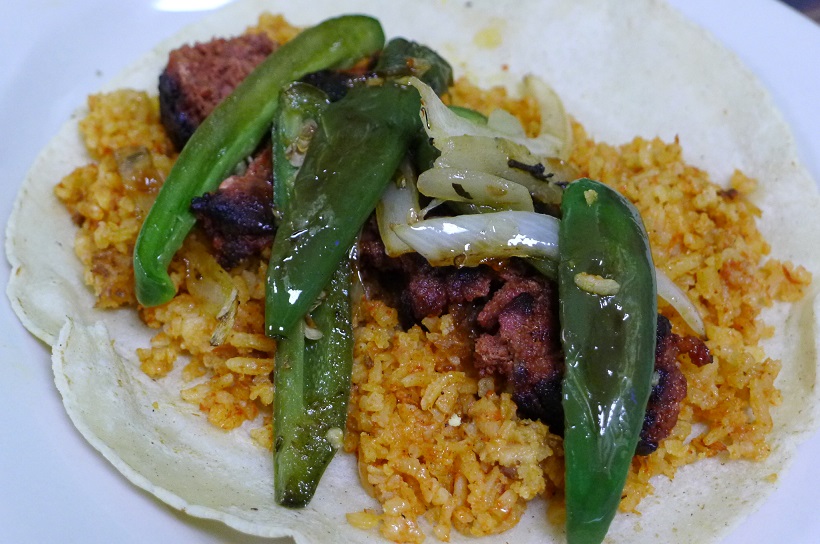 But the picaditas should be your first order, either with beans between the masa layers or without. Salvadoran pupusas are also available, as are the elusive tacos placeros ("market tacos"), ragged homemade tortillas stuffed with rice, fiery sautéed peppers, and your choice of boiled egg, sausage, or razor-thin steak, breaded or not. The yellow rice is moist, not dry, and if you haven't tried a taco placeros, you're in for a treat, especially if you ladle on one of Chavez's three homemade salsas. 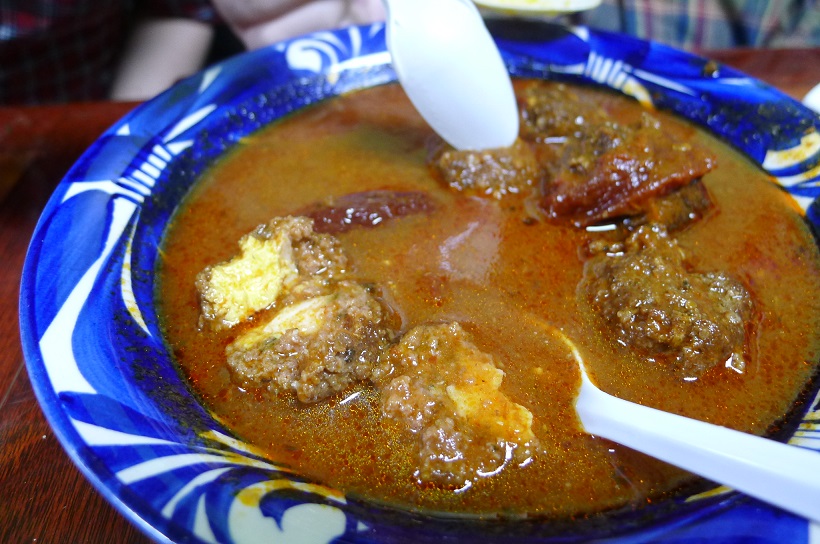 Daily entrée specials can be read off the chalkboard out front. On a recent visit, some friends and I enjoyed albondigas (meat balls stuffed with egg yolk) in copious quantities of a spicy chipotle gravy, almost making us wish we'd had a plate of overcooked spaghetti; and chicken in one of the richest mole poblanos you've ever tasted, and not a shade sweet, either, almost more like Oaxacan mole negro than mole poblano, and gloriously unctuous. Carnitas El Atoradero easily qualifies as one of the best, most innovative and interesting Mexican restaurants in town and you should get your ass up there as soon as possible.
· All Posts by Sietsema [~ENY~]