Share All sharing options for: An Early Look at Amanda Freitag's Empire Diner

Revamping the type of diner housed in a jazzy building resembling a railroad dining car has been a preoccupation with New York restaurateurs for more than a decade. Williamsburg has been the hotbed of this activity, where we've seen diners dubbed Diner (reimagined in 1999 and still going strong), Miss Williamsburg (destroyed by fire in 2009), and Café de la Esquina (formerly Wythe Diner and then Relish). Most recently chef Amanda Freitag — renowned for her work at Cesca and the Harrison, but these days more likely to be seen on Chopped or Iron Chef — has commandeered the Empire Diner, a landmark on Chelsea's 10th Avenue that has been updated several times already. Her intention is to reconceive the standard Greek diner menu as it's come down to us from the 40s and 50s. The Freitagian approach is playful, and the food often intriguing. 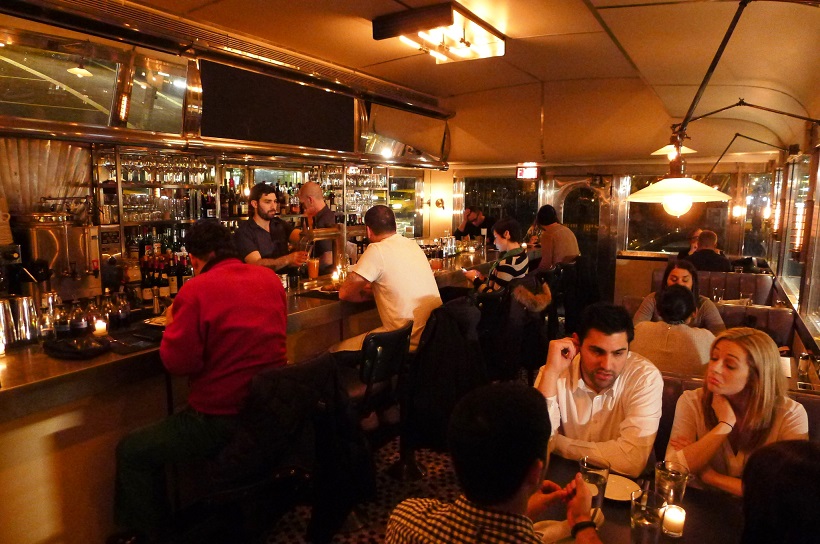 Empire Diner is a flamboyant structure, its exterior so streamlined and shiny it threatens to take off and vault over the nearby High Line. It was built in the Art Moderne style by the Fodero Dining Car Company of Newark, New Jersey in 1946. Freitag's timing couldn't be more perfect, as the neighborhood throngs with tourists and art lovers, and new condos begin to shoot skyward in its vicinity. The lovingly preserved main dining room retains its original stainless steel interior, black-and-white ceramic hexagonal floor tile, and conventional mix of tables, booths, and counter seating. The famous piano at one end of the room, a feature of a previous tenant that sometimes caused late-night patrons to sit down and belt out an impromptu song, has been replaced with storage shelves for stemware. Does a greasy spoon need wine glasses? These days it does. 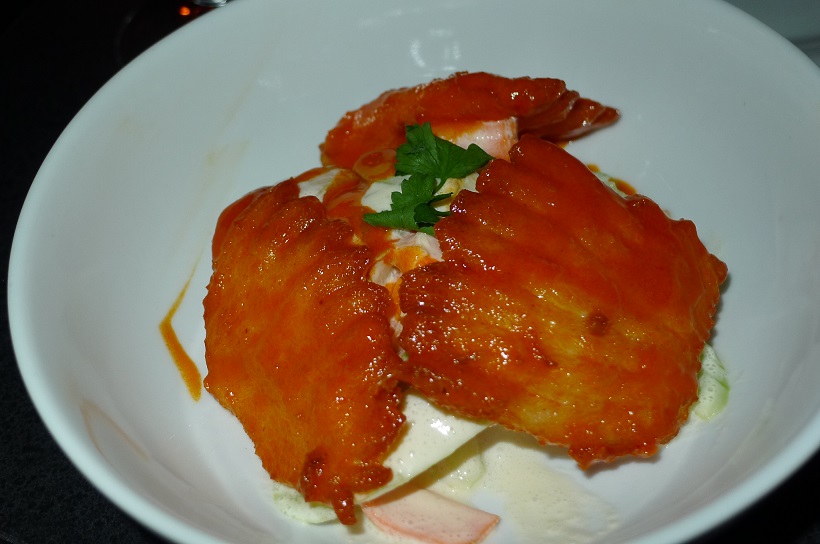 I was eager to see how Freitag would tweak the diner menu. On a pair of very early visits, I thoroughly enjoyed the Buffalo skate wing ($11), substituting three thin and crinkly swatches of ray — well-saturated with Franks' Hot Sauce — for the usual avian appendages, depositing them on a compact salad of carrot and celery ribbons with a dressing that had little, if any, detectable blue cheese. A very nice interplay of textures and flavors. So, too, did the mac and cheese represent a startling restructuring of a too-familiar dish: rice-shaped orzo replaced elbows, the béchamel ran white with parmesan, and broccoli flowerets had been tossed in, a not-unpleasant addition. Indeed, if one were to characterize Freitag's approach to the classic diner bill of fare in two words, it would be "add vegetables." 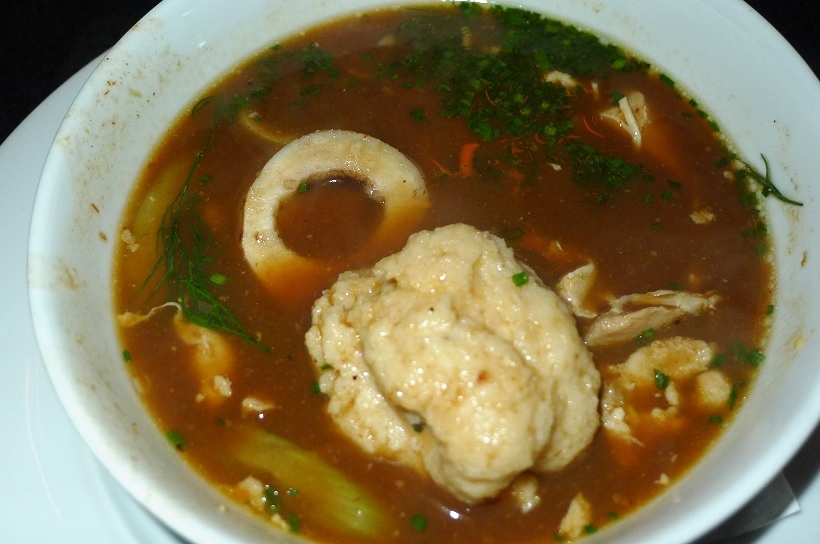 Some modern notions run amok. With real muck. The addition of a small marrow bone to matzoh ball soup ($8) isn't really an improvement, and the brown broth in the bowl — I suspect it's the same broth used in the restaurant's French onion soup — is somewhat unappetizing next to the bulbous blandness of the ball. You'll have trouble actually extracting the marrow from the small-bore bone with the ice cream spoon provided (hint: use the stem end of the spoon), and then what do you spread it on in this bread-challenged era? 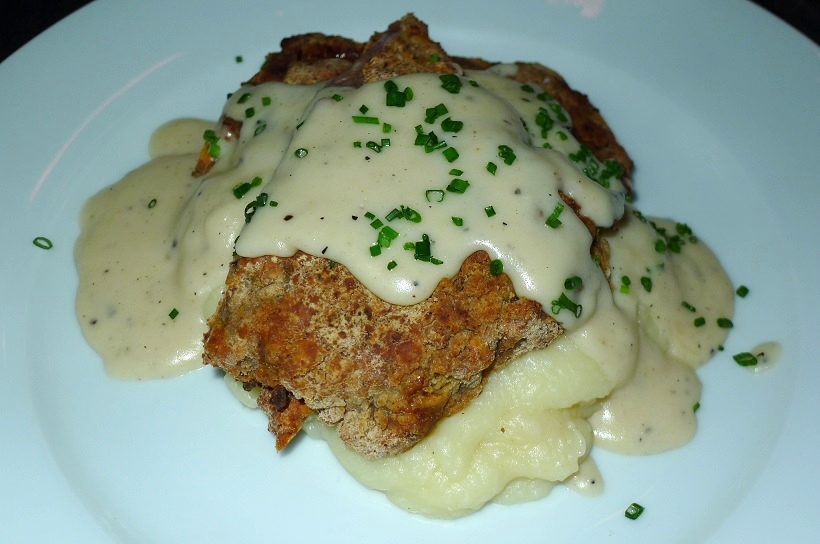 A high point of the menu has been the café's daily Green Plate Special (price varies), substituted for the conventional blue plate special offered by previous tenants. There was real excitement in the chicken fried steak, made with a fine-quality New York strip split longitudinally. Pounding was unnecessary. I cynically thought that, at $21, only half a steak would be provided, but the entire steak was included in two parts, constituting a massive quantity of meat, with perfectly executed white gravy. Here is a gal who knows Texas, I thought. 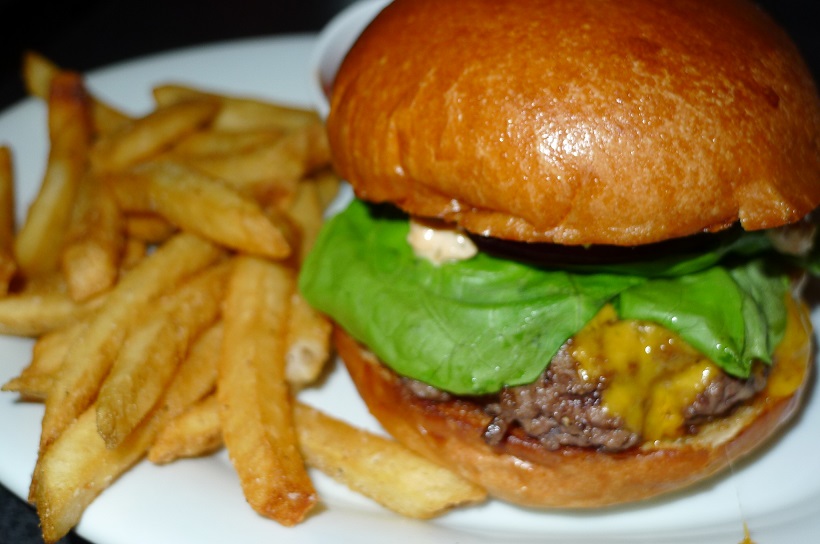 As befits a revamped diner, the hamburger is great, ensconced in a brioche bun (what else?), with fries that are only OK, but still a thousand times better than diner fries. Didn't much like the trout almondine — filets a bit small and the entire plate too greasy — but really grooved on the section of vegetable sides, which many tables seemed to be eating as apps. 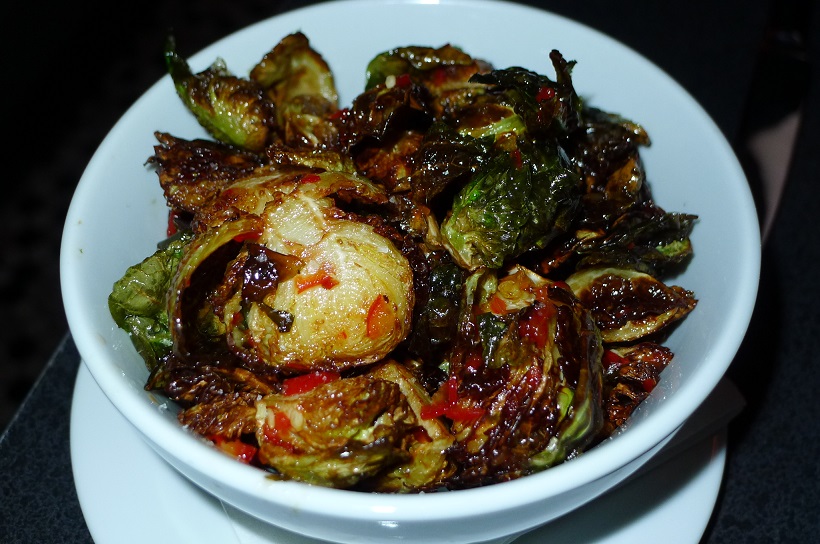 At the Harrison, Freitag singlehandedly reinvented Brussels sprouts for a new age, and here, rather than cooking them with lardons, she sends them in a sweet direction with chili jam. The dish is colorful and zingy and, at $6, the serving is generous. 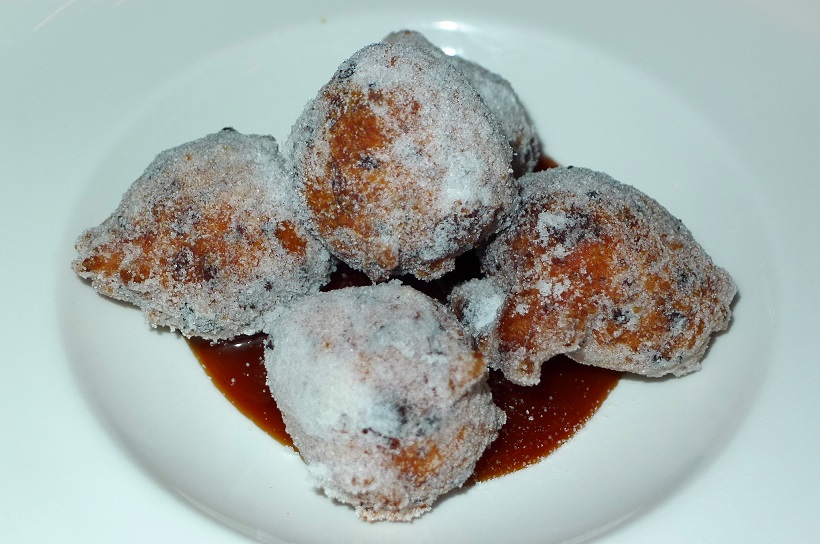 Another piece of advice: if, after such a rich meal, you still crave dessert, go for the sugar-encrusted donut holes with salty caramel sauce. They arrive hot out of the fat.