A First (and a Second) Look at Fung Tu

Share All sharing options for: A First (and a Second) Look at Fung Tu

[Fung Tu by Krieger]
The food at Fung Tu can be perplexing. Take the "stir fried celtuce with soy-anise marinated egg" ($13). The dish certainly makes a pretty picture on the plate, a squishy brown egg poised on a nest of green vegetable seemingly shaved in a single long strip that shines like a Christmas ribbon. And we're exceedingly grateful to be introduced to celtuce, a fascinating variant of lettuce that's nearly all stem. But why make a dish so low on flavor? And don't say because the celtuce is supposed to sing: It doesn't, and neither does the egg, so sparingly spiced you can barely distinguish it from a plain boiled egg. "What this needs is a squirt of fish sauce, or some ginger and black vinegar," a friend visiting from Beijing groused. But maybe eschewing standard Asian flavoring schemes is the whole point of Fung Tu. 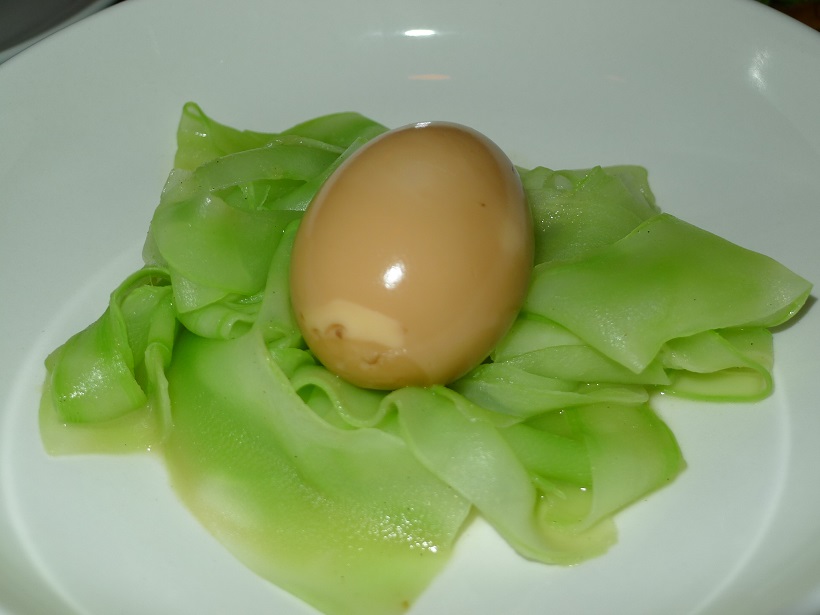 [The egg in question by Robert Sietsema]

Hunkered among galleries, Chinese fraternal associations, and restaurant equipment supply stores on the last darkling block of Orchard north of Canal Street, the dining room is deep and narrow, decorated with wallpaper featuring stylized brown leaves on one side and whitewashed bricks on the other. The atmosphere is spare and post-modern, and the booths and tables are comfortable to a point, though the backs and bottoms are made of hard wood, with the type of thin and penurious cushions on the seats Protestants put on pews so nobody gets too comfortable. 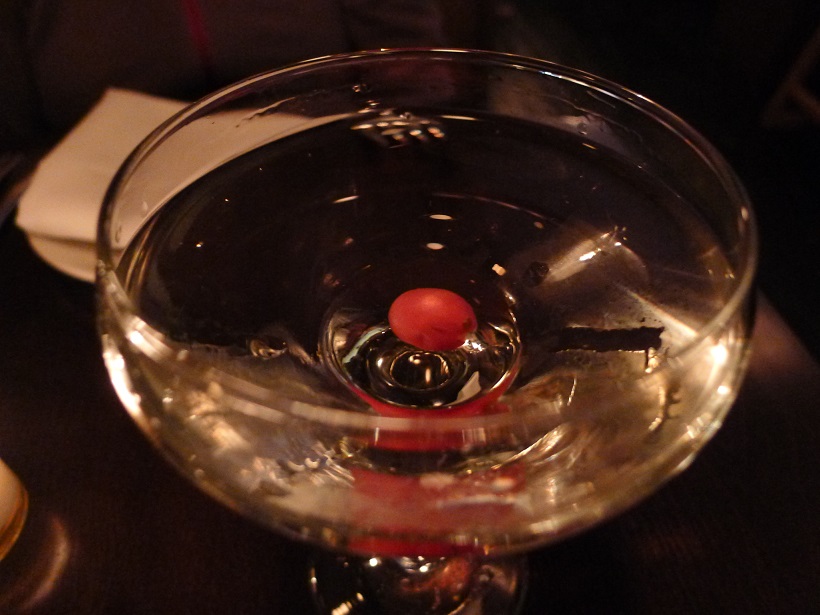 [The Gibson by Robert Sietsema]
Fung Tu has a nicely balanced beverage program that includes a small but diverse collection of international and domestic beers, an expensive wine list with most of the action in the $45 to $70 range, and some nifty strong cocktails, among them a sweetish Gibson flavored with a pickled jujube, which is a small red Asian date. 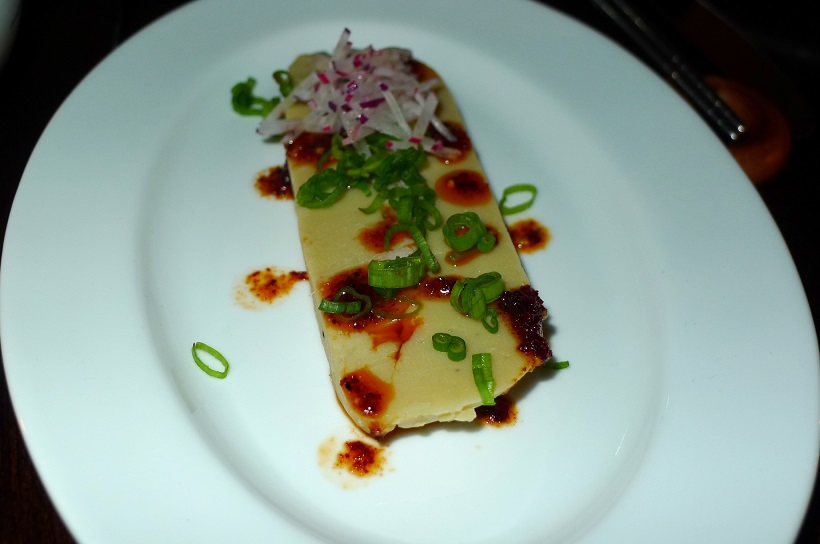 [Bean curd terrine by Robert Sietsema]
A project uniting the talents of chef Jonathan Wu and restaurateurs Wilson Tang and John Wells, Fung Tu describes its menu as Chinese-American. Which in not to say it serves the venerable antique cuisine that brought us chop suey and egg foo young, which began with the Gold Rush and died sometime around 1977. This is creative food by a chef who occasionally diddles with Chinese-American standards, seemingly for the purpose of playing with our expectations. Take the broad bean curd terrine ($13). Though pleasantly zapped with the flavors of bacon, pickled mustard greens, and chili oil, the terrine turns out to be a gritty white plank made from white broad beans into a sort of very firm hummus, a punning substitution for the expected tofu. 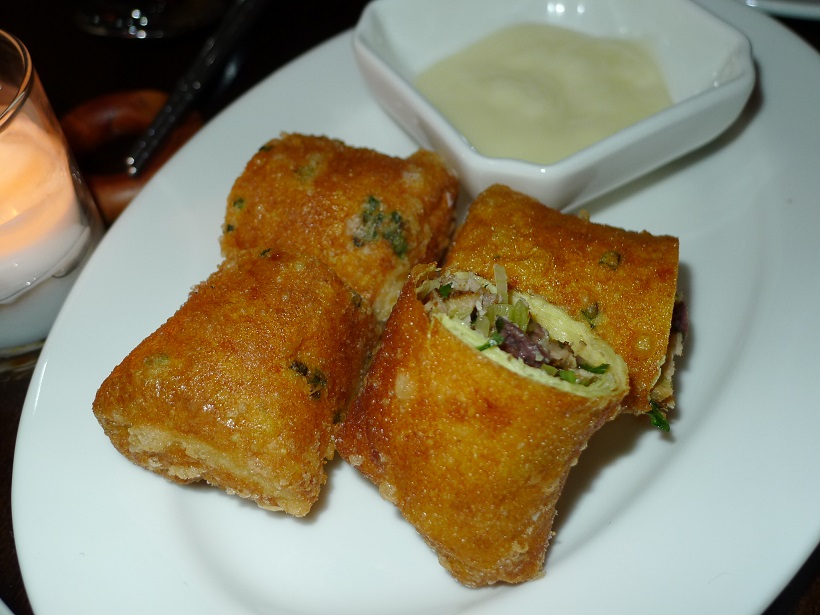 [The egg roll by Robert Sietsema]
Indeed, the chef has done his homework, and the menu is filled with interesting ingredients and startling juxtapositions. And some dishes work, including an updated egg roll that features an imperially thin wrapper stuffed with tidbits of pork belly, green picholine olives, and other slippery stuff, making the roll — which might have been as heavy and sodden as its carryout prototype — light as a feather. But at $13 for a smallish cylinder cut in four, it seems too expensive. 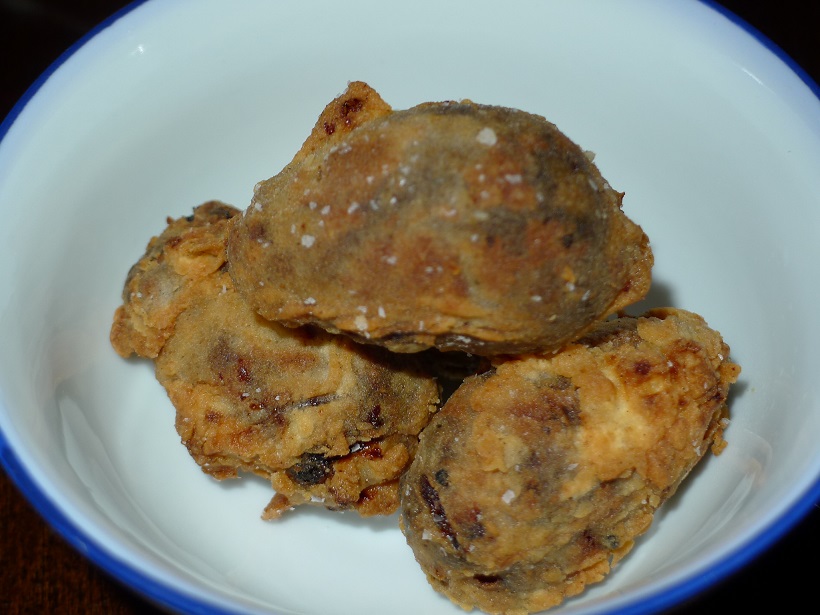 [Dates by Robert Sietsema]
On two visits, I managed to try most of the menu's 22 dishes. The bar snack of peanuts, dill, and Chinese beef jerky ($6) was delicious, and so were the fluffy and smoky duck-stuffed dates, looking like miniature box turtles. But the small plate of bok choy with house-made shrimp paste ($5) featured the raw leaf with a dipping sauce that was entirely flavorless, seemingly made of fresh minced shrimp deposited in an unspiced tomato puree. Why not create a sauce that one-ups the piquant
shrimp sauces of Southeast Asia, rather than blanding them down? 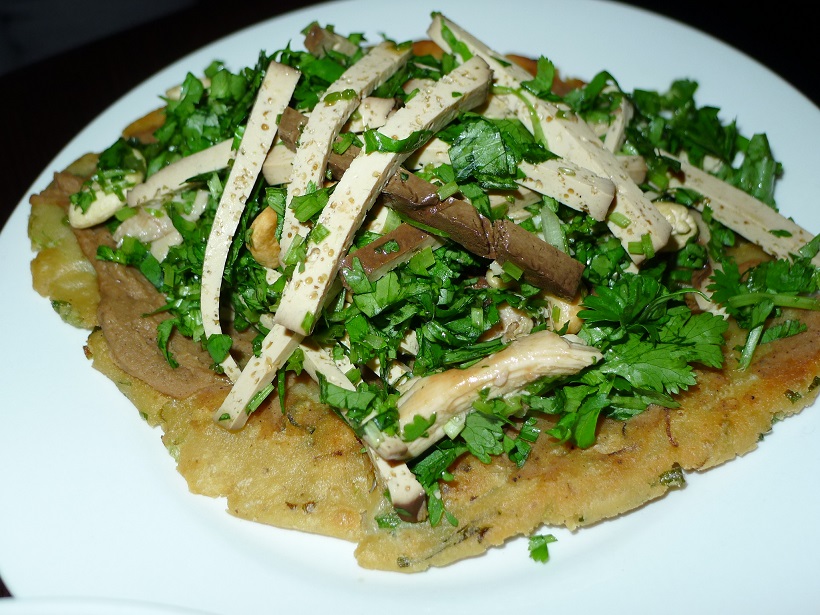 [Smoked chicken salad by Robert Sietsema]
The smoked chicken and cilantro salad ($12) was all green herb with no dressing, and the small quantity of smoked chicken could have fit in a soup spoon. Railroad ties of tempeh were carefully arranged across the top, making for an already-incongruous assemblage that was then deposited on a masa pancake, which had more flavor to it than all the other ingredients combined. The whole thing was like eating a grass sandwich. 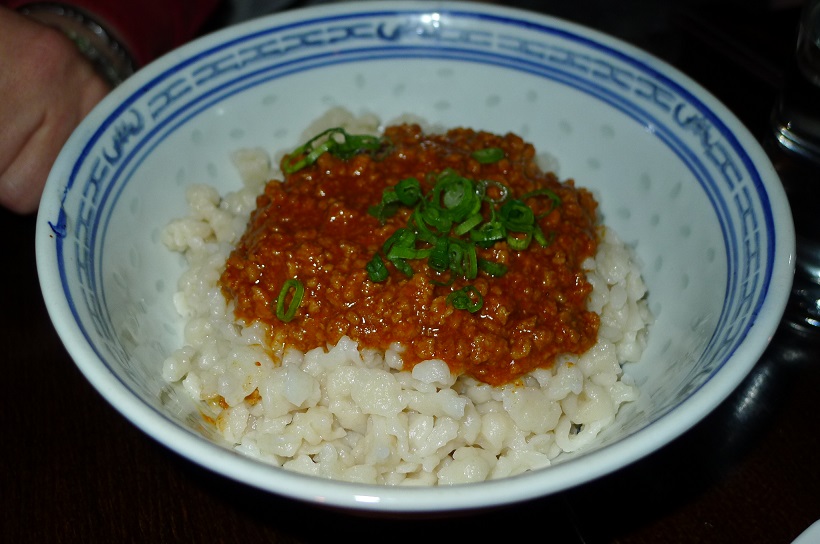 [Dumpling knots by Robert Sietsema]
The biggest disappointments on the menu were the large plates, which were mainly in the $20 to $30 range, and often represented rather puny servings. "Dumpling knots with Sichuan Pork Sauce" is a faint stab at dan dan noodles using spaetzle rather than mian, not a bad idea but the sauce might be pink pablum fed to a baby. So too does "wheat noodles with pumpkin seed sauce, winter squash, and smoked trout" read much better than its tastes. It reminded me of something I ate at Bushwick's King Noodle, vaguely like Alfredo with way too little sauce. 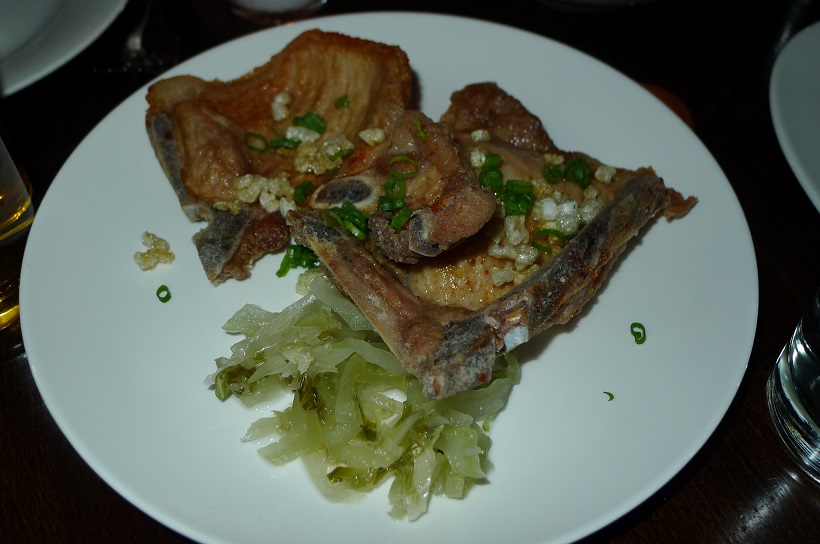 [Pork chops by Robert Sietsema]
The fried pork chops with pickled mustard were far better, a nicely chewy and spicy plate of food that made you wonder, why didn't the other entrees have this oomph!

There are promising concepts on the menu — and a wealth of interesting and even revolutionary ingredients — but the chef needs to ramp up the flavors rather than ramping them down.
Fung Tu
22 Orchard St., Chinatown
212-219-8785
All Coverage of Fung Tu on Eater