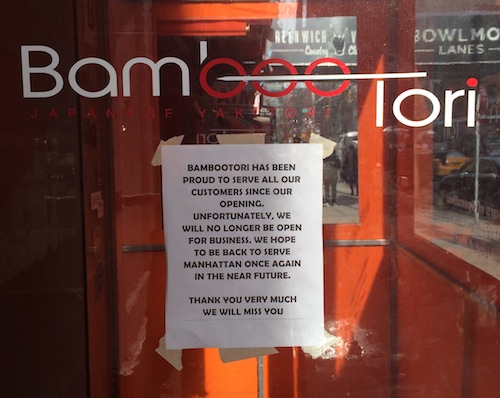 2) Union Square: Bamboo Tori, a Japanese yakitori spot on University Place has shuttered, only a week after attempting a menu revamp. Now a note on the door reads: "Unfortunately, we will no longer be open for business. We hope to be back to serve Manhattan again in the near future."

3) Lower East Side: Papa Dish, the dollar slice joint that opened in the former Dessert Works space has closed after less than four months in business. Bowery Boogie notes that this is somewhat unsurprising, since the downtown outpost of the beloved Rizzo's Fine Pizza opened across the street at around the same time. [BB]

4) East Village: Pan-Asian restaurant Wacky Wok is no longer, according to EV Grieve. The owner says the restaurant, which was out on Avenue D, wasn't making money, and "needed more walk-by traffic." [EVG]

5) East Village: Maria's Cafe, a tiny little takeout window on Avenue C has closed its current location. EV Grieve hears that the longtime purveyor of "inexpensive food and strong coffee" is moving to a new location on Broadway near East 10th Street. [EVG] 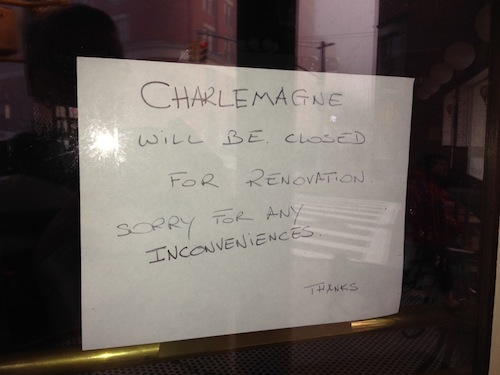 Also of note: Charlemagne, an "American brasserie" in the West Village with some very French leanings is currently "closed for renovations" after less than a year in business. A reader suspects it's done for good. The restaurant's OpenTable account is down, no one at the restaurant could be reached for details.
· All Coverage of the Shutter [~ENY~]