Peter Mayer, the president of Overlook Press and former CEO of Penguin, was a regular at Milady's in Soho until it closed last week. Eater reached out to the publishing legend for his thoughts on its closure: 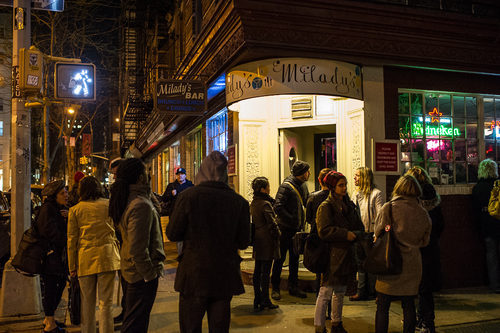 Peter Mayer: You'll be pleased to know that I was one of several thousand people, including other Overlookers in closing Milady's on Sunday night. It was disappointing that Milady's had lost its lease and I hope it is not replaced by some chic bar or restaurant like all the other chic bars and restaurants in Soho or, another clothing store selling people clothing they hardly need as they already own too much clothing. What can I say?

Yes, I was a regular patron of Milady's, as all of us at Overlook have been. We discovered not only that we are a bibulous lot, but that the noisy neighborhood style at the corner of Thompson and Prince was a good place to combine beer and spirits with literature and publishing talk. The food was also surprisingly good, quite a step above normal bar comfort food, and I may say we all got to know the waitresses who were very funny and full of the best lip. My heart goes whack whack whack when I think of Cameron and Simone who are now departing to the wilds of Hoboken. Well, Olivia and Francesca and Julia and I were there, day and night to be remembered. In the future people ask, "Where were you the night Milady's closed?"
· All Coverage of Milady's [~ENY~]