A First Look at Han Dynasty in the East Village

Share All sharing options for: A First Look at Han Dynasty in the East Village

I walked into the East Village's new Han Dynasty (still in soft opening phase) and asked the guy who led my friends and me to our seats, "What kind of Chinese restaurant is this?" His unhesitating reply was, "Sichuan," which turned out to be only partly true.

Named after a 400-year period around the time of Christ during which China was united under a central government and palace eunuchs engaged in perpetual power struggles, Han Dynasty is the first out-of-state location of a well-regarded chain that already has five branches in and around Philadelphia. Think of it as Sichuan filtered through the City of Brotherly Love. This is not necessarily a bad thing, since it produces a new form of Chinese restaurant with certain uniquenesses, slightly different in approach to anything we already have.

It can hardly be described as Sichuan though, since only two-thirds of the dishes even try to be Sichuan, and many of those utilize non-traditional ingredients, such as green bell peppers and Western celery, or fall short of Sichuan food in one regard or another. The expected lakes of chile oil, in particular, are largely missing, and only a small proportion of the dishes jump with ma-la peppercorns.

There's plenty of Cantonese stuff on the menu, as if the restaurant wanted to satisfy customers that were still sitting on the fence as far as spicy food went. There's also a smattering of Hunan and Taiwanese standards, the latter so beside the point that it makes you think the owners must be Taiwanese, and have offered a few of their own favorites as afterthoughts. Interestingly enough, Elmhurst already has at least one restaurant that offers the Taiwanese perspective on Sichuan food — Sweet Yummy House, which Han Dynasty resembles in many regards.

The main part of the menu doesn't so much list dishes as offer categories of cooking, 16 in all, ranging from ones that are obviously Sichuan (Dry Pot Style, Kung Pao Style) to those that are bald-facedly Southern Chinese (Scallion Style, Salt 'N Pepper Style). Finding your favorite dish if you're a longtime fan of Sichuan cooking may prove to be a problem, since the actual dish names are often not listed.

All styles are offered with your choice of several protein sources for each dish. Let me say I dislike this approach to Asian cooking, as if you can dump anything in any recipe and have it turn out just as good. The styles are rated one to 10 on a hotness scale, and though this system is not infallible, you'll find the "10" dishes to be kick-your-ass spicy. 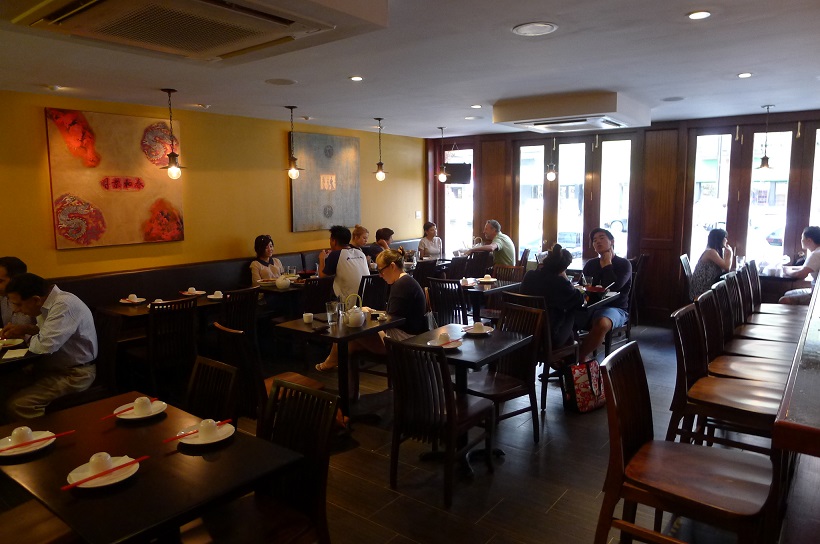 Most of the dishes at Han Dynasty my pals and I tried (seven in all) were quite good, prepared and presented with a certain panache. The dining room is boxy and pleasantly spacious. 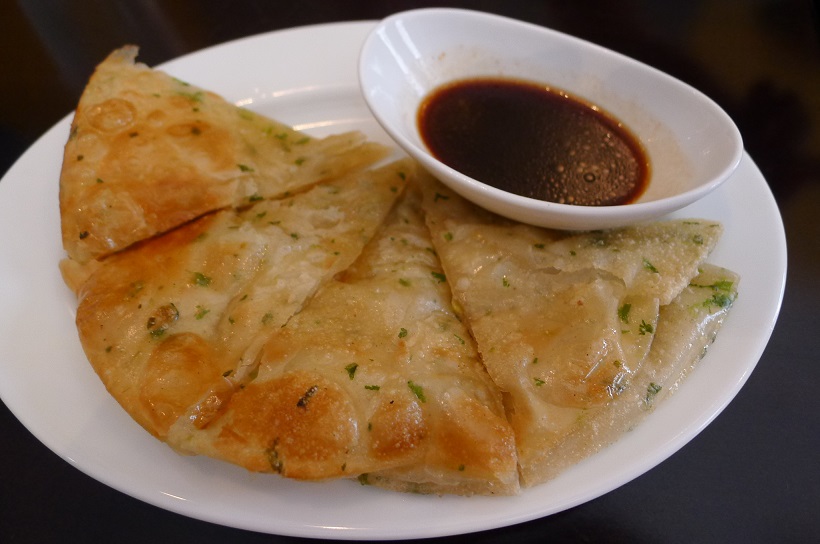 We went for the scallion pancakes ($3.95), not really a Sichuan dish but a northern Chinese one long ago adopted into the Cantonese canon. They were excellent: browned, glistening, and slightly gummy in a good way, served with a sweet soy dipping sauce with a soupcon of black vinegar. 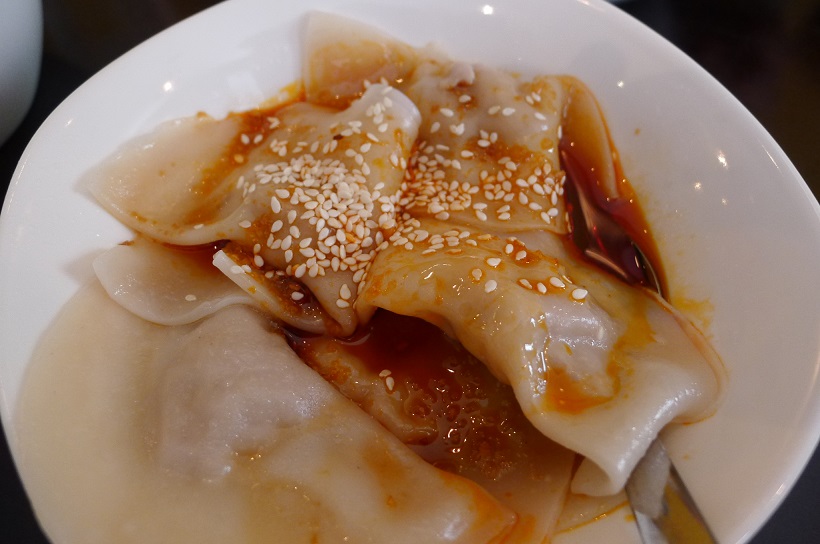 From between two dumpling-in-hot-oil selections, we picked the one rated at the four level of hotness (dumplings in chili oil, $6.95) rather than the one rated six (wontons in chili oil). The chili oil tasted of toasted sesame (it was also garnished with sesame seeds) in a very Sichuan sort of way. 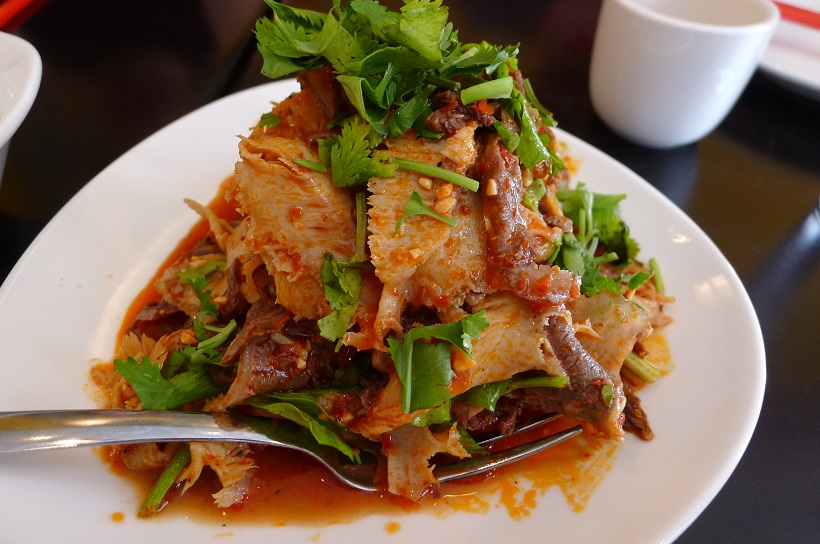 The Sichuan standard cold dish beef and tripe in chili oil ($9.95) was a perfect rendition — shimmering with red chili oil, studded with Sichuan peppercorns, and hot as hell, with crushed peanuts for added crunch. The beef component, though, was not the traditional tongue, but slices of braised beef instead, which did not detract from the flavor-seething heap. 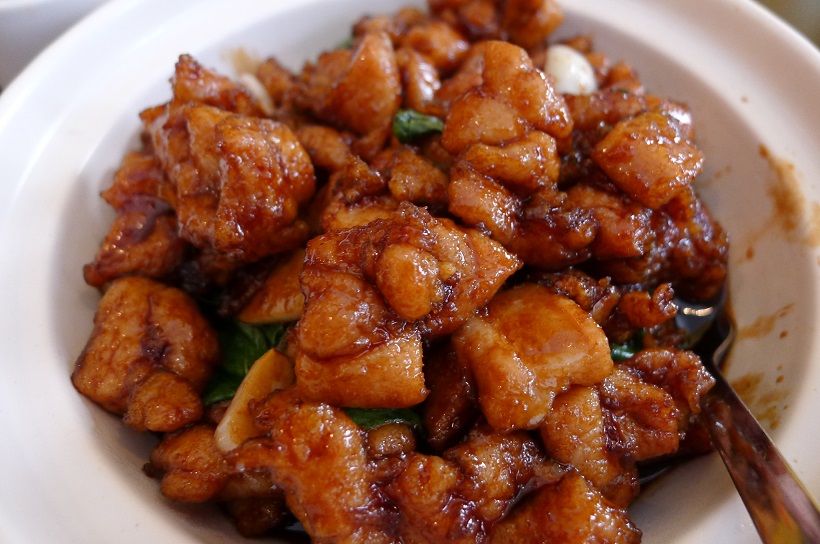 Subversively, we also went for the Taiwanese signature Three Cup Chicken ($14.95) — braised boneless bird chunks flavored with soy sauce and basil leaves, an ingredient rarely seen in Chinese food. The "three-cup" refers to the legendary recipe, which supposedly includes a cup each of soy sauce, rice wine, and sesame oil. This version might have incorporated a cup of white sugar, too, because it was too sweet by a mile. 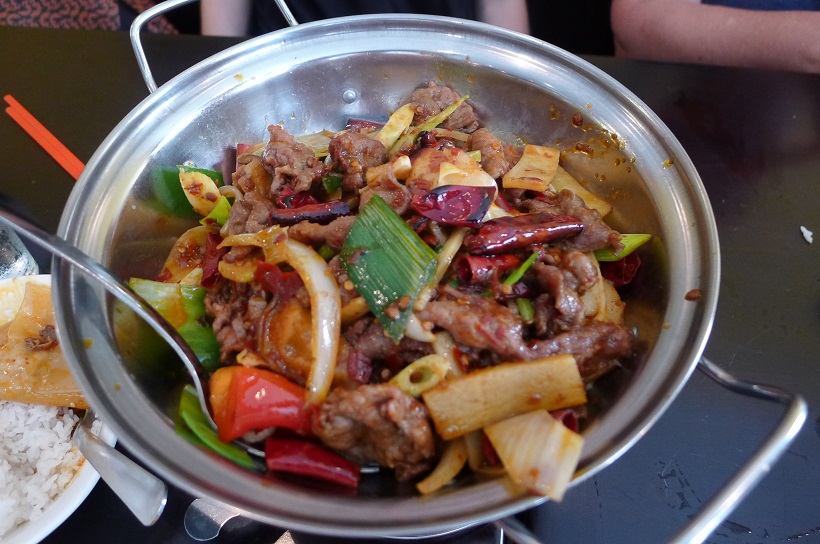 Diving into the 16-part "Styles" menu, we tried the Dry-Pot Style lamb ($18.95). On most Sichuan menus, this would be called lamb with leeks, and indeed there were swatches of leek presented in a baby wok with a Sterno flame flickering underneath. While the hotness didn't quite merit a 10, the dish deserves high marks. 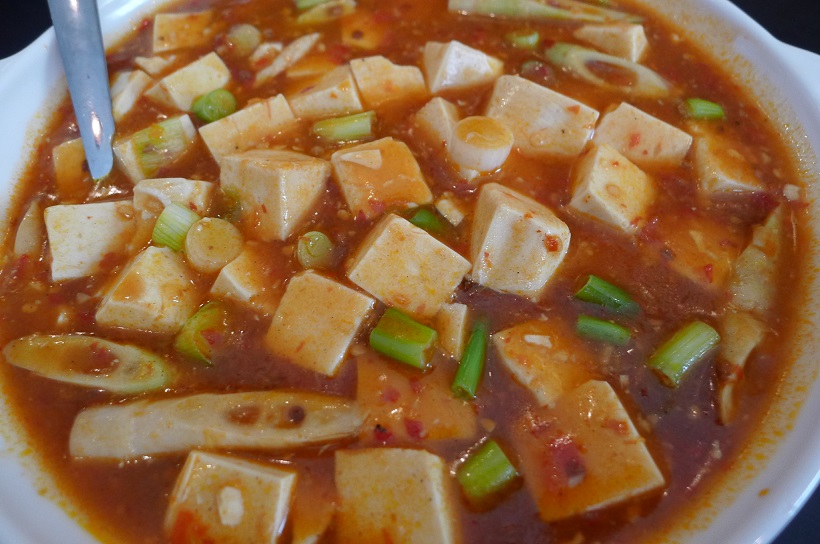 Less interesting was our order of tofu in the "pickled chili-style" ($11.95), which tasted distinctly Hunanese, and was much spicier than its lever of four would suggest. Upon consideration, it tasted and looked like a doctored version of ma po tofu.

In the stampeding world of East Village eats, and with authenticity caveats cast aside like so many paper menus slipped under the door of your apartment, Han Dynasty is a welcome addition to the neighborhood, and yet another place where you can depend on getting a mouth-searing meal. The price may be a few dollars more than the same pile of food from your neighborhood Chinese carryout, but you'll probably find it well worth the price. Still, if given a choice of going to Hot Kitchen or Han Dynasty for actual Sichuan food, I'd probably pick the former.