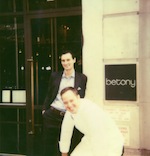 Bryce Shuman has a bit of a Polaroid obsession. The chef recently turned his vintage cameras on Betony, to document the opening and day-to-day life at the restaurant. He posts the best of the bunch on Betony's Tumblr, and warns: "If you step into the kitchen after a meal, you are more than likely going to have your picture taken." [The Impossible Project, Tumblr]

By Luke Fortney and Ryan Sutton