Isaan refers to the plateau that dominates the northeastern part of Thailand, hemmed in by Laos and Cambodia. The region is also bordered on the east by the fish-rich Mekong River. Ever since Woodside's Sripraphai debuted 20 years ago, Isaan food has been seeping into New York Thai menus, till it has become a dominant force at many of the city's most popular Siamese eateries. While we've experienced this regional cuisine from the perspective of Thai immigrants before, and from that of a chef-backpacker from Oregon, what would it be like to have a real restaurant from Isaan itself set down here as if by spaceship? The partial answer to that question is found at Somtum Der. 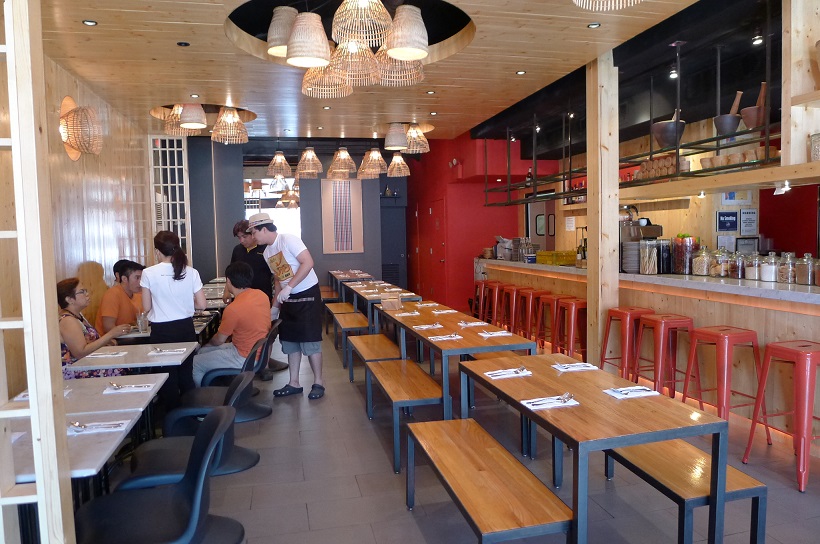 I was excited about the imminent East Village opening but assumed it was still a week or two away when I found myself passing by on the way to the Greenmarket yesterday. Lo and behold a chalk signboard had appeared outside advertising a "Soft Opening," so I immediately scrambled inside. The room is modern-looking and nearly free of ethnographic trappings such as gold-headdress statuettes and carved wooden bas reliefs. Blond woods accent gray-painted walls and recessed light fixtures in the ceiling resemble wicker baskets. Seating is provided on high stools along a counter that looks into a narrow open kitchen, while two lines of tables run parallel. A few stools along an eating ledge look out across the street at a Con Ed transformer farm. Beer and wine are available. 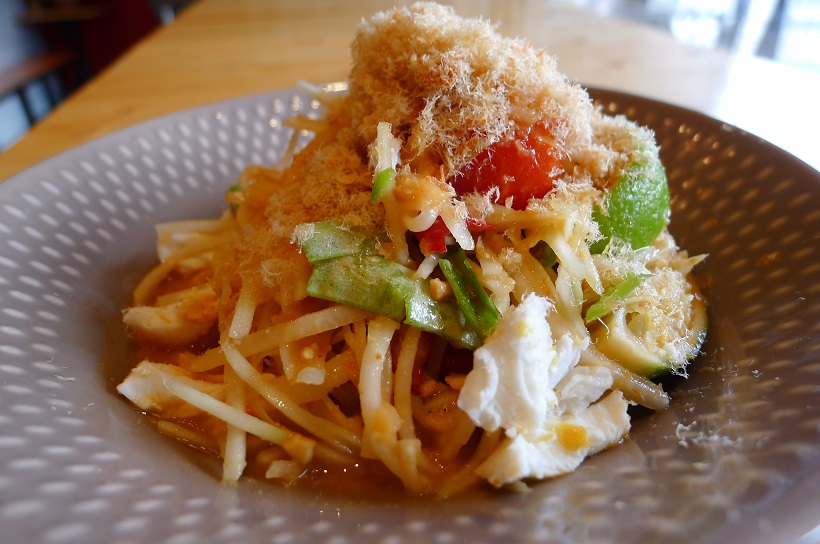 Located on what remains a hardscrabble stretch of Avenue A (two homeless men snoozed in the doorway as I entered), the name of the new place refers to the shredded green-papaya salad that has long served as the gateway drug to Isaan food in NYC. Indeed, there are a mind-boggling eight versions of somtum here. I ordered the flagship, a version that incorporates brine-preserved chicken eggs that develop an agreeably creamy flavor. The salad ($11) was mellower than I've tasted before, swimming in a sweetish orange dressing, the tendrils of papaya more soft than crunchy. You really ought to order some sticky rice to mix with the dressing. Other somtums showcase fermented fish sauce and baby crabs, grilled pork neck meat, and Thai-caught mackerel. There's a vegetarian rendition, too.

The 43-item menu – illustrated with studio-quality color photographs – is totally curry-free. It also lacks the basil-dominated stir-fries found on most Thai menus. Indeed, it sports a much higher proportion of Isaan dishes than any other place in town, enough to call itself an Isaan restaurant. It's the first branch of a restaurant back in Thailand, as the young bespectacled manager told me – also mentioning that he was born and raised in the Isaan province of Khon Kaen. 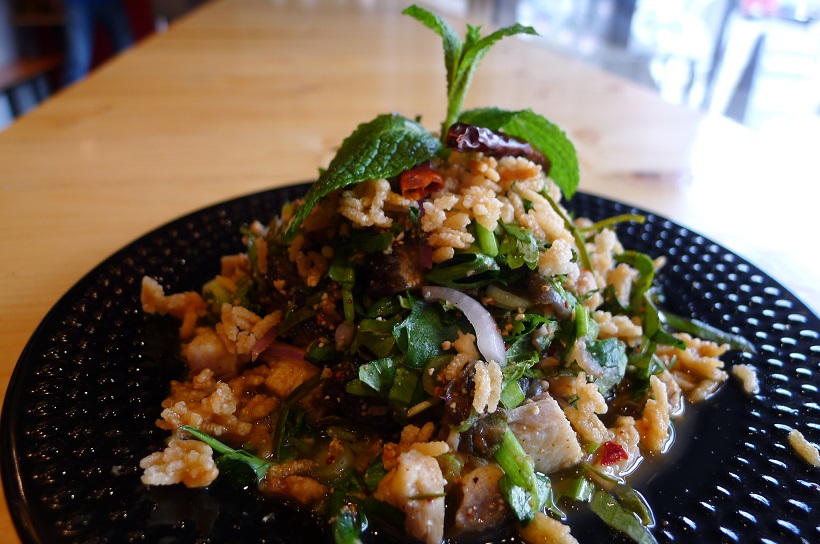 There are fried bar-snacks aplenty, including sausages and jerkies; noodles, some Chinese-leaning; larb salads in multiple permutations; a couple of grilled meat preparations; and several versions of fried rice. Notably absent are gai yang, a famous Isaan grilled chicken rarely done well here (a breaded and fried version is available), and amok, a sensational orange fish mousse found at Chao Thai and Uncle Boons.
I also tried a catfish larb ($13) that deployed lozenges of fresh fish, mild and boneless, rather than the funky dried catfish sometimes found in Queens. Flinging off the scent of mint, the salad also contained toasted rice, which crunched. At one point the waitress sidled up to me, brow wrinkled, and asked if the dish was too hot. It was not nearly as hot as some of the fiery larbs found in Elmhurst and Red Hook, leading me to suspect the management may have underestimated Gotham's tolerance for chiles. Hopefully, this will be corrected as the soft opening proceeds. Or maybe the customers at the restaurant in Thailand prefer less heat. 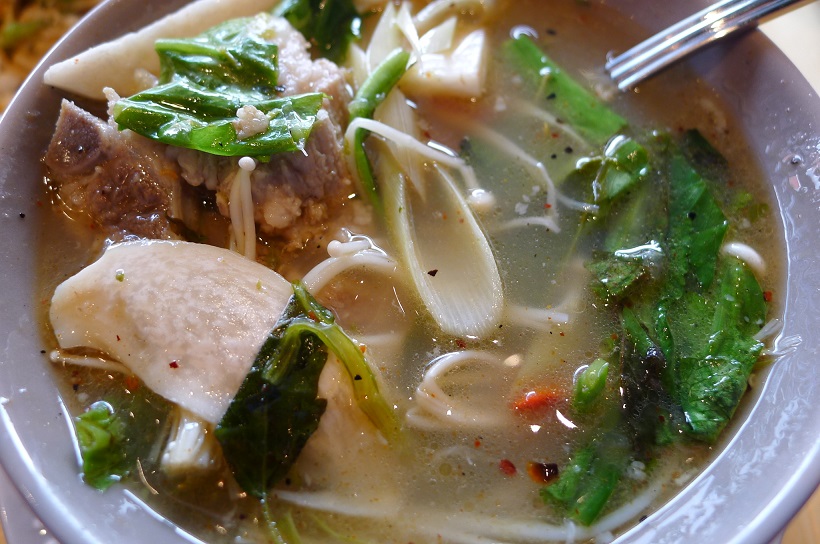 The best dish I sampled astonished me. Tom Saam Kradook On ($12) is humbly described as "spicy Isaan pork cartilage soup." It's more like a nuclear explosion in the pig sty at an herb farm. Besides floating hunks of bony and meaty pork, and some wonderful oozy tendon, plus two kinds of mushrooms, the main constituent of the potage was fresh herbs of such pungency, that every sip left me nearly breathless. Lemon grass, sawtooth cilantro, and kaffir lime were only three of the flavorings found in the soup's depths, undulating in the eddies of a powerful and opaque pork broth that reminded me of Japanese tonkotsu. You may be mildly annoyed by the stalks of lemongrass you end up fishing out of your mouth, but the total effect of this soup – which also hides some incendiary red Thai bird chiles – is well worth it.

So, is this version of Isaan cuisine more authentic than those at, say, Sripraphai or Pok Pok? Authenticity is always a dangerous concept, but let's just say this version, along with that of the other two places, will give you a clearer picture of what Isaan food is like. Somtum's rendition is an upscale take on the cuisine as served in a Bangkok restaurant — which is also at least partly true of the food at Ayada in Elmhurst. Compare and contrast. When it comes to Isaan, you can never have too many versions.