A First Look at Ken Oringer and Jamie Bissonnette's Toro

Share All sharing options for: A First Look at Ken Oringer and Jamie Bissonnette's Toro

It was 15 months ago that news surfaced like a sperm whale rising out of the ocean that Ken Oringer and Jamie Bissonnette, Boston's chefly Dynamic Duo, were going to open a branch of their hit tapas joint Toro in New York. Imminently. A friend and I soon shot up there to check out the Boston original to get the jump on other New Yorkers. Wondering, how will the pair position themselves in what was already a crowded New York tapas market?

We arrived to find Toro so mobbed that we despaired of the two-hour wait, so we went to Oringer and Bissonnette's other restaurant instead. Located in Boston's South End, a neighborhood strikingly like Red Hook, Coppa is an Italian enoteca whose weirdo-but-delicious specialty is a pizza topped with bone marrow and swatches of roast beef heart. It's a million times better than its sounds. There were pastas, slices of coppa (a neck-meat ham beloved of Italian-Americans), composed salads featuring beans, and all the other tropes of the modern Italian restaurant, with lots of organ meat tossed in for good measure. These included a novel pig-ear terrine dotted with chives and crunchy bread crumbs, a kind of Fergus-meets-Mario situation, and altogether wonderful, considering you weren't in New York or Florence, where such food thrives. 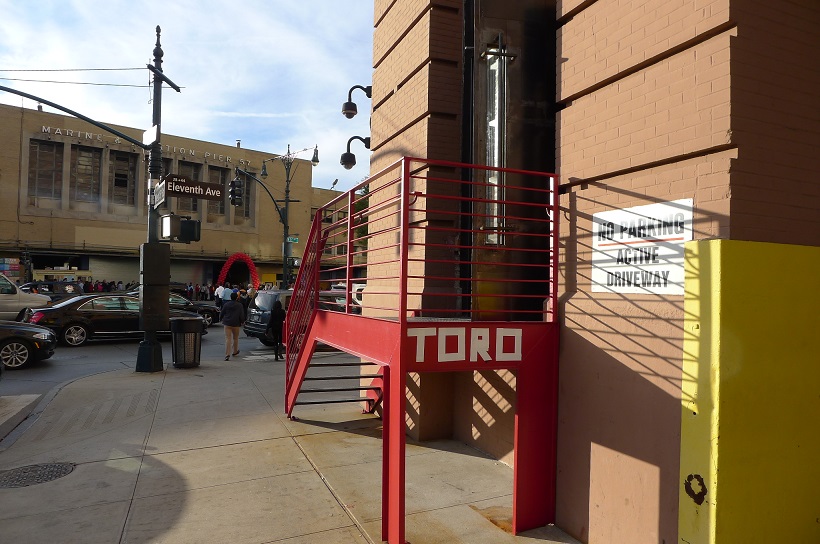 Fast forward 15 months and I'm standing on the sidewalk with the same friend in front of Del Posto wondering where the hell Toro is. The building is 85 Tenth Avenue, another of the stately Nabisco factories that define this corner of Chelsea. A chance conversation on the sidewalk told us the restaurant wasn't along the row of restaurants facing 10th Avenue, nor inside 85's main door, but way around the corner and down the street on the Eleventh Avenue side of the building, heralded only by a sign made of masking tape affixed to a red-metal exterior stairway. Soon everyone will know where it is.

Why? Because my meal there was absolutely fantastic. How to diddle with the tapas canon for jaded New York palates? Expand it. Thus, out of an ambitious 59 dishes in five categories (not counting three desserts), you'll find not only regional Spanish fare (Catalan, Basque, Galician), but plenty of Moroccan and even some Italian stuff, too. And the chefs play fast and loose with organ meats, from a list that includes tripe, blood sausage, beef heart, smoked tongue, and the same pig-ear terrine we encountered at Coppa, along with such oceangoing arcana as sea urchin, blow fish, cuttlefish, sea beans, and salt cod toasts (also borrowed from the Coppa menu). 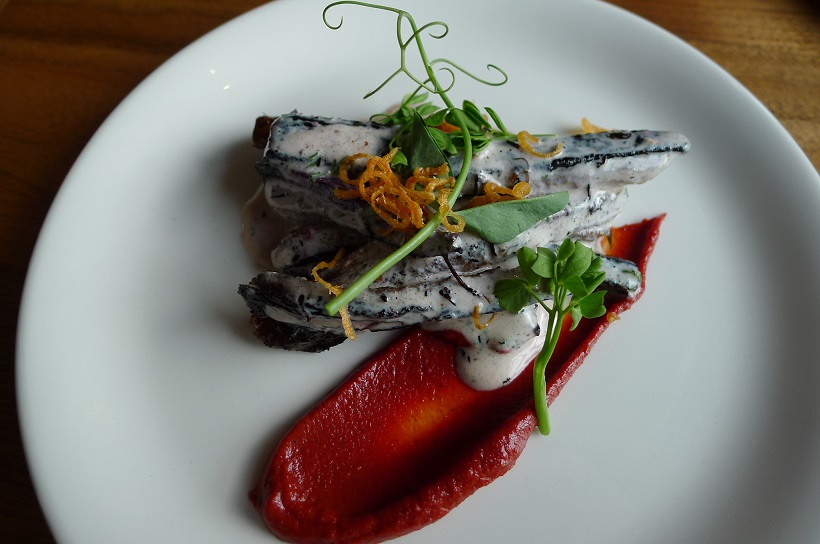 [Heirloom carrots]
What's more, the proportion of vegetables — perpetual lady pleasers — is unusually high for a tapas bar. From the section "Tapas a la Plancha," my date and I enjoyed a plate of purple heirloom carrots ($12), nicely cooked to dente and pooled with a buttermilk dressing that had mixed dill and almond flavors, with a thick schmear of harissa, the Arab hot paste. The miracle was that the root vegetable still tasted like a Spanish tapa. In a similar lively vein, but in the Tapas Frias y Jamones section, was a supposedly Catalan mush of smoked eggplant and pimentos, this time flavored with cumin. It was superb. But make sure you ask for bread to go with it. The bread is a necessity to sop up stray sauces and particulate matter, but you have to insist on it. 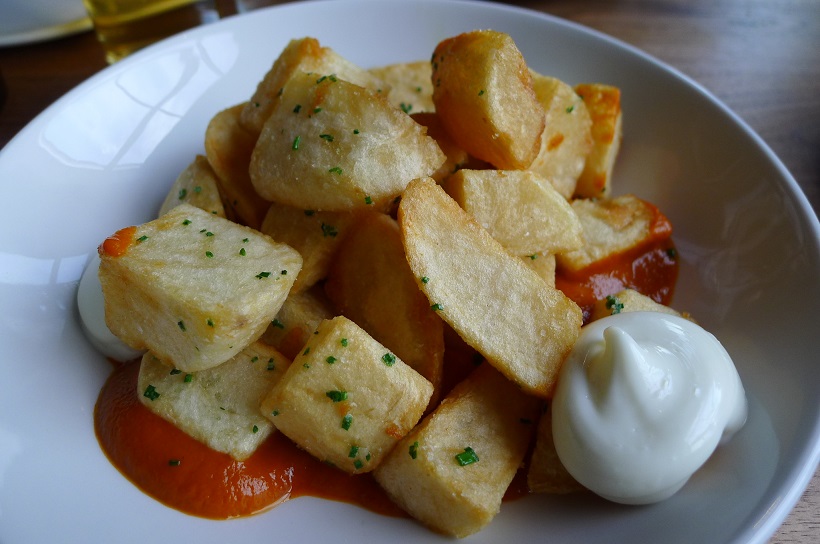 [Patas bravas]
Hopping around the menu, we loved the generous bowl of patas bravas ($9), a tapas bar standard of fried potatoes squirted with red pepper paste that wasn't quite spicy enough, and some of the lightest allioli you'ver ever tasted. 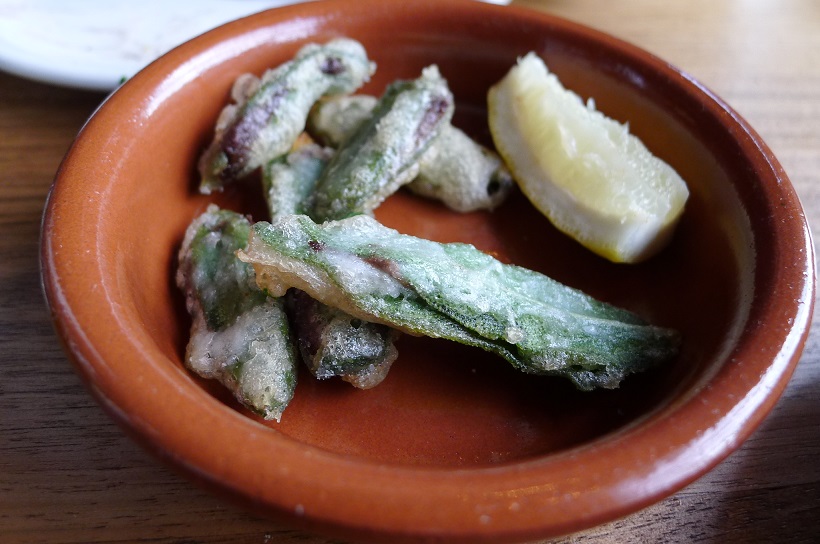 [Sardine]
The sardine was good, too, but arrived a tad undercooked. 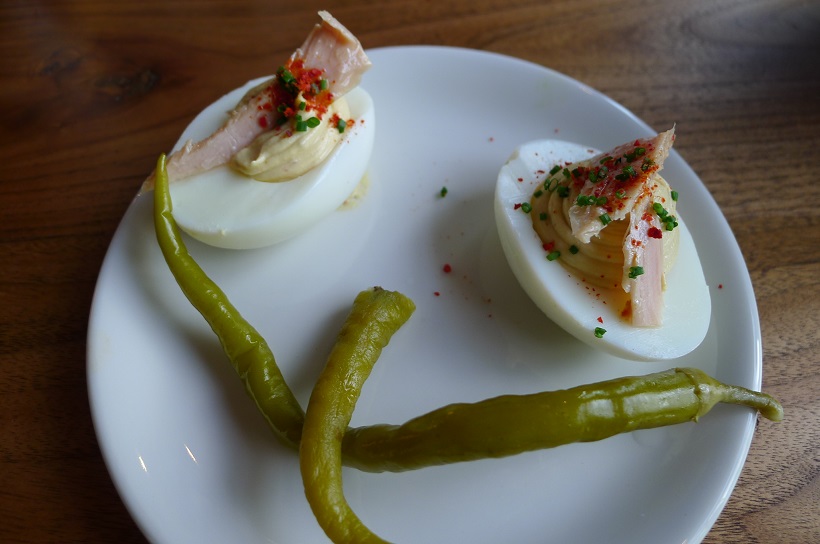 [Deviled eggs]
The deviled eggs came planked with good canned tuna and sided with sinuous pickled peppers, altogether delightful, a throwback to the '60s, like something James Beard might have served at a luncheon; while a tripe stew with beans and thick rounds of blood sausage had altogether too little tripe, but made up for it in quantity of sausage. (Once again, we'd tasted something similar at Coppa.) 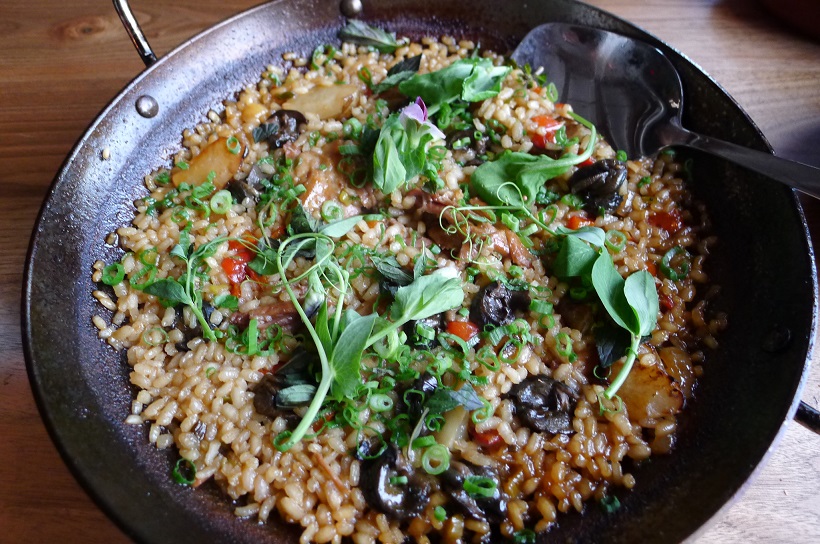 [Paella]
Centerpiece of the menu are a series of paellas available in half or full orders, of which a half is enough for four to get a good taste, given the extreme richness of the dish. These arrive in small paelleras, which is brilliant since the best parts are the crunchy bits you scrape from the bottom of the pan. We chose one featuring bunny and snails ($30/$60), which was like a warm afternoon in a verdant Spanish garden. 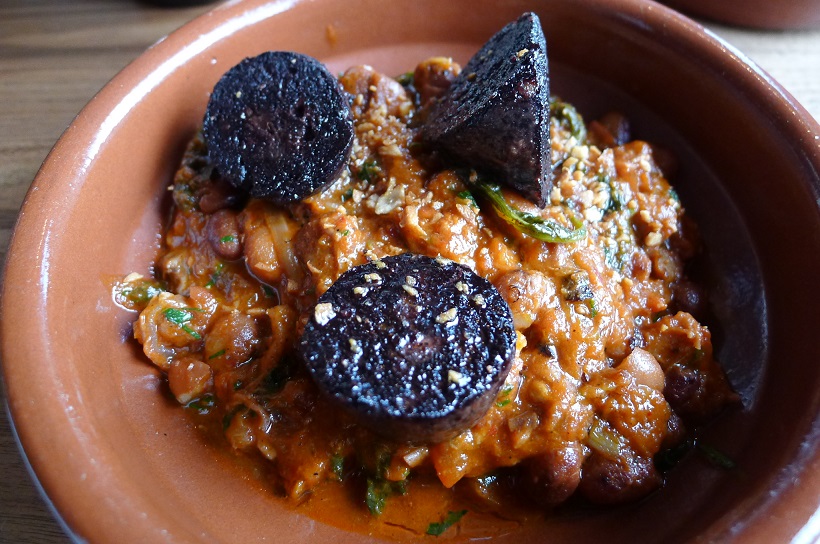 [The tripe and beans]
There are some nice white and red wines by the glass ($12), a handful of beers, and a by-the-bottle wine list that gets serious around $50. Go early, and you'll be glad the restaurant is at the ass-end of the building, as the rustic, high-ceilinged room clad in brick and distressed woods turns golden in the setting sun.